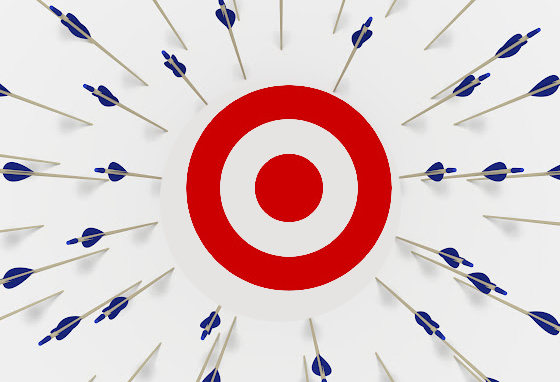 Last week was brutal for retailers as major earnings announcements showed how they have been hit very hard by huge cost increases. Wal-Mart started the week off shocking the market with its very weak earnings outlook and then there was Target.

Its stock price got absolutely crushed in the wake of its results being released. 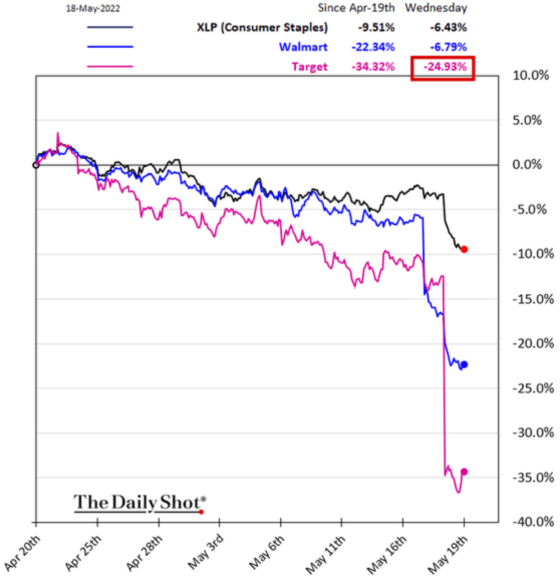 The stock market has been suffering mightily in 2022 as this drawdown is one of the larger ones since 2010. 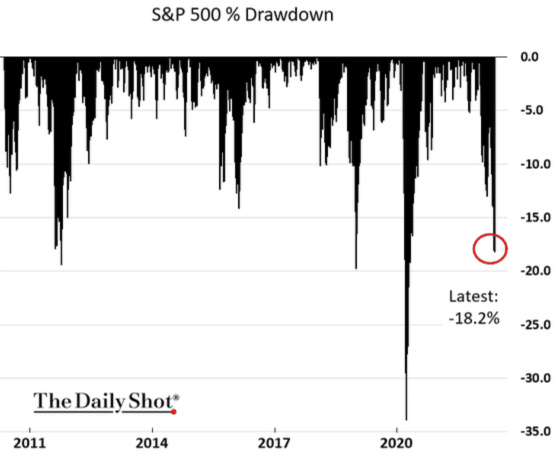 It seems pretty clear that the Fed has no problem inflicting pain on investors in order to tighten financial conditions to curtail demand in the economy so that inflation can be tamed. The following are excerpts from an interview done by Kansas City Fed President Esther George. 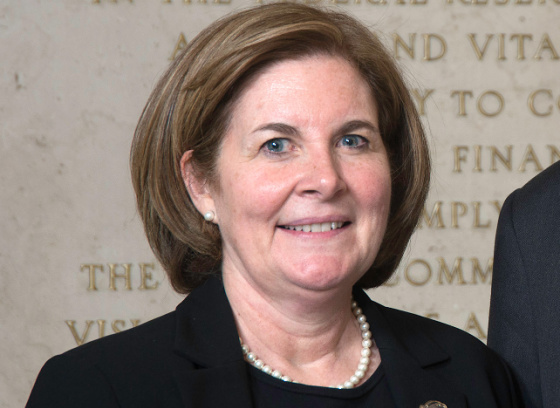 The Fed clearly has its eye on the stock market.

“What we’re looking for is the transmission of our policy through markets understanding and that tightening should be expected. It is not aimed at the equity markets in particular but I think it is one of the avenues through which tighter financial conditions will emerge”

George then added that,

“right now, inflation is too high and we will need to make a series of rate adjustments to bring that down,”

“We do see financial conditions beginning to tighten so I think that’s something we’ll have to watch carefully. It’s hard to know how much will be needed.”

There’s an interesting argument that inflation affects everyone while unemployment only impacts a small percentage. As a result, if it takes a recession to bring inflation down then so be it as that will be for the greater good. One can see that unemployment is not the primary concern of the Fed anymore.

And if a Fed is ok with inducing a recession, then it looks like the stock market is in for more pain if history is any guide.Click To Tweet 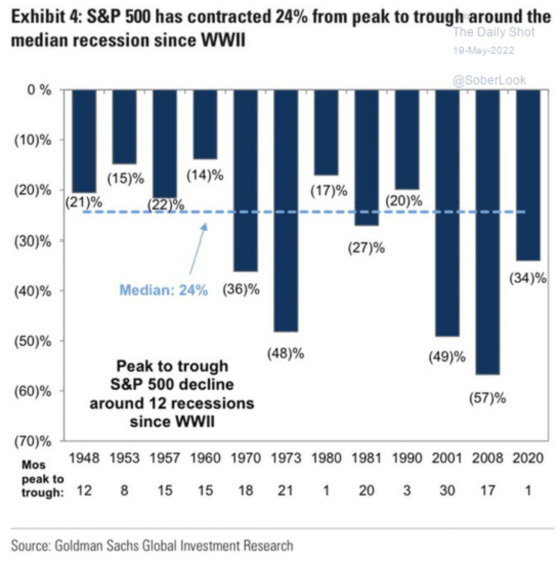 Collateralized Loan Obligations (CLOs) have been a very hot area for firms to access money. Much of the acquisition capital in the apartment industry over the last year has come from lenders who make loans to apartment owners and then package them up to be sold as securities to investors. There is no question that this capital has fueled an explosion in apartment acquisitions, as well as other non-real estate company purchases over the last year or two. This chart shows how annual CLO issuance in the U.S. has been really strong over the past couple of years. 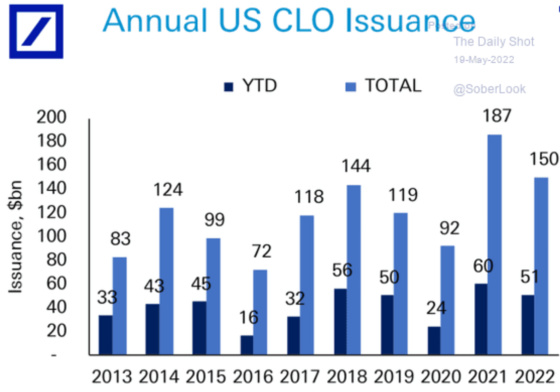 And this one shows how apartment acquisition activity, particularly portfolio purchases which are overwhelmingly financed using CLO debt, has exploded over the past year or so. 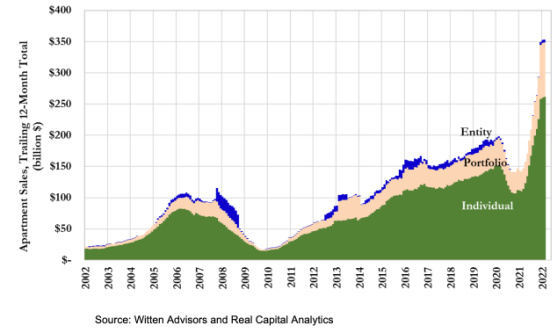 With the Fed on a very aggressive tightening path and wanting to inflict financial pain by making credit more costly and difficult to access, CLO spreads are widening. We are seeing this in the apartment industry as the cost of debt has gone way up and lenders are pulling back which is impacting pricing for apartment assets. 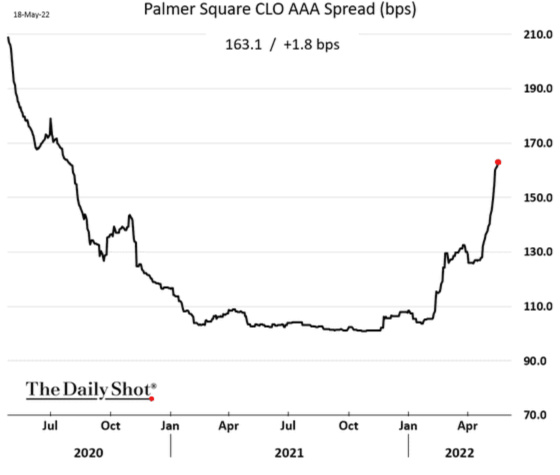 Another area of the economy that is impacted by higher rates is housing. Mortgage rates have gone up at a very rapid rate. 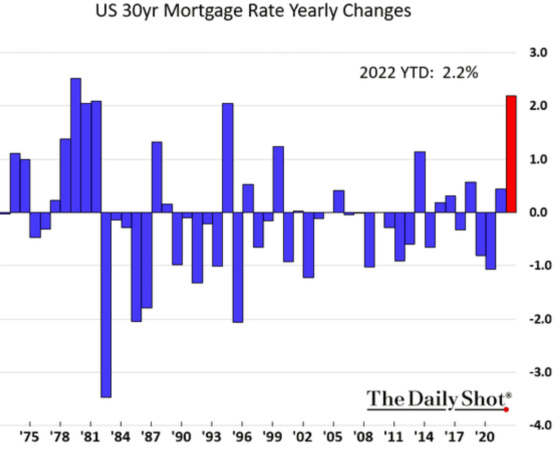 Refinance activity has plummeted, which isn’t surprising given that most homeowners with mortgages have rates that are lower than what’s now available in the marketplace. 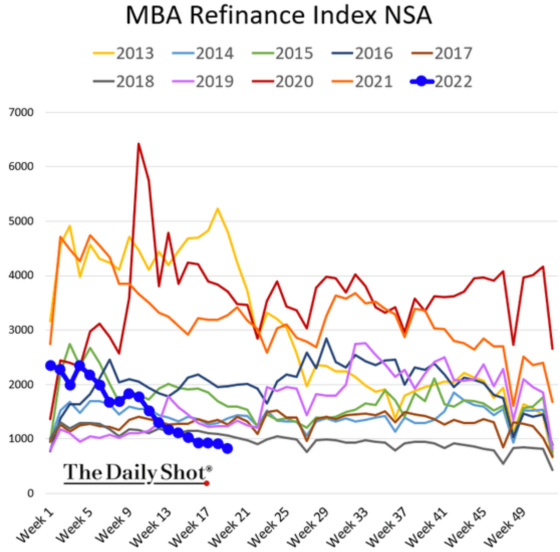 Housing has become much less affordable given the very strong appreciation of home values and higher rates. 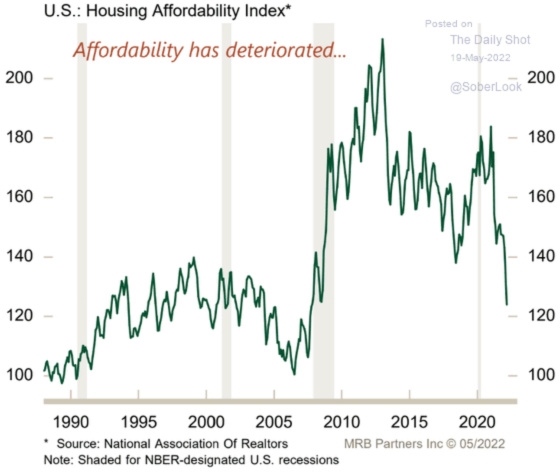 Demand appears to be cooling off a bit. 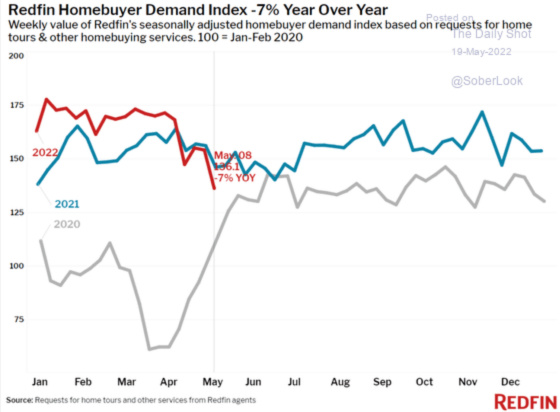 Listings are starting to finally get to the point where they should be growing year over year.

Shipping and transportation costs were the main culprits for Target and Wal-Mart’s earnings misses. Unfortunately, without significant demand destruction, it looks like gas and diesel costs will remain elevated as the following charts show. 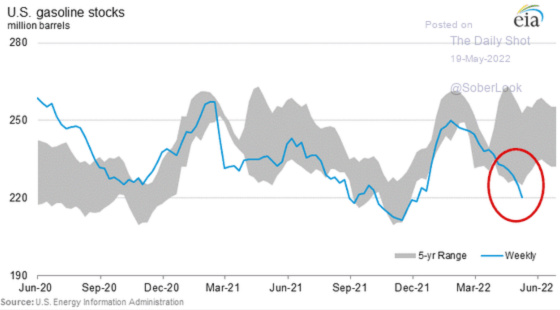 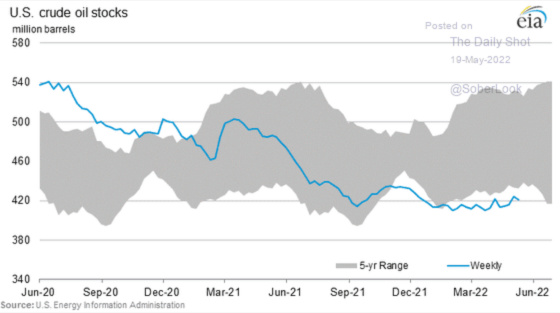 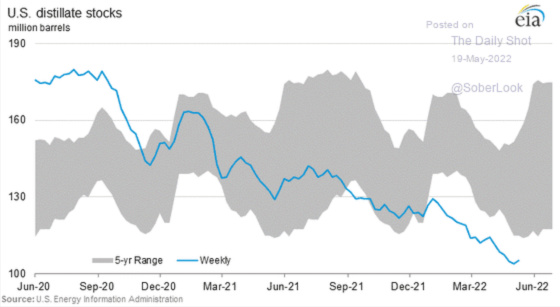 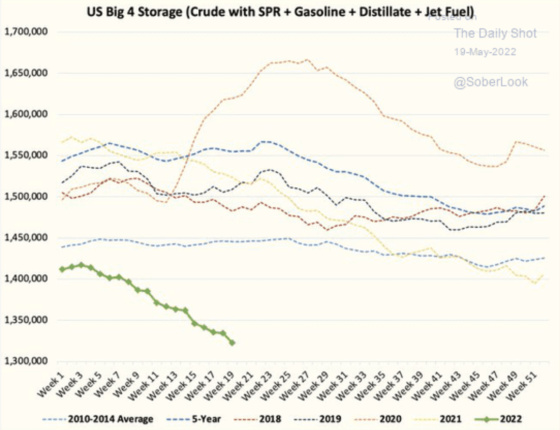 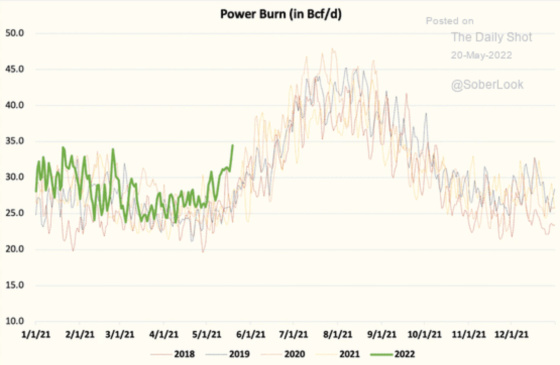 The United States is exporting a tremendous amount of refined product. 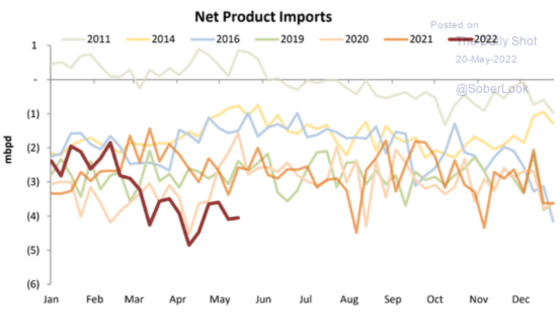 The combination of higher demand and more supply being exported has led to very high natural gas prices, along with oil, and gasoline. 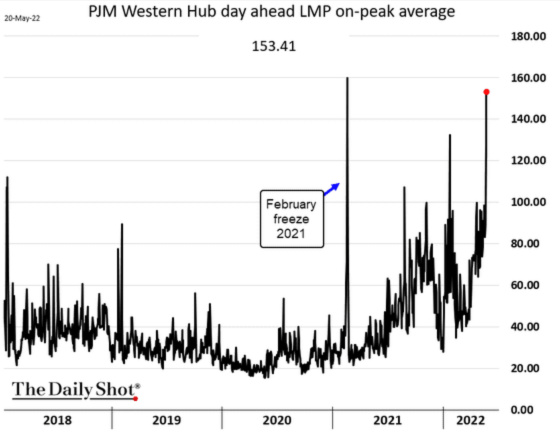 All of this is weighing on the outlook of manufacturers who clearly are expecting a slow down if the recent manufacturing outlook from the Philadelphia Fed is any indication. 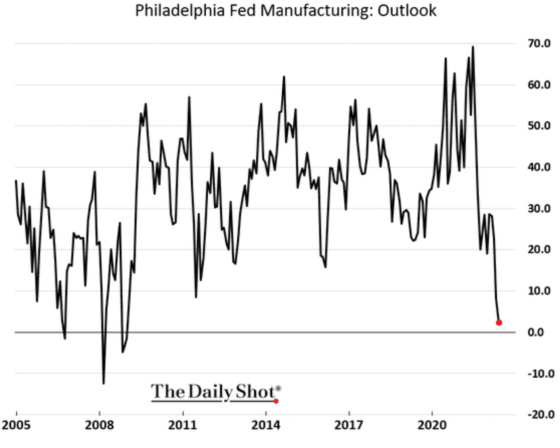 Manufacturers expect that most of their unfilled orders will be taken care of in the coming months. 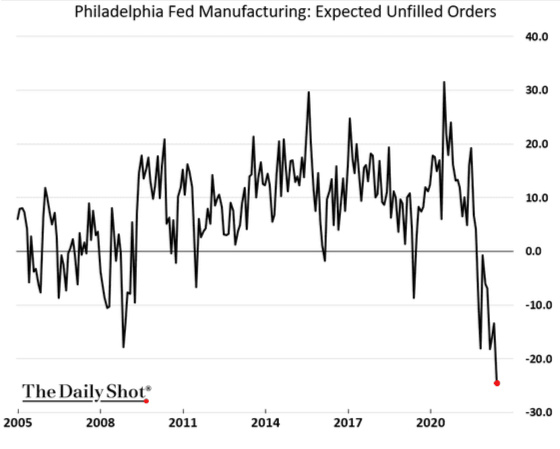 Given the subdued future outlook, manufacturers are not very excited about spending money on capital expenditures. 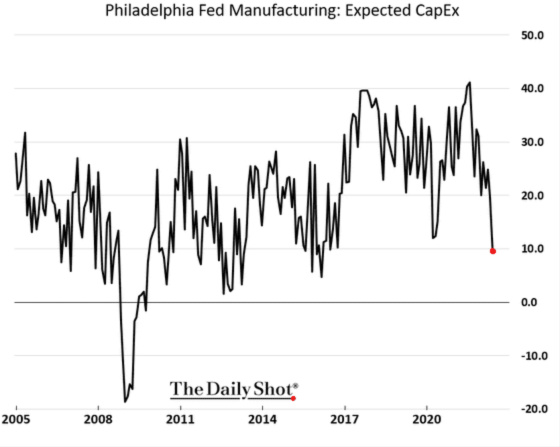 Bond investors are now sensing a slowing economy that the Fed is not inclined to stop. This has pushed inflation expectations down.

The shift in inflation expectations has brought 10-year Treasury yields down as well.

The Fed argued last year that inflation was transitory but had to admit that it was wrong as inflation only got worse and became more pervasive. And now it is on an aggressive path to tighten credit and raise short-term interest rates. It’s very possible that long-term bond investors are coming around to inflation actually being transitory now that the Fed is showing firm resolve to fight it. This is leading to company earnings on the path to being very off target which will most likely lead to cost-cutting, a less robust labor market, and consumers being more restrained in their spending at the same time that the cost of credit is going up for businesses and individuals.