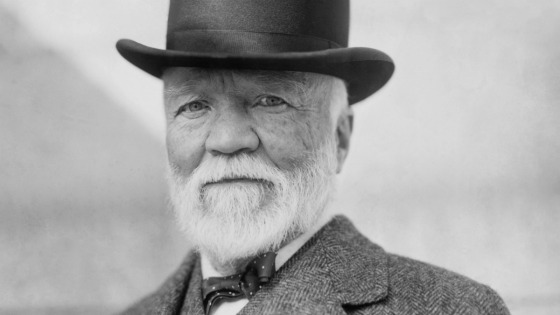 I recently read Andrew Carnegie’s autobiography and found it so compelling that I’m going to focus the next few blog posts on some areas of insight and wisdom that I think all investors, business people, and wealthy individuals, in general, could benefit from.

Carnegie was born November 25, 1835, and emigrated from Scotland to Pittsburgh with his family when he was in his teens. It is truly a true rags to riches story and one that has benefited society greatly due to his extraordinarily generous and focused philanthropic efforts. By the time he died in 1919, it is estimated that he gave away approximately $350 million, which is many billions in today’s dollars. I will focus on his extraordinary philanthropic contributions in another post. For this week I’m going to concentrate (pun intended) on Carnegie’s relentless focus.

Charlie Munger has talked over the years about the benefits of being invested with a hyper-focused fanatic like Sam Walton or the founder of National Cash Register John Henry Patterson. Of Patterson, Munger said,

“[h]e was a very intelligent man and a fanatic, all of whose passions were dedicated to the cash register business.”

And when you match a fanatic with a company in an industry with great growth fundamentals, then you have the makings of a terrific investment. One mistake Patterson made was firing T.J. Watson who went on to found IBM. He did this by leaving his desk on the lawn for Watson to see when he returned to the office. Apparently, Patterson was a very peculiar and mercurial man.

Carnegie was one of those fanatics, but a much more well rounded and philosophical individual who truly saw the bigger picture when it comes to serving a greater good. Carnegie’s focus proved to be not only valuable to him financially but emotionally as well. I will quote liberally from Carnegie’s writings because his experience and advice are timeless and best communicated directly by him than me paraphrasing him.

Munger believes that concentrating one’s investment is actually the safest route if one has his or her capital in outstanding companies for the long-term and one does not care how one is doing relative to his or her peers. As Munger says, envy is the worst of the seven sins because you get no pleasure from it, unlike the other ones. Concentrated investing can lead one to sidestep emotionally-charged investment decisions and result in having one’s capital stored in the securities of great companies that are leveraged to growth. Carnegie shared a similar philosophy as Munger..

I like to say that one of the benefits of investing with CWS is that we help save investors from themselves because we deploy their capital in illiquid apartment investments so our investors essentially delegate the sale decision to us. They have to make the buy decision by investing with us but after that we are the ones that have to deal with the ups and downs of managing these businesses and monitoring market conditions. The illiquidity necessitates patience and the lack of real-time pricing eliminates a powerful stimulus to making fear-based decisions and exiting prematurely.

Much of what Carnegie says about focusing one’s time, talent, and treasure in that which they control and know best resonates greatly with us at CWS since we are big believers in that philosophy.

Carnegie had some early experience investing in stocks and like most of us found the emotional roller coaster hard to handle and quite distracting. So what did he do? He decided to never invest in tradable securities again.

“In those early days, however, I had several interests that were taken over in the course of business. They included some stocks and securities that were quoted on the New York Stock Exchange, and I found that when I opened my paper in the morning I was tempted to look first at the quotations of the stock market. As I had determined to sell all my interests in every outside concern and concentrate my attention upon our manufacturing concerns in Pittsburgh, I further resolved not even to own any stock that was bought and sold upon any stock exchange. With the exception of trifling amounts which came to me in various ways I have adhered strictly to this rule.”

Invest In What You Know

Carnegie believed his approach, given his experience, was the right thing for all professionals, especially those in manufacturing. By avoiding the casino of the stock market we can eliminate the emotional impact of real-time price changes on our psyche and the negative effects of that while also taking advantage of the opportunities that arise when we see the world entirely through the prism of investing in ourselves and the businesses we control if we are in that position.

“Such a course should commend itself to every man in the manufacturing business and to all professional men. For the manufacturing man especially the rule would seem all-important. His mind must be kept calm and free if he is to decide wisely the problems which are continually coming before him. Nothing tells in the long run like good judgment, and no sound judgment can remain with the man whose mind is disturbed by the mercurial changes of the Stock Exchange. It places him under an influence akin to intoxication. What is not, he sees, and what he sees, is not. He cannot judge of relative values or get the true perspective of things. The molehill seems to him a mountain and the mountain a molehill, and he jumps at conclusions which he should arrive at by reason. His mind is upon the stock quotations and not upon the points that require calm thought. Speculation is a parasite feeding upon values, creating none.”

I would assert that what Carnegie wrote still applies and will always be relevant. So what was Carnegie’s antidote? He decided to go against conventional wisdom by eschewing diversification just like Munger has espoused.

“I had become interested, with my friends of the Pennsylvania Railroad Company, in building some railways in the Western States, but gradually withdrew from all such enterprises and made up my mind to go entirely contrary to the adage not to put all one’s eggs in one basket. I determined that the proper policy was “to put all good eggs in one basket and then watch that basket.”

Carnegie chose to focus on the part of his mind and life dedicated to business completely on his steel-making enterprise by becoming the master of his trade.

“I believe the true road to preëminent success in any line is to make yourself master in that line. I have no faith in the policy of scattering one’s resources, and in my experience I have rarely if ever met a man who achieved preëminence in money-making— certainly never one in manufacturing— who was interested in many concerns. The men who have succeeded are men who have chosen one line and stuck to it. It is surprising how few men appreciate the enormous dividends derivable from investment in their own business. There is scarcely a manufacturer in the world who has not in his works some machinery that should be thrown out and replaced by improved appliances; or who does not for the want of additional machinery or new methods lose more than sufficient to pay the largest dividend obtainable by investment beyond his own domain. And yet most business men whom I have known invest in bank shares and in far-away enterprises, while the true gold mine lies right in their own factories.”

Carnegie came to realize that no one could manage his capital more effectively than he could.

“I have tried always to hold fast to this important fact. It has been with me a cardinal doctrine that I could manage my own capital better than any other person, much better than any board of directors. The losses men encounter during a business life which seriously embarrass them are rarely in their own business, but in enterprises of which the investor is not master. My advice to young men would be not only to concentrate their whole time and attention on the one business in life in which they engage, but to put every dollar of their capital into it. If there be any business that will not bear extension, the true policy is to invest the surplus in first-class securities which will yield a moderate but certain revenue if some other growing business cannot be found. As for myself my decision was taken early. I would concentrate upon the manufacture of iron and steel and be master in that.”

CWS has over 800 individual investors, a number of whom have invested with us for over 25 years. It’s fascinating to go back and study what has happened to their investments over such a long period of time. It confirms some of the benefits of having patient capital deployed intangible businesses that serve a basic need like apartments, prosper from the natural growth of the United States economy over long periods of time, can be prudently leveraged, produce dividends, and have favorable tax benefits. Our investors have been able to compound their capital over long periods of time while also receiving dividends that in many instances have more than exceeded their original capital invested. From these very tangible examples, I see how Carnegie’s and Munger’s philosophy of patient, carefully managed, concentrated investing can literally pay tremendous dividends over a long period of time.

While most of us are not business owners, we all have the opportunity to focus our time and talent in our careers where we have the highest payoff potential. While I know that concentrated investing espoused by Carnegie and Munger may not be for everyone, I do believe that we should put ourselves in the position of being able to focus our minds and emotional energy in those areas where we can add the most value and accrue the highest corresponding returns. This would be investing in ourselves through continuous learning and becoming a master of our trade. And if this ends up producing financial rewards leading to the accumulation of investment capital then I suggest either delegating it to others you trust or deploy it in ways that will not interfere with your focus in the areas in which you can create the most value. I cannot overemphasize the high return on serenity because absent a cool, calm, collected approach when it comes to investing we are highly susceptible to catastrophic error and the permanent loss of capital.

Thank you, Mr. Carnegie, for another reminder of the benefits of staying calm by staying focused.

Have you read Andrew Carnegie’s autobiography? Do you agree that return on serenity is imperative?