Benefits of Philanthropy - Give it Away Now..or Later 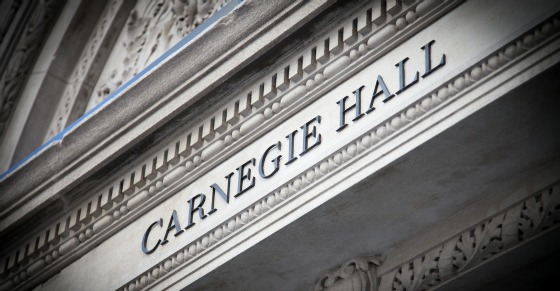 I was in New York City in 2015 and stayed near Carnegie Hall which is fitting since I wrote about Andrew Carnegie last week and plan to continue with discussing him again this week. Carnegie Hall is one of the great legacies he left behind. Despite being in one of the premier locations in the world and having such a rich history, Carnegie Hall almost became a has-been and was forced to be taken over for $5 million in 1960 by a newly-created non-profit entity after the New York Philharmonic moved to Lincoln Center and most people did not think that New York could support two symphonies. According to Wikipedia:

The hall was owned by the Carnegie family until 1925 when Carnegie’s widow sold it to a real estate developer, Robert E. Simon. When Simon died in 1935, his son, Robert E. Simon, Jr., became an owner. By the mid-1950s, changes in the music business prompted Simon to offer Carnegie Hall for sale to the New York Philharmonic, which booked a majority of the hall’s concert dates each year. The orchestra declined, since it planned to move to Lincoln Center, then in the early stages of planning. At the time, it was widely believed that New York City could not support two major concert venues. Facing the loss of the hall’s primary tenant, Simon was forced to offer the building for sale. A deal with a commercial developer fell through, and by 1960, with the New York Philharmonic on the move to Lincoln Center, the building was slated for demolition to make way for a commercial skyscraper. Under pressure from a group led by violinist Isaac Stern and many of the artist residents, special legislation was passed that allowed the City of New York to buy the site from Simon for $5 million (which he would use to establish Reston, VA), and in May 1960 the nonprofit Carnegie Hall Corporation was created to run the venue. It was designated a National Historic Landmark in 1962

Andrew Carnegie’s Philanthropy and Philosophy on Wealth and Distributing it

Fortunately, Carnegie Hall remained and today it is an iconic institution that has brought great joy and enrichment to thousands of people over the years. In this blog post, I will focus on Carnegie’s philanthropy and philosophy related to wealth and distributing it.

After finishing Andrew Carnegie’s autobiography, I immediately turned to reading his short piece called The Gospel of Wealth, which espouses his philosophy regarding the purpose of accumulating wealth. Carnegie’s assertion was that economic inequality is an inevitable byproduct of the capitalist system because the combination of entrepreneurial and managerial talent is such a rare set of skills that those few people (men at the time) should earn tremendous rewards because they will have improved society immensely.

As Carnegie wrote, 'the poor enjoy what the rich could not before afford.'Click To Tweet

The ability of great organizers and risk-takers to manufacture highly desirable goods with tremendous economies of scale served to improve quality while lowering prices and employing greater numbers of people thereby creating more purchasing power and enhancing the welfare of society as a whole. Their success in making this happen was oftentimes the accumulation of great wealth and something that should not be discouraged.

According to Carnegie, it is better to have inequality than universal squalor and without concentrated wealth, society would not be elevated to higher planes of living because there would be very little culture in terms of museums, music, literature, poetry, parks, and libraries. These best come from wealthy individuals invested in improving society by elevating its culture versus from governments. They are highly committed and want to make sure their personal stamp of excellence is put on these institutions and edifices.

The law of competition (capitalism) can breed very nefarious side effects. Wages are a big input in a company’s cost structure and therefore they need to be managed carefully which can lead to unrest and tension between capital and labor. Working conditions may be sacrificed for profits as a result. And yet, as Churchill said about democracy, capitalism is the worst system except for all others. According to Carnegie, it is up to wealthy capitalists to do their part to help improve the lives of the people who have only their labor from which to earn a living.

“Poor and restricted are our opportunities in this life, narrow our horizon, our best work most imperfect; but rich men should be thankful for one inestimable boon. They have it in their power during their lives to busy themselves in organizing benefactions from which the masses of their fellows will derive lasting advantage, and thus dignify their own lives.”

Carnegie said that the wealthiest capitalists should ultimately look at their true purpose and reason for being as serving society and its less fortunate through the appropriate use of their surplus capital.

There are three ways to do this.

Carnegie detested the first course of action as he hated hereditary wealth and stature and believed that it typically did more harm than good for the recipients and society. He was not a great fan of the second because he felt that often times the organizations receiving the funds would not carry out the will of the benefactor because he was not involved or that his motivations might be more for self-aggrandizement and egotistical needs than altruistic.  He also believed that many of the wealthy who wait to give their money away until after their death would continue to hold on to it if they could take it with them.

Carnegie was a huge advocate of the third option. And boy did he live up to his philosophy as you will soon see. Bill Gates is a modern-day version of Carnegie and not surprisingly he was heavily influenced by Carnegie and Rockefeller in turning to philanthropy while alive. He was also successful in convincing Warren Buffett that he could do more good for society by giving a large amount of money away while alive than waiting to pass it on after he died.

It is estimated that Andrew Carnegie gave away $350 million in his lifetime. Assuming he could have earned 5% per year between 1901 (when he received the bulk of his money via the sale of Carnegie Steel to the newly created U.S. Steel and received much of his consideration in bonds paying 5%) that would be worth $91 billion in today’s dollars. And just to show you the power of compound interest, if he had earned 6% per year then that value would be $268 billion!!

When reading about great historical figures or events, I often like to turn to www.newspaperarchive.com to do some real-time research. I came across the following article from 1902 highlighting the largest charitable donations made in 1901 and highlighted those made by Carnegie. The outlier is the extraordinary gift of $30 million made to Stanford University by Jane L. Stanford. Next, to that, Carnegie is by far the largest benefactor and to many different organizations. His largest gifts totaled more than $20 million to eight organizations. In contrast, John D. Rockefeller only shows up once with a $1.25 million gift to The University of Chicago (which we’re grateful for since my daughter now goes there). 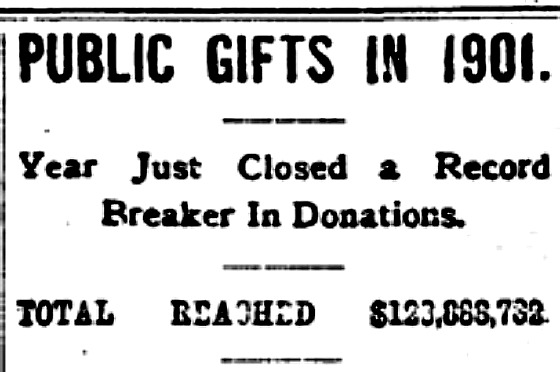 Not surprisingly, like Gates and Buffett today, Carnegie was in favor of an estate tax which graduates from zero at a level that can provide for heirs to a very high percentage when wealth swells in order to create an incentive for the rich to attend to their wealth during their lifetime since Carnegie believed that it was the duty of the wealthy to use their surplus capital to improve the quality of life of the less fortunate.

“This, then, is held to be the duty of the man of wealth: To set an example of modest, unostentatious living, shunning display or extravagance; to provide moderately for the legitimate wants of those dependent upon him; and, after doing so, to consider all surplus revenues which come to him simply as trust funds, which he is called upon to administer, and strictly bound as a matter of duty to administer in the manner which, in his judgment, is best calculated to produce the most beneficial results for the community — the man of wealth thus becoming the mere trustee and agent for his poorer brethren, bringing to their service his superior wisdom, experience, and ability to administer, doing for them better than they would or could do for themselves.”

I believe that when we make decisions with a larger point of view and philosophy in mind that it allows one to live from a guiding prism and sense of purpose which can make life more meaningful and joyful. Carnegie operated this way. His eureka moment came when he aligned on a philosophy that married his optimistic nature with his belief in the power of giving back to humanity and the incredible return on investment that comes with that.

“Not only had I got rid of theology and the supernatural, but I had found the truth of evolution. “All is well since all grows better” became my motto, my true source of comfort. Man was not created with an instinct for his own degradation, but from the lower he had risen to the higher forms. Nor is there any conceivable end to his march to perfection. His face is turned to the light; he stands in the sun and looks upward. Humanity is an organism, inherently rejecting all that is deleterious, that is, wrong, and absorbing after trial what is beneficial, that is, right. If so disposed, the Architect of the Universe, we must assume, might have made the world and man perfect, free from evil and from pain, as angels in heaven are thought to be; but although this was not done, man has been given the power of advancement rather than of retrogression. The Old and New Testaments remain, like other sacred writings of other lands, of value as records of the past and for such good lessons as they inculcate. Like the ancient writers of the Bible our thoughts should rest upon this life and our duties here. “To perform the duties of this world well, troubling not about another, is the prime wisdom,” says Confucius, great sage and teacher. The next world and its duties we shall consider when we are placed in it.”

If you’re interested in knowing what Andrew Carnegie’s philanthropic efforts have created and long endured, then I suggest you click on this link.

2 comments on “Benefits of Philanthropy - Give it Away Now..or Later”