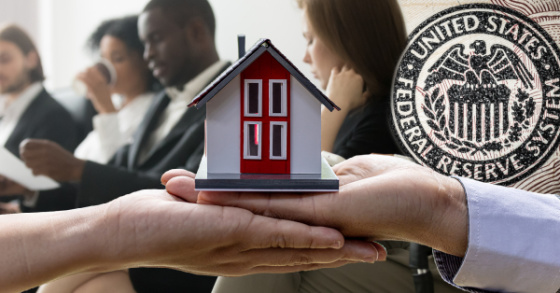 It’s becoming even more clear that in order to stifle inflation, the Fed is going to have to induce a recession.

The following chart shows that it takes a recession to stamp out inflation or bring it down even more, and I don’t see why this time will be any different. 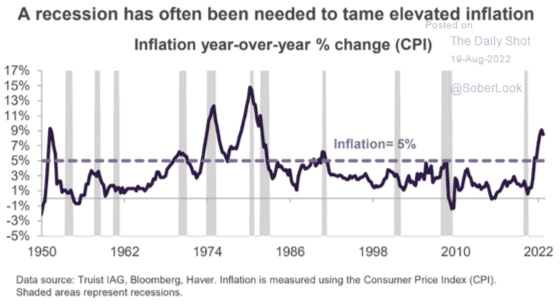 Strong wage growth is one of the areas of the economy that the Fed is targeting. This chart shows the strong correlation between wage growth and core services inflation. 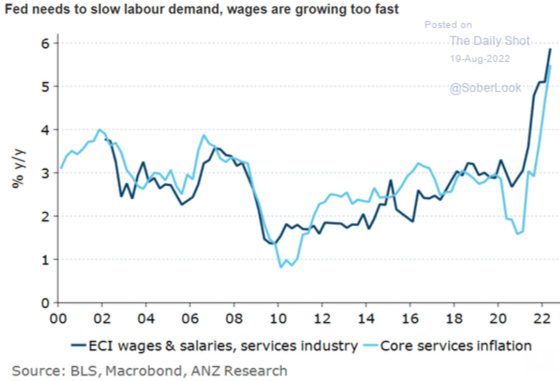 The market is taking the Fed at its word in terms of its forecast for future short-term rates that it will tighten above the neutral rate. The neutral rate is the rate at which the economy and employment continue to grow while the rate of inflation remains in a target range. Of course, the need to tighten beyond neutral is somewhat a function of being far below it for a long period of time. 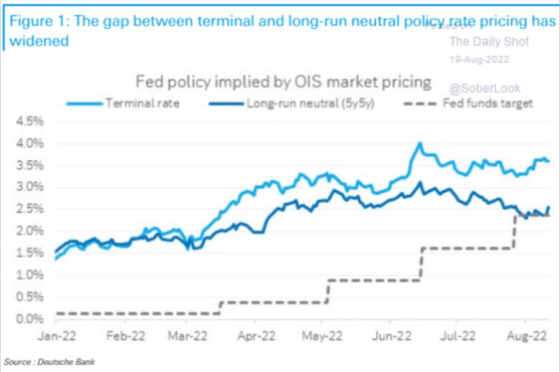 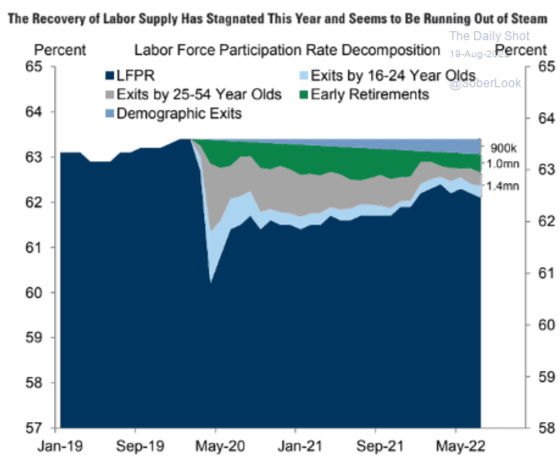 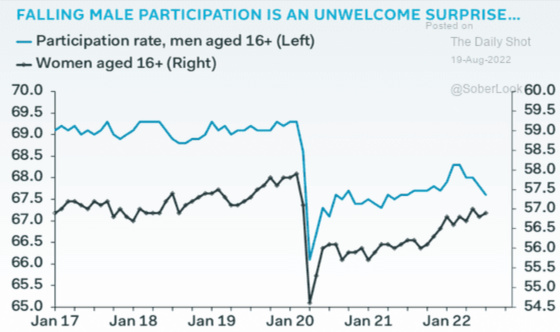 Most of the drop in the participation rate is coming from people with less than a college degree. 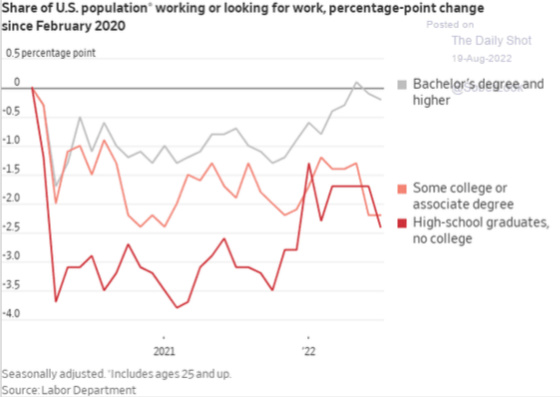 In addition, more people appear to have retired earlier than they did pre-Covid. The drop in the 55+ cohort is more than the 16 to 54 age range on a percentage basis. 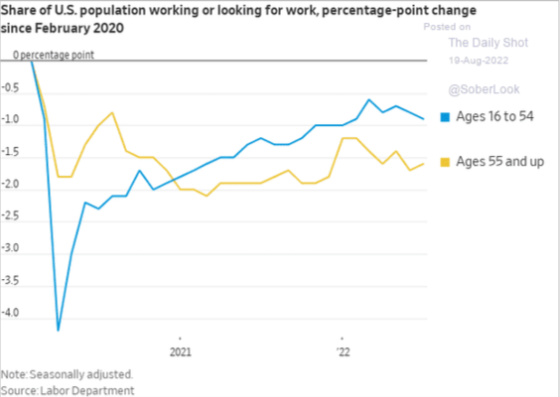 Maybe the higher savings of the top 80% of the population has contributed to less need for people to re-enter the labor force. 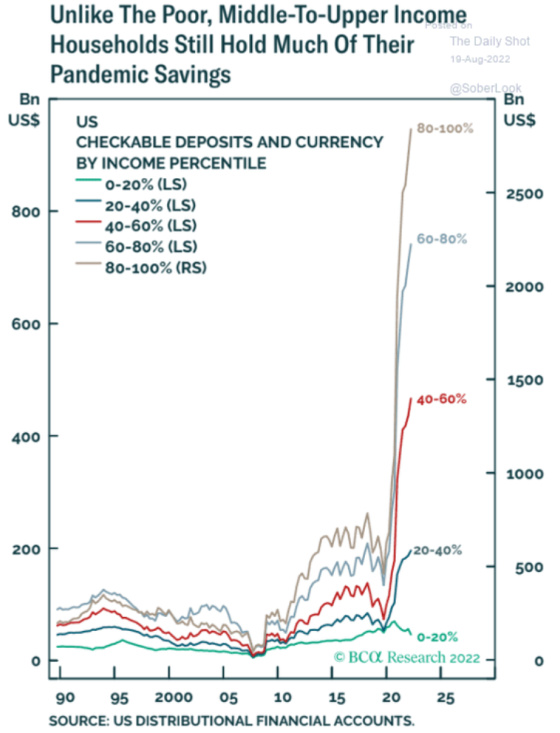 If more people can rejoin the labor force, then this should make the Fed’s job easier as this will create more supply of labor and presumably reduce the pressure on wages. In addition, if Fed policy results in layoffs such that the demand for labor drops, I think the Fed would welcome this. According to a survey by PwC, this appears to be happening or will be the case in the months ahead.

And yet, the survey still shows how employers are increasing compensation for certain types of employees as the battle for skilled labor remains fierce.

“The findings illustrate the contradictory nature of today’s labor market, where skilled workers can still largely name their terms amid talent shortages even as companies look to let people go elsewhere, particularly in hard-hit industries like technology and real estate.”

Now let’s turn to real estate, particularly housing, as this is a vitally important part of our economy and is clearly under pressure with higher mortgage rates and inventory challenges. Despite home sales dropping, as this chart shows, 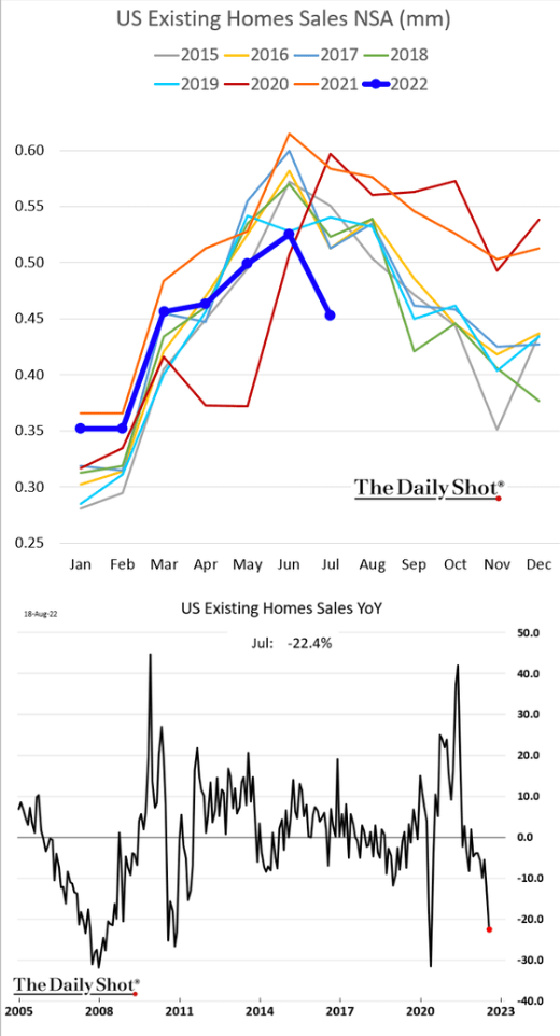 …inventory levels are still quite low, although they are growing. 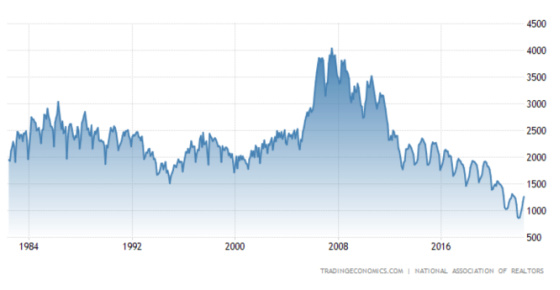 Perhaps Phoenix is a canary in the coal mine as its inventory of homes for sale has increased dramatically in a short period of time. 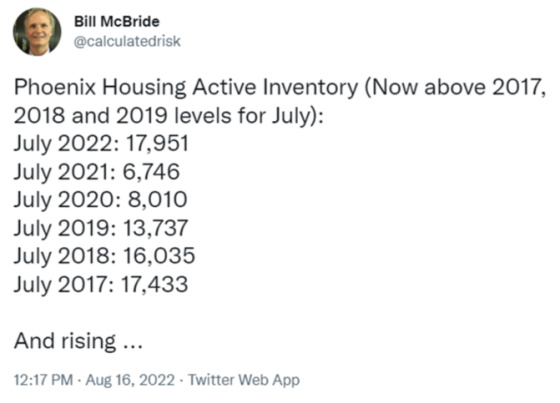 One can see that based on Zillow data, the rate of appreciation is slowing year-over-year but still at a high level. On a monthly basis, however, we are starting to see a more significant slowing. 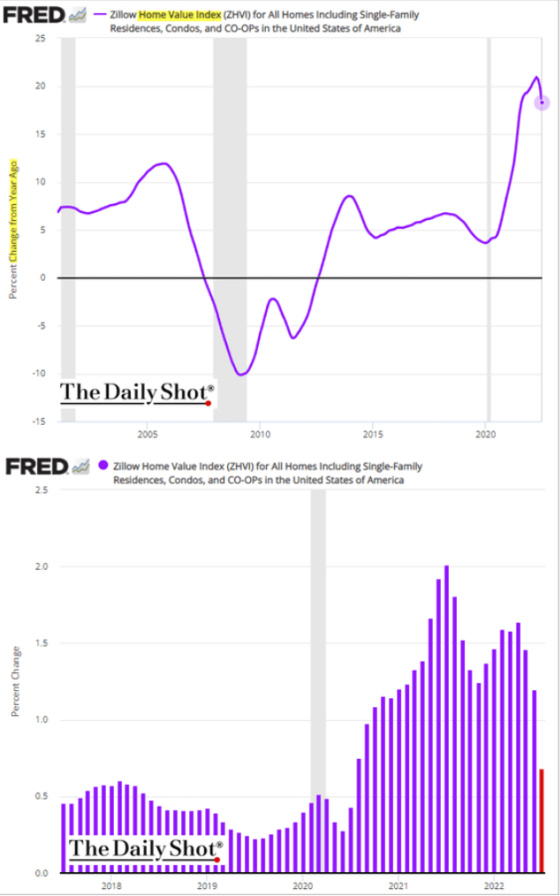 One of the headwinds facing the housing market is that the Fed will no longer be a net purchaser of mortgage-backed securities under its quantitative tightening program. 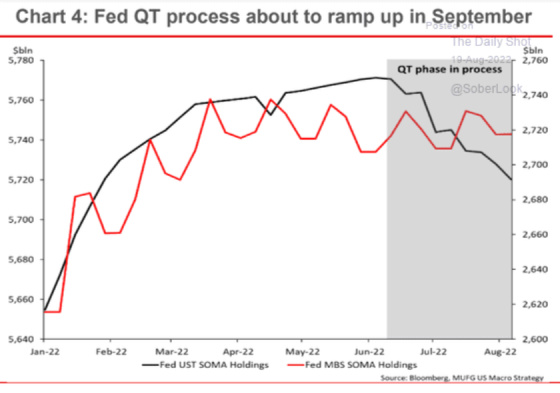 The Fed’s aggressive purchases of mortgage-backed securities contributed to a sharp compression in the premium investors required to own mortgages over risk-free Treasuries.

One can see from this chart that the premium compressed significantly in the wake of the Covid monetary stimulus but then increased significantly to come close to Covid peaks. It has now come down a bit but is still elevated. This serves to keep mortgage rates higher than they otherwise would be as investors want to protect themselves with the Fed no longer being a buyer as well as potentially being a seller of mortgage-backed securities.

Higher rates have clearly had an impact on the number of loans entering into rate locks for home purchases.

This corresponds with an overall slowdown in purchase activity. 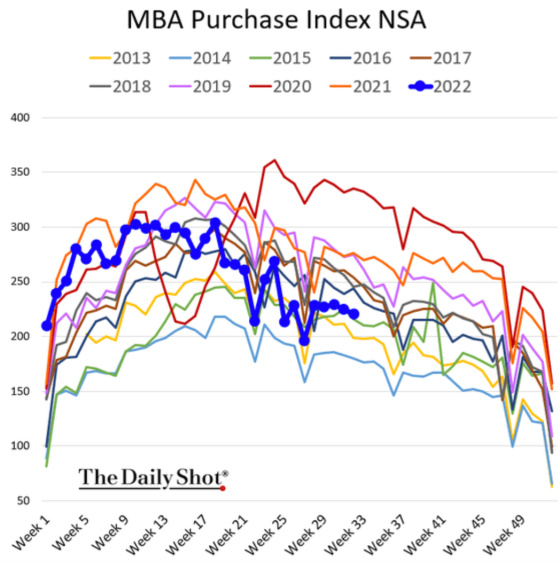 A more hostile Fed seeking to weaken the economy, hurting the labor market, and not being bothered by housing becoming collateral damage as part of its policy to stamp out inflation, is tightening monetary policy at a time when housing supply (single-family and multi-family) are quite elevated.

We’re now beyond 2005 levels and in the mid-1970s when housing demographics were quite favorable. 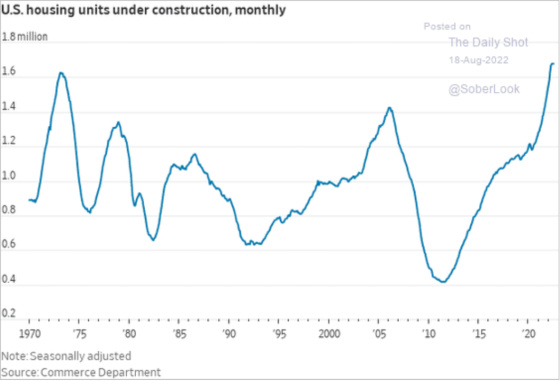 The Fed is very clear that its policies will negatively impact housing, as this excerpt from the most recently released minutes shows.

“Participants anticipated that this slowdown in housing activity would continue and also expected higher borrowing costs to lead to a slowing in other interest-sensitive household expenditures, such as purchases of durable goods.”

It appears that buyers are reading the tea leaves, and they’re either getting cold feet or finding the cost to own too burdensome with mortgage rates having moved so far so quickly. 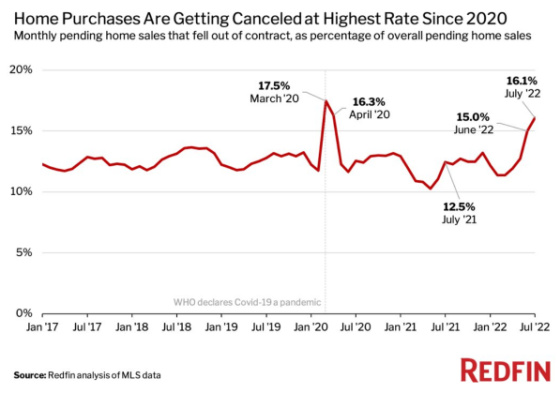 And so it goes. The Fed is not happy with the inflationary pressures that have built up, and it feels compelled to take aggressive action to tighten monetary policy with the goal of slowing the economy or even forcing a recession, lowering wage growth, and letting the chips fall where they may when it comes to housing.

It seems like the odds of a recession are growing daily as companies start to cut back on hiring, instituting layoffs, and interest rate-sensitive sectors like housing start to contract.