In Search of Goldilocks 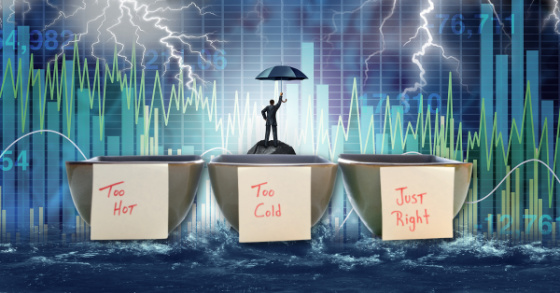 Last week the Fed raised short-term interest rates by 0.75%. This was entirely expected by the market. Given that this was already priced in, it stands to reason that the only source of new information would be what the Fed would communicate in its statement that’s released in conjunction with announcing the interest rate hike along with Chairman Jay Powell’s press conference.

If the drop in long-term interest rates is any indication, then the market believed that Powell was setting the stage for either slowing down rate increases after 2022 or being open to cutting them as the market is pricing in. The 10-year Treasury yield has dropped by approximately 0.2% since the hike was announced. 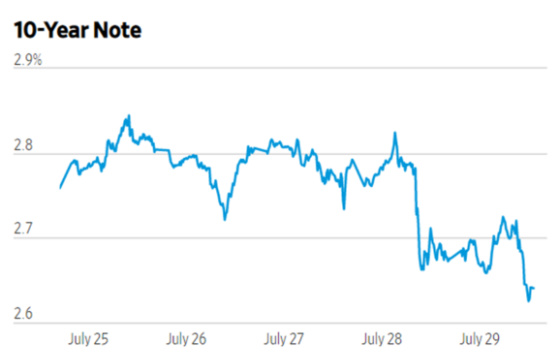 Investors are now far more dovish than Fed officials in terms of the path of future short-term rates. The market tends to be right more often than not.

This sets up a very interesting situation. One can see how the market has lowered its expectations of where the Federal Funds Rate will be at the end of 2022. It dropped by approximately 0.5% from the peak a couple of weeks ago. 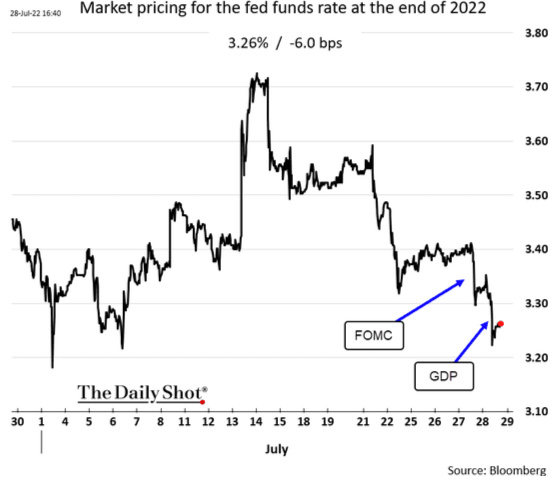 This puts the Fed in a bit of a quandary as its primary focus is fighting inflation which it is willing to do even at the cost of economic growth and layoffs. And yet, it doesn’t want to tighten too much to cause unnecessary harm. But now that it has signaled that it may take its foot off of the brake, the market immediately priced in higher inflation which is what the Fed does not want. It’s also seen the stock market rally quite significantly, high yield bond spreads tightening, and interest rates coming down. This cannot make the Fed very happy and may result in a battle with the market to determine who is in charge in stamping out inflation. The market seems to be reverting back to Powell’s belief that inflation is now transitory and that the Fed will over-tighten and cause too much harm to the economy.

Inflation expectations rose fairly materially after the Fed announcement and Powell press conference. It’s basically saying that the Fed is going to have to accept a little higher inflation than its 2% target if it wants to help support consistent economic growth and a strong labor market. 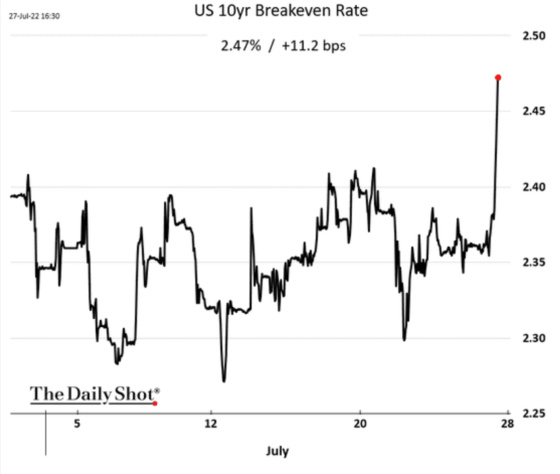 Powell admitted he made a mistake keeping monetary policy too loose because he thought inflation would be transitory. He may be right!Click To Tweet

Powell admitted he made a mistake keeping monetary policy too loose because he thought inflation would be transitory. He may be right, however, as the first chart shows how one measure of the money supply is contracting quite rapidly after exploding higher during Covid. 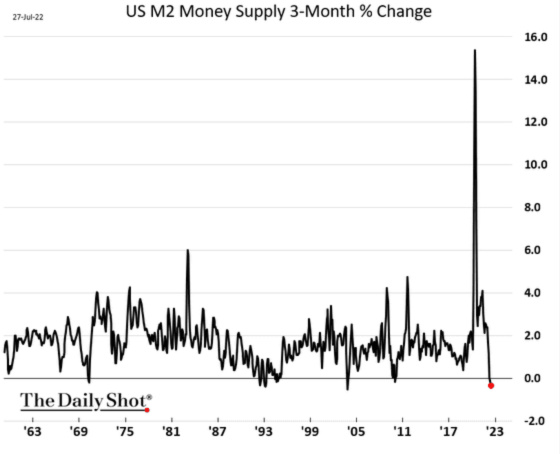 This chart shows how the change in money supply growth rates tends to lead CPI by approximately 18 months. If this relationship continues to hold, then inflation rates should be coming down quite meaningfully in 2023 and 2024. 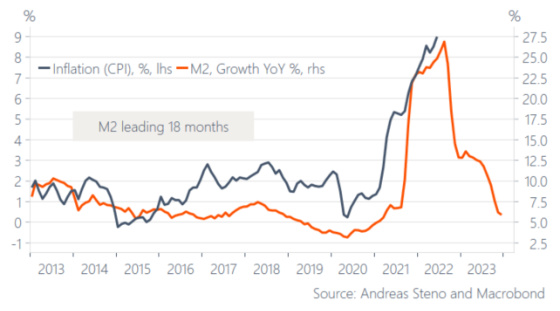 The Fed is facing a few structural headwinds, which should keep it from raising rates materially higher than 3%. One is that GDP is now running below potential despite the rapid post-Covid recovery. Over the long-term 10-year Treasury yields are largely a function of potential economic growth and inflation. Inflation is usually fairly stable, and yields tend to fluctuate more as a result of future economic growth. Of course, this has reversed over the last year as investors and the Fed became much more concerned about inflation. With inflation projected to come down meaningfully over the next couple of years, then all eyes are on the country’s growth prospects, which is still facing some significant challenges. 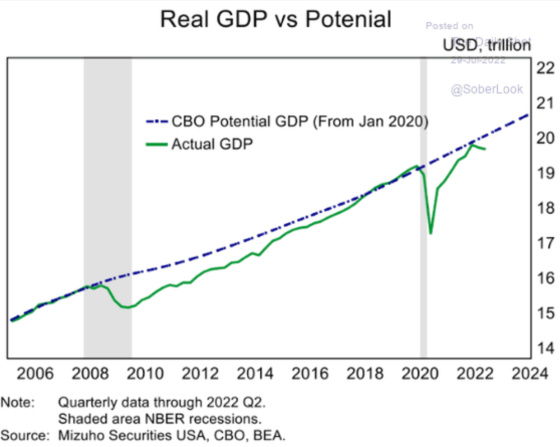 The second risk to economic growth is that whenever the Fed embarks upon a tightening campaign, something in the economy has broken, or events have taken place that results in the Fed pausing and then reversing course, as this chart shows. 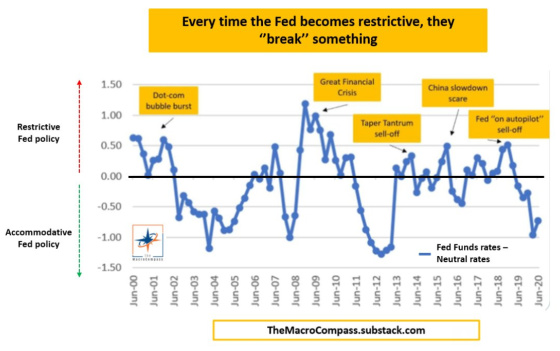 Housing is one major part of the economy that has slowed down considerably and has become a drag on economic output.Click To Tweet 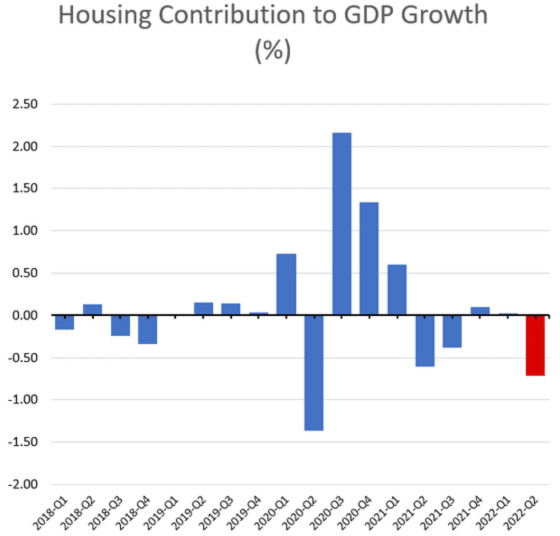 The trends are not very favorable as pending home sales have dropped fairly materially. 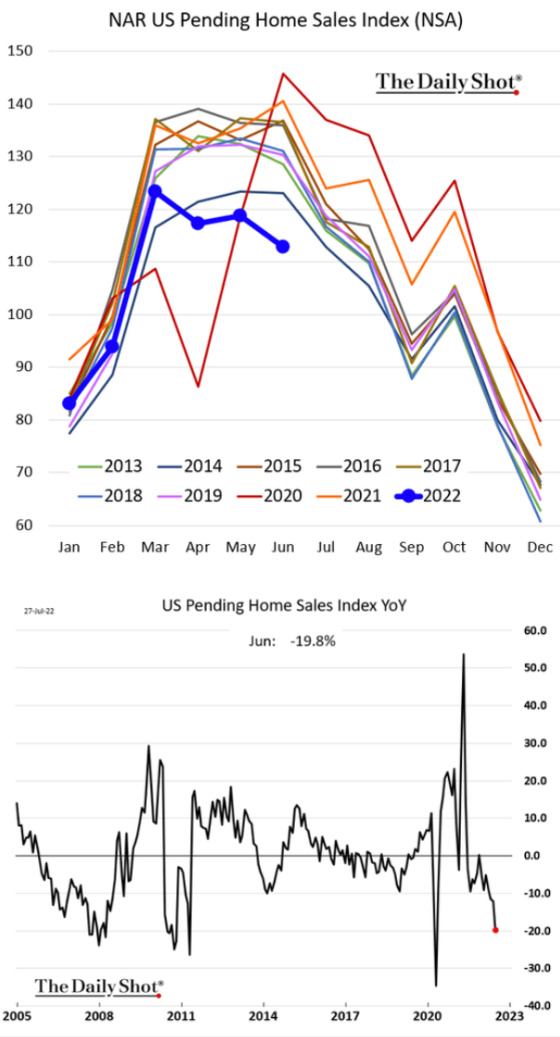 These next two charts show how big drops in new home sales tend to correlate with recessions. This makes sense because housing construction creates a big multiplier effect in terms of jobs created and other goods and services purchased to furnish and occupy a new home. 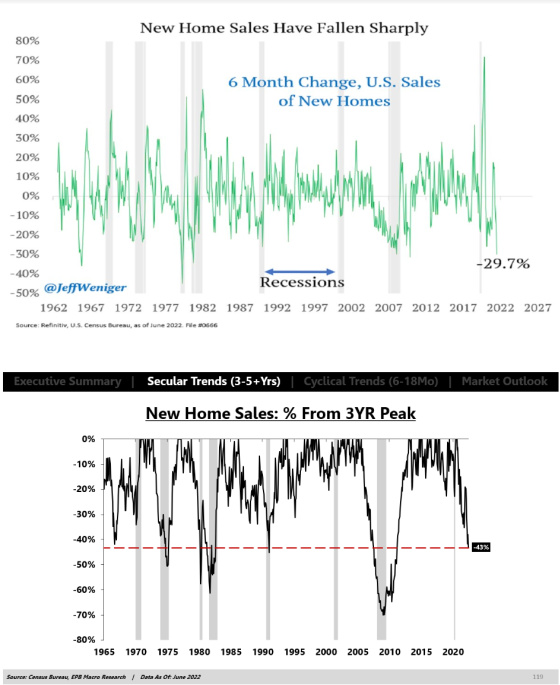 And let’s turn to Europe and throw its economic weakness into the mix along with deteriorating consumer confidence, particularly in Germany. From recent Purchasing Managers surveys in Germany and Italy, inventories are building up while new orders are falling, which has tended to be a precursor to weak economic environments.

Consumer confidence in Germany is now below the depths reached during Covid. 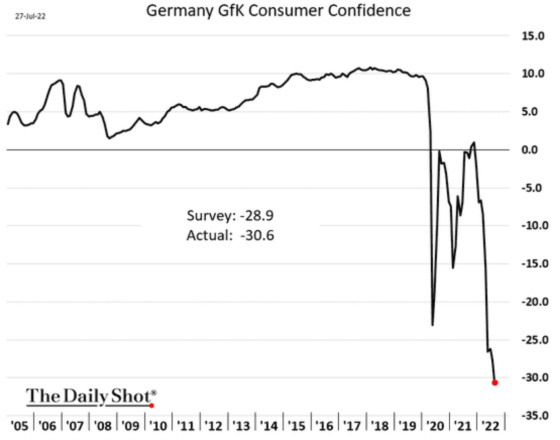 Deteriorating sentiment and economic conditions are very closely tied to the precarious situation that Germany finds itself in terms of its reliance on Russian natural gas to help keep industry going. Germany is now facing the real prospect of having to ration supply and induce consumption cutbacks. 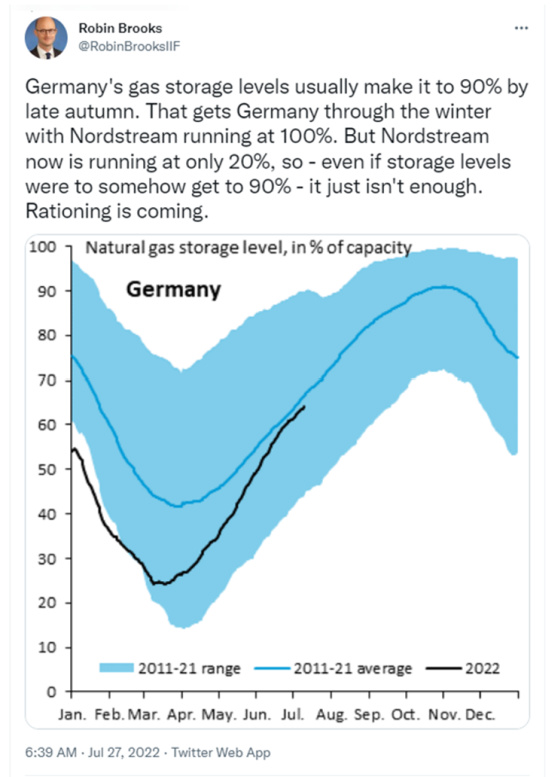 One can see how Russian gas flows have been significantly curtailed as Putin weaponizes energy supply for his own geopolitical objectives. 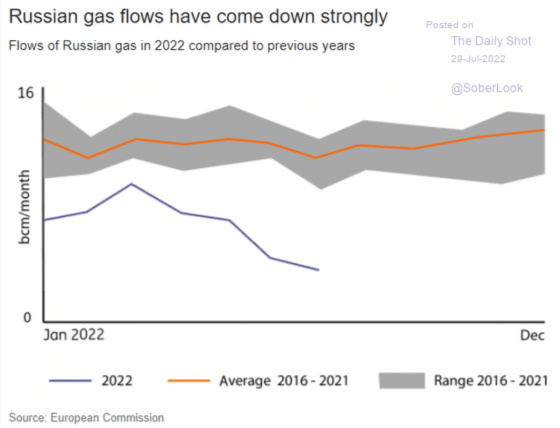 I’ll end this by trying to answer the question as to whether we’re in a recession or not.

Technically yes, because we have had two-quarters of negative GDP. On a more practical basis, however, looking at other indicators, it does not appear we are in one yet. Incomes and jobs are still growing, although I do see headwinds for both as I think the labor market is poised to become much weaker over the next six to 12 months. 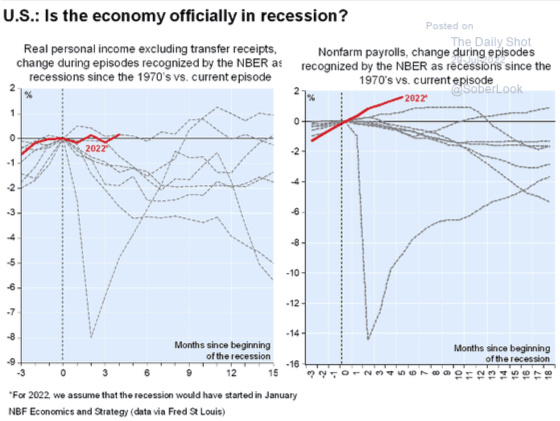 I will be paying close attention to weekly jobless claims. They are starting to rise relative to pre-Covid numbers. We’ll see if it’s a blip or the start of labor market weakness ahead. 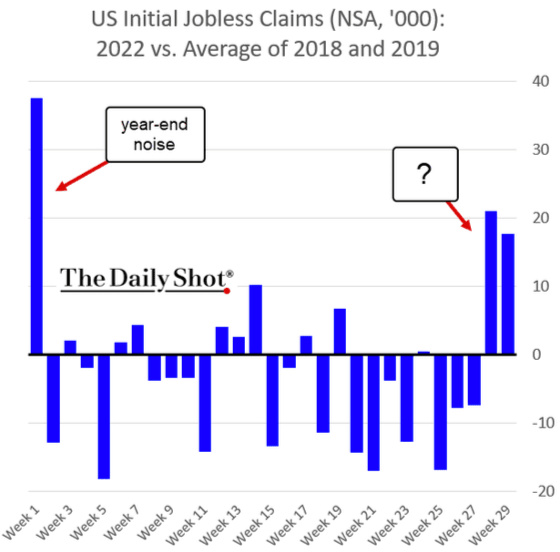 The Fed is trying to find that optimal short-term rate and monetary conditions to continue to help bring inflation down while not cratering the economy and job market. The market has rallied quite impressively as long-term rates have come down in spite of inflation expectations rising. If the Fed wants to fight the market, then it will temporarily overtighten and break something. If it becomes too dovish, however, and its policies result in inflation expectations rising and rates of inflation remaining too high, then it will have to take on the market in a titanic battle of wills.

Clearly, Powell is in search of Goldilocks, and it seems like the market believes she is in the neighborhood.