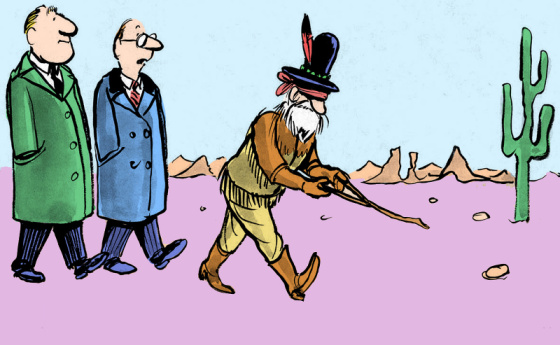 I have a great-nephew that is about to turn one in July and he and his parents, my niece and her husband, live in the Bay Area. They came down to Orange County to stay with their parents (my sister-in-law and brother-in-law)  for Father’s Day weekend. My sister-in-law hosted a brunch so the family could get together and spend some time with baby Ezra. The only person who couldn’t attend was the other grandmother who was not feeling well.

Brunch was lovely and it was really nice to spend time with Ezra who is always so happy and smiley. We left at the same time as Ezra and his parents who were driving back up to the Bay Area to return home. Upon their arrival home, they subsequently learned that the grandmother who could not attend the brunch tested positive for Covid. Since they spent time with her they understandably thought it best they get tested as well. Lo and behold they all tested positive, including Ezra! This led to others who attended the brunch getting tested and it appears I was involved with my first superspreader type of event as of the 12 people who attended, seven so far have tested positive. I took a rapid test the night after the brunch and was negative, although that was too soon to be in the clear. It’s been five days so far and I feel fine so I’m optimistic I will have dodged a bullet.

I texted my sister-in-law to see how she was doing and made the comment that it appears that the other grandmother, who happens to be a doctor, was the superspreader given she was the first one sick. She wrote back and said that the other grandmother thought it was Ezra who was the culprit! And given how everyone was playing with him and holding him this does make a lot of sense, although we don’t typically think of babies as being superspreaders.

I bring this up because we’re starting to have our own future superspreader in the financial markets. Here’s a tweet from Jeffrey Snider who follows the very complex plumbing of the financial markets, particularly Eurodollar futures, which are expectations for future 90-day Libor rates. He sees these rates and their associated curves (spreads between different maturities of debt instruments) as canaries in the coal mine for future financial problems. 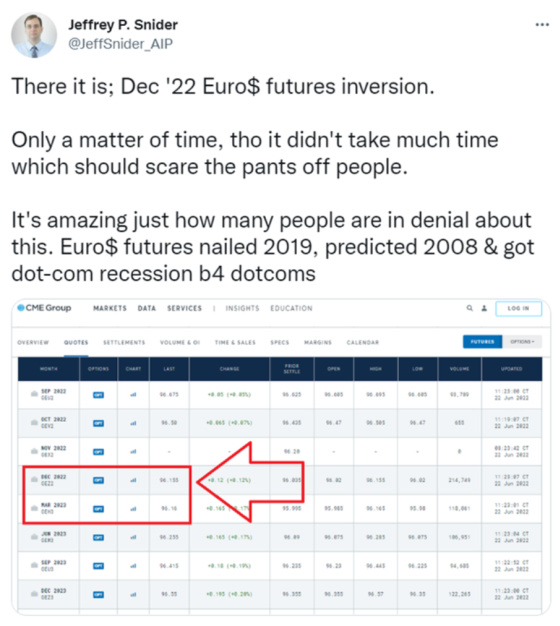 For the first time since Powell had to pivot in late 2018 and 2019 from hawkish to dovish, Eurodollar Futures have inverted, meaning future short-term rates beginning in early 2023 and going forward are expected to be lower than those in late 2022. This has been a very ominous precursor to financial conditions becoming tighter and filtering through to the real economy. And it inevitably sets the stage for lower interest rates as the Fed has to course correct. Right now Fed Chairman Jay Powell is taking a very hard line in terms of prioritizing breaking the back of inflation even at the cost of a recession and higher unemployment.

Fed Chairman Jay Powell is taking a very hard line in terms of prioritizing breaking the back of inflation even at the cost of a recession and higher unemployment.Click To Tweet

It now appears that inflation is going to peak very soon and come down rather quickly, although it may take some time to get back to Powell’s goal of 2%.

Energy and housing are the keys to this happening. Energy is starting to weaken and so is housing, although higher mortgage rates could push rents even higher as people get priced out of owning a home, which could keep CPI more elevated than it otherwise would be. A lot of yin and yang is going on when it comes to housing, interest rates, and inflation. 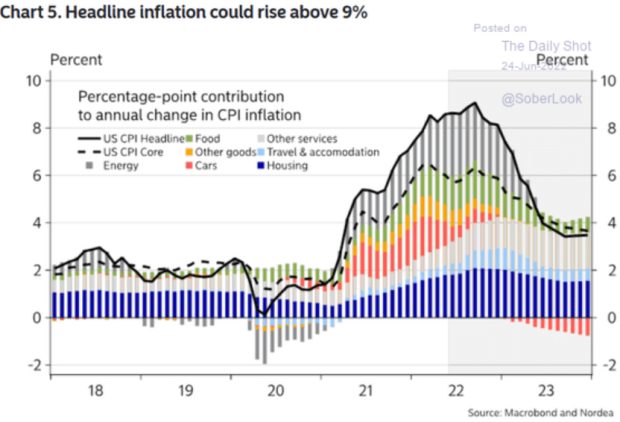 So many things that have conspired to have inflation rise so dramatically are starting to reverse. Copper is considered a very good economic barometer since it’s an industrial metal in which demand for it is well correlated with global economic activity. This chart suggests that global economic momentum is weakening fairly materially. 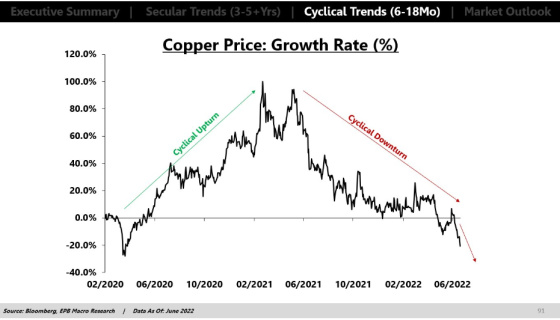 Here’s another ominous tweet from Snider, along with a headline seemingly corroborating his concerns. 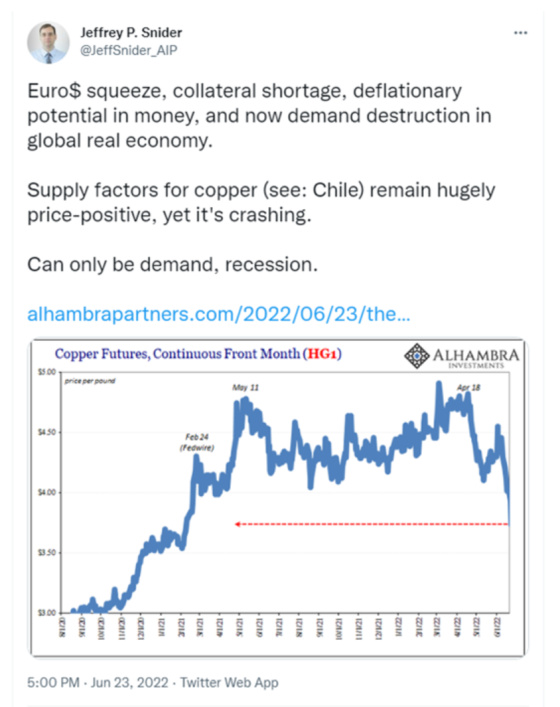 Other industrial commodities are dropping as well, which should be favorable for future inflation numbers but not such a good sign for future economic activity. 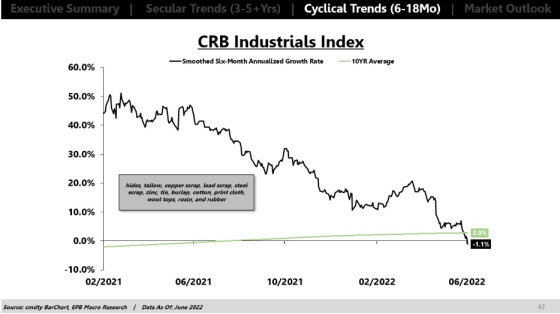 Consumer spending, which was on a tear, seems to be slowing down quite materially such that it has now going negative on an inflation-adjusted basis. 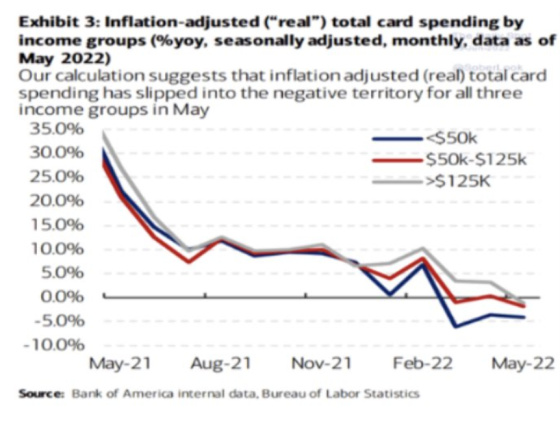 This next chart is rather busy but it shows how global central bank liquidity has gone from being massively stimulative to highly contractionary and this is weighing heavily on financial markets which have had a horrendous first half of the year based on the performance of stock and bond markets. 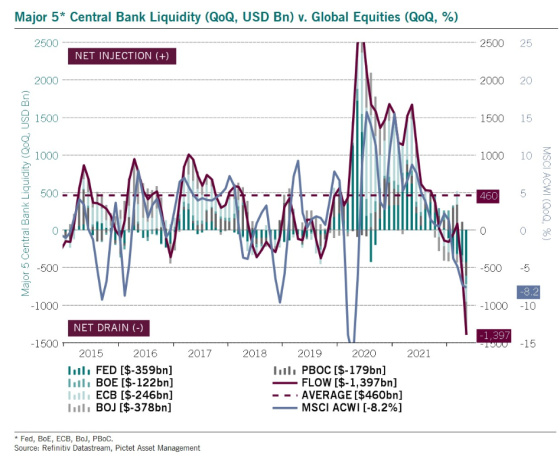 Here is a less busy and shorter-term chart focused just on the Fed showing the contraction in liquidity. And this is before the Fed has started to shrink its balance sheet which Powell estimates will be in the $2.5 trillion range. 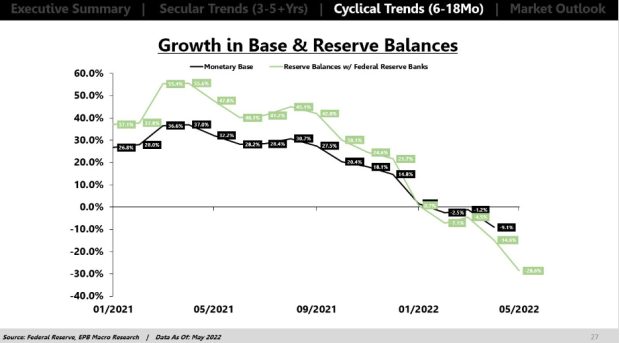 I’m a big believer that when the cost of new loans is materially higher than the average rate of loans outstanding that this will lead to a slowdown in economic activity because it will be much more difficult for firms to refinance loans coming due if they were originated with very aggressive underwriting parameters (i.e. very borrower-friendly). In addition, asset values are calibrated based on many variables, but a key one is the cost of debt and how liberal or conservative the terms are when originated. With so many acquisitions and refinances having taken place with very cheap and aggressive debt, asset values skyrocketed. One can now see, based on the author of the tweet’s calculations, that debt costs have gone up dramatically and this is bringing mergers and acquisitions and IPOs to a halt, which will have a material impact on economic activity. 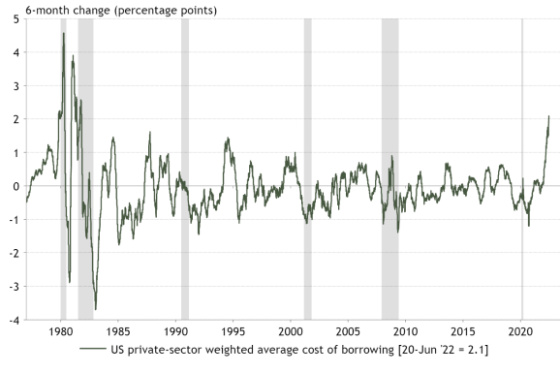 This tremendous increase in borrowing rates has filtered through to mortgage rates which is crushing the demand for mortgages to purchase homes. 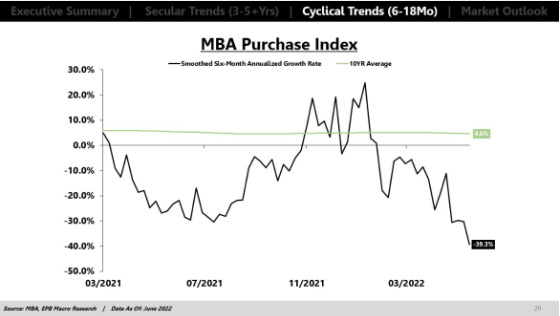 This next tweet and chart put the rise in mortgage rates and its corresponding evisceration of demand in perspective. 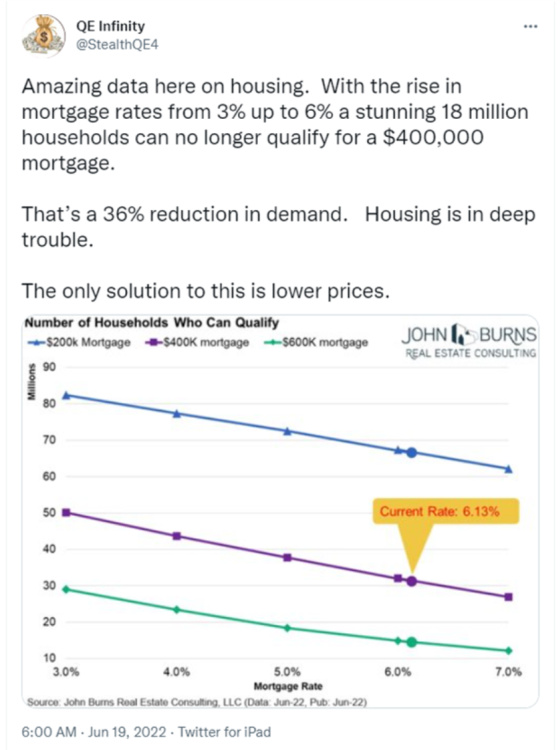 The last economic charts I will share are related to last week’s release of Purchasing Managers Index reports. They were not pretty. 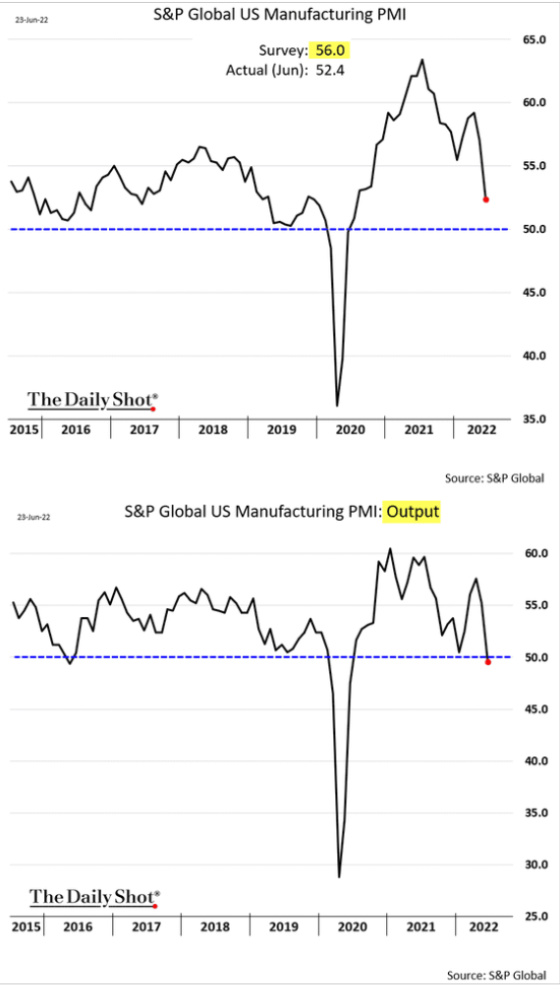 The outlook for new orders and backlog of work is deteriorating, which is not a good sign for future economic activity. 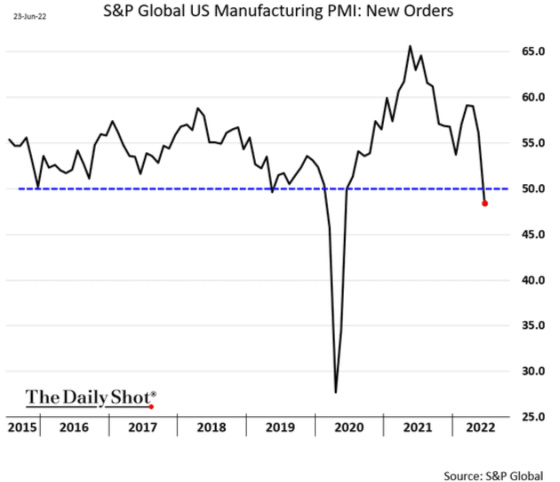 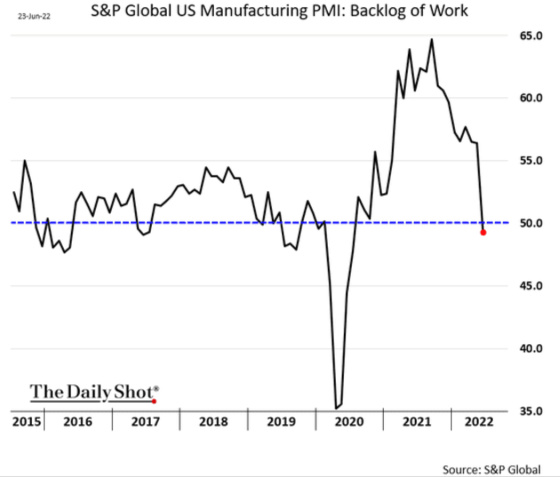 Service businesses are seeing much less growth and a deteriorating outlook as well. 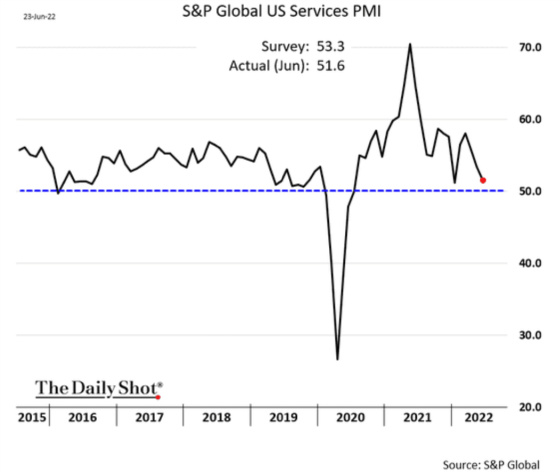 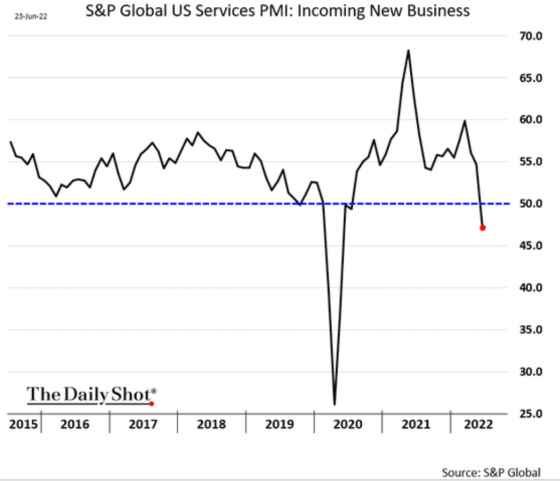 The overall outlook for U.S. manufacturing is not very positive if the correlation between financial conditions and manufacturing activity continues to hold its historical relationship. 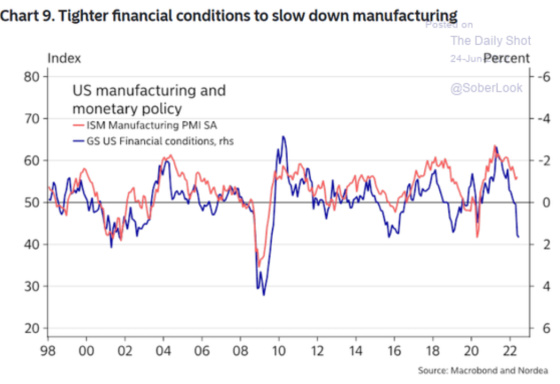 Put all of this together and the market is corroborating the Eurodollar futures inversion by now pricing in a less aggressive path for Fed rate hikes. 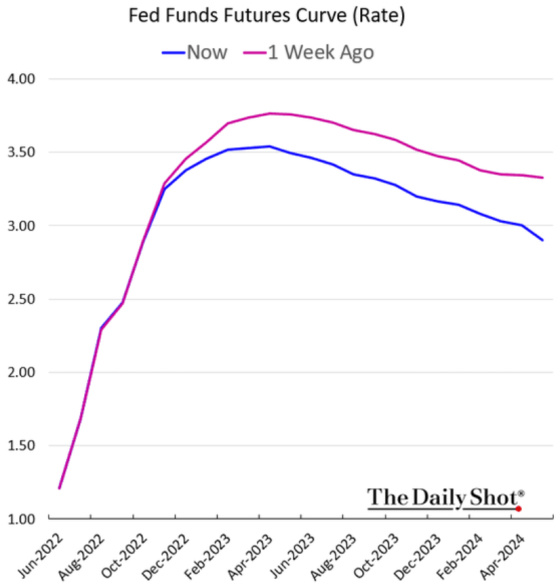 We now have Fed rate cuts being priced in quite materially with the market seeing the Fed cutting rates by nearly 60 bps between Q1 of next year and Q1 of 2024. 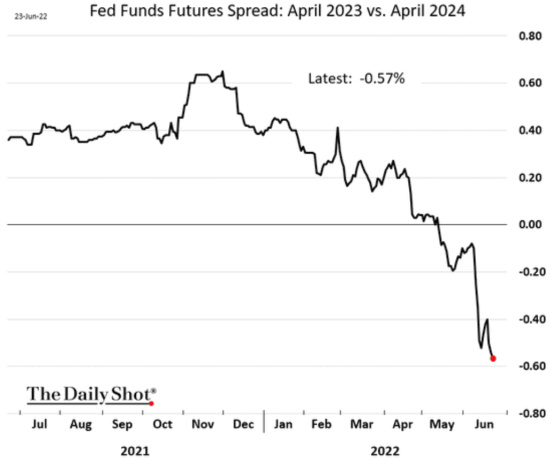 One investment bank thinks the Fed will have to cut rates far more aggressively than what the forward curve is projecting. Nomura came out with its projection for future Federal Funds rates and it shows a very significant reduction beginning in late 2023 through 2024 bringing the rate down to less than 1%. 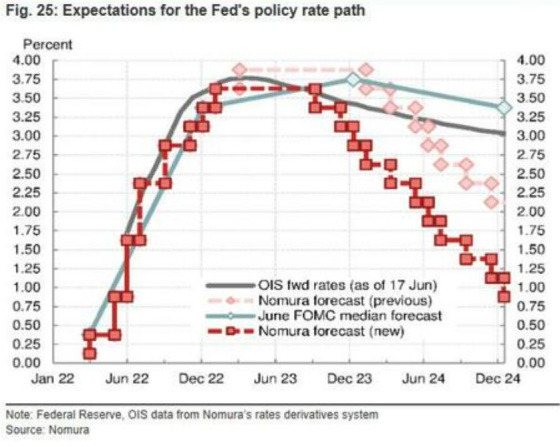 As a large variable-rate borrower we are anticipating a bit of a bumpy ride for 2022 and 2023, but if economic activity continues to weaken and financial conditions tighten, we do think we will still have a much lower cost of funds over the life of our loans, particularly if the Fed starts to cut aggressively pursuant to Nomura’s forecast.