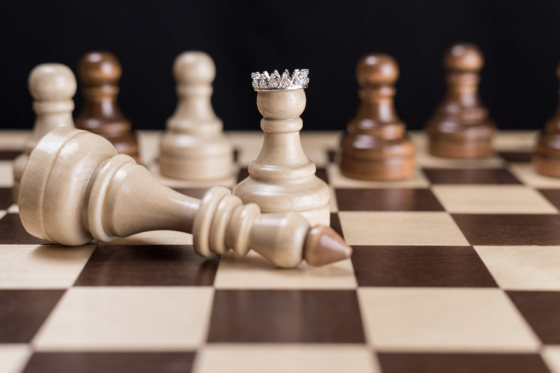 The Supreme Court’s decision to overturn Roe vs Wade understandably elicited a huge wave of outcry (pro and con). One of the most controversial aspects of the decision was the seeming disregard for Court precedent and how it was perceived by legal experts to have been tossed aside. I don’t bring this up to wade (no pun intended) in these very turbulent waters but to use it to call attention to a seemingly similar aggressive shift away from precedent by the Fed. Along with other recent decisions, there is clearly regime change at the Supreme Court. The Fed too is experiencing regime change, although I think this will remain in place for far less time than the Supreme Court decisions and their corresponding impact. 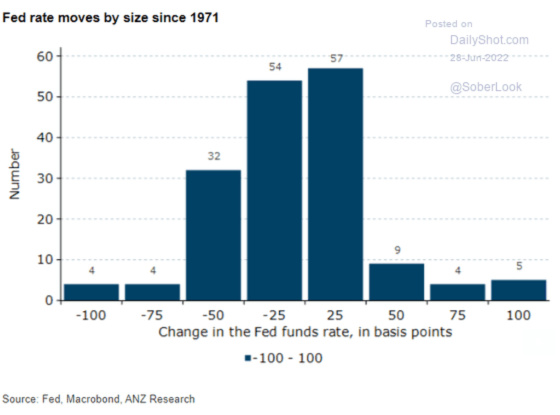 The differences between the Fed and Supreme Court, however, are quite vast, as Fed moves, and their corresponding impact, are ephemeral and the Fed can easily change direction as Jay Powell has proven he is so inclined to do (e.g. 2018-19 and today). The Supreme Court, on the other hand, can issue rulings that can have a huge societal impact that can be felt for decades and even centuries. That is why adhering to precedent has been a huge cornerstone of the Court for most of its existence.

Societies and how they operate should not be jerked around as this can cause great instability and division. The rule of law and the ability for citizens and economic actors to count on continuity and predictability have been vitally important in giving people the confidence to invest and make personal decisions about how they want to live their lives and what kind of societies they want to be citizens of.

This has helped unleash incredible human potential, vastly expanded consumer choice and quality, and improved living standards, especially in terms of better health outcomes, while lifting vast numbers of people out of poverty by growing the economic pie on a massive scale. In short, predictability and stability are important ingredients to unleashing human potential and all of its associated positive byproducts.

And while the Fed can ebb and flow based on economic and financial conditions, forward guidance, or the Fed doing its best to let investors know what the anticipated path is for monetary policy and its corresponding reaction function, has become very important to allow investors to make longer-term decisions with the expectation that there will be a fairly stable interest rate path.

This predictability and continuing to bet on powerful disinflationary trends such as aging societies, technological innovation, our heavily financialized and indebted economy, and globalization, along with investors typically overestimating the Fed’s aggressiveness in terms of raising rates in the future as the chart below shows, has led CWS to have a tremendous bias for floating-rate loans. This bias has translated to large savings in interest payments as our rates have been lower over long periods of time than the fixed-rate equivalents at the time our loans originated. We have also been able to take advantage of the much lower cost prepayment penalties to sell properties at what we deemed were opportune times or refinance these loans into more advantageous ones.

(Quick explanation of this chart. When the gray lines are above the blue ones then this means that investors bet on future short-term rates being higher than they actually were. This made choosing variable-rate loans more cost-effective than fixed-rate loans. There have been times, however, when the gray lines are below the blue one which meant that investors underestimated the path of future short-term rates and fixed-rate loans were cheaper than variable rate loans. Fortunately for CWS, these times have been far fewer than the opposite situation, and when they have materialized, they have lasted for shorter periods of time. 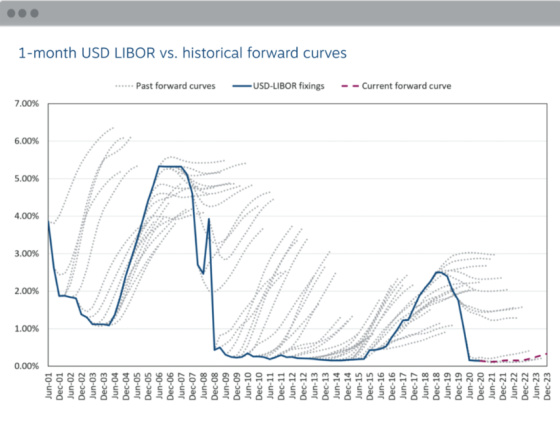 At CWS we were effectively betting on the precedent of gradualism by the Fed and powerful secular forces remaining in place to have us continue to choose and benefit from selecting variable rate loans. Unfortunately, the environment changed and inflation became the pre-eminent political issue which has put a lot of heat on the Biden administration to do something about it. This has led to Powell having political cover to take aggressive action to bring it down. This assumes that monetary policy can be an effective tool against what is more of a supply-side problem. Regardless, perception is sometimes more important than reality.

Biden has to appear as if he is doing something to address the inflation problem. Yes, the job market has been strong and wages have been rising but not enough to overcome the rapid rise in gas prices, food, rents, housing costs, cars, etc. If supply issues cannot be easily resolved by monetary policy, then it’s left to curtailing demand. And this means slowing the economy to sacrifice jobs, and correspondingly purchasing power or lowering intent to buy. This is deemed the least bad option as most people are feeling pretty good about their job security but feeling much less economically secure due to costs going up far too fast. Thus, if costs can come down, everyone benefits, while job losses will impact far fewer people. At least that’s the theory.

Powell is essentially saying that price stability (or declining inflation rates) has been the precedent for 40 years and this is what has enabled monetary policy to be on a much more predictable and gradualist path. But now price stability has become unanchored such that it could become embedded in the psyche of businesses, workers, and consumers and spillover into the economy for a long period of time unless aggressive action is taken to halt this spiral. And if the economy and jobs have to be sacrificed such that a recession ensues, so it goes. The greater good is to sacrifice the short-term for long-term price stability and predictability. Regime change Fed style.

Earlier when discussing inflation I said that it was the pre-eminent political issue. I omitted to say that it’s the pre-eminent economic one too because it appears that Powell and the Fed are going to be fighting the last war as there are already signs that inflation is starting to come down and investors are pricing this in. I’m being a little coy here because of course it’s a huge economic issue because the Fed thinks it’s the most important one it has to address. It has two mandates: price stability and full employment. With the former being very problematic, the latter will be sacrificed. In today’s environment achieving both is not possible.

Let’s now turn to examples of how we may have already turned the corner on inflation. There has been quite a vicious correction in commodities across the board from their highs as this table shows.

One of the likely contributors to the sharp pullback in commodity prices is the quite significant slow down in the rate of growth of the money supply as this chart shows. And given that the Fed is just starting on its quantitative tightening path and restricting monetary policy, this should continue its downward trajectory and create a significant inflationary headwind.

Tighter monetary conditions are now rippling through to future inflation expectations as this next chart shows. It’s a bit of an esoteric indicator so rather than me trying to explain it, I’ll share with you the explanation for it from the FRED website for this economic indicator,

“This series is a measure of expected inflation (on average) over the five-year period that begins five years from today.”

The Fed tracks prices of goods and services that change rather infrequently. Hence the name Sticky Consumer Price Index. One can see how it too has gone up significantly. This chart does show, however, that it tends to peak during recessions or just after. I’ve been arguing we’re on a recessionary path so this might be another indicator supporting this assertion. It also shows how inflation can be a lagging economic indicator and the worst could be behind us. 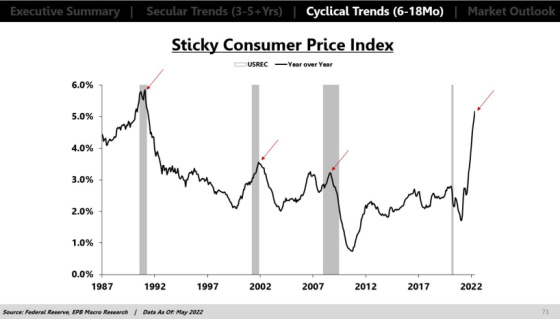 Here is another one of my favorite indicators that seems to have impeccable timing to call economic tops and bottoms. When consumer expectations are much lower than perceived current conditions, this tends to indicate that a recession is on the horizon. We are at one of those tipping points. 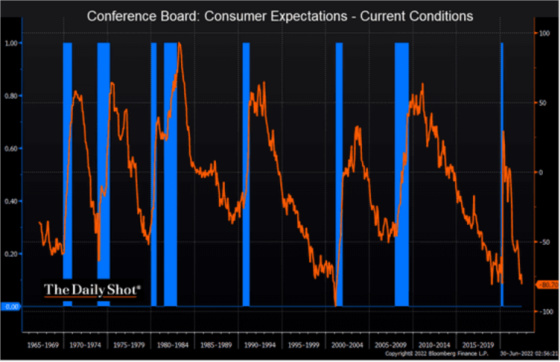 Last week’s report on consumer spending showed a consumer that was retrenching. This in turn is spilling over to the Fed’s favorite inflation gauge rising at a less rapid rate, which is something I expect to see more of over the next six months.

The bond market has really taken notice that the economy is slowing down and maybe the worst of inflation is behind us. The 10-year Treasury yield dropped below 3% on June 30th after being above that level since June 7th. Perhaps we’re now at a point where 3% is the ceiling versus the new floor. Only time will tell.

One important contributor to inflation has been the cost of energy. If the Biden administration truly wanted to make headway in the inflation fight it would not threaten energy companies with public shaming, price caps, not approving drilling leases, drawing from the Strategic Petroleum Reserve, windfall profits taxes, etc. to carry out virtue signaling to pander to get votes (or lose less). Rather, it would create a more hospitable and predictable environment for energy companies to reinvest its now prodigious cash flow into replenishing and growing supply. Wishful thinking I know. One can see that this is not happening and will be a headwind to economic growth and price stability. 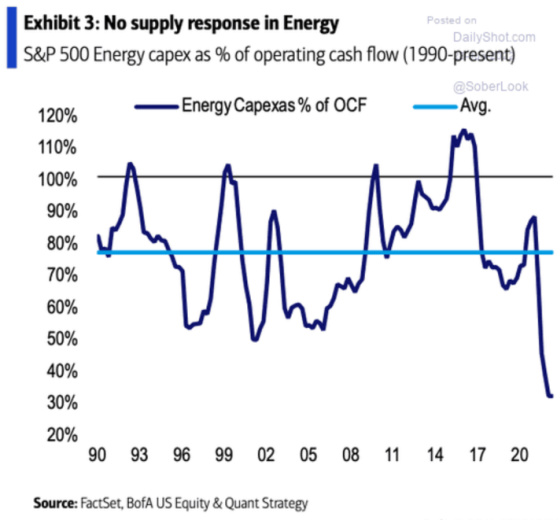 Finally, I will leave you with this tweet from someone I enjoy following on Twitter who does a much better job of summing up Powell’s predicament than I. 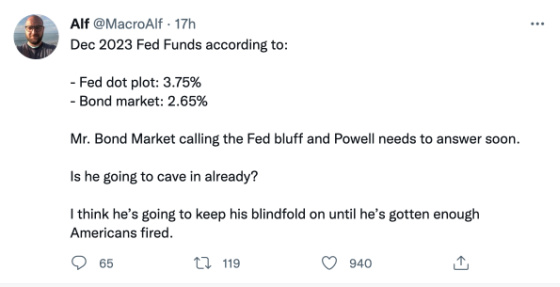 I hope you have a wonderful 4th of July. 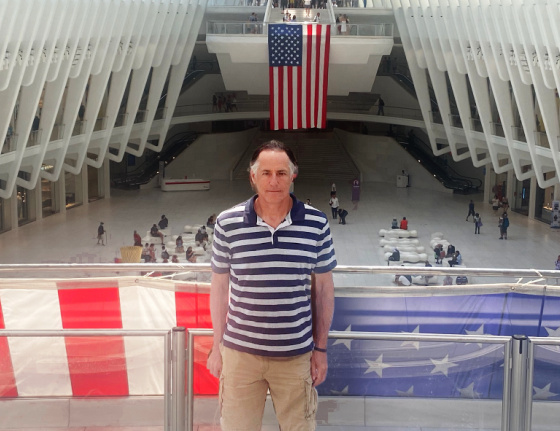