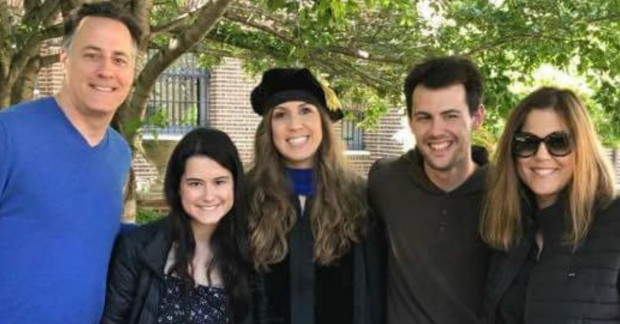 A few weeks ago I referenced Bob Dylan’s recommendation that we find our calling. I saw this in action last week and had this supplemented by some of the things I read. I had the pleasure to go to Philadelphia to attend the graduation of my niece from the University of Pennsylvania where she was awarded a Ph.D. in physics and astronomy. While there I read a couple of interviews that showed the power of focus and specific knowledge and how this will almost always beat the generalist. This plays into one of my favorite quotations which say that “It is better to be a meaningful specific than a wandering generality.”

The awarding of PhDs is the culmination of an intense focus in one area of research. My niece’s program took six years and resulted in a 300+ page thesis. How the graduates apply their knowledge is up to them of course. In the world of investing, business, and teaching, deep domain knowledge, curiosity, discipline, and enthusiasm for one’s subject matter always wins out. I wrote about this when discussing fanatics.

I read an interview in Barron’s with Bruce Greenwald who teaches a class on value investing at Columbia University and has written a very well regarded book on the subject. He was asked what value investing was and Greenwald gave the following, interesting answer that speaks to the power of focus and specialization.

Greenwald: If you are going to outperform the market, somebody else has to underperform. You have to think, “Why am I the person on the right side of this transaction? Because every time I buy something I think is a good idea, someone else is selling it to me.” Now, lay that besides an investment process that searches for areas where you’re more likely to be on the right side of the transaction, using basic value [criteria]. One is so obvious, it’s a crime that people don’t do it more. Suppose I spend my life writing onshore South Texas Gulf Coast oil leases. You fly down from New York and buy one from me. Who do you think made money on that transaction?

In life, specialists do better than generalists with the same level of intelligence. Ben Graham [who with David Dodd wrote Security Analysis, the bible of value investing] started out specializing in railways. He was the first one to look at the ICC data, instead of the very misleading data companies put out. [Graham looked at Northern Pipe Line’s filings with the Interstate Commerce Commission in 1926 and found that it owned railroad bonds and other assets worth $95 a share, even though its stock fetched $65.] Specialization is an old and honorable Graham and Dodd tradition. Look at people like [noted value investors] Tom Russo and Mario Gabelli; they all have specialties. When you start out, you want to have an industry focus.

When asked about what he recommends to his students he said:

I tell them—which they don’t like at all—that they have to specialize. If you go to a firm, and they have you doing autos for one month and consumer nondurables for another month, and then they start you looking at financials, you aren’t going to master any of it. You are going to make stupid investment decisions, and they are going to fire you. You want to spend two to three years developing a specialty. When you get good at that, you can start to develop a second specialty. Once you appreciate what specialized knowledge of an industry looks like, then you have to be disciplined about looking in that area and at the disasters there. So if you have three specialties, two in industries hitting on all cylinders and the third is underperforming, where will you spend all your time? The underperforming one, so you can assess the probability of recovery.

Only through experience from having developed deep domain knowledge can one know when something is mispriced. As Warren Buffett has said, “If after 30 minutes of playing poker and you don’t know who the patsy is then you’re the patsy.” You don’t want to be the one selling too cheaply or buying too expensively due to insufficient knowledge resulting from being too much of a generalist.

The second interview I read was with Tom Siebel who founded Siebel Systems after great success at Oracle and then sold his company to Oracle for nearly $6 billion in 2005. He went on to start another company seven years ago. As an aside, he lived through being gored by an elephant and it took three years and 19 operations to recover. In the interview, he expresses his very strong and negative opinions about GE, IBM, and Oracle. He is asked about big companies working in key areas of technology and the challenges for small companies competing with them. His company is focused on being a leader in the Internet of Things (IoT) market.

Q: But you’re not the only one to see this. Amazon sees it. Microsoft, Google, IBM, GE … some of the world’s biggest and richest companies see it, too. What can C3 IoT bring to this space?

Siebel: Well, I think it’s a classic innovator’s dilemma problem. I mean, how did Siebel Systems ever pull off CRM? Larry Ellison had 3,000 people assigned to compete with us at Siebel for ten years. For Oracle’s investment in 3,000 engineers, Larry got less than 1% market share.

Q: GE wants to own the IoT market. What do you think about that?

Siebel: GE, seriously, is the world’s greatest 19th-century company. Its market value over the last 17 years has gone from $495 billion to about $250 billion. Nice job. I mean, these guys make valves, they make pumps. All of a sudden one day Jeff [Immelt] wakes up and decides, “Oh, I know what we are. We don’t really make valves and pumps anymore. We’re the world’s greatest 21st-century information technology company.” Is this a joke? Then he assigns 3,000 people and spends $3 billion to build a software stack that’s going to be about big data, predictive analytics, and IoT, and it’s going to revolutionize information technology.

Q: You compared Amazon’s AWS skunkworks, with its 12 people, to failed teams of thousands. Does it come down to size?

Siebel: How many important products can you think of in the history of the IT business that were built with 3,000 people? I mean, how many people built the first Microsoft product? Two. The first Oracle product? Twelve. How many people built SAP R1? Eighteen. How about the Apple computer? Four. How about the 4004 processor? You tell me the answer because I don’t know. Four? You can’t do anything with 3,000 people. So here we have GE, a big rust-belt industrial company, whose market cap has been in decline, deciding to take its 3,000 mediocre people and, say, build a software stack.

Now, $3 billion and 3,000 people later, I don’t believe they have one user in production. But I have 23 large-scale industry users in production around the world. IBM? What’s this thing they call “Watson?” Watson is an advertising fiction; it doesn’t exist. It’s a conglomeration of DB2 and a lot of professional services. There’s absolutely nothing there. So IBM and GE are spending hundreds and millions of dollars creating the market. The big sucking sound out there—which resulted in our bookings going up 600% last year—has been created by their marketing campaigns! IBM and GE are doing us a great service.

The Power of Specific Knowledge

Experientially I saw the power of specific knowledge in action during the trip. For many years I had wanted to visit Gettysburg Military Park and take a tour of the battlefields. I rallied the five other family members to go with me and we embarked upon the 2.5-hour drive west and then a bit south from Philadelphia on Mother’s Day. I had arranged for a guide to meet us to give the six of us a private, two to three-hour tour. Tour guide Ted met us at the appointed time, we walked to my car, he took over the wheel, and we were on our way.

I had mistakenly thought that the area was relatively small in terms of where the fighting took place. I was wrong. 6,000 acres are owned by the National Park Service out of the original 22,000 acres that were occupied on those three harrowing days between July 2nd and 4th 1863. Approximately 125,000 troops congregated there and by the end over 13,000 were dead and 37,000+ wounded, bringing the total casualties to more than 50,000.

Ted was an extraordinary guide. Talk about finding one’s calling! He said he worked 30 years in the steel industry in Pittsburgh and finally had enough. He never liked what he did and he blamed his father facetiously for having taken him to Gettysburg at age 10 and from that point forward he always knew he would someday be a guide at Gettysburg. 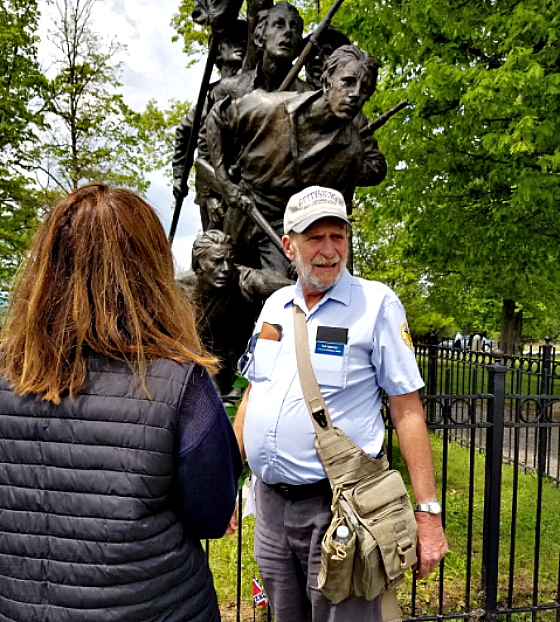 To be a licensed guide requires that one pass a four-hour written test with a score of 90% or more (he scored 97%) and then give a tour to another guide and park ranger. He accomplished this in 2001 and since then has given over 5,000 tours, including some two-day tours that have lasted 16 hours. He has over 2,000 Civil War books in his library and has read the 130+ volumes of post-battle reports written by participants. He said that the Civil War is the most documented war in history. Talk about deep domain knowledge! There was nothing he couldn’t answer about Gettysburg or the war and he did it with eager enthusiasm.

Ted brought the timeline, battles, and scenes to life for us as we gazed out on the most important places where history was made during those three days. Ted believes that had northern troops arrived at a spot five minutes later and not repelled the attacking company from Texas, it’s possible the German swastika could have been flying over the United States in the 1940s. I think this may be a bit dramatic but he truly believed that our system of government and economic and global strength and dominance would not be what it is today if the north had not won and preserved the union.

Ted was so good that even my daughter, who was not an enthusiastic participant in driving to Gettysburg and taking a tour because she stated, in her very sophisticated University of Chicago way, “I don’t like tactical history and I’m much more interested in 20th century American history,’ was deeply appreciative that I dragged her on the tour with us. The power of his passion and knowledge was infectious and taught us a lot in a short period of time. I highly recommend visiting Gettysburg. It’s a very moving experience.

And to end the trip the next day witnessing Rachel’s graduation after six very challenging years was a great way to wrap up the trip and honor and celebrate the dedication of committed and curious individuals to their areas of interest.

It’s wonderful to be in the presence of people who have found their calling.

Do you agree that a specialist will do better than generalists with the same level of intelligence?