I Didn't Build That! 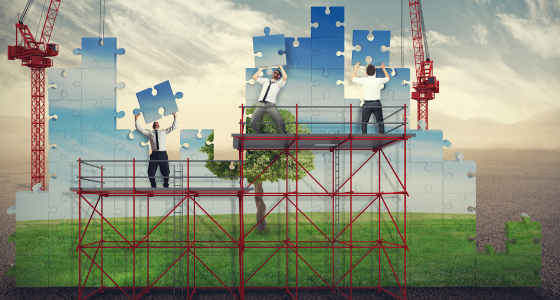 I have to confess that I’m feeling a bit guilty about something. A few weeks ago someone sent me a message on LinkedIn within 15 minutes (if not less) of me accepting his connection request. My usual experience with that one-two punch is not very favorable as it often relates to someone wanting to sell me something, often something not very applicable to my business. If they’re good salespeople, however, I’m sure they would argue differently by trying to overcome my objections.

This person was a bit different, however. He was in real estate and he wanted to have a call. I was reluctant to do so until I knew what he was looking for. It turns out that he was responsible for his firm’s capital raising and he wanted to know how I was able to have success in this arena. After revealing his intentions for us talking by phone I found myself pulling back even more even though it is something with which I have some experience. The operative word is “some” because of my experience, like most people is very specific and unique to me and my situation at CWS.

Other than suggesting that he work with friends and family first, I didn’t feel like I had much to offer. And why did I think that? If one were to look at CWS from the outside, then it makes sense that one would think I could be very helpful since when I started in 1987 we had approximately $250 million* in assets, all of which were manufactured housing communities, and now today we own only apartments that have a value of approximately $4 billion**.

So what gives? Why couldn’t I tell him what to do despite this impressive growth trajectory? The reason is that I started my career working with a great platform. As time goes by, I have come to realize how incredibly valuable that was and continues to be (even more so now). The firm was already 18 years old, it had a wonderful and loyal investor base that was cultivated one investor at a time, and it had the benefit of two entrepreneurial founders being actively involved and leaving their imprint on the growing organization. CWS also had a market-leading position in the manufactured housing communities as one of the nation’s largest owners and operators which helped us secure good deals and enabled us to procure competitive financing. We had a values-based culture, a strategic planning process that helped guide our decision making, and the resources to reinvest back into the platform in terms of people, geography, training, technology, etc. We also had the financial resources to field an acquisitions team and first-class property management organization and the capital to pursue opportunities and fund earnest money and loan deposits.

All of this makes me think of the controversial statement that President Obama made some time ago for which he got a lot of heat when he said the following:

“If you’ve got a business — you didn’t build that. Somebody else made that happen.”

Out of context, this statement can understandably be seen as derogatory by being dismissive of the accomplishments of entrepreneurs and seemingly has an underlying tone of being anti-business and capitalism. Like most things, however, there is more to what he said than first meets the eye.  If you read the full context of his remarks then what he said makes more sense and has great applicability to how I feel about having started at CWS. Here is his complete set of thoughts he communicated:

If you were successful, somebody along the line gave you some help. There was a great teacher somewhere in your life. Somebody helped to create this unbelievable American system that we have that allowed you to thrive. Somebody invested in roads and bridges. If you’ve got a business — you didn’t build that. Somebody else made that happen. The Internet didn’t get invented on its own. Government research created the Internet so that all the companies could make money off the Internet.

The point is, is that when we succeed, we succeed because of our individual initiative, but also because we do things together. There are some things, just like fighting fires, we don’t do on our own. I mean, imagine if everybody had their own fire service. That would be a hard way to organize fighting fires.

So we say to ourselves, ever since the founding of this country, you know what, there are some things we do better together. That’s how we funded the GI Bill. That’s how we created the middle class. That’s how we built the Golden Gate Bridge or the Hoover Dam. That’s how we invented the Internet. That’s how we sent a man to the moon. We rise or fall together as one nation and as one people, and that’s the reason I’m running for President — because I still believe in that idea. You’re not on your own, we’re in this together.

I can proudly say that I didn’t build it (CWS). I stepped into an amazing platform and was able to apply my talents towards helping it grow and making it stronger with some extraordinary partners and co-workers. Growing our investor base could not have happened without us meeting or exceeding investor expectations by us purchasing properties at compelling prices, financing them optimally, managing them to add value, and redeploying the capital into other opportunities on a tax-efficient basis via 1031 exchanges. And when times did get tough we had a strong enough relationship with our investors to enable us to manage through the challenges so that we never had to be forced sellers and we could have the staying power to capitalize on the ensuing recovery. To bring this about has taken an incredibly talented team and deep organization with a vast array of skill sets capable of delivering competitive, risk-adjusted returns that have met or exceeded our investors’ expectations. Their positive experience transformed what was initially a degree of confidence to invest with us the first time into a powerful bond of trust that has resulted in them in not only keeping their initial investment with us but adding new capital and feeling secure enough to refer friends and family. I didn’t build that (CWS).

I only know what I know and how I am wired. I’m not a natural entrepreneur but I can make a good partner with those who are. I am best positioned for success within a platform for business and my family. I need partners and a platform. By knowing myself I knew that I didn’t have much to offer to the person who wanted to speak with me because my journey is just that, my journey, and it has little to offer to someone who has different talents and inclinations and set of initial conditions. And most importantly, one lacking an incredible platform like CWS.

There is one piece of wisdom that I would have conveyed to him, however. And not surprisingly it’s from Bob Dylan (“I didn’t write that!”). He was interviewed in Rolling Stone in 2012 and two answers he gave were not only incredibly profound but extraordinarily applicable to someone who wants to build something for the long-term.

You’ve described what you do not do as a career but as a calling.

Everybody has a calling, don’t they? Some have a high calling, some have a low calling. Everybody is called but few are chosen. There’s a lot of distraction for people, so you might never find the real you. A lot of people don’t.

How would you describe your calling?

So find your calling and if you’re one of the lucky few you will be chosen. If not, then just try to be very good at whatever you do and, in the words of Sam Walton, “get after it and stay after it.” If you want people to invest with you then they have to believe you will be relentless in your pursuit of success and excellence, you have confidence in yourself without being arrogant, and you will be in it for the long run and you won’t let challenges derail you.

Now that I have confessed my guilt perhaps I should send him a message on LinkedIn thanking him for inspiring this blog post and sending him a link since without his message I may not have been inspired to think more deeply about the power of the CWS platform and how I didn’t build it.

How would you describe your calling?

**NOTE: This blog was originally published on April 30, 2017, the advice is just as relevant today as it was in 2017. All facts and figures presented are accurate as of that date and may have subsequently changed.

*A complete list of all CWS recommendations and current holdings is available upon request from our Investor Relations team. Please remember that past performance may not be indicative of future results.