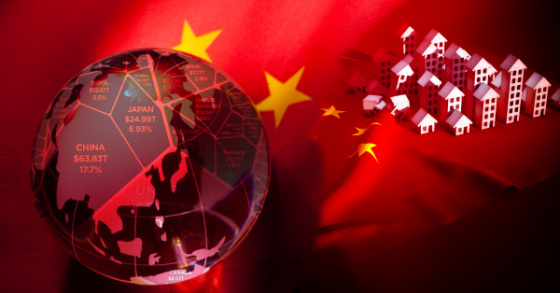 The evidence seems to be increasingly persuasive that economic growth is slowing materially. This is from the Economic Cycle Research Institute, which has a good track record of identifying turns in the business cycle. Its Weekly Leading Index is clearly showing a negative growth rate. 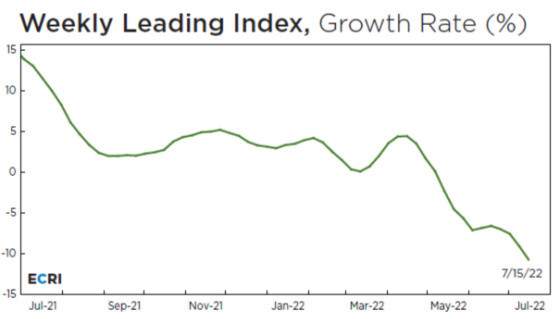 The Conference Board, which produces the Leading Economic Index, is corroborating economic weakness ahead. 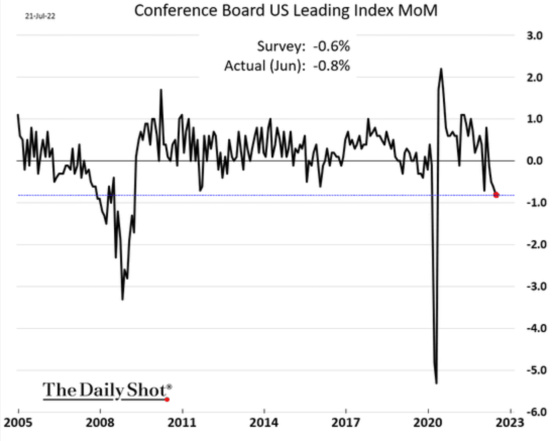 The Philadelphia Fed released its manufacturing indices last week, showing that its region is already in a manufacturing recession. 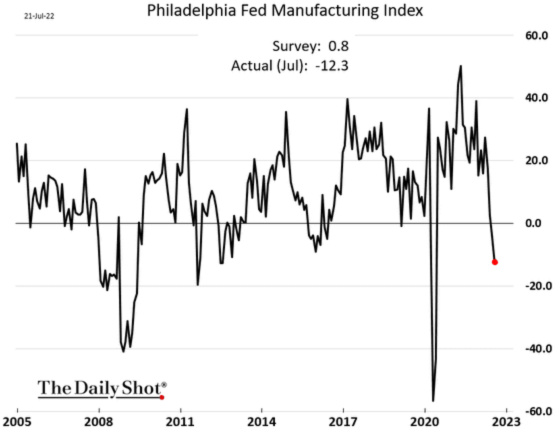 New orders have contracted, and the outlook for them is extremely weak. 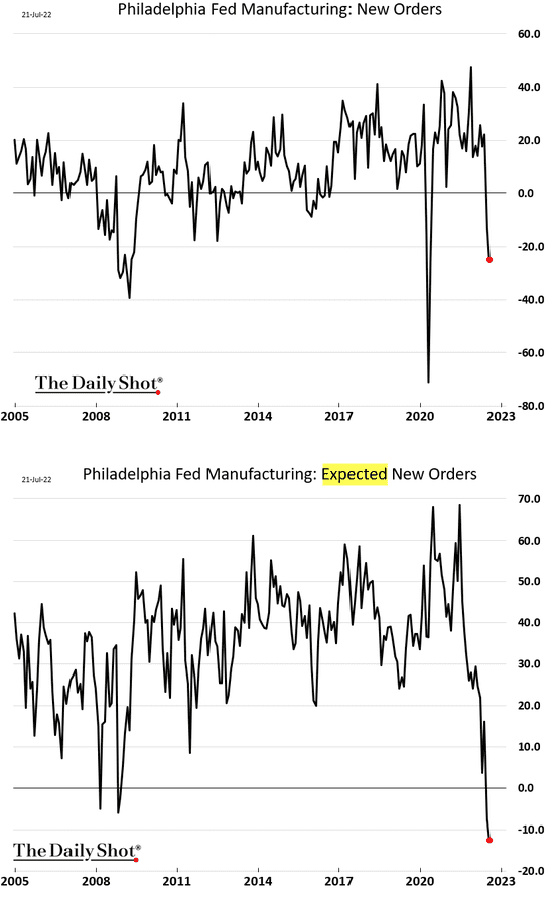 The overall outlook for expected conditions in six months is correspondingly quite weak as well. 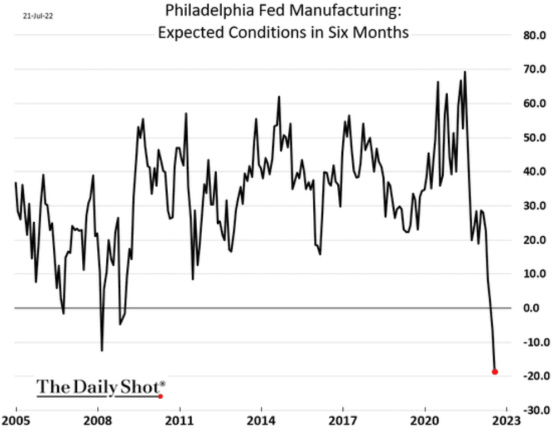 One can see that the bond market is screaming that a recession is ahead as short-term rates are now higher than long-term rates with the big drop in 10-year yields.

The most important indicator to watch going forward will be job numbers, which I would expect to start weakening materially. This will be the cover the Fed needs to slow down its pace of rate hikes provided that inflation starts coming down. We are already seeing initial jobless claims climbing, albeit still at a low level. I will be watching this closely as I expect to see it climb materially higher over the next six months. 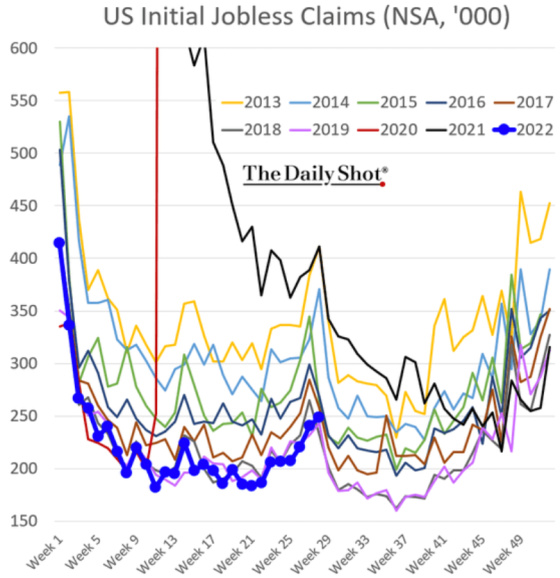 Another headwind for the global economy is China and the economic pains caused by its Zero Covid policy as well as its deflating real estate market. To create some context for the magnitude of China’s real estate market, here is a chart showing the breakdown of global wealth. 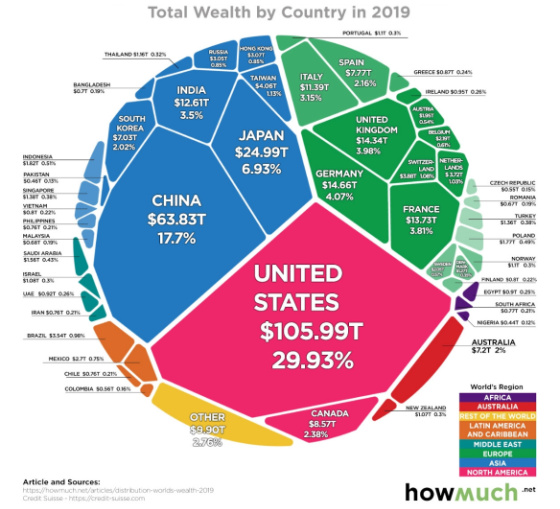 On a global basis, about one-third of assets are in real estate, according to this chart. 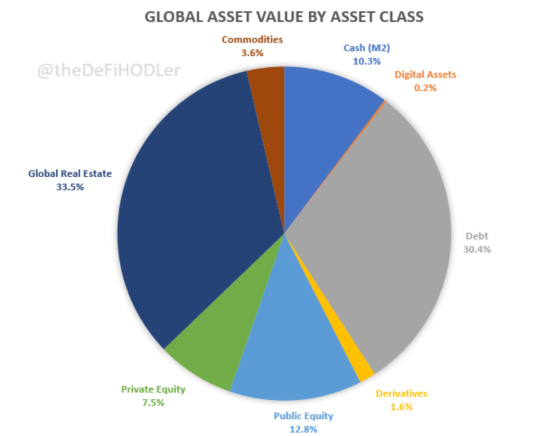 For China,  however, its concentration in real estate is much higher. There may be some apples and oranges in terms of the numbers cited in an article from Business Insider about China’s real estate woes and the allocation of global wealth, but the point that I will be trying to make is that China is highly concentrated in residential real estate and that market is deflating which is having, and will continue to have, negative economic repercussions for the world in terms of growth, although it may take some pressure off of commodity prices.

China’s real-estate sector is huge. According to Goldman Sachs Group Inc., the total value of the market hit $52 trillion in 2019 — twice the size of the US residential housing market, The Wall Street Journal reported. The sector accounts for 29% of China’s gross domestic product (GDP). And its cities are growing rapidly: In 2019, China recorded a 60% urbanization rate. 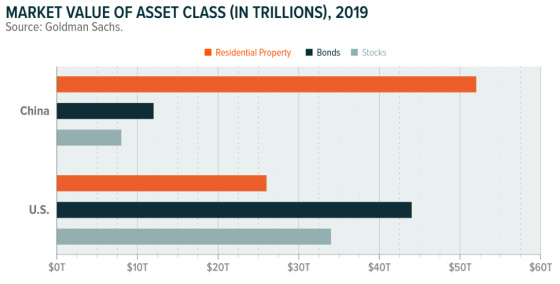 China is notorious for wasting resources on ghost cities and infrastructure in order to ensure that it hits its economic growth targets so that local governments don’t find themselves in hot water with Beijing. There is a tremendous amount of empty homes in China as a result. 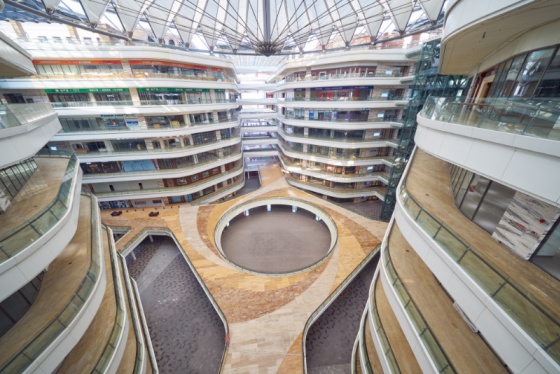 But a lot of that real estate is empty. An estimated 65 million homes — 20% of the total supply — in China are unoccupied. Not only is this high by international standards, it means there are enough empty houses in China to house the entire population of France.

In the Grateful Dead song, Casey Jones, Jerry Garcia sings, “Trouble ahead, trouble behind. You know that notion just crossed my mind.”Click To Tweet

What crossed my mind is how China is all in on real estate as the homeownership rate is incredibly high, the number of unoccupied units is enormous, and the pipeline of future buyers is going to be shrinking along with China’s population. The trouble ahead is largely caused by the trouble behind China’s overreliance on incentivizing growth and overinvestment in real estate and its one-child policy, leading to a population that will be rapidly shrinking.

Here are some more excerpts from the article discussing China’s incredible concentration in residential real estate.

More than 90% of households in China are homeowners, according to a January research paper on homeownership in China from the National Center for Biotechnology Information. The US, for comparison, has a 65% homeownership rate.

According to Moody’s estimates, 70-80% of Chinese household assets are tied to real estate, CNBC reported in August.

That’s more individual wealth tied to real estate than in just about any other developed country; Sun said: “In the west, people diversify their investments, and the majority goes to capital markets.” But in China, where the capital markets are less developed and highly volatile, people keep much more of their money invested in real estate.

And now, let’s turn to China’s demographic outlook, which is quite challenging, to put it mildly.

This population projection assumes that Chinese women start having more children than they have. Even with this assumption, there will still be a huge drop in the working-age population. This doesn’t bode well for future housing demand. 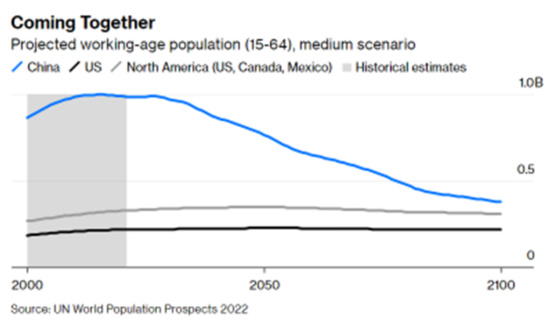 And if the low fertility rate continues, then the prospects are even more dire. 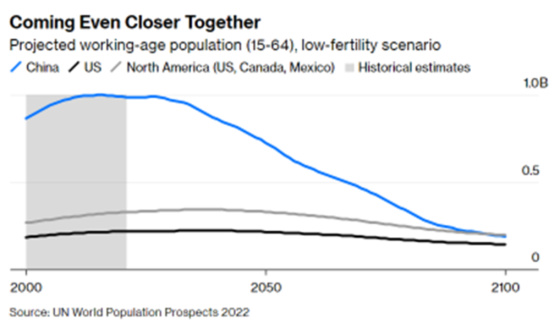 Combine a deflating real estate market with China’s suffocating Zero Covid policy, and you have a disastrous job market, especially for young people looking for their first jobs. 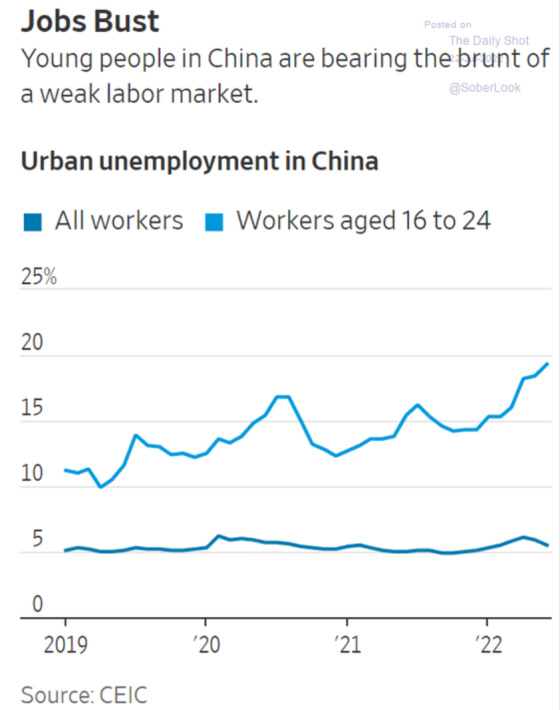 Real estate developers had been expanding aggressively by purchasing land from local governments for new housing developments. This was a big source of revenue for local governments, which is now drying up as developers are having to cut back due to financial stress.

Unfortunately, almost every major developer in China is in financial distress. Bond prices have collapsed, which means investors are pricing a high probability of default and bonds not being repaid in full. 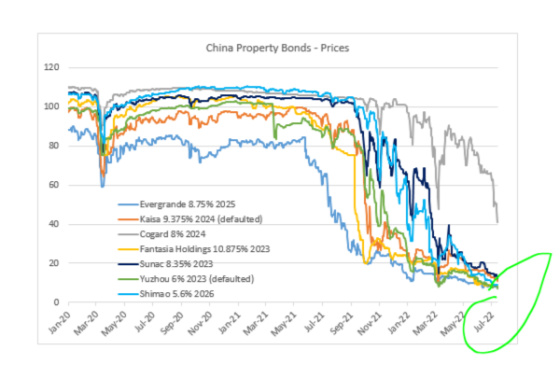 This is what happened to the stock price of a property developer that swapped maturing debt for new debt, which is effectively a default. 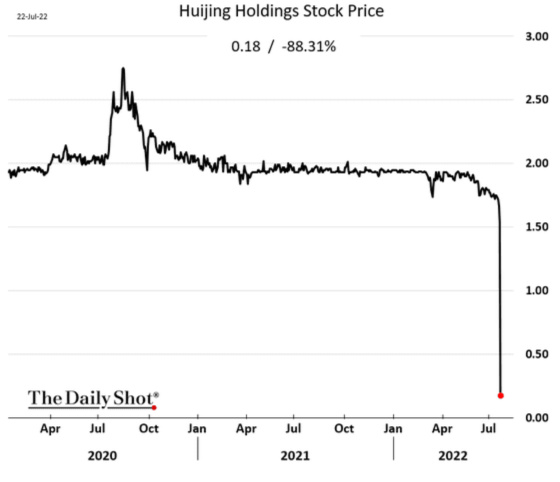 Unlike in the United States, in which prospective home buyers put down a deposit to secure the rights to buy a home that is under construction, Chinese purchasers pay for homes while they’re under construction. Most people take out mortgages to help finance the purchase. With developers in such financial trouble, they have stopped construction on many projects, thereby delaying the completion of a very large number of homes. This has left large numbers of people still having to service their mortgage debt with no prospects of occupying their homes. 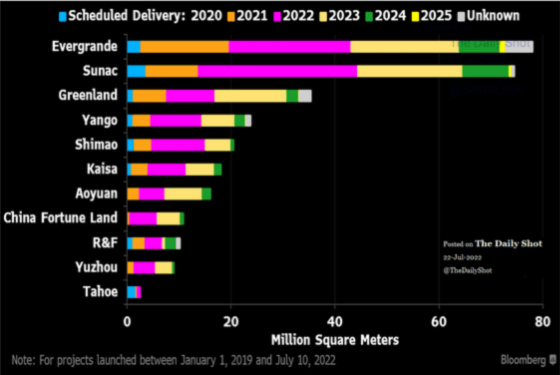 This situation is untenable, and a tipping point of anger and outrage has been reached, leading to a very atypical reaction among typically very compliant Chinese citizens. There is now a mortgage revolt going on in which large numbers of people have refused to pay their mortgages until their homes are delivered to them.

Here is a map of where some of the revolts are taking place. 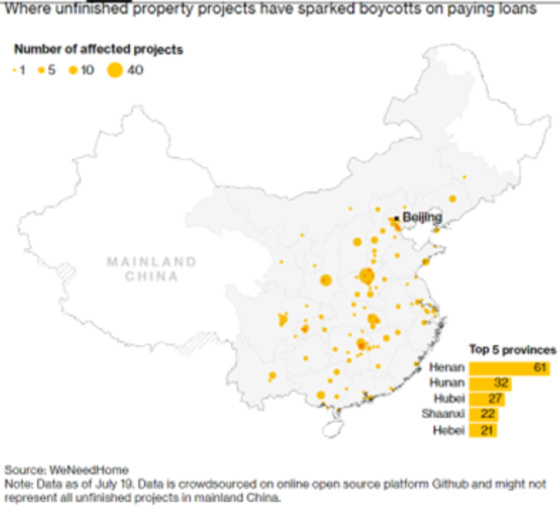 With developers under such financial distress, they have tried to preserve cash by not paying some of their suppliers or paying them very slowly if they do. Taking a cue from jilted home purchasers, some suppliers are now following suit and refusing to service their debts as well.

China has some enormous challenges ahead. There is no way its growth will come close to what it has been over the previous 20 years. The Chinese leadership is now coming to terms with this as well and is lowering its targets, although many would argue that they are still too high given the huge overinvestment in real estate and the atrocious demographics on the horizon. This will result in a huge headwind for global growth and should be a contributor to keeping a lid on short-term rates exceeding 3% for any material length of time. I’m still betting on them being at 2% or under by 2024.