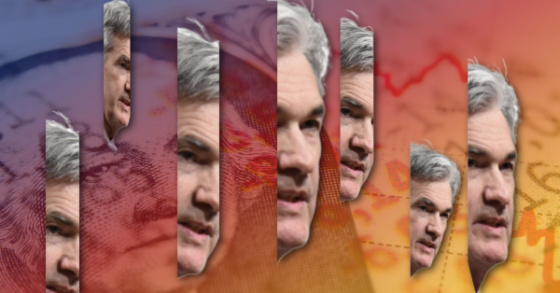 In my 35 years working at CWS and the years before that in college, when I first started taking economics classes, the most common term to find the equilibrium to determine optimal price has been “supply and demand.” I have also come to learn that words matter, particularly so from people who are in power or have great influence. Federal Reserve Chairman Jay Powell clearly wields both enormous power and influence as he controls monetary and interest rate levels. So when he speaks, I, along with countless others, pay close attention.

Last week was the Fed’s Jackson Hole conference, which is one of the most important symposiums in the world to discuss monetary policy, and economics for the Fed Chairman to give the keynote speech to convey to the world what the Fed is thinking. Given everything going on in the world and how inflation got far beyond what the Fed ever expected, this speech was eagerly awaited.

I read a summary of his prepared remarks from Bloomberg as well as the reaction market participants had to it. Here is the headline from the article.

Powell has clearly shown a willingness to pivot, and when he does, he can be as militant as a reformed smoker.Click To Tweet

I can’t say I was surprised that this is the message he wanted to convey. Powell has clearly shown a willingness to pivot, and when he does, he can be as militant as a reformed smoker. When he changes course, as he did in late 2018 and early 2019 after Trump’s non-stop criticism and the market screaming for a loosening of policy and then how dovish he became during Covid, he changes his message and sticks with it until he is required to shift again.

So what were the words that really mattered to me that I read from his speech? It’s this:

“Restoring price stability will take some time and requires using our tools forcefully to bring demand and supply into better balance,” Click To Tweet

Given how ubiquitous the term “supply and demand” is in the economics world and how rarely the reverse is used, I cannot imagine there is any chance that he used the term “demand and supply” without great intentionality. When I think about “supply and demand,” I first think about supply reacting to demand to maximize profitability. To get more formal,  here is the definition from the Oxford Dictionary:

The amount of a commodity, product, or service available and the desire of buyers for it considered as factors regulating its price.

And while supply and demand are clearly not independent of each other, my visceral reaction when thinking about supply and demand is that it’s more supply influenced. All of this brings me to Powell turning the phrase around by using “demand and supply.” This clearly tells me that the Fed does not believe there is much the Fed can do about supply given all of the issues with the global supply chain, Covid labor force reductions, much greater labor mobility, higher costs, etc. What the Fed can do is focus its sights clearly and unequivocally on demand because it will be demand that will need to adjust downwards to get it more in balance with what is perceived to be an inelastic supply. After all, wasn’t it very heightened demand that got us into this mess, to begin with?

Powell also made clear what the overall goal is.

Powell’s use of demand and supply is quite timely because it coincides with the recent release of research by the New York Fed entitled How Much Did Supply Constraints Boost U.S. Inflation? While Powell is focused on demand destruction, he does acknowledge that there have been supply constraints, but this should not stop the Fed from acting aggressively to curtail inflation.

Even if some of the current high inflation reflects constraints in the economy’s ability to supply goods, services, and workers, Mr. Powell said the Fed couldn’t cite those as reasons not to raise interest rates, as some elected officials have suggested.

“Our responsibility to deliver price stability is unconditional,” he said. “We are committed to doing that job.”Click To Tweet

The New York Fed’s research attributes approximately 60% of the inflation spike to a demand shock from the huge fiscal stimulus unleashed during Covid and 40% to supply shocks. The following chart shows the breakdown. 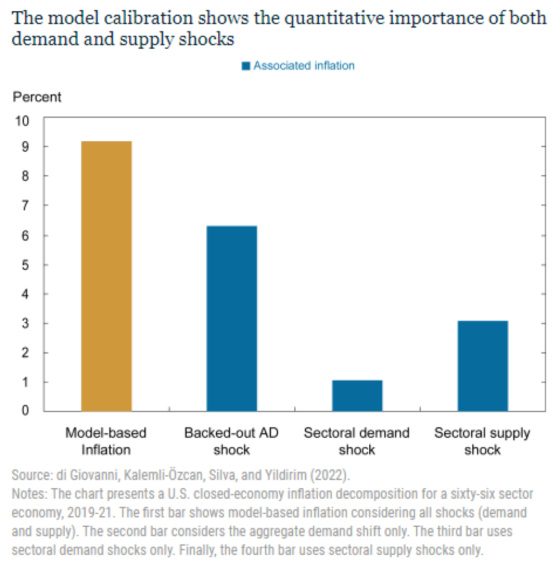 The researcher believes that had supply disruptions not materialized, then supply and demand would have been much better calibrated, and inflation would have been approximately 3% lower.

The bottom line of this decomposition is that supply constraints magnified the impact of higher demand in inflation. Consequently, most sectors in the U.S.—fifty-eight out of sixty-six—were supply-constrained. This result is consistent with other research that shows that expansionary fiscal policy has increased the share of sectors classified as supply-constrained.

Thus, it appears that Powell is right to use the term “demand and supply” since this research shows that the much greater demand came at a time when most sectors of the U.S. economy could not ramp up supply to meet the heightened demand due to various constraints.

And yet, he may be fighting a battle that is already dissipating, and why he shouldn’t completely ignore supply chain improvements (more on this below).

Put differently, fiscal stimulus and other aggregate demand factors would not have driven inflation this high without the pandemic-related supply constraints. In the absence of any new energy or other shock, it is, therefore, possible that the ongoing easing of supply bottlenecks will cause a substantial drop in inflation in the near term.

Powell’s conundrum is that he is ignoring the supply side of the economy, which the research shows had a material impact on inflation at a time when it is improving, and yet, price pressures still abound.

The following charts will hopefully show how Powell is probably fighting a war that is taking place in his rearview mirror as supply chain pressures are improving and other indicators are weakening along with inflation expectations dropping.

Here is the New York Fed’s Global Supply Chain Pressure Index. One can see that, while still elevated, it is clearly on a downtrend, and with the charts that follow, I don’t see this stopping as supply chain pressures appear to be easing materially. 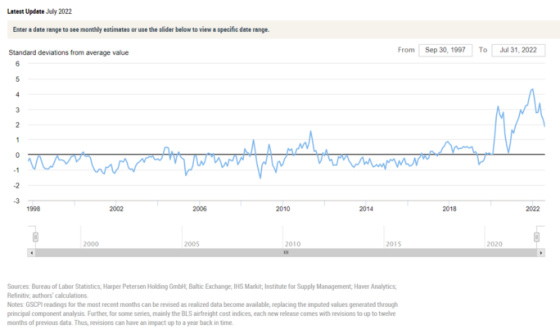 Manufacturers can secure inputs much more rapidly now based on this regional report. 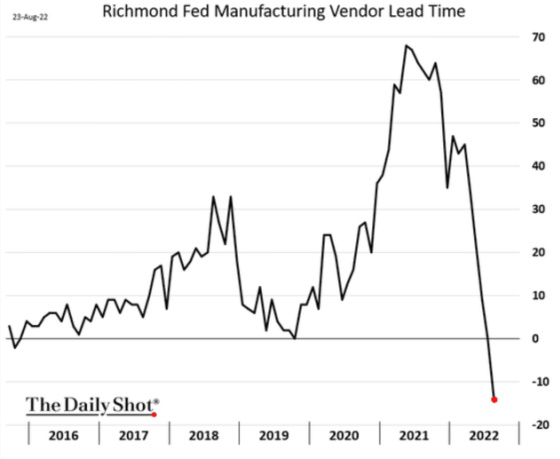 This is happening because demand is dropping as the backlog of orders has contracted quite significantly among survey participants. 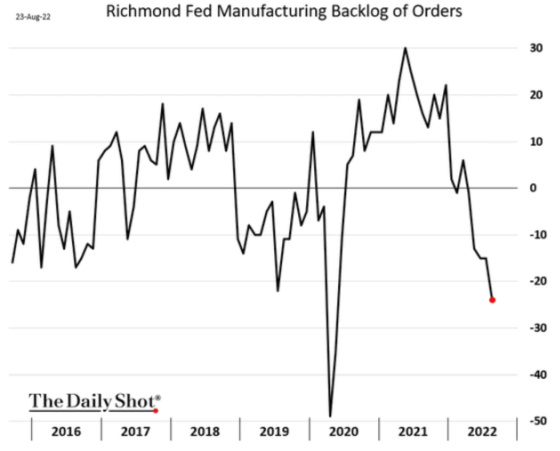 In the Kansas City region, manufacturers are cutting labor hours in the face of weakening demand. 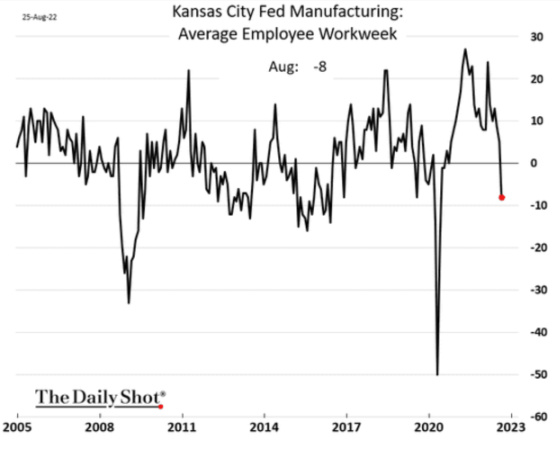 New orders in many regions have dropped sharply. 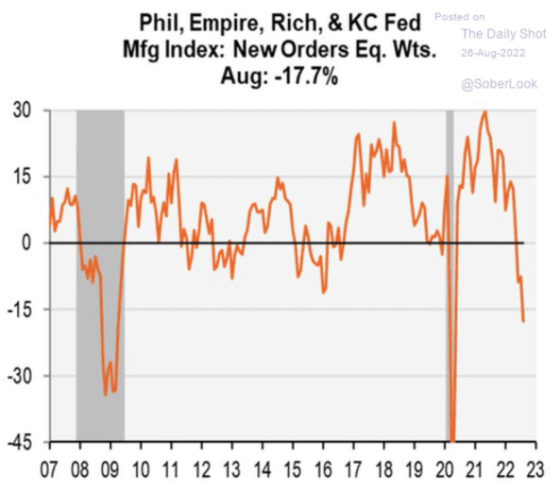 This chart combines multiple regional indices to come up with a national index to measure the degree of pressure or slack in the supply chain. One can see that unfilled orders have dropped significantly in August and that it would appear that delivery times will be following when the next report comes out. 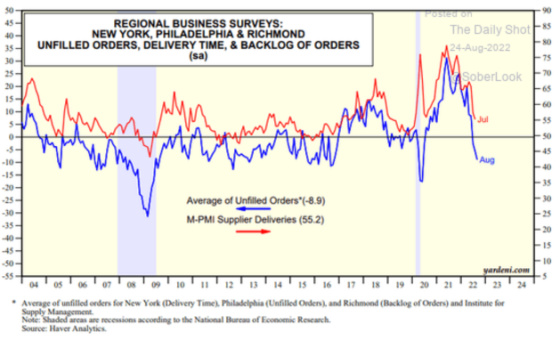 And yet, here is Powell’s conundrum and why he doesn’t want to rely on an improving supply chain situation to make the assumption that inflation will come down. 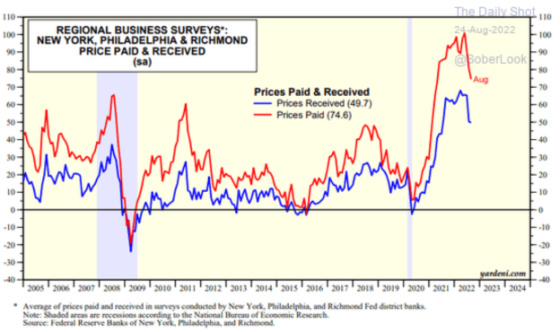 He has to take action to bring inflation down now, even if it causes pain for households and businesses, and forward-looking indicators like supplier delivery times, unfilled orders, leading indices, inflation expectations, and housing are all moving in disinflationary directions. 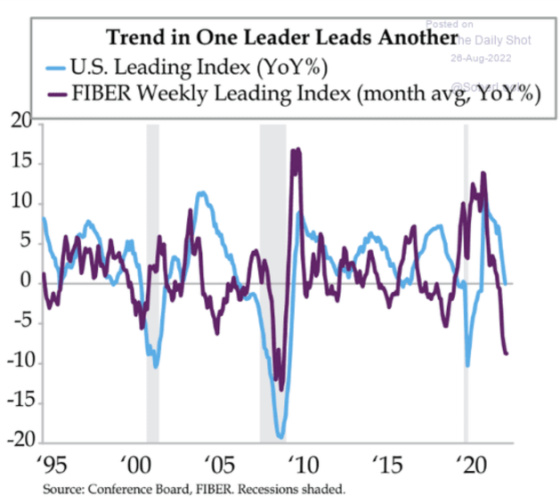 The demand for new homes has dropped sharply. 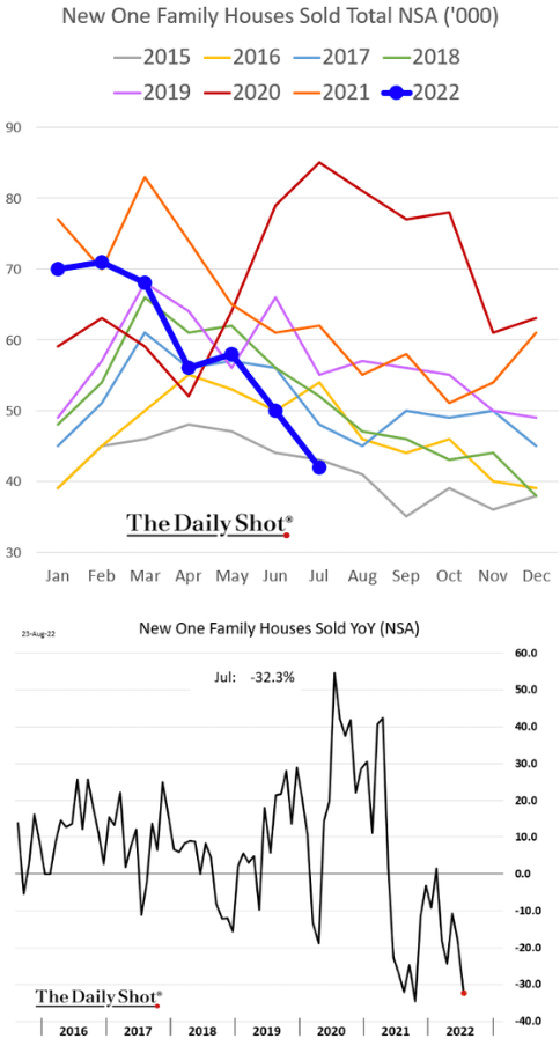 The collapse in demand in the face of increasing supply of new homes has resulted in the number of months of supply skyrocketing. 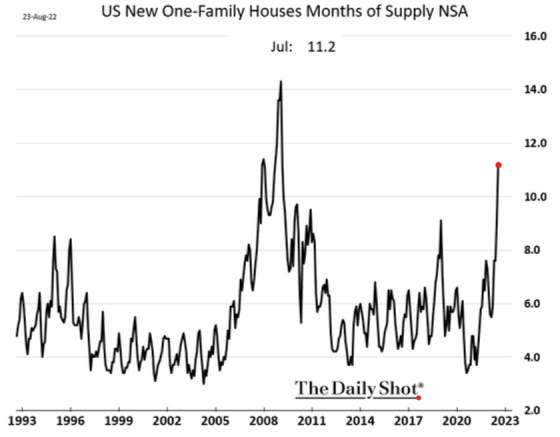 Powell wants immediate results despite so much evidence that inflation will be dropping quite materially over the next year. Unfortunately, instead of taking the attitude of Aaron Rodgers, who famously said the following after getting off to a poor start in 2014,

“Five letters here just for everybody out there in Packer-land: R-E-L-A-X,” Rodgers said Tuesday on his ESPN Milwaukee radio show. “Relax. We’re going to be OK.”

Powell is acting more like the character David Byrne sings about in the Talking Heads classic Psycho Killer.

I can’t seem to face up to the facts

I’m tense and nervous, and I can’t relax

I can’t sleep ’cause my bed’s on fire