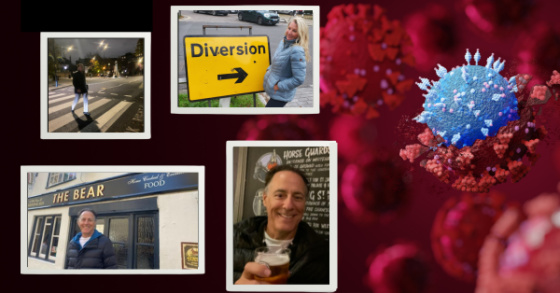 With the Omicron variant, originally called Nu, capturing global headlines and concern that it is so different from other variants due to the number of mutations it possesses, there is deep concern that the global economy will go back into lockdown mode. As of this writing, just after markets opened on Friday, the stock prices of energy, travel, and retailers were getting hit while stay-at-home beneficiaries like Zoom and Peloton were popping.

This graphic shows how the major indices were all in the red and how the VIX, which is an index related to financial market volatility, exploded higher as investors wanted to buy protection against heightened uncertainty.

Bond yields dropped back down to their pre-runup levels on fears of slowing economic growth, or even contraction, and a Federal Reserve that may not be able to tighten as quickly as investors were pricing in. 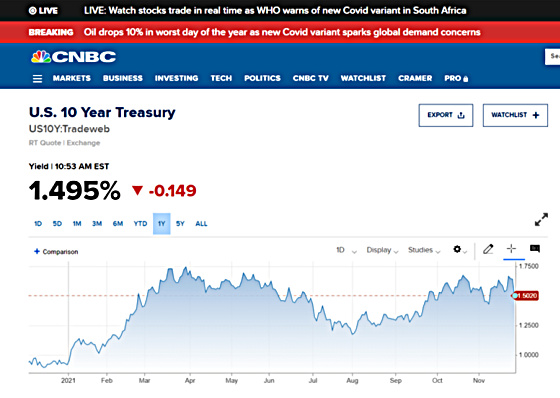 If the Omicron variant is as problematic as some fear, then international travel may not only be less enticing but potentially off-limits. Countries have already banned flights from South Africa as this is where the variant has been identified and most prevalent. In addition to South Africa, there are already cases of it in Belgium, Hong Kong, Botswana, and Israel.

I have been meaning to share some pictures from my recent London trip but other issues took precedent. Since last week was Thanksgiving and a slower week, I thought I would take the time to do it with this blog post, although it feels a little somber given the world’s reaction to the Omicron variant. With that being said, there’s nothing really Nu (original name) under the sun as history repeats and rhymes. We’ve been through this before and I’m sure we’ll go through it again.

Let me first start off by showing my negative Covid test that I took within 48 hours of landing in the U.K. This is required by the U.K. authorities. To return to the United States also required a negative test within 72 hours prior to taking off. 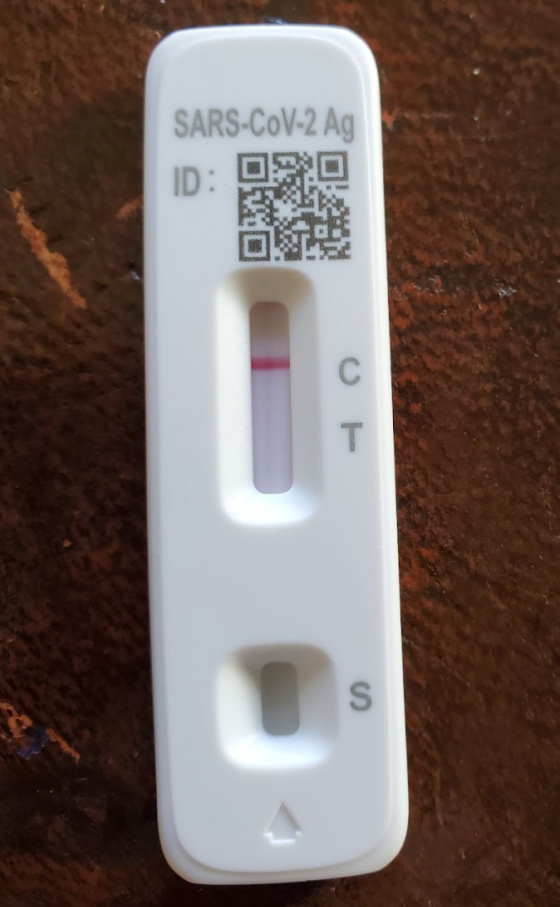 I can’t wait to watch Get Back, the new Beatles documentary by Peter Jackson. Surprisingly, even though I have visited London at least seven times (I have lost count), I have never been to Abbey Road Studios. Here is the street name that is only a short distance away from the studio. 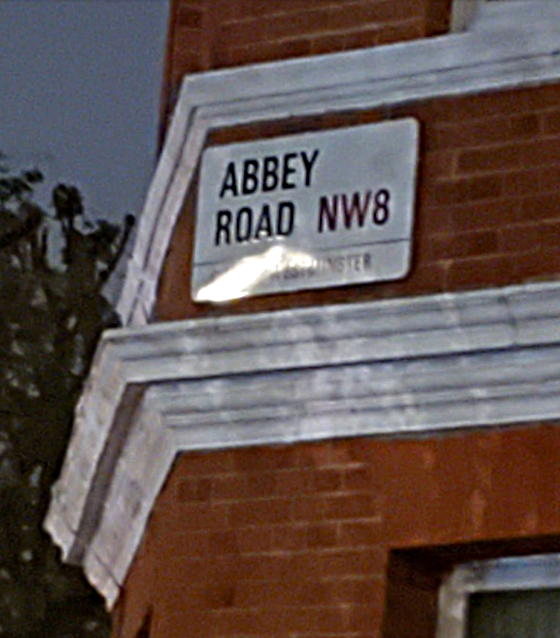 We turned the corner and just a short way away on the left there she was! I was traveling with Heather and she sweet-talked the security guard into letting us in to take a picture in front of the entrance. There was an event going on that night so visitors weren’t really allowed in. I played kind of dumb and walked in the doors, took a quick peek, and then heard the guard yelling that he didn’t give us permission to go in the studio, only to take pictures from the outside. 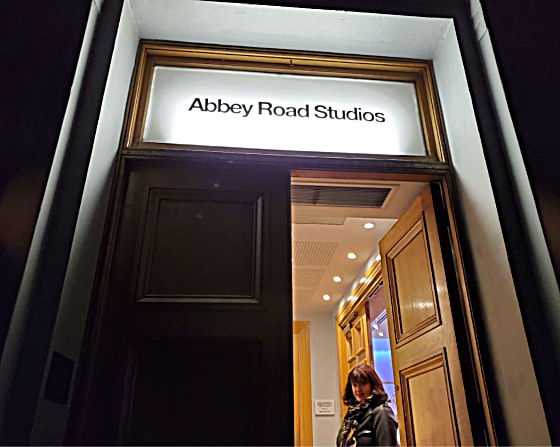 This is the famous cover of the album Abbey Road. 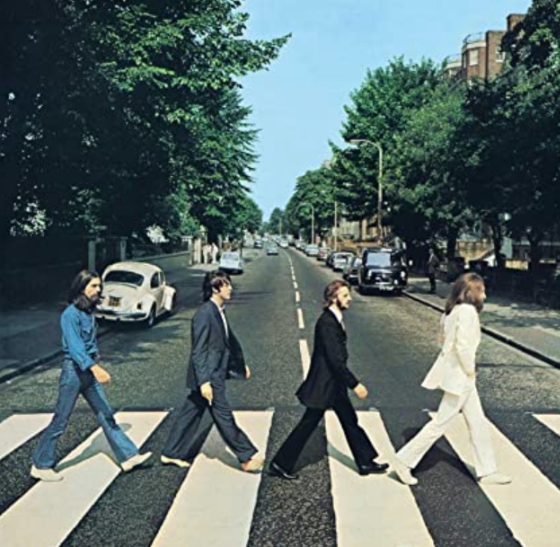 I so wanted to do some kind of replica crossing the same crosswalk but this is the best I could do given the traffic on the street and it being at night. Oh well, at least we tried. 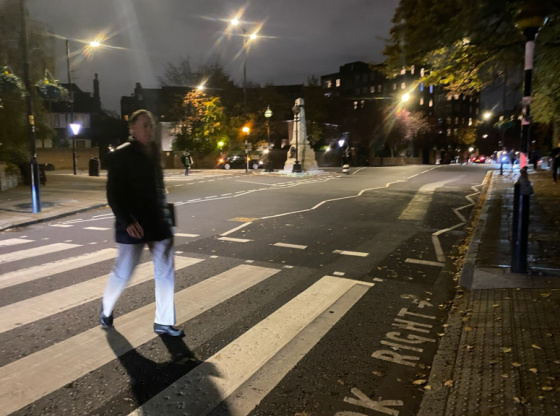 We spent one day at my one-semester alma mater from 1985, Oxford University. This is Exeter College where I studied. 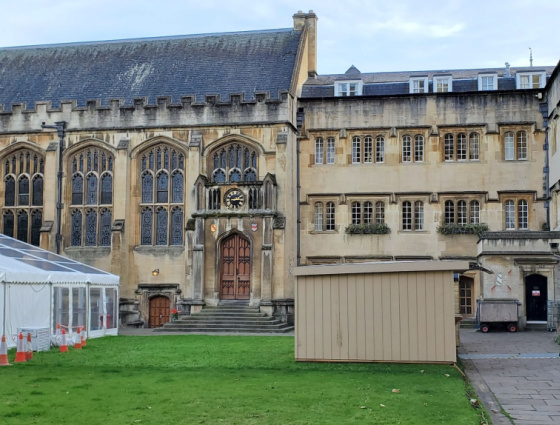 This pub is one of the oldest in England and Oxford’s most famous. It was built at a time when people were much shorter so the ceilings are quite low. The original building was constructed in 1242 but this one has been around since the early 1600s.

When we arrived in London there were protests taking place in Trafalgar Square which was near our hotel. Many streets were closed off and the cabbie said that if we wanted to be dropped off at our hotel then it would take another 20 minutes. We were so done with the long drive that we said just let us off here. We had to schlep our bags down into this alley area which was the home of a church that turned out to be where the royal family worships. This church official saw us rolling our very large suitcases and was admittedly perplexed and asked where we were going. We told him The Savoy. He said it was on the street above the church but necessitated us going up a lot of stairs and then taking a little bit of a walk to get to the hotel. He offered to help us with our bags and encouraged us to attend services the next morning as there would be a baptism. What a nice man! Another man helped point us in the right direction. He complained about the protests and said that the British were now turning into the French. He said he was very happy to see visitors like us returning to London. What a great way to start our trip. We got some unexpected exercise and met some wonderful people. 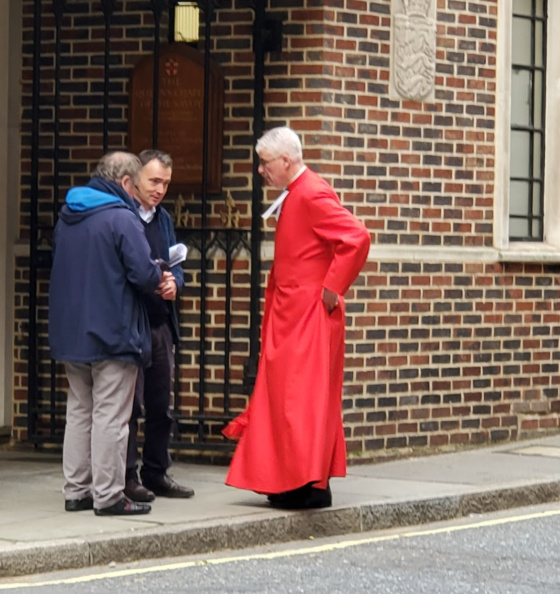 I do love some British expressions. I had to take this picture. Hopefully, this won’t be the case for the apartment business in the United States. 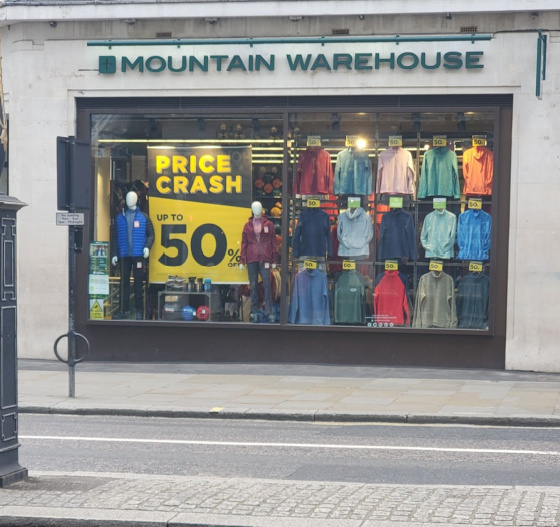 We got off a bus in Mayfair and Heather noticed this interesting building, which of course I was completely oblivious to, and she said we should go in. I am sure glad we did as it was a former church converted into a food court! What a unique and spectacular setting. 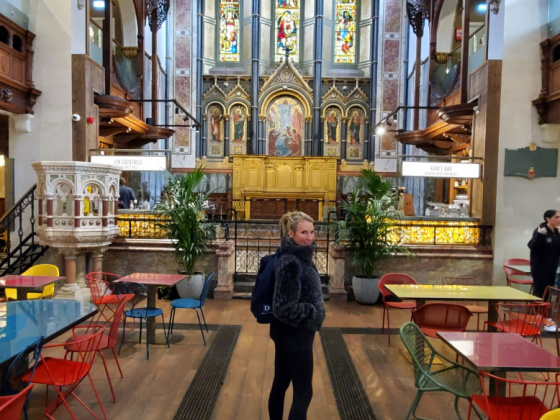 What would a visit to London be without having a beer in a pub? 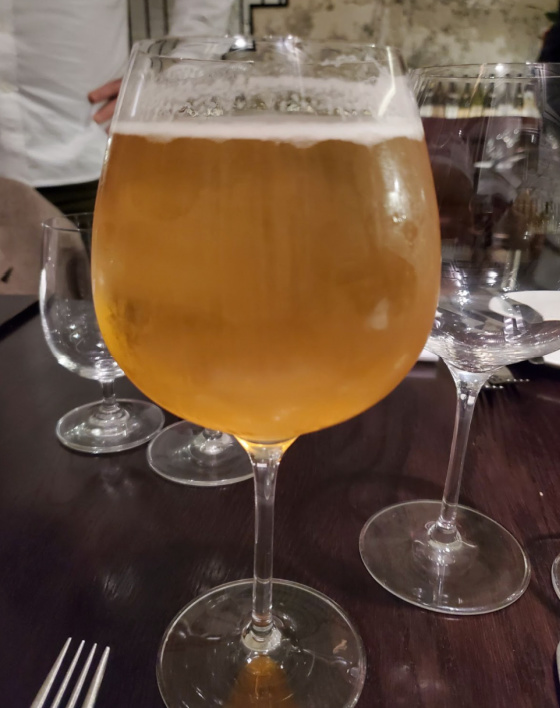 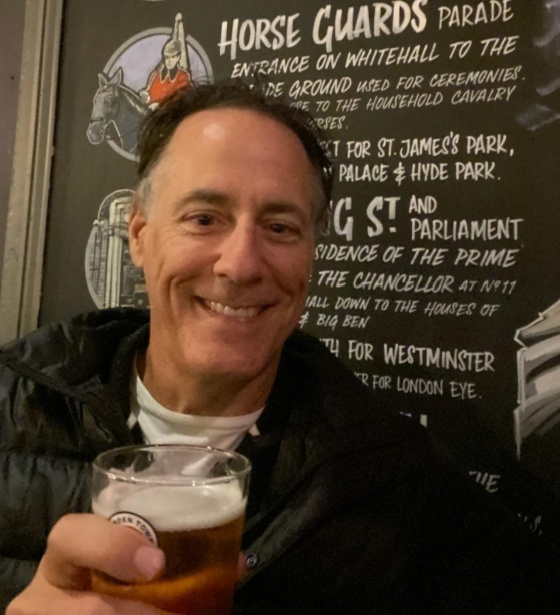 Something inspired me to research where George Michael lived. At dinner one night with one of our London insurance brokers I was talking about that and he said that George Michael’s home was not too far from where he lived in Highgate. I also brought up Liam Gallagher from Oasis and wondered where he lived as well. He said he too lived in Highgate and he told us what his favorite pub was. That settled it. We had to make a journey to Highgate to see George Michael’s home, who also happened to live next to Kate Moss, and to go to Liam’s favorite pub on the off chance we may see him.

Highgate was beautiful. On our journey to find George’s home, I saw this sign and thought a picture of Heather next to it was quite fitting. Even with her eyes closed, she can still be a diversion. 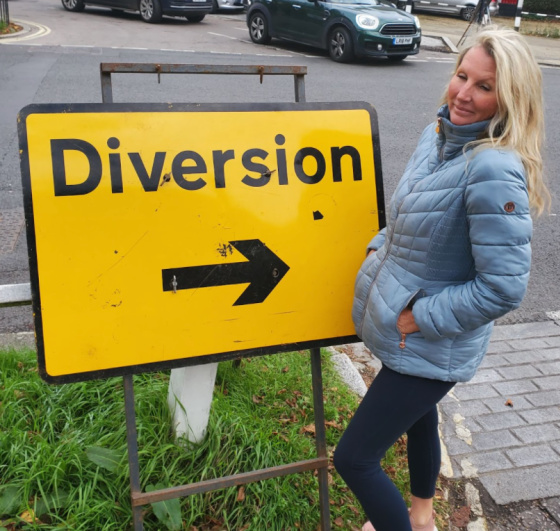 Despite her diversionary attributes, nothing was going to get in the way of our mission. We did find the pub and had a great lunch but Liam was not there. After walking through different areas of Highgate, which is absolutely beautiful and charming, we finally found the house, as well as the neighbor’s Kate Moss. George’s is on the left and Kate’s on the right.

It was quite a hot property as it sold in 2020 for far more than expected.

I mentioned earlier how I love some British expressions. Here is another one that tickled my fancy from the article about the home being sold.

The couple is understood to have “swooped in” and gazumped a keen buyer after hearing via a local network that the house was being sold off-market via an agent who was approaching a handpicked pool of wealthy potential buyers and had received a number of offers. The Highgate Literary and Scientific Institute and the Highgate Society are among community organizations where the great and the good of Highgate mingle.

Unfortunately, we didn’t have time to mingle with the great and good and I’m happy for the couple that gazumped a keen buyer as it looks like they are doing nice things to the home.

I was on another real estate mission and that was to find hedge fund mogul and market maker Ken Griffin’s home that he purchased in London.

We ended up finding it and it is in a fantastic location. It’s on the path to Buckingham Palace while also being close to a great part of urban London. 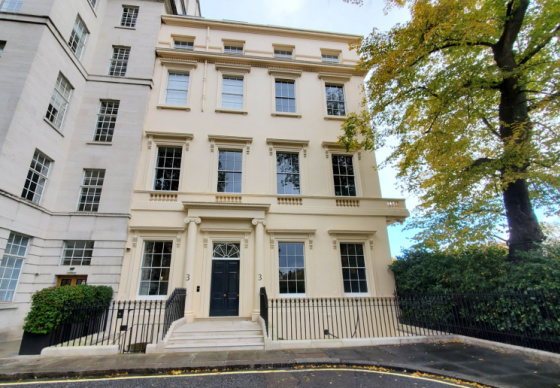 If you want to read about one of the most incredible sprees of luxury home purchases by one individual then peruse this about what Ken Griffin has purchased over the last few years.

And while there are many more photos I could share, I thought it would be best to keep it short and sweet and leave you with a picture of the great Winston Churchill from the War Rooms. It is the underground bunker where he led the war effort in the early stages while London was under assault by the Germans in what was known as the Blitz that took place between September 7, 1940, and May 11, 1941.

Churchill was a great writer and orator and yet he never shied away from reality, which is something I deeply admire. Obviously writing is quite central in my life and I try to learn from those who are and were masters of the craft. We all want our words to live on forever. I love what Beverly Nichols said about Churchill in the following graphic and is something I aspire to. 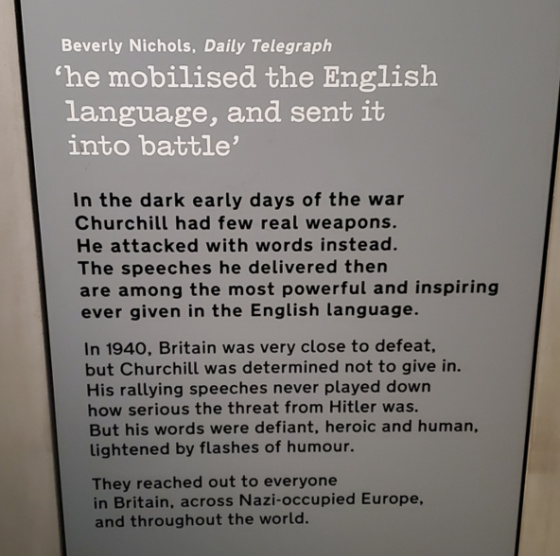 This is what Churchill said in the House of Commons to rally the nation in the face of the German Blitz.

“The British Empire and the French Republic, linked together in their cause and in their need, will defend to the death their native soil, aiding each other like good comrades to the utmost of their strength.”

“Even though large tracts of Europe and many old and famous states have fallen or may fall into the grip of the Gestapo and all the odious apparatus of Nazi rule, we shall not flag or fail.” 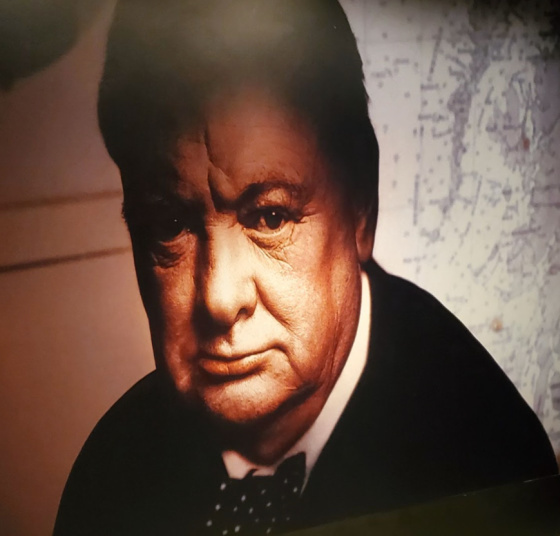 An estimated 40,000 civilians died during the time of the Blitz, with 20,000 of those in London. Covid has killed an estimated 144,000 in the U.K. of which 126,000 were in England. To put some of the Covid restrictions in perspective, I suggest reading about how Great Britain prepared for the Germans to attack.

The British government had anticipated air attacks on its population centers, and it had predicted catastrophic casualties. A Luftwaffe terror bombing attack on the Spanish city of Guernica (April 26, 1937) during the Spanish Civil War had killed hundreds of civilians and destroyed much of the town. On September 1, 1939, the day World War II began with Germany’s invasion of Poland, the British government implemented a massive evacuation plan. Over the course of three days, some 1.5 million civilians—the overwhelming majority of them children—were transported from urban centers to rural areas that were believed to be safe. The mass relocation, called Operation Pied Piper, was the largest internal migration in British history.

I hope you had a wonderful Thanksgiving.