A Race Against the Variant(s) 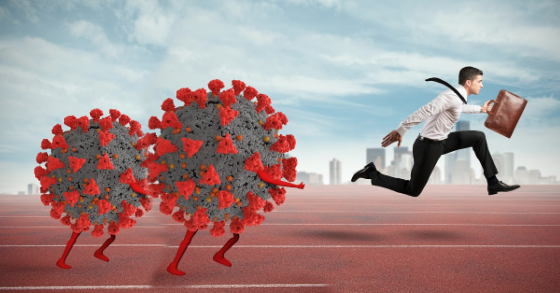 When it comes to tracking Covid trends there are a few indicators to which I pay close attention. The first is hospitalizations as this is the variable that Governors are most closely watching (as well as ICU capacity) when it comes to implementing restrictions on businesses and personal behavior. If hospitals become overwhelmed then care will have to be rationed and people will die or have worse outcomes than would otherwise be the case because they can’t get treatment or they are not able to address medical issues in time before they become much more problematic. And of course, the vast majority of Covid deaths occur in hospitals so this is an indicator of future mortality levels.

As of now, we have seemingly reached a peak for this cycle in hospitalizations as the following chart shows. 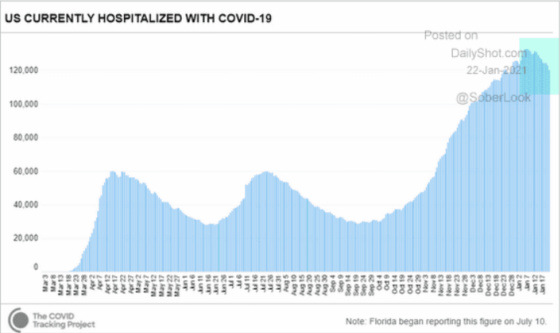 Why do I think we may have peaked?

The next indicator, I look at www.rt.live.com which is the retransmission rate estimates for each state. One can see from the following chart that most states now have a rate of less than 1.0 which means that an infected person is now passing it on to less than one other person. This is critically important to slow down transmission. When it’s over 1.0 then infected individuals are passing it on to more than one person which can result in rapid growth in infections. 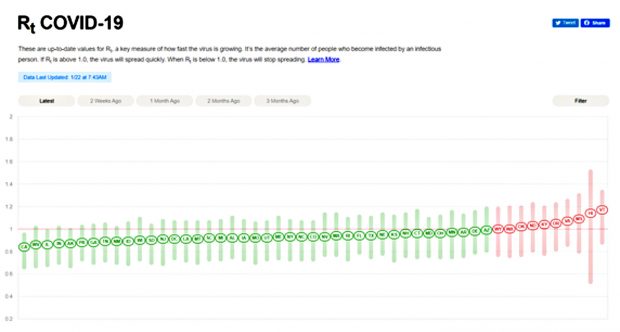 The chart above is not easy to read but California now has the lowest RT rate at an estimated 0.84. This is down from a peak of 1.17 in mid-November. Interestingly, three months ago 49 states had RT rates above 1.0. As of January 22nd, this was down to 10.

After knowing very few people who had Covid, this has changed dramatically for me over the last couple of months. With that being said, it looks like the trend in California is going very much in the right direction based on the number of implied infections calculated by their algorithms. 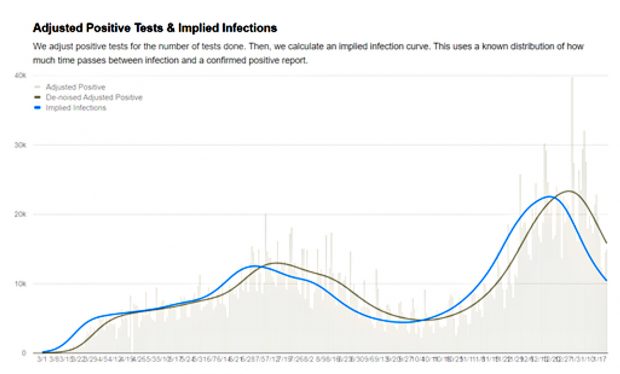 On top of the positive trends, we finally have the vaccine being distributed. Let’s set aside the fact that the distribution and administration of it is a complete and utter mess. At least it’s finally starting to happen and this should obviously be helpful in slowing the transmission… with one caveat.

Before discussing that, however, I thought I would share this that I copied from the Eisenhower Medical website FAQs about Covid.

I have written previously about my utter skepticism that we would be able to roll out the vaccines in such large quantities and administer them in an organized and effective manner because of the immense manufacturing, storage, and logistical challenges. I thought this succinctly and specifically conveys some of the challenges our medical system is facing in administering the vaccine.

Is being vaccinated different than just coming in for a flu shot?

Yes, especially with the Pfizer vaccine. This vaccine requires exacting clinical and logistical expertise to administer properly. For example, once we remove a vial from the -80° Celsius freezer, it requires defrosting, being shaken 10 times, then an additive injected, then shaken again 10 times, then a filling of syringes, and hopefully patients ready and waiting. Once the vaccine is thawed and prepared, staff have only 6 hours to administer the vaccine. The shot is short, but after vaccination, we require a patient to remain for 15 minutes for their safety with a nurse to observe and ask whether you feel light-headed or have any adverse reaction. Finally, you need to walk away with a date for your second shot, and a card, documenting your vaccination type and date.

Did Pfizer’s clinical trials really test the effectiveness of shaking it less than or more than 10 times before and after the additive was injected? What if someone only does it 9 times or ends up doing it 11? Is it that sensitive? I digress.

If we want to follow a country’s case trajectory after the widespread administration of vaccines then Israel is the best one. As the following graph shows, Israel is far ahead of the world in vaccinating its population. 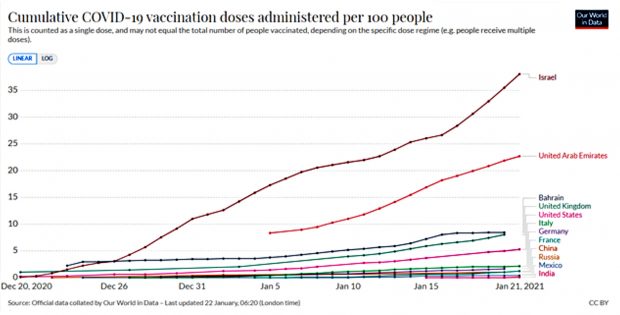 I will be paying close attention to Israel’s Covid cases to see how much the vaccine brings down the number of cases. As the following chart shows, they are already starting to drop after a second wave cresting. I would expect them to start coming down quite materially with a meaningful percentage of the population now vaccinated. 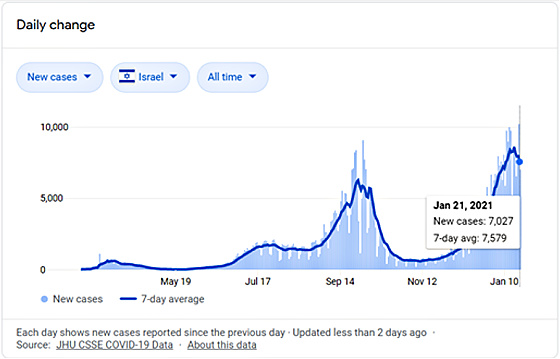 The caveat I mentioned above to these positive trends relates to the mutations in Covid that are leading to different variants of the virus. Viruses mutate all of the time. Some don’t materially change the transmissibility of the virus or its impact or how lethal it is. Every so often, however, a variant arises that does have a materially negative impact. This appears to be the case with B.1.1.7 which has hit the United Kingdom particularly hard which has led to another nationwide lockdown.

Initially, as this article excerpt conveyed, it did not appear that B.1.1.7 is a more deadly form of Covid-19 but it is much more transmissible.

Epidemiologists have concluded that B.1.1.7 is more transmissible, but there are no signs that it is more deadly. Some researchers estimate that B.1.1.7 increases the number of new cases caused by an infected individual (called the reproductive number or Rt) by between 40 and 80 percent; another preliminary study found that Rt increased by 50-74 percent.

Unfortunately, as I was writing this, the following headline emerged.

Given that it may be more lethal and is definitely more transmissible, we now face the risk that if it leads to many more cases we will end up with a larger number of hospitalizations and deaths. This is definitely the case in the U.K. In the U.S. we have some time to prepare, but not a lot.

For many countries, like the U.S. and Canada, where the number of COVID-19 cases has been precariously rising, a variant that increases transmission by 40-80 percent threatens to push us over the top. It could lead to exponential growth in cases and overwhelm already threadbare medical care. Evolutionary change takes a while, buying us maybe a few weeks to prepare.

One surprise for researchers was that B.1.1.7 bears a remarkable number of new mutations. B.1.1.7 has accumulated 30-35 changes over the past year. B.1.1.7 doesn’t mutate at a higher rate, but it appears to have undergone a bout of rapid change in the recent past. 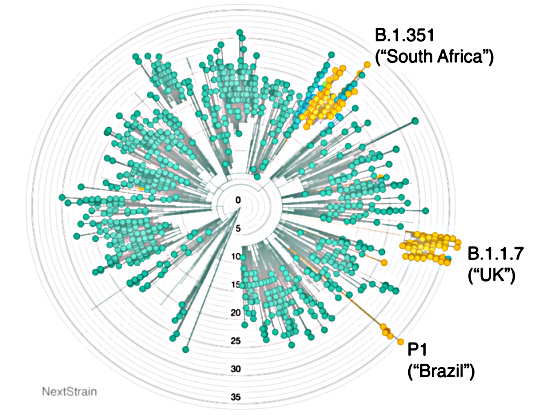 Each dot represents a SARS-CoV-2 genome, with branches connecting related viruses to their ancestors. The center represents the virus introduced into humans. The viruses furthest from the center carry more mutations. Highlighted in gold are the three new variants. (NextStrain), CC BY

So what did the researchers find so far?

This observation indicates that 501Y.V2 may escape the neutralizing antibody response elicited by prior natural infection. It raises a concern of potentially reduced protection against re-infection and by vaccines designed to target the spike protein of earlier 21 SARS-CoV-2 variants.

This is problematic (to say the least) because it raises the possibility that people who have had Covid could get it again as well as those vaccinated against the primary strain may not have sufficient immunities to fight this variant. This could put herd immunity further down the road and lead to more infections, hospitalizations, and deaths. This is why getting large numbers of people vaccinated is very important because the less it spreads, the less chance it has of replicating and mutating.

We’re at a challenging crossroads. We are bending the curve against Covid but now in a race against time to generate enough herd immunity to beat back attacks from new virus variants. It’s important to stay vigilant.