A significant percentage of CWS’ property insurance has been placed in London since 2010. After having CWS representatives visit London to meet our incumbent carriers and prospective ones over the past nine years, I thought it was time to join our head of Risk Management, CFO, and our U.S. and London brokers and be part of this year’s meetings. It was a very enlightening trip, especially in the wake of what the insurance industry is calling HIM for the super cats (catastrophes) of Harvey, Irma, and Maria. Add to that the devastating losses from the fires in northern California and the insurance industry are facing estimated losses in excess of $100 billion. We had 11 meetings over one and one-half days with only one of them outside of our broker’s office. Fortunately, it had a terrific view of London as the following picture shows. 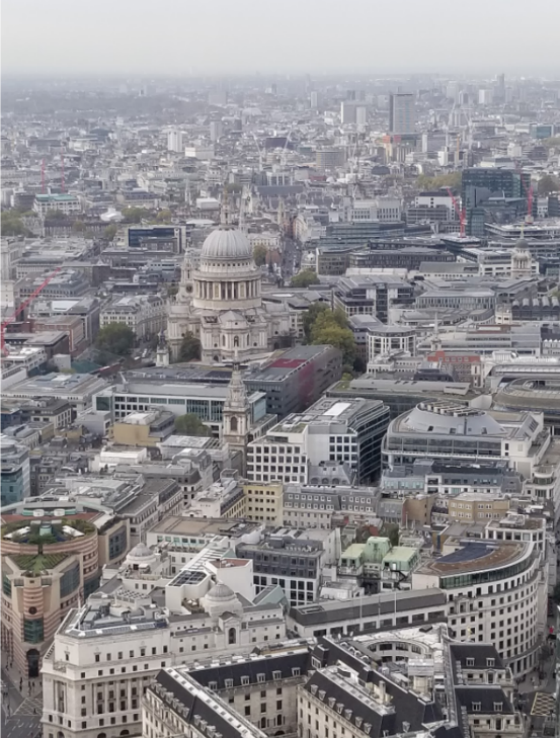 In addition to the spectacular views of London, I also had the privilege of taking a quick tour of Lloyd’s of London. I heard so much about the various Lloyd’s syndicates during our meetings but it wasn’t until seeing Lloyd’s itself and the trading floor that I had a better understanding of how it works.

I’m standing in front of the bell that was rescued from one of the ships Lloyd’s insured hundreds of years ago that went down. It is the prime spot in all of Lloyd’s and the firms with boxes closest to the bell pay the highest rent. 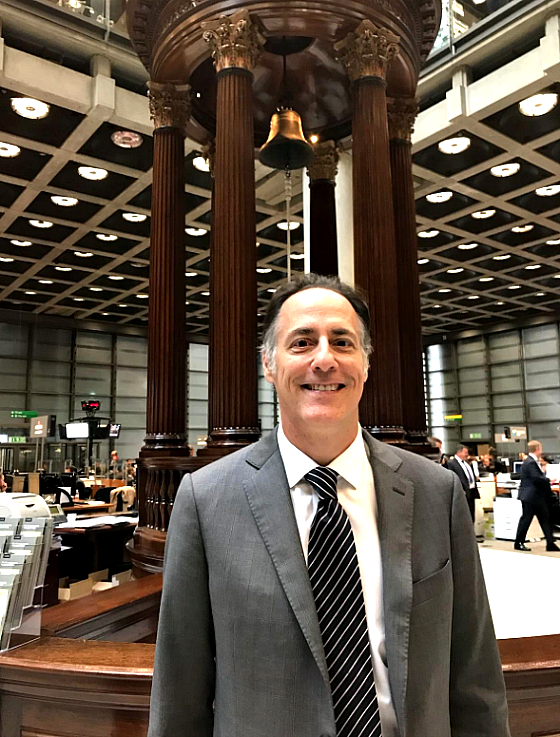 Here are a couple of the syndicates in their boxes in action. 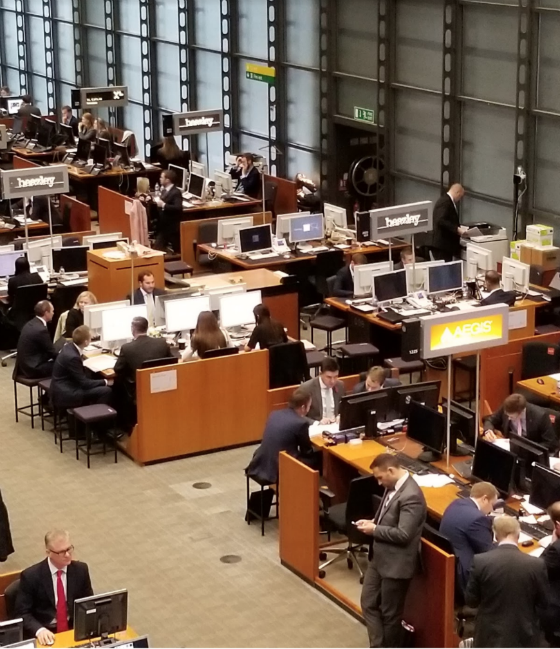 Here is a picture of a beautiful room in Lloyd’s with a portrait of Winston Churchill. Churchill is one of my heroes so I couldn’t resist taking a picture with him. 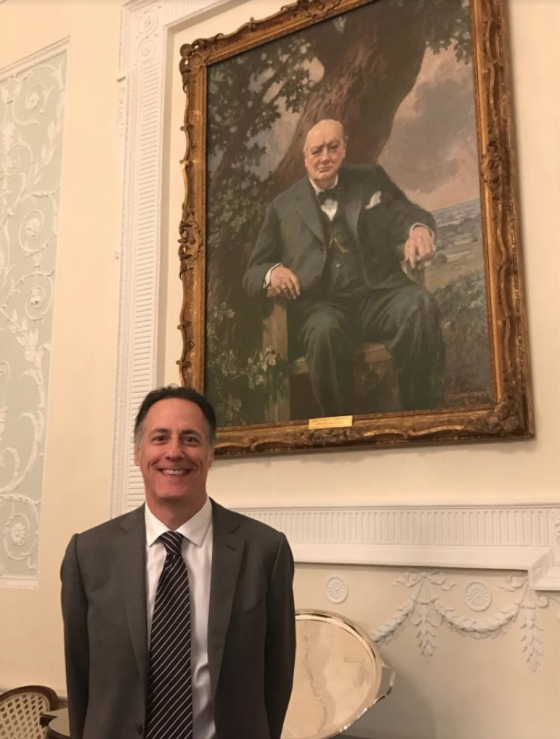 During the trip, I had lunch with a friend I grew up with at his house for a wonderful three hour Sunday brunch. He is not very finance-centric and a pretty low key guy. When I asked him about his neighbors he casually mentioned that the one next door worked at the Bank of England. My ears perked up and mind started wandering and I was thinking myself there is no way it could be who I was thinking of.  I took a flyer and asked if it was Mark Carney and he said,  “Yes it was” quite matter of factly. I couldn’t believe I was within eyeshot of the head of the Bank of England. It was as if I was next door to Janet Yellen. I really wanted to go over there and knock on his door and discuss Libor but my friend and his wife discouraged me from doing so saying that is not the proper thing to do in England. I did take a picture with Carney’s house in the background but I don’t feel right posting it here.

It was quite a trip for being close to financial titans as I also happened to see the head of Goldman Sachs, Lloyd Blankfein, in the lobby of the hotel we were staying at. I was quite proud of that and proved it was him to the people I was traveling with by Googling his picture. They agreed it was him. I also verified he was in London by Googling news about him.

Things got interesting from a security standpoint at the hotel as the 5th floor became inaccessible a couple of days into our stay. Due to some very impressive detective work by my wife, she figured out that Israeli Prime Minister Benjamin Netanyahu was going to be staying at our hotel. He was coming to town to celebrate with U.K. Prime Minister Theresa May the 100th anniversary of the signing of the Balfour Declaration which was the first official step to put the wheels in motion for the founding of the state of Israel which ended up happening in May 1948.

I will focus next week’s blog about what I learned in London after meeting with the various insurance underwriters. It was very eye-opening. The industry has been in a lot of pain, much of it self-inflicted, and 2018 will most likely be the year in which leverage will shift significantly back to insurers in terms of pricing power and requiring higher deductibles from property owners. CWS is, unfortunately, no exception as we have been hit hard over the last few years by hail damage destroying a number of our roofs, one fire, and a big loss related to Hurricane Harvey in Houston. Stay tuned for that exciting report.

From London, it was off to Prague with my wife. Many people recommended Prague to us so we decided to go for it and we are very glad we did. What a charming city. It is beautiful and it has a relaxed vibe, especially after being in the hustle and bustle of London. I have also been interested in visiting Prague as I did an honors thesis at UCLA about the Prague Spring of 1968 and the Hungarian Revolution in 1956. Both were uprisings against the Soviet-controlled puppet governments of Czechoslovakia and Hungary. It was nice to see where some of the key events took place as well as the Velvet Revolution that overthrew the communist government in 1989-90.

Our tour guide was excellent and she was at the perfect age of 33 to show the dichotomy in attitude and outlook between those who came of age after the Velvet Revolution and those before. She said the older generation is pessimistic and negative and attributed this to them always believing that people everywhere else were better off than they were in Czechoslovakia. That is because under communism they could not travel freely and lacked the freedom to pursue their interests. Today she says the younger generation has much more freedom and has seen more of the world and realize that everywhere there are problems and they have a good life at home. Sure, it may not have the wealth and glamour and sophistication of other places, but they don’t mind that as they love their culture and history and know they can visit those places if they so desire. They are realistic and optimistic at the same time. My kind of people. It’s also great that virtually everyone under 35 speaks English which makes it so easy to navigate through the city, restaurants, and bars.

We had the opportunity to visit the Strahov Library within the Strahov Monastery which was a real treat. The monastery was founded in 1140 and we had the opportunity to take a rare, private tour of the library which has over 320,000 ancient books, the oldest of which came from the 9th century. The unique thing about this monastery was how open-minded it was. It allowed books from all schools of thoughts based on the belief that there was no monopoly on the truth and dogma was very dangerous. People should be free to pursue the truth on their own accord and the best ideas should win out at the end of the day.

This is my wife and tour guide in one of the two rooms in the library. 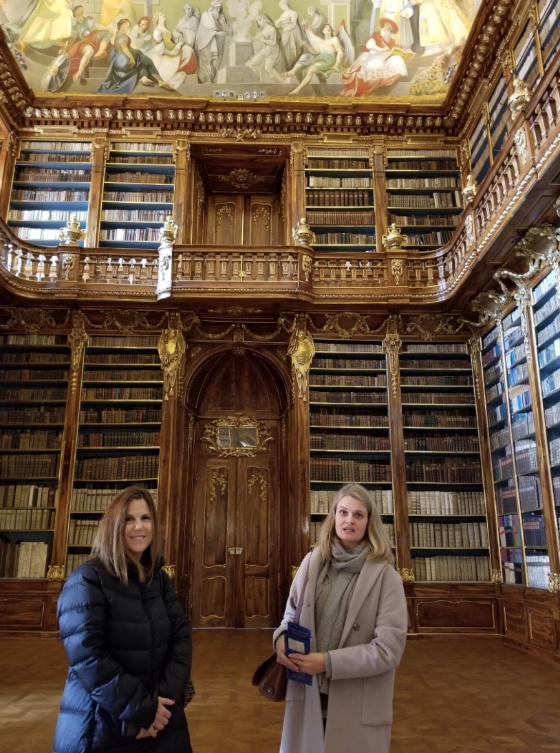 The open-mindedness is reflected in the beautiful scenes painted on the ceiling that was completed in the late 18th century. This is one of my favorites showing Socrates just before drinking hemlock and willingly accepting death rather than compromising his values. 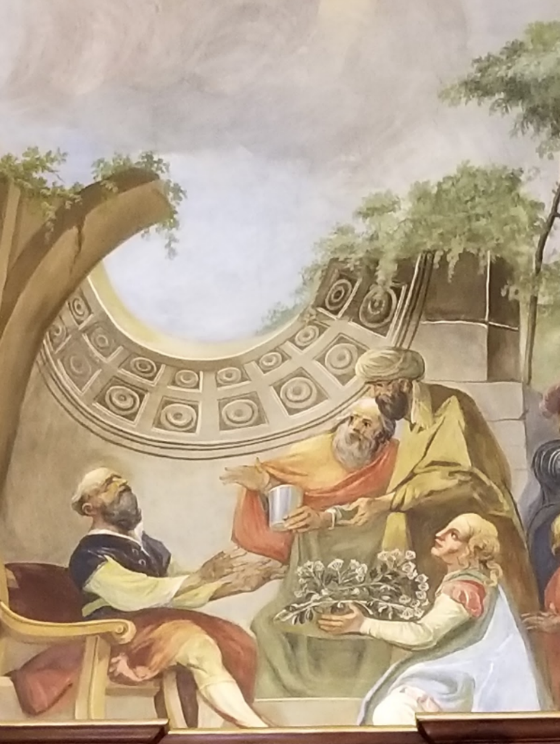 Here is Moses receiving the Ten Commandments and to the left the Tree of Knowledge of Good and Evil. These two depictions represent some of the most powerful aspects of what it means to be human: Values, free will, and meaning. 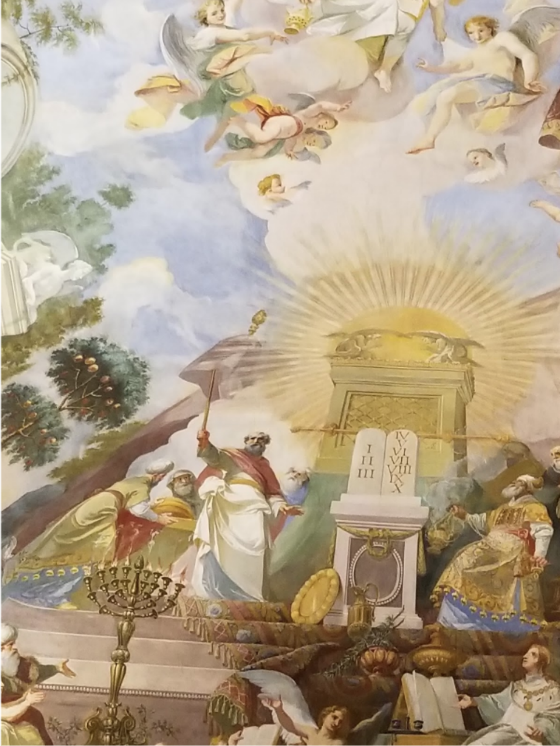 Here is a more expansive view of the room and ceiling. 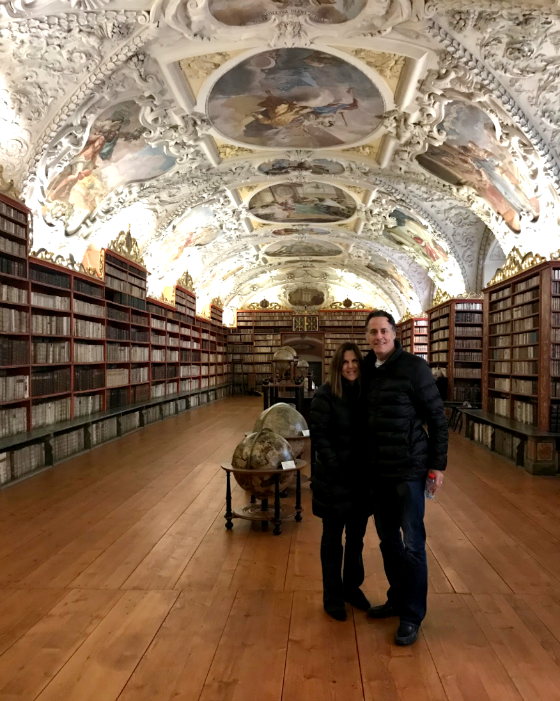 Right outside the library, I was happy to see the opportunity to tap into an anti-depressant. And what was that? Beer! Apparently, the hops in beer can help one improve his or her mood. 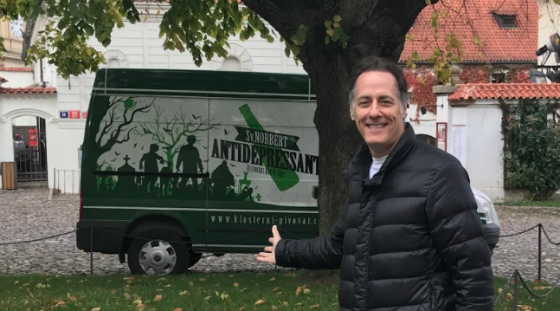 My wife and I decided to test out the theory and we were happy with the results. 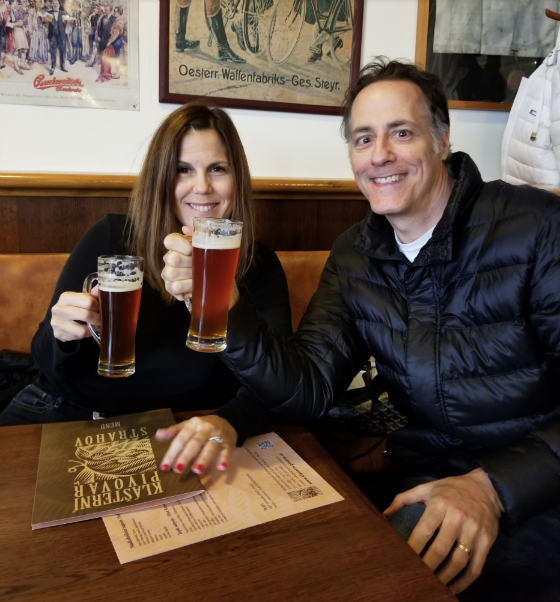 This is the square outside of the Prague Castle and Presidential Palace. 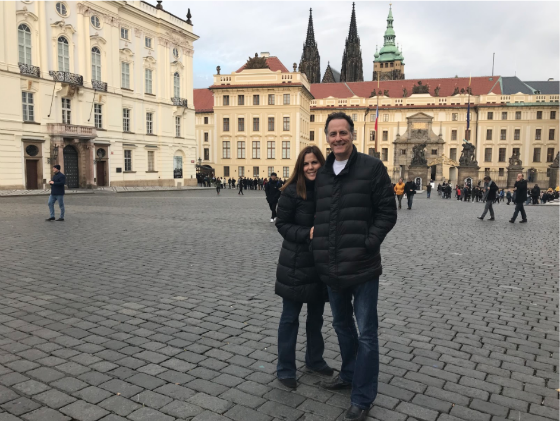 Here is the Presidential Palace within the Prague Castle gates. This is where the president works and lives and many government offices are in this area as well. 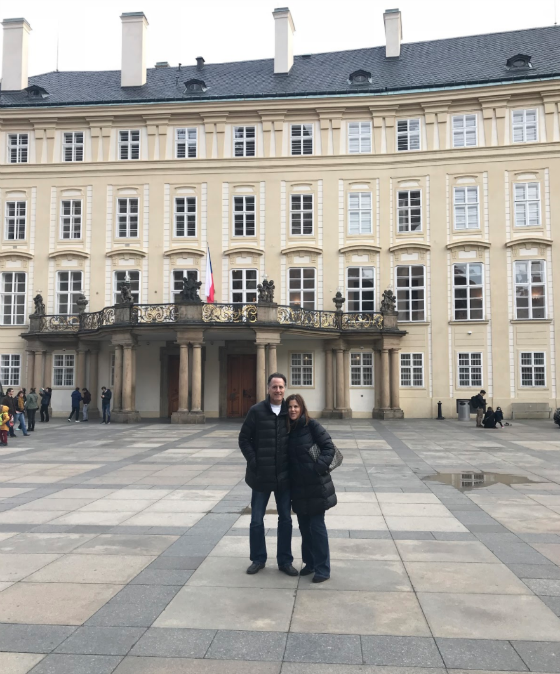 Here is the cathedral inside the Prague Castle in which the oldest section was built in 1344. 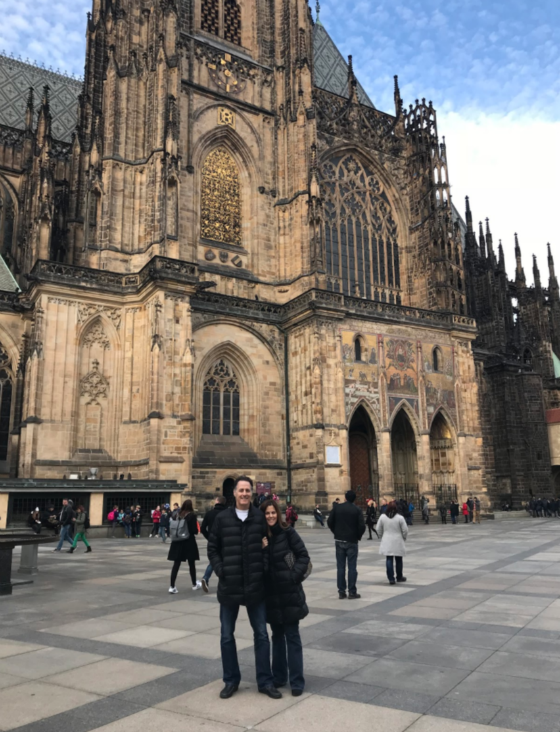 This is the home of Franz Kafka, one of the most famous Czech writers. I had read The Metamorphosis and The Trial awhile back and decided to read a couple of his short stories prior to coming to Prague. I must say he is a real challenge to absorb. He almost has to be felt as much as processed intellectually. Our guide was very knowledgeable about Kafka and it was nice hearing what she had to say about him. He is definitely an acquired taste and not for everybody. My daughter happens to love him. One can learn a lot about a person just from knowing if they are big fans of Kafka. 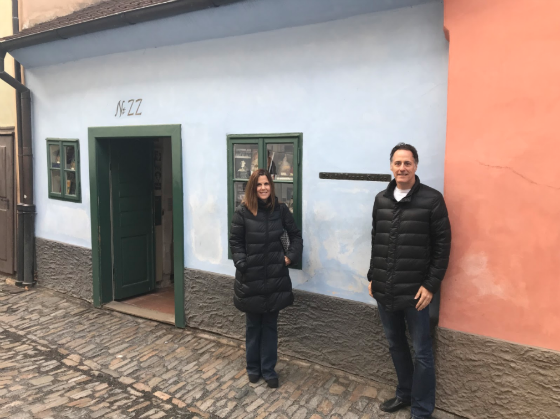 Here are some scenic views of Prague in an attempt to convey the beauty, charm, and wonderful architecture. They really do not do it justice though. 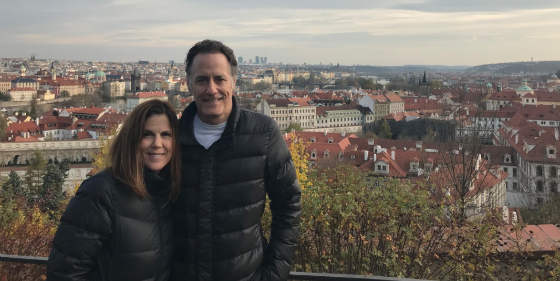 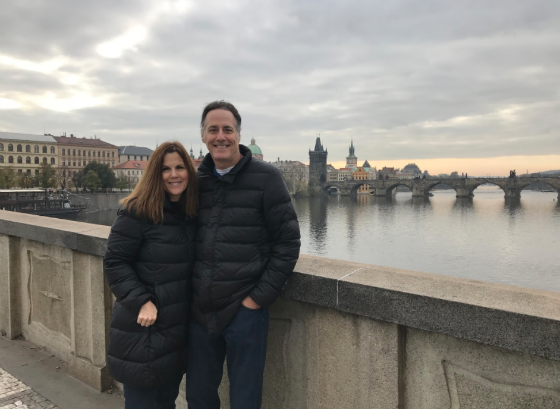 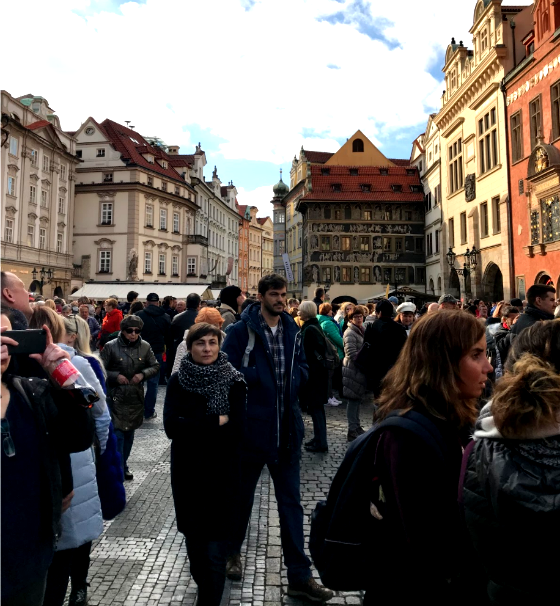 I always enjoy people watching when I’m traveling in foreign countries and capturing them doing everyday things. Here is a mother with her little girl on a street in Prague. I love how intently the girl is looking at her mother waiting to be fed. 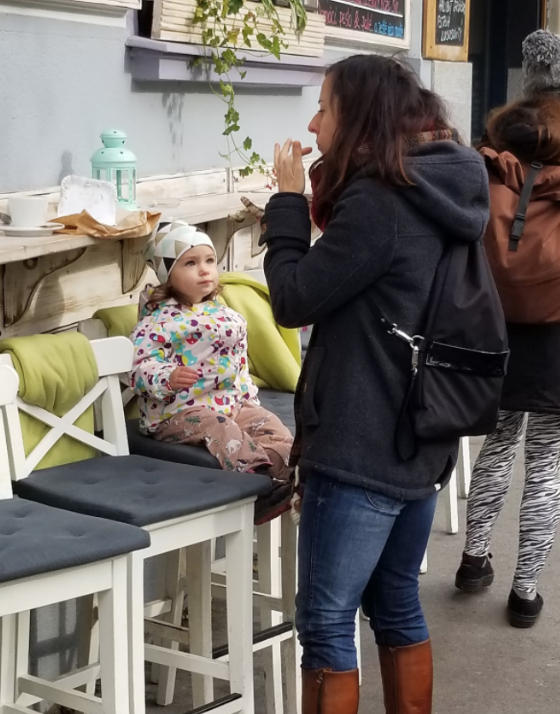 Now let’s compare how some adult men eat in Prague along with a Russian boy who sat at our table. 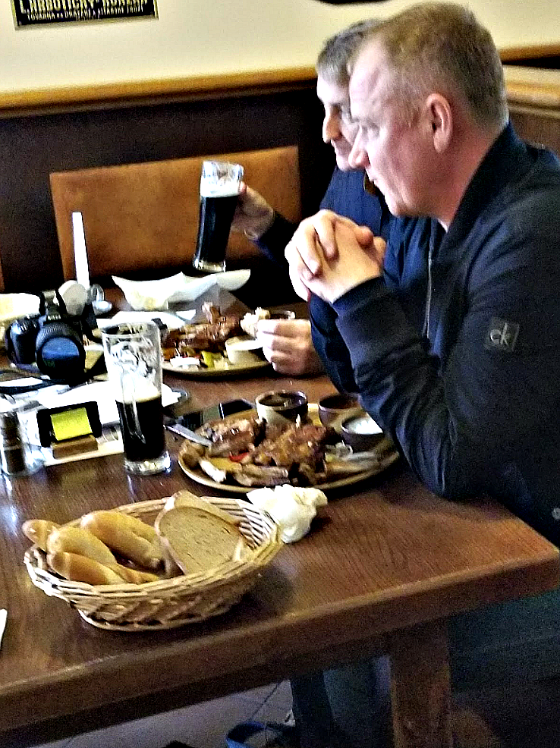 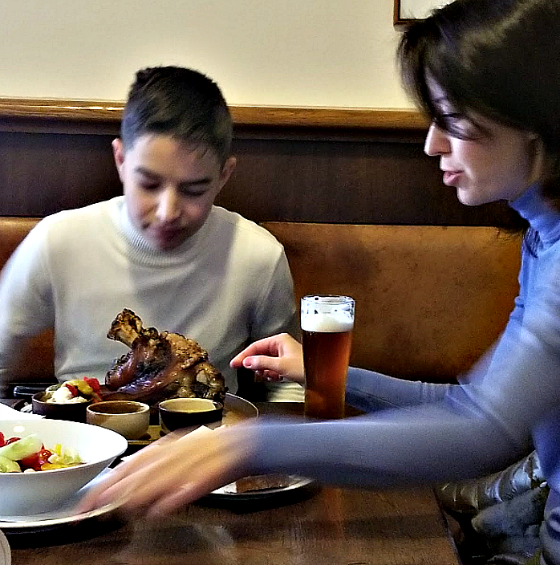 Just to show that hipsters are not just an urban, American phenomenon, like so many other trends, they have spread globally as this guy shows. He is the Prague version of the Most Interesting Man in the World. 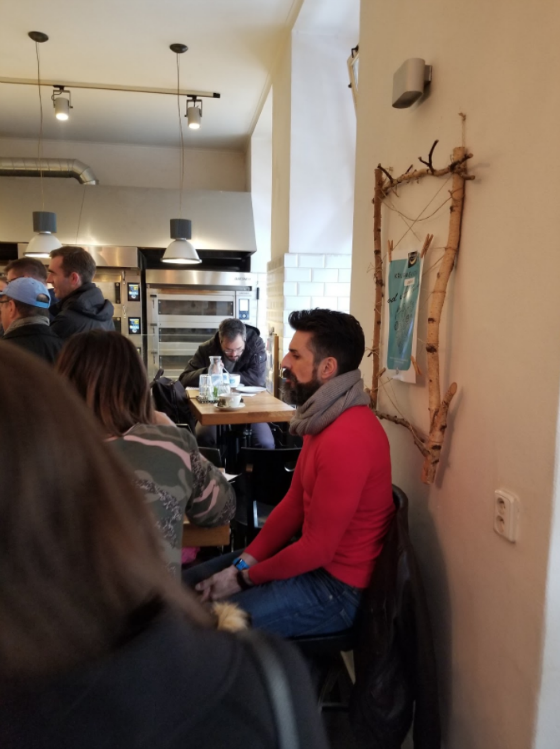 We couldn’t visit Prague and not see the impact World War II had on the Jewish population there. This picture shows a mother and son who lived where these plaques were placed in the ground. They were 40 and 9 respectively and were sent to Terezin, which we visited and was a way station primarily for Jews who were to be further shipped for their extermination in one of the many concentration camps, particularly Auschwitz. As an aside, the town of Terezin had a population of approximately 7,000 prior to the war and reached a maximum of 58,000 when Hitler took it over and started using it to house the Jewish population there. The conditions were inhumane and led to the death of many. Sadly, the odds of surviving were very low as those who made it through Terezin had very little chance of making it out of the camps alive.

These two died in Auschwitz. 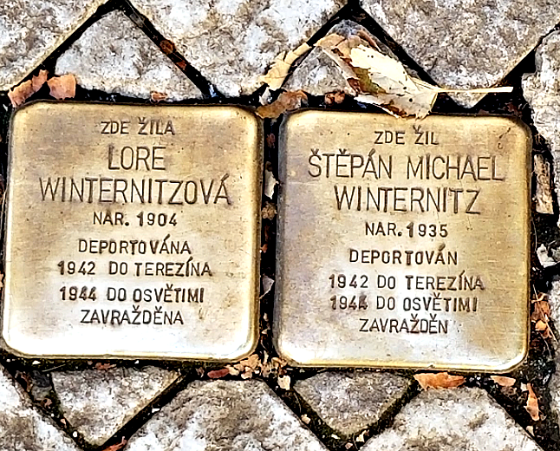 Here is one wall of many at a synagogue in the Jewish Quarter of Prague listing all of the names of the Jews from Czechoslovakia who were killed in the Holocaust. 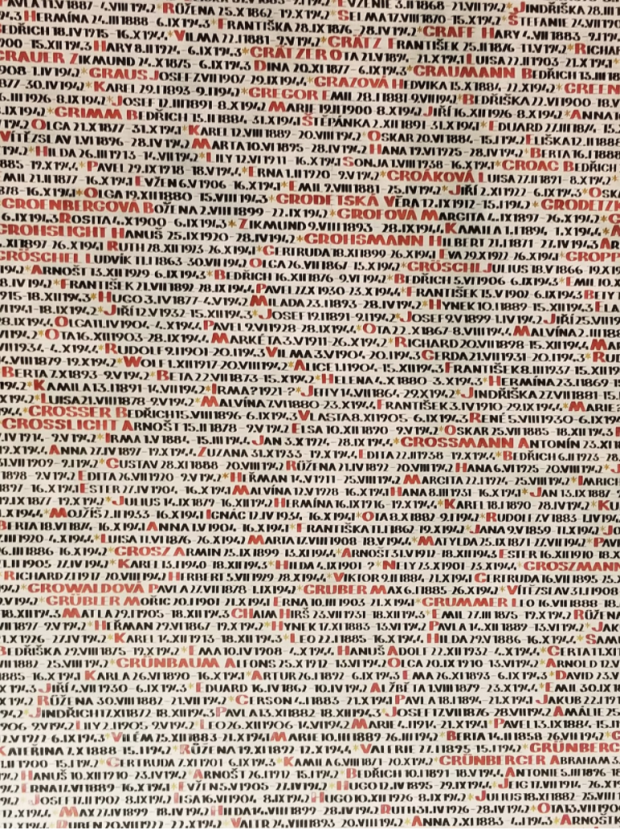 Finally, I will leave you with a heart-wrenching poem written by a 14-year-old boy who was killed at Auschwitz who was first shipped to Terizen. 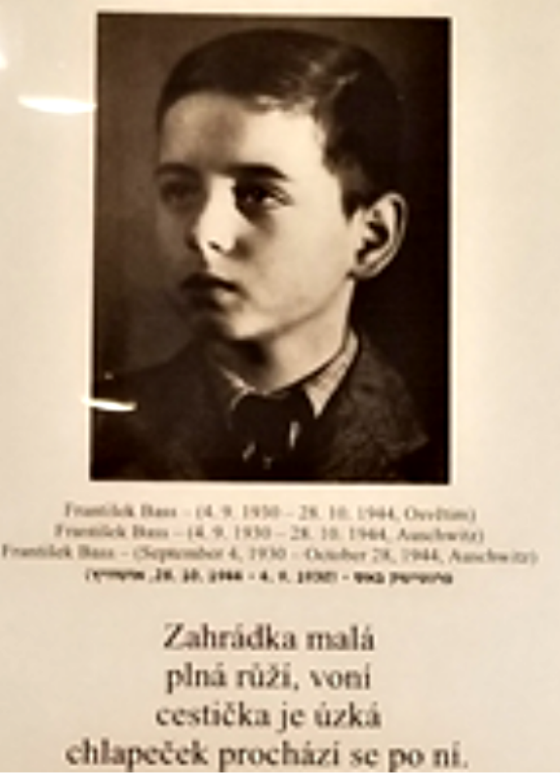 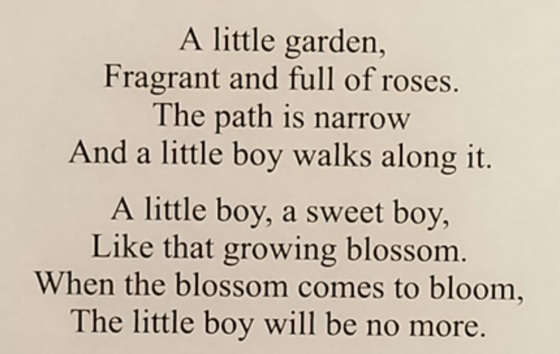