The Enemy of My Enemy Is my Friend 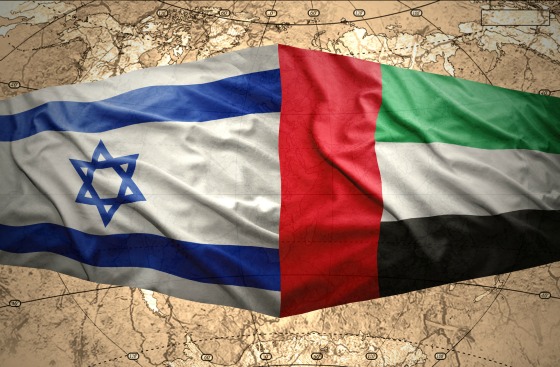 Last week I discussed the horrific explosion in Beirut. This week I’m staying in the Middle East and will focus on the big news that Israel and the United Arab Emirates have agreed to establish formal diplomatic relations. And while there were many indications over the last couple of years that the two countries were not only starting to cooperate but developing ever closer relations, this is still a very big deal. Israel only has diplomatic relations with two Arab countries, Egypt and Jordan. The peace treaty with Jordan was signed in 1994, so it’s been 26 years since Israel has broken the ice with an Arab country.

This is definitely a case of the enemy of my enemy being my friend. Like many countries, but especially Sunni Arab states in the Gulf, the U.A.E. is very fearful of Iran. But no one should have more concern about Iran than Israel as the former has threatened to wipe the latter off of the map. And for a country whose rebirth came in the wake of Hitler’s maniacal attempt to exterminate the Jewish race, and was someone who turned his words from Mein Kampf into the action of liquidating six million Jews in concentration camps, Israel takes the words of its enemies seriously and will do whatever is necessary to counter all existential threats. The Gulf states know this about Israel, they respect what it has done to counter Iran in Syria, Iraq, Gaza, and even in rare instances Lebanon to go after precision missiles of Hezbollah, and now perhaps in Iran as well with the recent spate of mysterious explosions.

Shakespeare wrote that “When clouds appear wise men put on their cloaks.”Click To Tweet

Shakespeare wrote that “When clouds appear wise men put on their cloaks.” The Gulf states have come to the practical conclusion that wrapping themselves in the cloak of the Palestinian cause will do nothing to protect them from the threat of Iran and its proxies. Israel, on the other hand, can offer them so much more. Yes, they will continue to pay lip service to the Palestinian cause, but what the United Arab Emirates. did was a game-changer, and quite brilliant in some ways I may add.

Although the Middle East peace plan put forward by the Saudi king in 2002 said that relations with Israel wouldn’t be normalized until the issue of a Palestinian state was resolved, the U.A.E. can say that they did not ignore the Palestinian cause by making it a condition to normalizing relations with Israel that Israel agrees to suspend its plans to annex of parts of the West Bank.

All Roads Lead to Israel

The United Arab Emirates is facing a potentially mortal enemy only 100 miles away and it does not have the manpower and military might to defend itself on its own. And with the Saudis performing miserably in Yemen, they can’t be counted on as well. And when you add in the United States trying to appease Iran under Obama with the nuclear accord and not acting on the use of chemical weapons red line in Syria, along with Trump’s desire to pull back from the Middle East, the Gulf states could see which way the wind was blowing and they needed to make some radical adjustments. All roads started leading to Israel as it has shown how remarkably advanced it is in its military acumen, intelligence gathering, and cyber capability, such that it can offer tremendous synergies to help contain Iran, especially in an environment in which the United States wants to pull back from the Middle East. Throw into the mix Israel’s extraordinary high tech business sector and Dubai’s very pro-business environment and Abu Dhabi’s tremendous wealth, the prospects are very exciting in terms of investment, technology sharing, and tourism.

My Visit to the United Arab Emirates

Prior to my trip to Zambia in March to participate in the opening of the Roneet Carmell Agricultural Training Center in Zambia, I stopped in the U.A.E. for a couple of days and visited Dubai and Abu Dhabi. As an aside, I ended the trip in Israel so I’ll leave it up to you to determine if I had any involvement and influence in last week’s announcement that the two countries were normalizing relations.

I wrote about my experience with the opening of the training center and then my visit to Victoria Falls. I have also written about visits I’ve made to Israel as well. What I haven’t discussed yet, however, is my quick visit to the U.A.E. I thought it would be a good opportunity to share some pictures from my visit there given the monumental events from last week. I’m glad I went and had the experience and is something I recommend for others as well. It seems like ages ago given the shelter in place environment we’ve been living in during the COVID age.

I always like studying maps, especially when I’m flying over places where I haven’t been. This is a picture I took from the plane while flying over Iraq which I thought was pretty cool. 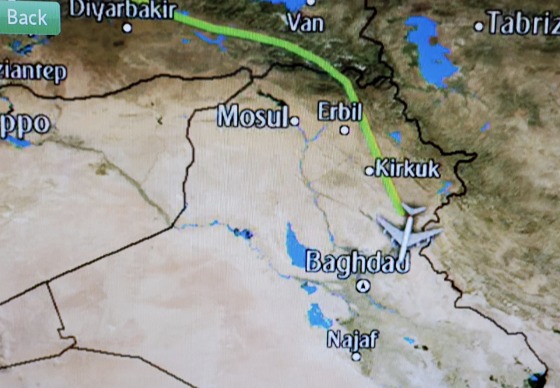 Of course, Dubai is known for its real estate and huge towers so I had to take a picture showing a vantage point of part of the skyline. 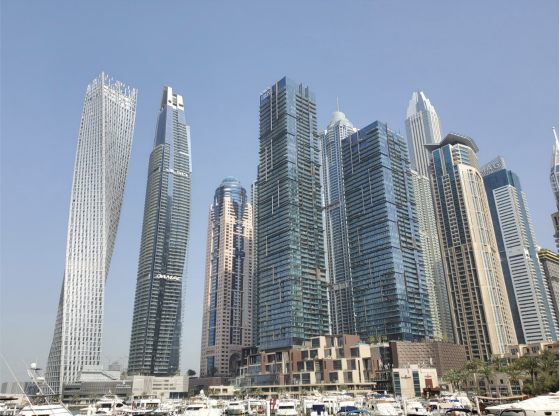 In 2018 the country celebrated what would have been the 100th birthday of the first President of the United Arab Emirates I couldn’t pass up the opportunity to be photographed with someone so important. 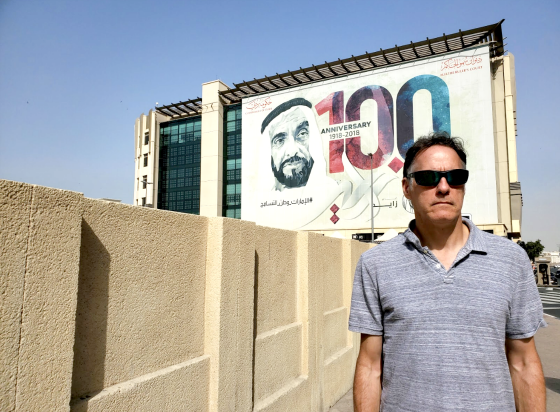 Being so close to Iran, the spice markets in Dubai have access to some of the best saffron in the world, as well as many other spices. This is one of the stores I frequented and made some purchases. 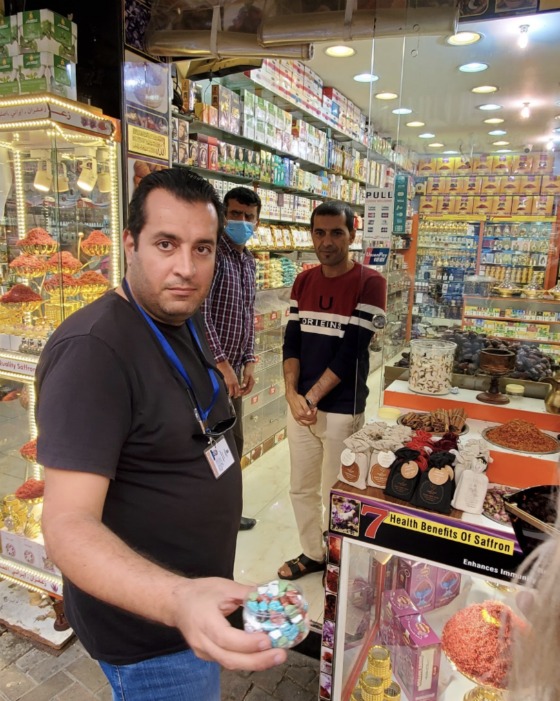 This was when the coronavirus was starting to gain global traction. No issue with this person wearing a mask. When I smelled one of the spices, the aroma was so strong that I said it could cure the coronavirus. That got a big laugh out of this merchant. 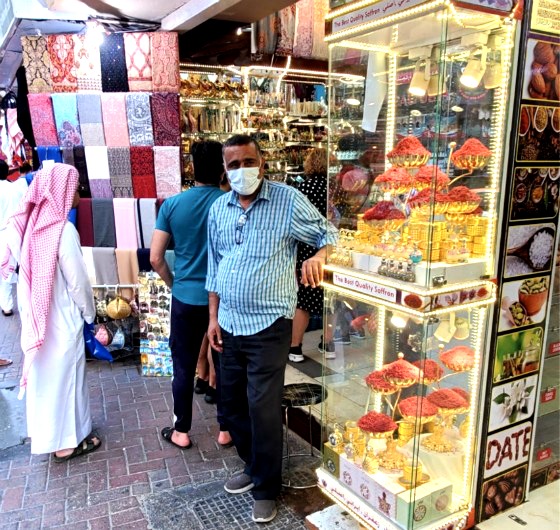 When in Dubai, do as the Dubains do. 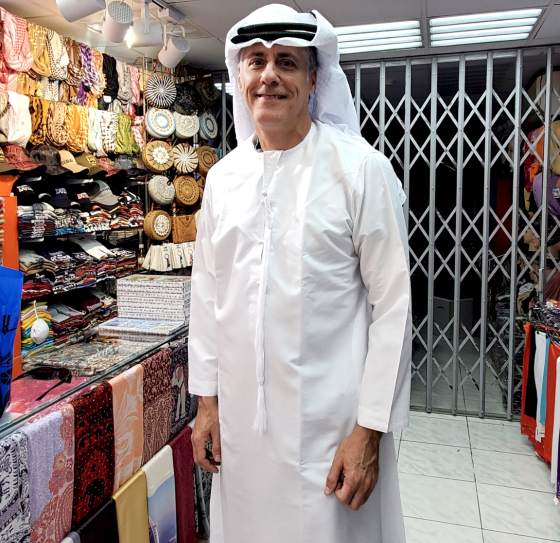 Dubai has a big gold trade and this is the largest gold ring in the world. It is quite an impressive sight. 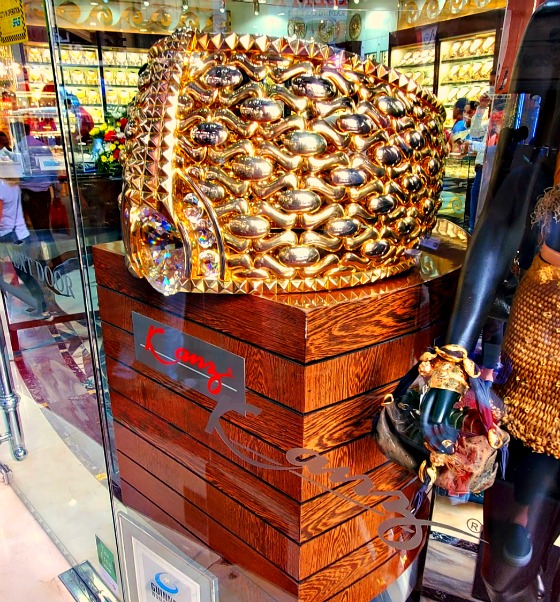 It was then off to Abu Dhabi for a guided tour. This was the itinerary and cost for the day. 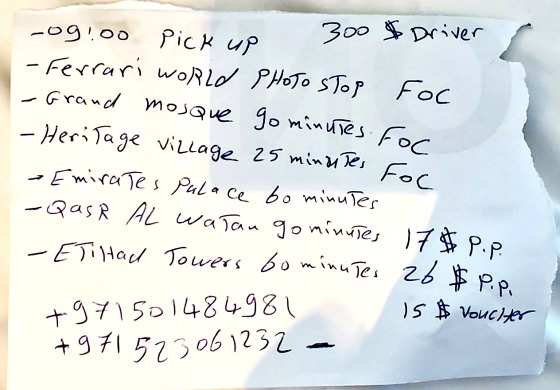 This is the headquarters of one of the U.A.E’s biggest developers. A very cool building.

The next few pictures are from the Grand Mosque, which is an extraordinary sight to behold and a must-see if one is to visit Abu Dhabi. 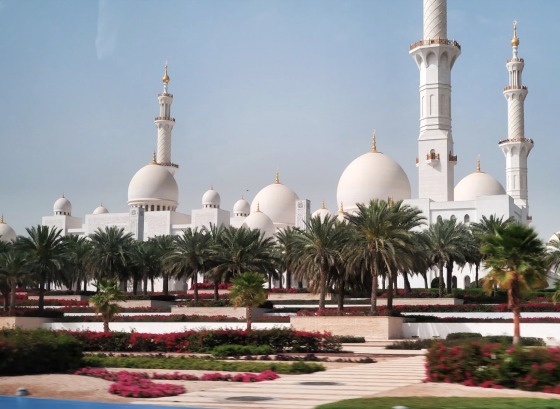 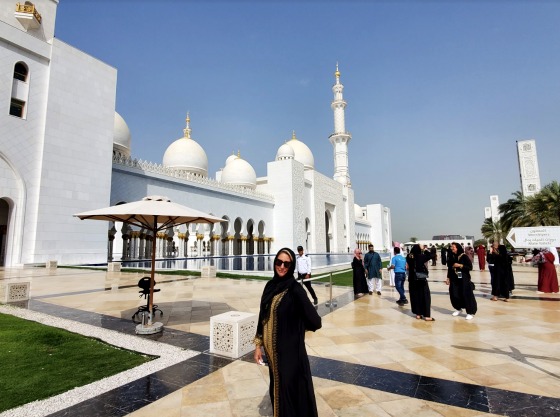 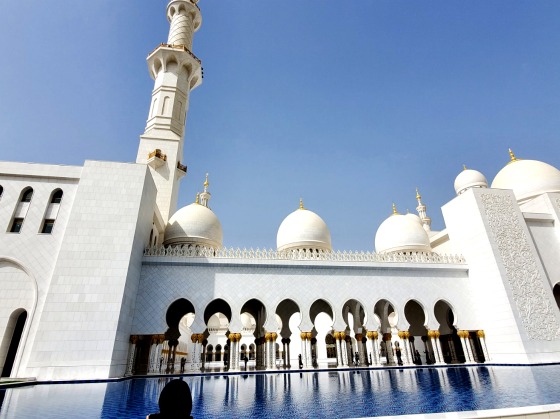 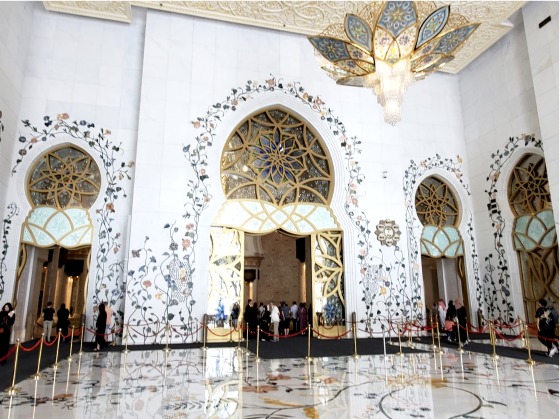 I don’t think my photos did justice to the grand scale and opulence of the mosque but hopefully, it gives you a sense of it.

This is from a restaurant in one of the most opulent hotels in the world in Abu Dhabi and shows gold crystals topping the coffee in a beautiful design. It’s inside the Emirates Palace. 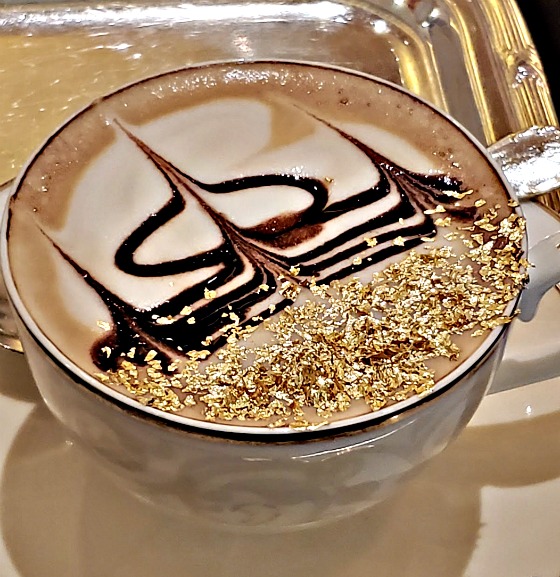 Having a license plate in the U.A.E. with just one or two digits is incredibly valuable and people literally pay $1 million or more to have these plates. I had my travel partner Heather subtly model in front of this beautiful car with one of the more coveted license plates. 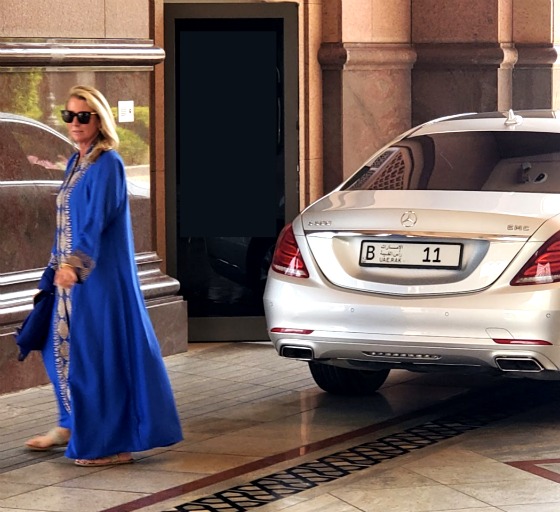 Here are a couple of pictures outside of the hotel. 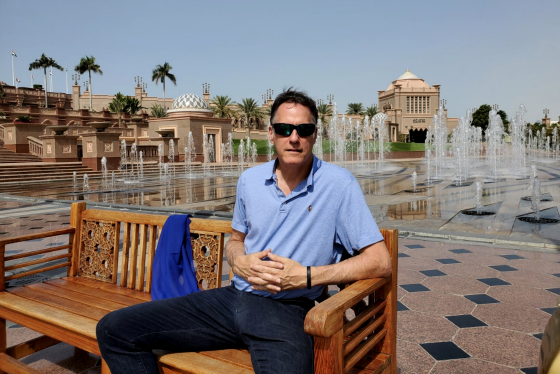 Here is a shot leading to the entrance of the Emirates Palace.

Here is an aerial view of the hotel from the Etihad Towers. This shows how large the hotel is and how expansive the grounds are. 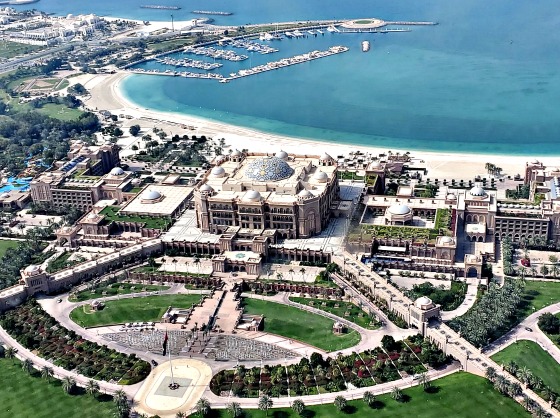 We had to visit a shopping mall that this part of the world is so well known for given its tremendous wealth and buying power. It was interesting to see how it really started filling up after 3:00 p.m. when the kids were out of school and the heat was stifling. People would come to the mall to escape the heat and socialize.

This was touching to see, especially after having traveled from the area where Kobe Bryant lived and was so beloved. 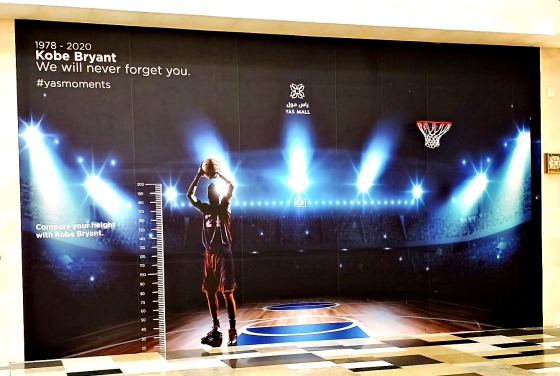 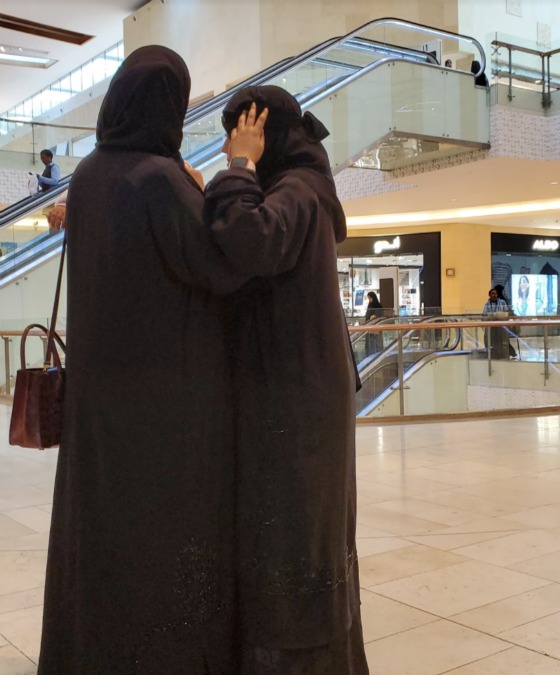 Here is a father with his daughter waiting while his wife/wives? went shopping. Men are allowed to have up to four wives and we saw him talking to two women. We weren’t sure if both were his wives or only one. He gave them his credit card and he waited with his daughter while they did their patriotic duty to help the economy. 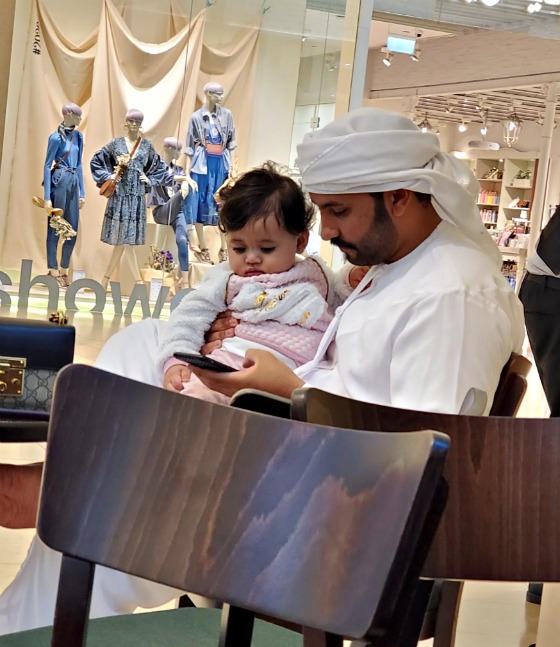 I will leave you with this uplifting thought that seems apropos given the extraordinary events last week that took place between the U.A.E. and Israel.

The cloaks are now being put on in public by the Gulf states and they now know that their survival and prosperity are now much more enhanced by being aligned with Israel against Iran than not.

It will be very interesting to see what transpires over the next couple of years in terms of more public cooperation between Israel and the Arab world. 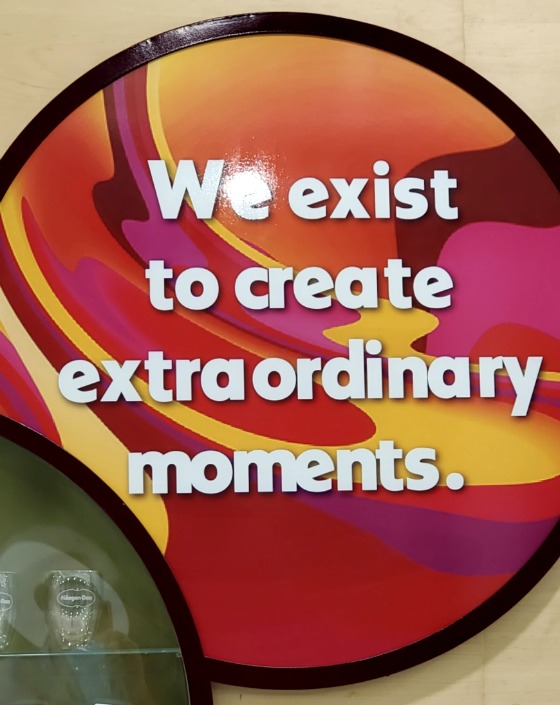 2 comments on “The Enemy of My Enemy Is my Friend”