Blast to the Future 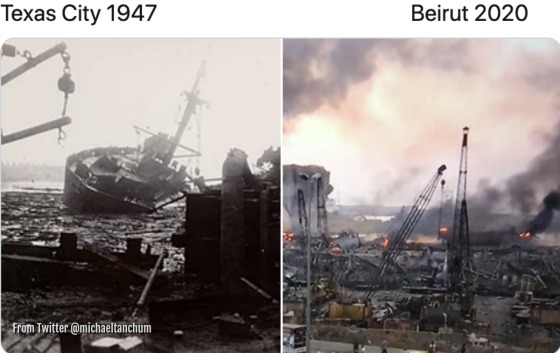 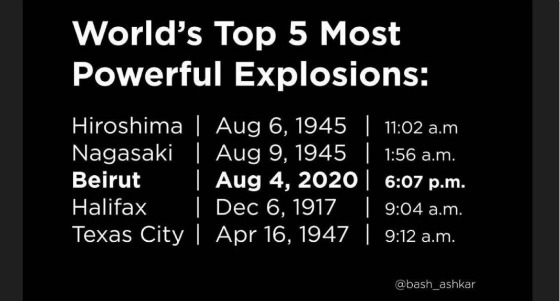 What happened in Beirut was absolutely horrific. As the graphic above shows, it is considered to be the most powerful non-nuclear explosion in history. To put the power of the blast in context, the Oklahoma City bombers used two tons of ammonium nitrate while Beirut’s ignited approximately 2,750 tons!

For many years I have lived in the vicinity of Disneyland such that I often could hear the nightly 9:30 fireworks from my home. There were times when I was at the home of other family members who lived much closer to the park and the fireworks were so much louder than I would often say that “it sounds like Beirut.” That was many years ago and, up until last week, Beirut in terms of bombings has been as silent as Disneyland since the park has been closed due to COVID-19 restrictions. The one vicious exception to this was the assassination of former Prime Minister Rafic Hariri in 2005 which, ironically or coincidentally, a verdict was going to be rendered against four Hezbollah operatives by a United Nations-backed court in the Netherlands on August 7th. The decision was delayed due to the events on the ground in Beirut. Perhaps that was one of the objectives of the explosion if it turned out not to be an accident.

Lebanon went through a terrible civil war that took place between 1975 and 1990 and during this time there were countless bombings that would rock the city. And while Lebanon has been careening towards financial collapse in the wake of terrible corruption, sectarian tensions, and painful U.S. sanctions against Hezbollah and its sponsor Iran, it has been spared the terrible violence of the past even with an escalation of social tensions expressed through more and more public protests.

This blast, however, was like nothing Lebanon has ever experienced.

I follow Middle East events very closely so I hungrily scoured Twitter for any nuggets of information that might paint a picture of whether this was an accident or something planned. Many fingers have been pointed to Israel because of the tensions that have been heating up with Hezbollah and they’re fierce commitment to not letting Hezbollah produce precision-guided missiles or procure powerful weapons and systems that could harm Israel. Interestingly, however, both Israel and Hezbollah have denied Israel’s involvement in the event.

The Lebanese Prime Minister has said that the ammonium nitrate has been stored there since 2014 after a ship owned by a Russian oligarch was not able to complete its journey to Mozambique because of the condition of the ship and due to the fact that he hadn’t been paying the crew and there was a mutiny. As a result, Lebanon impounded the ship and its cargo, which happened to be a huge quantity of ammonium nitrate. The port authority supposedly petitioned the Lebanese courts to get rid of the dangerous material over the years but never got a response. Another school of thought is that this was controlled by Hezbollah and was ultimately to be used against Israel. In fact, Hassan Nasrallah, the head of Hezbollah, discussed causing a nuclear-type explosion in Haifa where ammonium nitrate is stored.

And then there is this revelation.

Here is an excerpt from the article.

This could lead one to believe that Israel knew about the stockpile in Beirut and determined that it caused an existential threat and needed to get rid of it. I’m skeptical because of the huge risk of collateral damage to the civilian population, which obviously turned out to be the case. In any event, the purpose of this post is not to wade into the very dangerous and murky waters of Middle East geopolitics and strategy, but to acknowledge this horrific event and it adds to the list of terrible 2020 events.

Since I am always interested in looking back to see if there are similar events to learn from or just to research out of curiosity, I did learn from what happened in Beirut that something similar happened in Texas City, Texas in 1947.

While going through the Twitter feed related to the blast, I came across this tweet that I found fascinating. 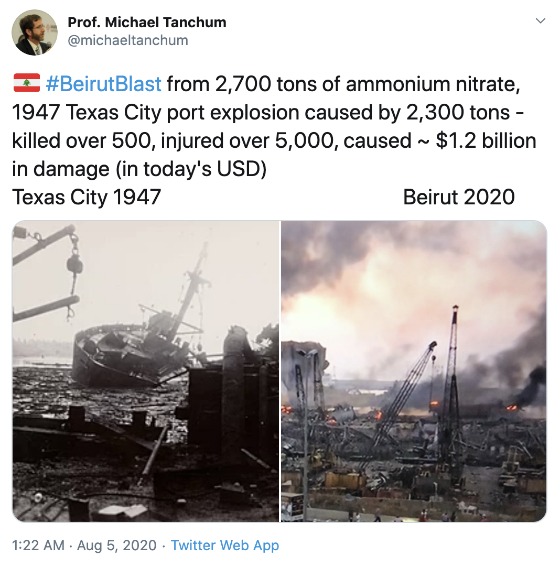 I had no idea this took place. I decided to do some research on www.newspaperarchives.com and came across the following headlines and articles. 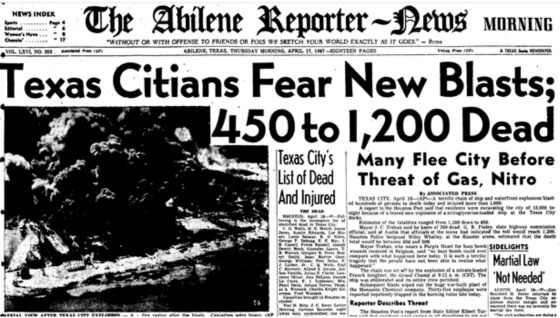 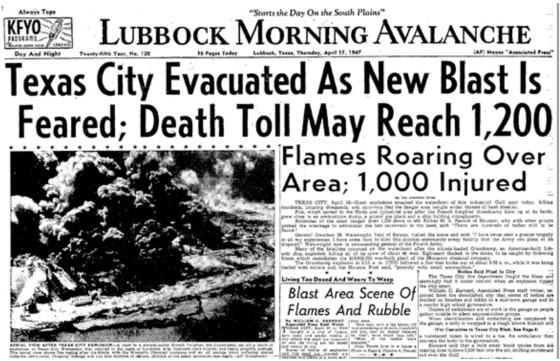 A French boat in the harbor carrying ammonium nitrate exploded and then led to the Monsanto chemical plant blowing up as well. The damage was astounding and led to a big loss of life and thousands injured. It essentially set off a chain reaction as did the first fire in Beirut which supposedly led to fireworks igniting in one warehouse and then leading to the warehouse storing the ammonium nitrate exploding and then sending a pressure wave and horrible conflagration throughout the city damaging and destroying thousands of homes. There are an estimated 250,000 people homeless and the port is destroyed.

As the graphic at the beginning shows, An even worse accident than what took place in Texas City happened in Halifax, Canada when a munitions ship collided with a relief ship in December 2017 leading to the death of over 1,600 people. It destroyed 2.5 square miles of the city, causing 5,000 injuries, and leaving an estimated 20,000 homeless.

Texas City and Halifax were horrific accidents in situations very different than Beirut. These were random, terrible accidents but these cities were not violence-prone like Beirut. Beirut’s blast is in the context of a state that was teetering on collapse prior to this and this may now push it over the edge. That is why I called this Blast to the Future. It’s of course a reference to Back to the Future. In the case of the movie, the future was able to change by Michael J. Fox’s character being able to go back to the past. It worked out for the better. In the case of Lebanon, however, I’m afraid the future may now be more like the past that the country was trying to veer away from.

From the Investing Standpoint

From an investing standpoint, it is just another indication of how complicated and dangerous the world is and will continue to be. The Middle East has so many entanglements of countries who are allies in some areas and enemies in others. There will hopefully be one big balance of power and deterrence to keep it from blowing up. I think this adds to more uncertainty and adds to the continued global demand for safe assets like Treasuries and other sovereign debt that will keep short-term, risk-free rates near 0% for many years to come, especially when layered on top of poor demographics, COVID economic carnage, and a tremendous amount of debt in the world. This will also keep a lid on long-term rates not going much past 1% for many years to come.

It’s consistent with what has been my point of view for a while now, but the situation in Lebanon and the Middle East adds another level of conviction to it.