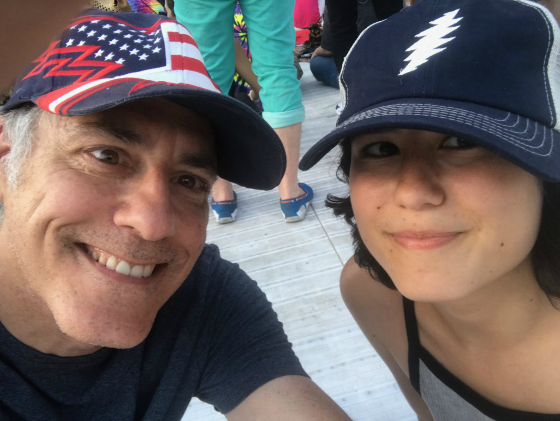 There is a line from a Grateful Dead song that says:

“See here how everything lead up to this day.”Click To Tweet

I remember on our recent long sojourn to Africa and Asia there were a number of days when we are out on excursions and it was oppressively hot. The temperatures were close to 100° and the humidity was well over 50%. It’s not like I am not used to heat because we clearly have heat waves in Southern California, but it is very rare when it is heat combined with humidity. With that being said, I do enough traveling to Texas to have experienced it as well. Nevertheless, it was still quite overbearing at times to be walking in Kuala Lumpur, Maputo, Mombasa, Dar es Salaam, etc. There would inevitably be complaints about the heat by my wife, who is particularly sensitive to it, and others with whom we were traveling. While we look pretty happy and comfortable in this picture, it only appears so because we had some temporary shade in Mozambique. 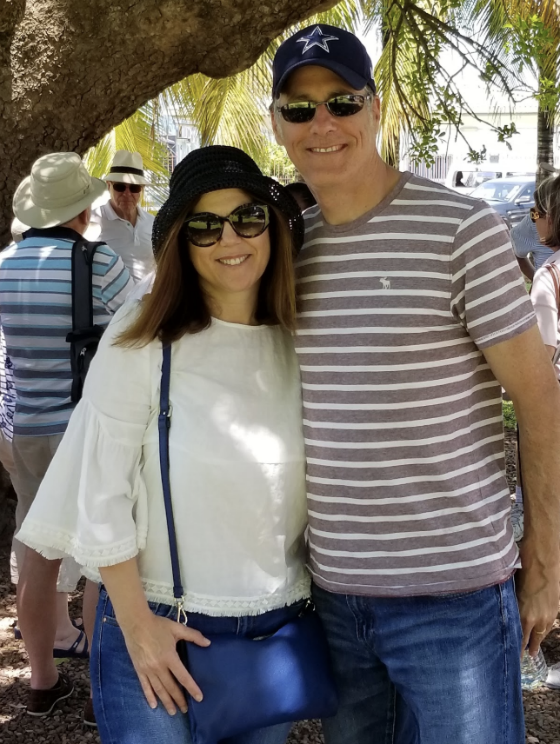 While touring through the 11 countries in Africa and Asia I took it upon myself to approach the heat and humidity as a challenge to see how much I could endure without complaint and even try to maintain a positive attitude. I also told myself that at some point in the future this experience will hopefully pay dividends, although I had no idea under what circumstances they would. It turns out that it will have done so more quickly than I was expecting. “See here how everything lead up to this day.”

Since my son was two when Jerry Garcia died and my daughter was not yet born, it was not a possibility to go to a Grateful Dead show with one of my kids. With the very successful revival of The Dead scene with Dead & Company featuring John Mayer, however, a modified version of the dream has presented itself to experience a Dead-like concert with my kids. Actually, it’s really just my daughter because my son has no interest in their music or going to the concert while my daughter is much more open-minded to it and likes some of the music.

I went ahead and bought tickets for the show at Dodger Stadium and have been increasingly more excited as it was approaching. Being the thoughtful and concerned father that I always am and wanting to be prepared, I naturally checked the weather forecast for the show. I started doing this earlier in the week and saw that a very brutal heat wave was passing through bringing temperatures north of 100 degrees to Los Angeles. The temperature when we arrived was a hot 106 degrees! 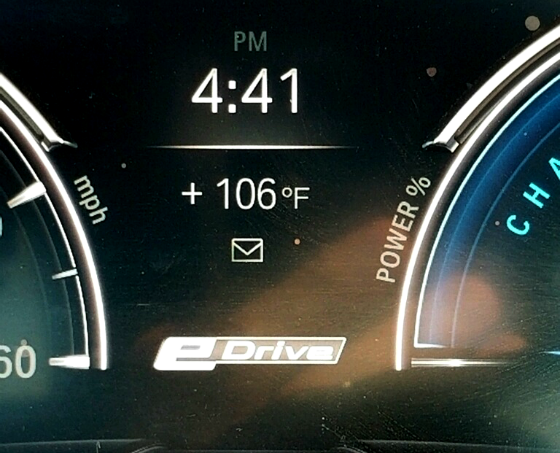 I know that it could get very uncomfortable but I don’t really have a choice but to endure it. I’m going to leverage off of that challenging experience I recently had in Africa and Asia when it was extremely hot and more much more humid than it will be at Dodger Stadium. I even made a point to hike on the 4th of July when it was fairly warm and the sun beating down to help me prepare mentally and physically for what lay ahead at the concert. I also made sure to do the treadmill and build up a sweat to do my small part to replicate some of the conditions we will be facing.

This is a good reminder that challenges, obstacles, and problems will always materialize if we live long enough, try to live a full life, and we take risks. I have found that in many aspects of life it’s important to build up muscles of resilience and courage to help give us experience so that challenging situations are not always novel and we are able to build up the physical, mental, and emotional wherewithal to do what is necessary to get through them. I like to think of courage as taking action “in spite of”. In this case it’s in spite of not liking being that hot and having to be exposed to it for a long period of time and yet I am still choosing to go and make the best of it and challenging myself to remain positive throughout and to have as much joy as I can despite the external conditions.

I have started to read some of the Collected Works of  William James, the great American psychologist and philosopher who has been extremely influential in the world of psychology, Alcoholics Anonymous, and the importance of habit formation, just to name a few of the important areas in which his work has had great influence. He wrote an essay that, interestingly, is quite applicable to one of my recent blog posts which talked about suicide.  The name of the article is “Is Life Worth Living?”. What caught my attention in terms of applicability to this blog posts is the following.

It is, indeed, a remarkable fact that sufferings and hardships do not, as a rule, abate the love of life; they seem, on the contrary, usually to give it a keener zest. The sovereign source of melancholy is repletion. Need and struggle are what excite and inspire us; our hour of triumph is what brings the void. Not the Jews of the captivity, but those of the days of Solomon’s glory are those from whom the pessimistic utterances in our Bible come. Germany, when she lay trampled beneath the hoofs of Bonaparte’s troopers, produced perhaps the most optimistic and idealistic literature that the world has seen; and not till the French ‘milliards’ were distributed after 1871 did pessimism overrun the country in the shape in which we see it there to-day.

James is saying that it’s life’s challenges and obstacles that often make us feel more alive because we have to find that reservoir of strength and courage, as well as tapping into our creativity to come out on the other side better for it. Conversely, as the Grateful Dead say,

A lack of challenge can lead to our lives atrophying which can result in us withering away. As Bob Dylan has famously said,

“He not busy being born is busy dying.”Click To Tweet

Or, for those who are more fans of Neil Young,

“It’s better to burn out than it is to fade away.”Click To Tweet

Most of us dream of winning the lottery or hitting it big so we can retire. And yet, I think if you ask most people who retired early they often regret having done so because they miss the challenges working brought as well as working with others, collaborating creatively, stretching and growing, and the overall sense of satisfaction and achievement that comes with building, growing, contributing, and achieving.

I think what most people want is knowing they have the option to retire if they so choose versus actually doing it at a young age. I think retiring early makes more sense when you are leaving and going to something versus just leaving something.

Charlie Munger has always been a proponent of taking on difficult tasks and being brutally honest about his mistakes so he can learn from them as the following quote shows:

“I like people admitting they were complete stupid horses’ asses. I know I’ll perform better if I rub my nose in my mistakes. This is a wonderful trick to learn.” Click To Tweet

I would say he falls into the camp of “doing worst first”. Focus on hard tasks to build up one’s strength, confidence, and focus and by having done so one will be amazed at the positive compounding effects this can have on one’s life. Don’t shy away from what’s difficult if you want to grow and succeed and when you inevitably make mistakes and fail, evaluate your contribution to the disappointing outcomes with brutal honesty.

I will leave you with one last quote from William James:

For my own part, I do not know what the sweat and blood and tragedy of this life mean, if they mean anything short of this. If this life be not a real fight, in which something is eternally gained for the universe by success, it is no better than a game of private theatricals from which one may withdraw at will. But it feels like a real fight,—as if there were something really wild in the universe which we, with all our idealities and faithfulnesses, are needed to redeem; and first of all to redeem our own hearts from atheisms and fears.

P.S. – The show was fantastic, Ariella is now officially “on the bus”, and it was a dream come true for me. And while the 106-degree heat that we were welcomed with was much hotter than we were expecting. Dead and Company was an inferno in comparison. The great performance and the physical and mental preparation resulted in the heat being a non-issue as it was truly mind over matter. What a fantastic night! 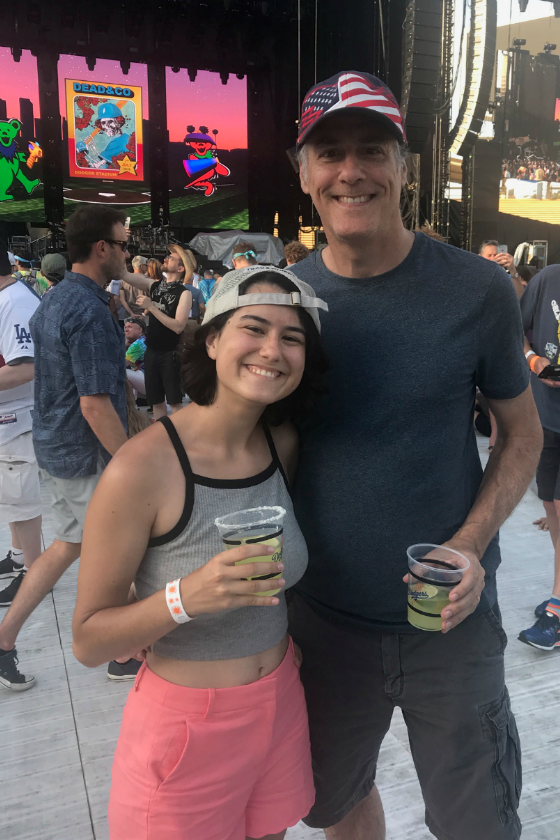