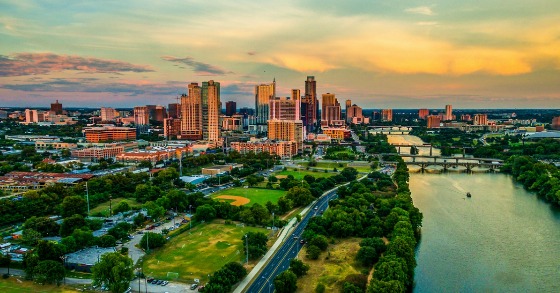 [2018 UPDATE ] The Dallas Fed released its Texas Manufacturing Outlook Survey, January 29, 2018. The data was collected Jan. 16–24, and 97 Texas manufacturers responded to the survey. As you can see the business indicators in Texas remain strong as following chart shows: 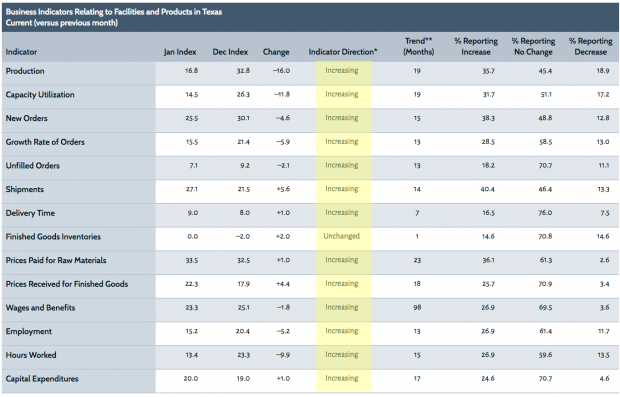 Note the highlighted section showing that every indicator is “increasing”.

Here are some key excerpts from the report:

Most other measures of manufacturing activity also pointed to somewhat slower growth in January after the rapid expansion seen in December. The new orders index moved down from 30.1 to 25.5, and the growth rate of orders index fell six points to 15.5. The capacity utilization index also stayed positive but declined, dropping 12 points to 14.5. Meanwhile, the shipments index rose six points to 27.1, indicating a pickup in growth.

Perceptions of broader business conditions remained highly positive in January. The general business activity index pushed up further to 33.4, its highest reading in more than 12 years. The company outlook index remained elevated but edged down to 27.8.

Labor market measures suggested a slight deceleration in employment growth and longer workweeks this month. The employment index came in at 15.2, down five points from December. More than a quarter of firms noted net hiring, compared with 12 percent noting net layoffs. The hours worked index declined but remained positive at 13.4, suggesting a continued lengthening of workweeks.

We continue to see strength in our Texas apartment portfolio in terms of rental demand and higher lease rates, which is consistent with a relatively strong economy as this report indicates.

Houston is particularly strong as the economy continues to produce a significant number of jobs and there is not enough new housing being supplied, which is resulting in higher rents and home prices. Despite being hit hard by Hurricane Harvey in late August early September 2017 the Post Harvey outlook is strong.

CWS has had a strong presence in Texas for countless years and our belief in the continued strength of the Texas economy continues.