What Movie Are You Creating And Watching? 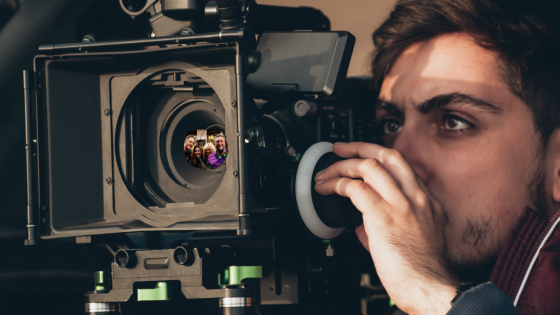 Scott Adams is someone I follow and I appreciate his insights about persuasion and human nature. He often says that everyone is living their own movie. They write the scripts and they have cast them with characters they have developed with personalities they have created for them. As a result, the narrative plays out based on their points of view and biases. They are highly invested in their movies. Given this, it is very hard to change people’s minds because they’ve already made them up and they are looking for reasons to confirm what they believe versus being open-minded to disconfirming evidence.

“We just saw it from a different point of view.”

I have discussed confirmation bias before and I’m sure I will again because it is such a powerful psychological force that contributes to our blindspots and suboptimal decision making. From time to time I check out notifications on Twitter. I rarely surf it because there is so much noise and distasteful content but if I’m alerted to tweets by people I respect and find intriguing I will periodically check them out. 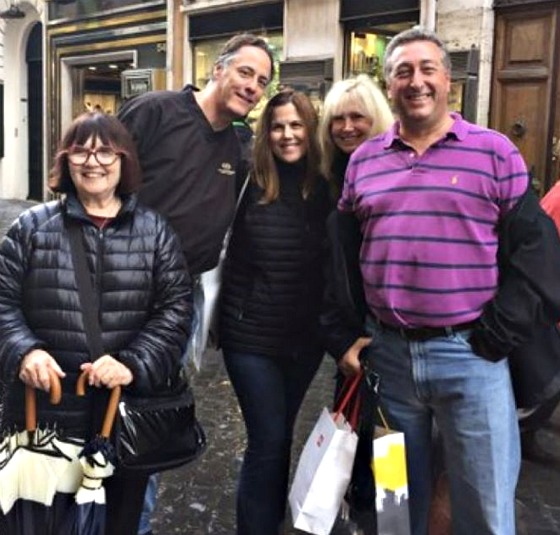 Someone I follow is Barry Ritholtz. I had the opportunity to spend some time with him a couple of years ago while we crossed paths on a cruise together. He is a very nice guy and quite bright. From my interactions with Barry and from what I have read I would classify him as center-left politically with a bias towards common sense and empathy. A very good combination from my perspective. In no way does he lean heavily to the right. With this brief overview, I found myself fascinated by a Twitter thread started by Robert Reich, a very strong liberal who was formerly Secretary of Labor. He is very outspoken about inequality and what he feels is a rigged playing field favoring the rich. This is what he said about how to become a billionaire in the United States. 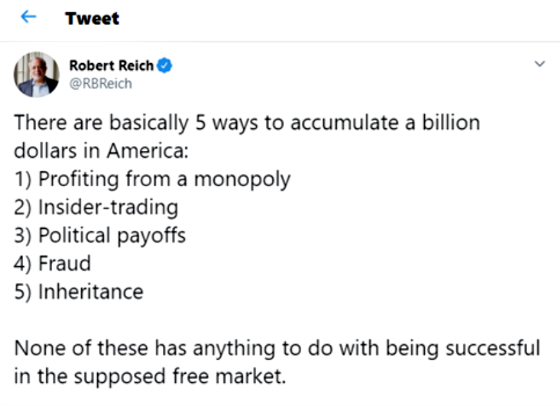 Barry, in response to Reich’s tweet and, who, as I mentioned earlier, is by no means a conservative, retorted with the following.

This is quite shocking and a stark example of how people can see the world in completely different ways. I am much more aligned with Barry. With that being said, however, I recognize that we have benefited in this country from what our tax dollars pay for in terms of education, infrastructure, technological spin-offs from government investments, and a health system that, while it has its flaws, still produces remarkable innovations that improve the length and quality of our lives.

I’m not one of those people that believes the government has no role and provides no value whatsoever. On the contrary, I think there needs to be a healthy balance between the private sector and incentivizing risk-taking and innovation and a strong government system that provides a social safety net and protects Americans from enemies and criminals both domestic and foreign, from health risks, and from people being preyed upon by those who have more power and exploit that power for their own advantage and at great cost to those impacted by it. And, our society also benefits greatly from those talented, fanatical, and committed people who start and grow businesses, scale them, staff them with an ever-growing pool of talented people, secure new facilities, deploy technology effectively, stay on top of trends to ensure that their firms are delivering ever more valuable goods and services, finance the growth of the firms optimally, and to generate consistent and growing profits. I know I’m missing a lot more critical success factors but hopefully, this conveys the point that this is not easy and very few people can do this successfully. They also generate a lot of meaningful work and compensation and also tend to give back through significant charitable investments.

Bill Gates said that it’s easy to be a visionary but it’s very hard to be a CEO. Managing people is difficult, especially when a firm is growing rapidly. The following chart shows the growth in annual revenues for Microsoft since 2002. In 17 years revenues have grown by nearly $100 billion per year! Come on Reich, did Bill Gates really not earn his wealth? Yes, some would argue that he earned it through it becoming a monopoly but this is too simplistic.

First, let’s look at the charts. 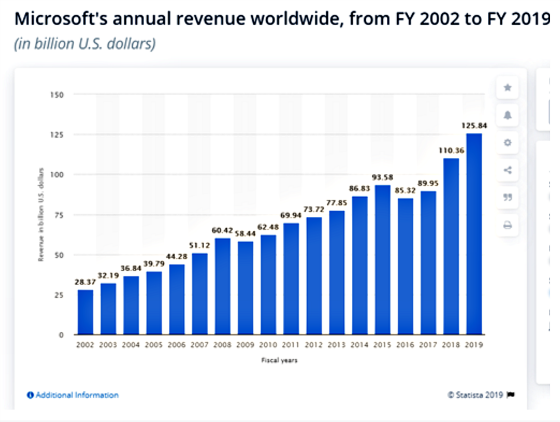 One can see how the stock has rocketed higher since 2015 after Satya Nadella took over as CEO in 2014. 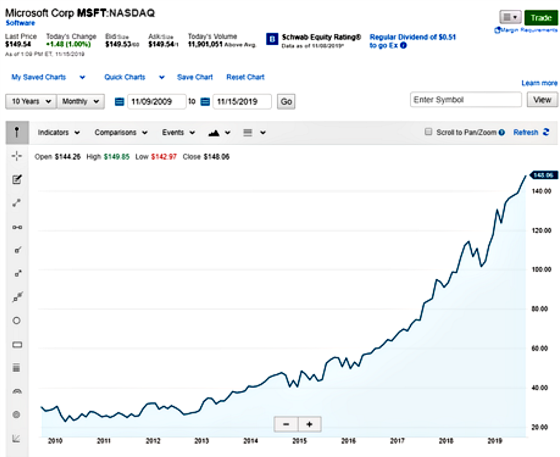 This is what Peter Drucker said about Microsoft and it being a monopoly when he was interviewed in 1998:

So I’m not worried about Microsoft’s monopoly. Sure it’s a monopoly, but… Three of my grandchildren are in computers, and they all maintain that the PC is yesterday anyhow and that the Internet is the thing. I don’t understand a word they are saying, but that’s irrelevant. Certainly, it is most unlikely that Microsoft, if it behaves like a monopoly–and it does at present–can maintain itself very long. Ten years perhaps. I’m not worried about it.

Drucker was right on (surprise surprise). Microsoft had to make an aggressive pivot to shifting its services to the cloud and being cloud-centric as the PC era was being subsumed by the internet and mobile devices. The following chart shows how shipments of PCs have been on a steady decline since 2009. PC-centric applications were becoming less relevant in the internet/cloud age. 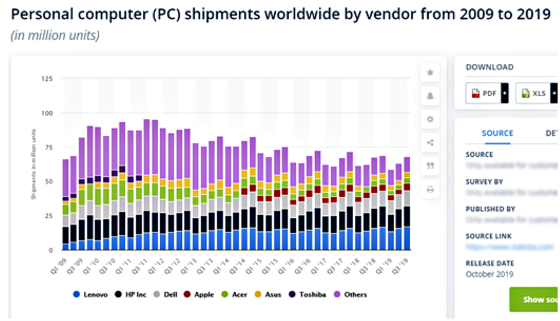 Another interesting point of view related to monopolies comes from the CEO of CoStar who has built a phenomenally successful company but who also has a lot of detractors due to the company’s aggressive business tactics and pricing for its products that don’t have a lot of competition. Here is the stock price of CoStar. It too has been a phenomenal performer. 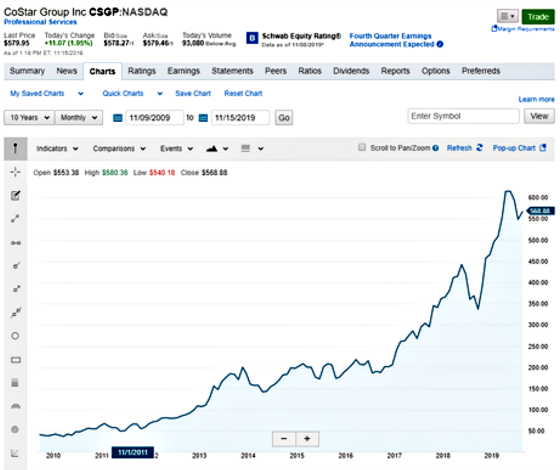 This is what Andy Florance said in a 2017 interview with Bisnow.

Bisnow: Look, it’s obvious to me and many others that you all have dedicated a large amount of resources to battling Xceligent. It’s not the first time that you’ve gone up against a competitor. And I think most of your competitors would paint CoStar as Goliath to their David. Is there any truth to that? Is CoStar a Goliath? Are you a monopoly in your eyes?

Florance: There are three questions compounded in there. If you invent something, the day you invent it you have a monopoly in it, in theory. We were the first company to produce online listing services for commercial real estate. We were the first company to ever put assessor databases online. We were one of the very first, if not the first, company to put a real estate picture online digitally. We were the company that invented the boundary search function for searching for real estate online. We probably invented about half of the analytics that people use in commercial real estate. Forbes named us as one of the 10 most innovative software companies in the world. And if you’re constantly innovating and doing new things, if you invent something, you’re the only one doing it. So we’ve certainly worked very hard and consistently for 30 years.

We’ve operated an ethical and successful company through hard work and innovation. We by no means are ashamed that we’ve been a successful U.S. company creating 4,000 jobs for people and providing very useful services to 30 million people a month that use our websites. Thirty million people come to the websites. We believe we provide them good value.

It’s easy to use sweeping generalizations to paint people with a broad brush based on one’s biases. Yes, Microsoft may have become a monopoly (temporarily), but as Florance discusses, it takes a lot of hard work, innovation, investment, talent development and management, capital access, and customer awareness to build a company to get to that point.

We all have biases. One of mine is that I believe that most of the billionaires in this country fall into the Ritholtz camp versus Reich’s. I have worked with some amazing partners and business counterparts who have particular gifts that I have seen put into action and who have added tremendous value over the years. They often come from humble origins and have made the most of every opportunity and have been able to accomplish things that most people cannot because they either don’t have their gifts or their focus and work ethic. They have earned their wealth.

I have found that when working with people that if I can ascertain the prism through which they see the world (their biases) and how they react to stimuli, both verbal and nonverbal, then I can help formulate a frame of reference when interacting with them to communicate in ways that increase the probability of being heard and perhaps altering their behaviour if I think they are getting in their own way, especially if their actions and attitudes are not productive for their lives and/or the company.

So at the end of the day, the movie I’m writing and seeing is populated by characters who are writing and seeing their own movies but I’m trying to figure out what it is they are watching and how it directs their lives. It’s a pretty complicated comedy but oh so interesting.

One comment on “What Movie Are You Creating And Watching?”