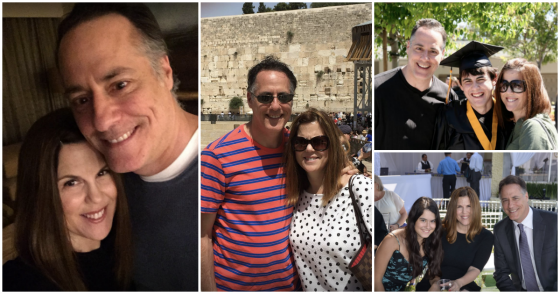 Last Friday was Roneet’s birthday. She would have been 55. I thought this would be an appropriate time to discuss ways I have tried to honor her.

As I’ve gotten older and have had more resources available in which to invest in other people and organizations, I have thought more about philanthropy. I never really had a specific plan or an underlying strategy. That all changed with the passing of Roneet and it became clear to me that I am much more moved and impacted by people who have an extraordinary amount of talent, commitment to their field, and an intense desire to make a difference with their work. I am a big believer in backing people, ideas, and values in an effort to make a difference.  I have written about fanatics before and believe more than ever that fanatics have it within them to change the world. Here is some top of mind fanatics that have clearly made a dent in the universe and created tremendous wealth as well as enormous charitable contributions.

When Roneet got sick we were at a loss to find solutions. It was obviously a very difficult time and solace was not easy to find. She was suffering from significant neurological damage as a result of an accident and, to make a long story short, we ended up making contact with a remarkable neurologist at UCI Medical Center named Yama Akbari. Despite not knowing us, having no one we knew in common (I would soon learn we actually did), and her being treated at a different hospital, he responded to an email that was sent at 11 p.m. within an hour and he came the next day to evaluate her, after receiving the hospital’s permission to do so, and he took great care in studying her condition and he did so very methodically. He analyzed all of her labs, vitals, and anything else of critical importance. We had to make some very difficult decisions with regard to sustaining life if that’s what you want to call it, or moving forward and ending it mercifully. I don’t think we would have been able as a family to accept the decision that we made without the presence and comfort of Dr. Akbari. It turned out that we had a mutual friend in common and my friend could not speak highly enough about him. As time went by, I got to know him better and was even more impressed about what a wonderful and special man he is and how he really has the ability to change the world through his work. His work is deeply involved in understanding how the brain and the body respond to cardiac arrest and if there are ways to intervene more quickly so that the outcomes can be better. I asked him about how common is cardiac arrest for people in the United States. He provided me with some very sobering statistics about the poor chances that people have when they have a cardiac arrest, particularly when it occurs outside a hospital setting. This is some of what he wrote to me. Please keep in mind that these are annual statistics and not cumulative. When looked at cumulatively the numbers can be quite large over a decade or so.

To answer your question, there are over 550,000 people in the USA alone who suffer sudden (unexpected) cardiac arrest each year. Around 60% of these occur out of the hospital (e.g. at home or a public place) and the remaining 40% occur inside the hospital (often in the emergency room, the ICU, or elsewhere in the hospital). For the out-of-hospital cases, about 1/3 of them are successfully resuscitated with CPR (e.g. Roneet’s case) by EMT/paramedics and are transported to a hospital by ambulance. But among these 1/3 that make it to a hospital after successful CPR, only a fraction (about 1/3 of this 1/3) make it out of the hospital alive (i.e. discharged to a nursing facility or to home) while the rest pass away in the hospital. So overall, among all the people who suffer cardiac arrest outside of the hospital, only about 10% of them actually survive. Most of these survivors who are discharged home have some neurological deficits but some do well and lead a meaningful life with little to no deficits.

Among the patients who suffer cardiac arrest inside the hospital, up to half of the patients survive since they are fortunate to receive immediate help from medical personnel. But among these survivors, less than half make it to discharge out of the hospital. So overall, only about 15-20% of all in-hospital cardiac arrest sufferers survive to discharge, and many of these survivors have some neurological deficit.

Putting all this together, physicians like myself will see almost all the patients who either suffer in-hospital cardiac arrest (about 200,000-250,000 in the USA) at some point in their hospital stay. And we also see the out-of-hospital cardiac arrest sufferers who receive successful CPR by EMT/paramedics and make it to the hospital (so about 100,000 or so).

And so what is he hoping to accomplish with his research? This is what he wrote to me:

The type of research we do focuses on not only treating patients who make it to the hospital after successful CPR but also towards directly improving CPR, whether CPR is performed inside the hospital or outside the hospital (e.g. at home or a public area). For example, my dream is to use our most recent discovery, which is in the process of being published, to eventually build gadgets and a resuscitation kit to improve CPR capability for EMT/paramedics when they arrive on the scene to treat people like Roneet. If our lofty research goals are ever achieved, we could buy an extra few minutes of protecting the brain while EMT/paramedics are treating a patient and transporting the patient to the hospital. This means that our research has implications for far more than the 300,000-350,000 estimated above because we might be able to save lives that currently have no chance and never make it to the hospital. The only people that our research would have no benefit for are the patients who suffer cardiac arrest for prolonged periods to the point where they are found down far too late and the brain damage is irreversible. But in this day and age, such patients are a small minority due to bystanders/loved ones immediately calling 911 and some bystanders being able to do basic CPR until EMT/paramedics arrive on the scene.

In order to further Dr. Akbari’s research and to thank him for all he did for us, as well as honor Roneet, I set up the Roneet Carmell Memorial Endowment Fund. To call attention to her fund as well as the cutting edge research being done by Dr. Akbari, as well as Dr. Jack Lin, who has been instrumental in treating my son Jacob’s epilepsy in ways that have improved the quality of his life, the two of them will be doing an inaugural lecture on May 23, 2019 (the 24th anniversary of Jacob’s stroke). Here is the information for the event and a link to register for anyone that wants to attend. There is no cost and it is not a fundraiser. It is designed to educate and create awareness. 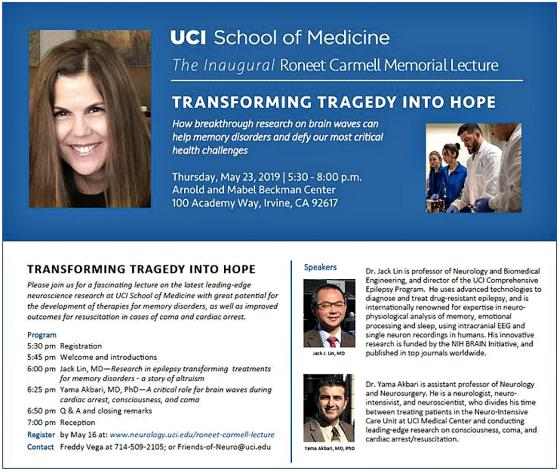 Roneet knew Dr. Lin and the two of them formed a very nice bond over the years and while she never got to know Dr. Akbari, at least consciously, I know the two of them would have been so connected because they are two peas in a pod in terms of their love, compassion, and intense devotion to those for whom they work and love.

If you would like to contribute to The Roneet Carmell Memorial Endowment Fund you can do so by clicking on this link or on the button below. Any contribution will be greatly appreciated and it will be going to a great cause.