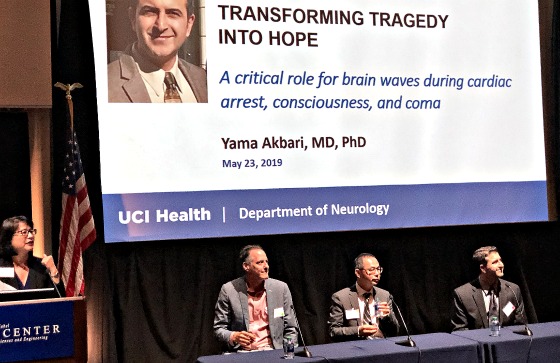 The following are the remarks I gave at the inaugural lecture that was held at the University of California, Irvine on May 23rd, 2019.

I want to thank you for coming out tonight for this event. It really means a lot to me as this is such a personal cause. I also want to thank Nancy, Freddy, and Gail at UCI who have done a terrific job of helping coordinate this event alongside Mijanou Pham who is an extraordinarily talented event coordinator. She and Roneet worked closely together planning big events at my company and I’m so grateful for her help in planning this one. I also want to thank Phil Anthony for his very generous participation to help make this event possible. Your support is so greatly appreciated.

The two doctors speaking tonight have been instrumental in our lives. The first one, Jack Lin, has been very important in the care of my son Jacob while Yama Akbari was involved with Roneet after she had her tragic accident. I will use the time to first talk about Jacob and Dr. Lin and then after Dr. Lin presents I will come back up and talk about how we came to know Dr. Akbari.

When Jacob was two he had a very rare reaction to the chickenpox that culminated in him having a stroke. It was a very harrowing day that changed our lives.  We didn’t know if he was going to make it. He was in the intensive care and after his brain started to swell he was put into an induced coma. The attending E.R. doctor told us that he was within 30 minutes of not making it. Fortunately, he did recover and after two weeks in the hospital, he was able to return home. We didn’t know what the future would hold in terms of how he would be physically, mentally, and emotionally impacted. Never underestimate an indomitable spirit like Jacob’s, however, as he has tackled every challenge thrown his way with an incredibly positive attitude.

The one impairment that has been the most challenging has been epilepsy that appeared when he was eight when he had his first seizure. He has been on anti-seizure medication since then. Unfortunately, they had some negative side effects, particularly when it came to diminishing his energy. Roneet was an unstoppable force when it came to Jacob’s medical care and she was determined to improve the quality of his life. In a very crazy sequence of events that I don’t have time to share right now, we ended up being referred to Dr. Lin who we were told was an epileptologist. This is embarrassing to admit, but we never knew that such a discipline existed and we had a son who had had epilepsy for 15 years! We came to learn that there is a shockingly low number of Epileptologists for a disorder that is fairly widespread.

We have come to learn that finding the right mix of medicines is as much art as it is science and after about two years of trial and error it appears that Jacob has the right cocktail for him such that he has been seizure free for over one year and he has been able to function quite effectively. With the exception of a few months, during those two years, Jacob could not drive and Roneet took it upon herself to drive him to where he needed to go pretty much every day she was available to do so. Her commitment to Jacob was unwavering.

When Dr. Lin, Dr. Akbari, Nancy Young, and I met a few months back to discuss putting this lecture together in honor of Roneet and the creation of this memorial endowment fund, it was obviously important for us to align on a day that everyone was available and we could get a strong turnout. It became clear as we were meeting that realistically it had to be a date in May. Once May was the month I became laser-focused on today, May 23rd, 2019. And why was today so important to me? It’s because on this day 24 years ago Jacob had his stroke. The day the course of our lives changed forever. Having the inaugural lecture has huge symbolic meaning to me and would have made Roneet so proud knowing it was today given how far Jacob has come since that day 24 years ago. He is a college graduate, he has a masters degree in coaching and sports administration, and today works as a basketball coach. Most importantly he is a terrific person and has a huge heart, just like his mother.

Roneet and Dr. Lin got to know each other during the course of Jacob being under his care and they formed a very nice relationship with each other. This was not the case with Dr. Akbari, however, as sadly they never got to know each other. What I do know, however, is that had they had the opportunity to meet each other, they would have been connected on a very deep level and formed a very strong bond as they are and were both very kind, caring, compassionate people. Roneet was someone who expressed love and empathy with whomever she came in contact and, in the short period of time that I’ve gotten to know Dr. Akbari, he has displayed many of these same characteristics. He is such a warm person who cares so much about what he does and who he does it for. I believe that by sharing the story of how we met that it will shed some light onto his personality and character.

After Roneet’s tragic accident she went into cardiac arrest and lost oxygen for many precious minutes. It was a very devastating situation and something that I hope no one ever has to experience in their lives. We were faced with some very difficult decisions. The care she was getting in the hospital was excellent. With that being said, however, the impact on all of us was so devastating that we felt like we needed some additional help in guiding us through what some of the options were if there were even any.

One night in the waiting room we were with two family friends who were doctors. As we were discussing getting another opinion, one of the doctors said that UCI isn’t that far away, it’s a great hospital, and there is probably someone there who might have the expertise that could help us. She went to the website and began reading the biographies of the neurologists on staff at UCI to see if any of them might be a good fit for us. She eventually got to Dr. Yama Akbari and after reading his biography it was clear he not only had the most relevant experience for Roneet’s case but the perfect background for it. The other doctor that was in the waiting room got on his laptop and he composed a very eloquent email to Dr. Akbari at around 10 or 11 PM that night. He described the situation and said that “I know you don’t know us but if there’s any way you could evaluate Roneet it would really help the family a great deal.” Within an hour or two, there was a reply. It was a little before midnight as I recall. He responded and to make a long story short, he and I got in contact directly. We obviously didn’t know each other and I never dropped a name as I didn’t know anyone that knew him (I subsequently found out we had a mutual friend).

We arranged for him to come to the hospital the next day in the afternoon and the people at the hospital were incredibly welcoming, They were open to him examining Roneet, giving him access to all of their labs and scans and making themselves available to answer all of his questions.  After doing a very thorough examination Dr. Akbari gathered us in a private room and sat down with us for about two hours answering all of our questions and addressing all of our concerns and getting us to the point where we knew what we had to do.  It was the hardest thing I ever had to do in my life and I wouldn’t wish it on anybody but we knew the quality of life that Roneet had in front of her was essentially non-existent. She was not living and never would be. Dr. Akbari helped us to bring closure to a very devastating situation. She was such a beautiful, vibrant, vivacious woman who lit up every room she walked into and she would never be able to do so again. She was leaving this earth at the peak of her beauty and love and humanity, and we have Dr. Akbari to thank for helping us at the absolute lowest point in all of our lives.

The video above is the entire Inaugural Roneet Carmell Memorial Lecture May 23, 2019, at UCI Health.

I am a big believer in backing people with extraordinary talent and game-changing ideas and the fierce determination to transform those ideas into action and results that can change humanity. I started this fund to support the research of Dr. Akbari because we don’t want anyone to have to go through what we went through. I know it will take years to see transformative breakthroughs as this is very complicated and complex work but if there is someone to bet on to transform tragedy into hope then Dr. Akbari is the person.