The Ever Growing Importance of Ideas 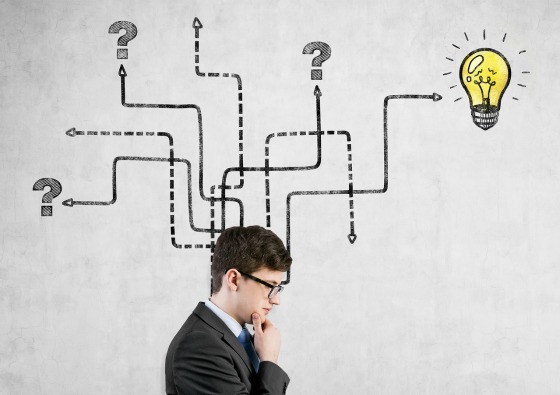 As property values have escalated greatly in major cities, particularly with a tech orientation, I ask myself if secondary markets make more sense as the cost of living is cheaper and yields are initially higher. The tradeoff historically has been far less growth potential and lower appreciation. Now the question is whether too much growth potential is priced into property values that may not materialize.

Branching Out in New Areas

I keep wondering when companies may start branching out more aggressively to lower cost areas. We may see this with Amazon as many of the 20 finalist cities are lower cost metros. In addition, many tech companies have established a presence in cities like Austin, Dallas, Denver, and Atlanta as an example.

One company I follow, CoStar, has expanded significantly in Richmond, VA and is delighted with the quality of people they can attract because of the quality of life that is available there. The after-tax, after-housing cost pay is significantly better for their workers there than in San Francisco. And yet, despite this, nothing really competes with the Bay Area, Seattle, Los Angeles, and New York City in terms of the agglomeration of talent, companies, venture capital, great universities, bankers, legal expertise, management expertise, etc. that these cities have.

They are in some ways victims of their own success as people want to be there because that’s where the jobs and potential riches are and companies are there because that’s where the people are. Now they have become very crowded and expensive as a large number of high paying jobs and skewed income and wealth distribution lead to very high housing costs, long commute times, and the pricing out of service workers. Are we now at a tipping point where there will be a large scale exodus away from these high-cost areas? I don’t think this is the case for the best and the brightest, although I think we will continue to see tech companies grow more rapidly for many of their functions in lower cost areas. So why do I continue to see the brain trust still remaining and growing in these tech meccas? One word: Ideas!

I came across some fascinating research that has created more clarity for me as to why companies need to be in these locations. I read a research report that really impacted my thinking. It was written by researchers from Stanford and M.I.T. (appropriate for the topic) called Are Good Ideas Harder to Find? The short answer to the question posed in the title is a resounding yes!

The epitome of technological progress has been Moore’s Law which has been a constant in the semiconductor space since 1965. The law was articulated by Gordon Moore, one of the founders of Intel, who stated that the number of transistors in a dense integrated circuit doubles every two years. He initially said that it would double every year and revised it in 1975 to every two years. So far it has held true but of course, trees cannot grow to the sky so at some point, the growth will moderate, which is what we are starting to see.

One of the hallmarks of our economy is that there is a great incentive to innovate either through more growth and profits or just to keep up so you can stay alive. The byproduct of this intense competition and creative destruction is a continuous improvement in living standards. The key to this is due to the unique qualities of ideas. Ideas are considered a nonrival good, meaning, unlike rival goods which become used up as they get consumed and only one person can consume one unit at a time, ideas do not and can be consumed by many people at the same time and therefore can lead to even greater output.

Think about software or a great song being streamed online. Millions of people can be using the software or listening to the song at the same time which is not the case for something like a dwelling unit, which can only be consumed by one household unit at the same time, although units can house different numbers of people. One hamburger typically feeds one person at one time while Google and Facebook can be used by billions simultaneously with a very little marginal cost to those companies. There are high costs to create the platform but once it is up and running and sufficiently populated, it is highly profitable to own and operate as variable costs are quite low. The wealth created by Google and Facebook in terms of market value relative to the inputs taken to create these behemoths has been extraordinary.

When I think of innovation and productivity growth I think that it is somewhat constant. Add inputs and get more output, usually at a somewhat constant rate. Boy was I wrong as I learned after reading the study. It turns out that ideas are becoming increasingly more difficult to generate and monetize and that absent huge increases in inputs of researchers, engineers, etc., output would be dropping each year. This is happening in virtually every major industry without exception. The research effort is rising sharply while productivity is dropping significantly.

This would seem to mean that tech companies would continue to expand in tech-centric areas where there are agglomerations. Urban expert Jane Jacobs said cities are about ideas. And as ideas are harder to come by that can be monetized and generate long-lasting returns, it would seem to make sense that companies will go where the smart workers are and want to be. At the same time, however, housing costs are pretty challenging so they may have to look in other areas. Perhaps that is why Amazon is looking at another city for HQ2. 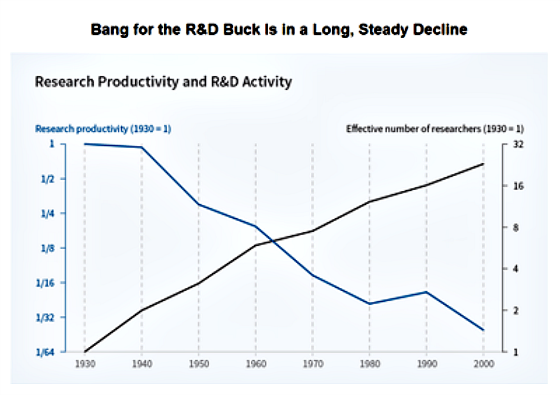 Semiconductors are a great microcosm of these trends. The number of researchers required to double chip density today is more than 18 times larger than the number in the early 1970s. This has resulted in research productivity dropping by 6.8% per year. It is now 18 times harder to generate the same exponential growth behind Moore’s Law than in 1971. The same is true for seeds, which has been dropping at 5% per year in terms of productivity.

It requires 15 times more researchers today than it did 30 years ago to produce the same rate of firm revenue growth.Click To Tweet

Overall, it requires 15 times more researchers today than it did 30 years ago to produce the same rate of firm revenue growth. The economy has to double its research efforts every 13 years just to maintain the same overall level of economic growth. This is necessary to offset the increased difficulty of finding new ideas.

Perhaps the stress of high tech workers to make it in the Silicon Valley and deal with the high housing costs, long commutes, long work hours and corresponding financial and family stress may impact life expectancy growth rates in that sector such that companies will start seeking out lower cost, less pressure-filled markets to offer a better quality of life. I really don’t know at this point but it’s something I will continue to wrestle with as I think about the best places to deploy capital in the apartment industry over the next ten years. I do know that growth-generating ideas will become even more difficult to come up with as time goes by and this will continue to require that American companies be able to attract and cultivate the best talent in the world and I think many of these people will continue to be attracted to the Silicon Valley, Seattle, Los Angeles, New York City and to a smaller extent, Dallas, Houston (for energy), Austin, Denver, Raleigh, and Atlanta.

What is the most economical way to fund new ideas? What role will property values play in selecting future tech centers?

One comment on “The Ever Growing Importance of Ideas”