Fake News - The Reality Is Not What You Think 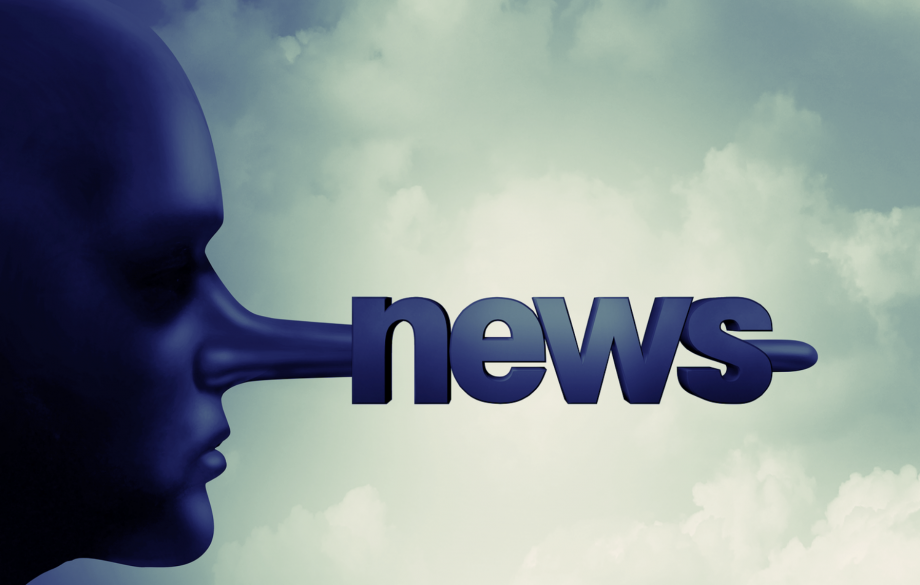 I recently completed Titan: The Life of John D. Rockefeller, Sr. by Ron Chernow and it is a wonderful read about the fascinating life and times of John D. Rockefeller. Ida Tarbell, one of the great muckraking writers and profilers who gained her fame while writing for McClure’s was personally impacted by Standard Oil’s brash business tactics. In a world of eat or be eaten, her father was eaten and it impacted his life in negative ways that left scars on Tarbell’s psyche. It reminded me a lot of the chip Steve Bannon carries on his shoulder towards big banks and large corporations who were bailed out during the financial crisis or laid off thousands of workers to protect their shareholders, his father being one of the victims.

Rather than trying to remain neutral throughout her 19 part expose on Rockefeller and Standard Oil, she followed Henry James’ advice to “Cherish your contempts.”

Fake News – Not What You Expect

Everyone carries around with them some resentment. Some simmer below the surface and don’t have a meaningful impact on our lives while others can be more pervasive and potentially toxic. Here is a form of resentment that has been transformed into fuel for growth and success. This is LeBron James talking about Isaiah Thomas’ first game as a Cavalier after being traded from Boston and spending many months rehabbing his hip. He was a relatively low pick in the draft because of his height and this has served to fuel Thomas to show how wrong all of the teams were that passed on him. Here is what LeBron said:

Human nature is such, however, that many of us do not transform resentment and contempt into something positive but we use it to reinforce a feeling of entitlement and victimhood. And this makes us susceptible to being receptive to messages that amplify our resentments and make us feel justified in having them and entitled to some form of compensation for being used and exploited.

The more I go through life the more I believe that people have their minds made up and look for confirming evidence to support their beliefs and ignore disconfirming evidence. While this is ultimately financial suicide for investors to be so closed minded, when it comes to political beliefs, however, it may be a necessity for psychological coping and survival for many.

With 2018 now upon us, another election is in our midst. It seems hard to believe as it feels like we’re still in the middle of the 2016 one. Friday, February 16, 2018, special counsel Robert Mueller indicted 13 Russian nationals and three Russian entities for allegedly meddling in the 2016 presidential election, charging them with conspiracy to defraud the United States by having a “strategic goal to sow discord in the US political system”.  The day before, as the news broke of a school shooting in Parkland, Fla., on Wednesday, hundreds of Twitter accounts believed to be under Russian sway pivoted. Troll and bot-tracking sites reported an immediate uptick in related tweets from political propaganda bots and Russia-linked Twitter accounts. These are the same Twitter accounts that retweeted candidate Trumps tweets over 470,000 times during the 2016 election.

This makes the issue of fake news more prominent. So how much of a problem was it in the 2016 presidential election? According to research entitled Selective Exposure to Misinformation: Evidence of consumption of fake news during the 2016 U.S. presidential campaign it was fairly pervasive.  While the authors believe that it is unlikely that fake news changed the outcome of the election they do point out the following:

“[E]xposure to it or similarly dubious and inflammatory content can still undermine the quality of public debate, promote misperceptions, foster greater hostility toward political opponents, and corrode trust in government and journalism.”

Perhaps the Washington Post’s new tagline is spot on: Democracy dies in darkness.

Before turning to the findings from the report and key data, I would like to point out that there have been other times in our country when highly partisan newspapers and magazines proliferated greatly with the intention of influencing public opinion and the electorate. In fact, one of the reasons McClure’s was founded was to counteract that. This is what Gentzkow said about McClure:

“A man with a weakness for big, startling facts, McClure commissioned articles on new gadgets, scientific research, and futuristic technologies. This penchant for facts enabled him to spot Tarbell’s talent for enlivening a dry subject when she wrote an entertaining article about the paving of Parisian streets. Instead of the scandalmongering being offered by Pulitzer or Hearst, McClure wanted to analyze complex issues and explore them with scientific precision.”

This type of investigative reporting still does exist but it is subsumed by highly partisan and emotional “echo chamber” opinions designed to persuade but wrapped up in a package of facts and reality to convey credibility.

The authors of the study wanted to “evaluate whether people differentially consume false information that reinforces their political views as theories of selective exposure would predict.” The design of their study provides “the first individual-level estimates of visits to fake news websites, including who visited these websites, how much and which types of fake news they consumed, and the probability that fact-checks reached fake news website readers.”

So what were the findings?

I won’t go into how they determined which websites are deemed fake news. You need to read the study to understand their methodology.

With an estimated 27.4% of Americans 18 and over having visited an article on a pro-Trump or pro-Clinton fake news website, one might think this to be a relatively small percentage. On an absolute basis, however, it translates to more than 65 million potential voters. On the other hand, the authors estimate that fake news consumption “represented an average of approximately 2.6% of all the articles Americans read on sites focusing on hard news topics during this period.” The fake news they did read, however, was heavily skewed to pro-Trump articles. The average person saw 5.45 articles from fake news websites during the measurement period with 5.00 being pro-Trump articles.

Here is a finding I find rather surprising. The hard news, political junkies were also more apt to visit fake news sites. On the other hand, for most people, it is still a relatively small percentage of the political news they consumed during the measurement period.

“Finally, we show that individuals who engage in high levels of selective exposure to online news, in general, are also differentially likely to visit fake news websites favoring their preferred candidate. In general, fake news consumption seems to be a complement to, rather than a substitute for, hard news – visits to fake news websites are highest among people who consume the most hard news and do not measurably decrease among the most politically knowledgeable individuals.”

Another interesting finding, but not surprising, is how the true believers, particularly among the most conservative Trump supporters, consumed fake news as the following graph shows. 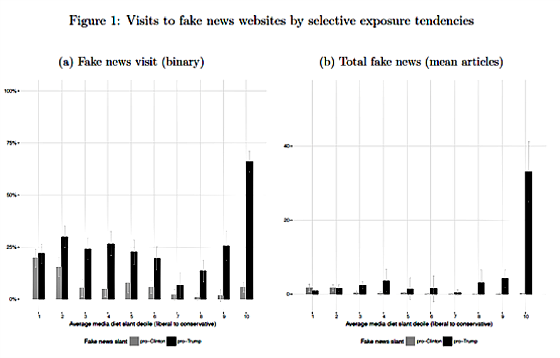 “[T]he 10% of Americans with the most conservative information diets consumed an average of 33.16 articles from pro-Trump fake news websites versus just 0.43-3.83 in the first eight deciles and 4.20 in the ninth. In total, 58.9% of all visits to fake news websites came from the decile of news consumers with the most conservative information diets.”

Facebook is clearly the biggest gateway to fake news as the following chart shows. 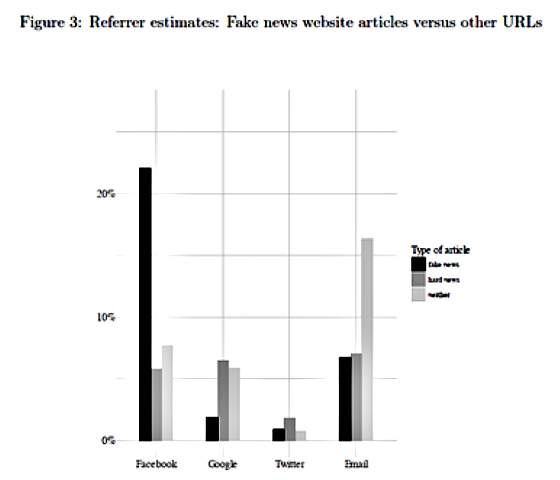 Once again, Trump supporters show the most active use of fake news via Facebook as compared to Clinton supporters as the following chart shows. 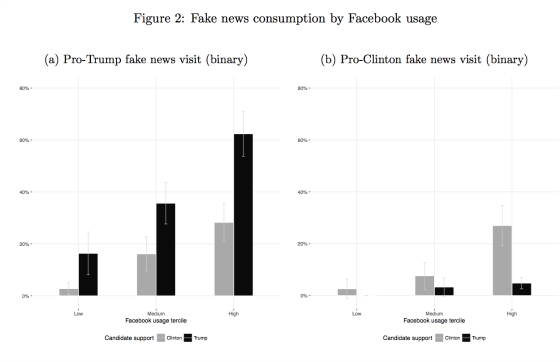 “Visits to pro-Trump fake news websites increased from 2.8% among Clinton supporters who do not use Facebook or use it relatively little to 16.1% in the middle tercile and 28.2% among the Clinton supporters who use Facebook most. The increase is even more dramatic among Trump supporters, for whom visit rates increased from 16.3% in the lowest third of the Facebook distribution to 35.6% in the middle third and 62.4% in the upper third.”

While the authors conclude that the “echo chamber” of only putting ourselves in environments that reinforce our beliefs is deep, it is also relatively narrow in that the most active consumers of fake news represent only 10% of the public. Despite this, these true believers can have an outsized influence.

“Relatively few Americans are deeply interested in these extreme forms of misinformation, but they are consumed in large quantities and disseminated widely on social media. These small groups can thus propel fabricated claims from their echo chambers to widespread visibility, potentially intensifying polarization and negative affect toward opposing candidates. This pattern represents an important development in political information consumption.”

If you’re a Clinton supporter then you’re probably saying “I told you so. Those Trump supporters are closed-minded, easily deceived people who were and are being taken advantage of by a charlatan,  master persuader” while if you’re a Trump supporter you’re probably saying “I don’t care about your academic mumbo jumbo. You elite, ivory tower types don’t have any clue about what it’s like in the real America where we have to fight every day to get by and survive and never know when our job might get eliminated due to globalization and automation. I know what I see, feel, and think and no study will tell me I was duped.”

While I’m not optimistic that these echo chambers will diminish, I do think important steps are being taken by Facebook and Twitter to acknowledge the problem of fake news and to start putting in much stronger filters to weed them out. If they don’t do something about it then the government will and as we have seen from the Mueller indictments they already have.

Shortly after the Mueller indictments were made public one of those indicted, Yevgeniy Prigozhin, owner of the troll factory at the top of Mueller’s list, released a statement saying,

“Americans are very impressionable people. They see what they want to see. I have great respect for them. I’m not at all upset that I’m on this list. If they want to see the devil, let them see one.”

Now that something is being done about the information warfare on the United States will it change the face of fake news?