Rent Control - Then and Now 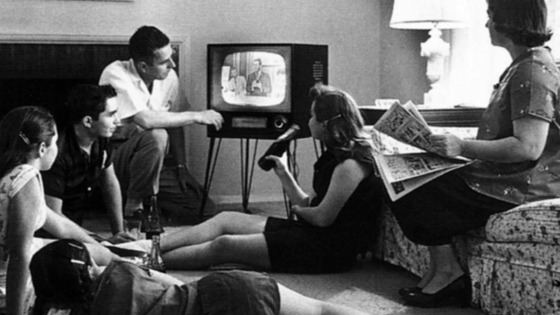 With rent control being passed in California, Oregon, and New York, government intervention in rental housing is heating up. This is something we have been predicting for a number of years given the housing shortage and relatively stagnant wages for lower to middle-income earners. We also had a lot of experience with it when we owned manufacturing housing communities where it was much more widespread than apartments so we had a sense of the conditions that would lend itself to rent control pressures.

Rent control is not new and was implemented nationally during World War II. As I often like to do when dealing with contentious and emotional issues, I will go back in time to see what was happening when similar issues were in the public consciousness. Obviously, as someone whose firm and the bulk of my net worth is in rental housing, I have a bias against rent control. I decided to go back and look at some old newspaper articles to highlight some of the arguments for rent control and those against it.

The first excerpt asserts that rent control was implemented to prevent landlords from rent gouging during wartime and that rent control was still necessary as there was still a housing shortage in the face of enhanced industrial expansion as well as military bases coming back into operation in the face of the Korean War and the advent of the cold war with the Soviet Union. 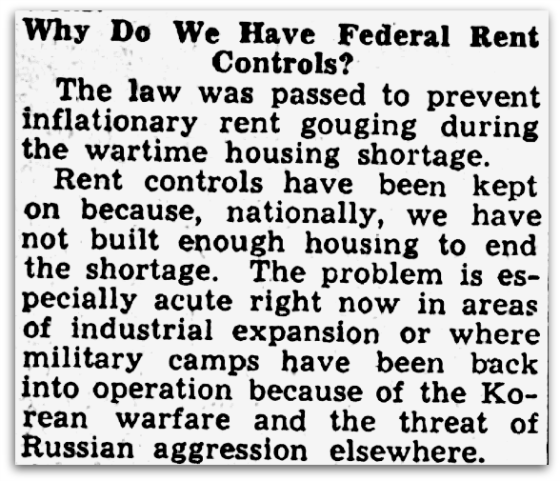 Most economists believe that rent control exacerbates housing shortages because it removes the incentive for investors to create new rental units because they may not be able to earn an acceptable rate of return for the risk borne or that growing government intervention will cut into that return even if it’s acceptable early on. In today’s world of winner take all super firms like Google, Facebook, Apple, and Amazon, some cities are winner take all type cities as well. They attract knowledge-based workers where these firms are located and this inflow of high paid workers can put a lot of pressure on housing costs as these workers make more than the average wage earners in these metropolitan areas and new supply is generally not keeping up with the demand. These urbanized areas such as San Francisco, Seattle, New York, and Los Angeles also tend to be more liberal and have an artsy, bohemian class that help foster these cities’ cultures and uniqueness and who are at risk of being pushed out due to higher housing costs. They also have relatively low ownership rates. For example, the Los Angeles and New York metropolitan areas have homeownership rates of 49.8% versus 64.8% for the United States overall so there’s a larger voting cohort who can immediately benefit from rent control.

It’s not surprising, as the excerpt above shows, that tight housing areas experiencing continued strong demand are at risk of rent control. It’s also not surprising that a vocal (minority?) constituency fought back hard on Amazon’s HQ 2 locating in Queens predicated on substantial subsidies (in the short term) when there was a high probability that Amazon needed to have a growing presence in the area anyways due to its skilled labor pool and its huge economic output. In addition, people did not want to see a large influx of high wage workers whose buying power would most likely escalate housing costs at a more rapid rate than if they had been left to follow its more natural trajectory.

In the following excerpt, the author argued that rent control does not cause housing shortages but it makes the shortage easier to live with for renters. 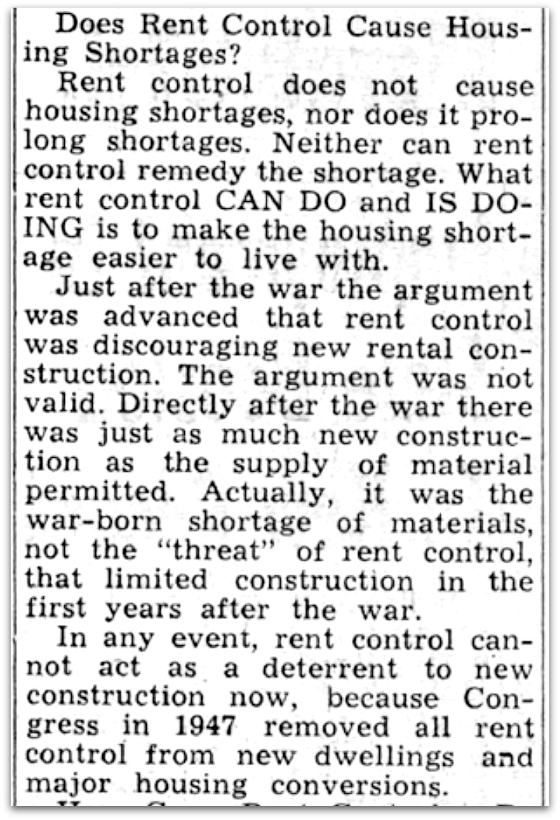 My sense is that a lot of people who have housing want to slow growth down and protect what they have and have some predictability with regard to their future costs. They are seeking housing security and if it comes at the cost of lower long-term growth for the area so be it. As long as they have a secure job and secure housing then the lack of growth can be viewed as a welcome relief as traffic is already problematic and rising costs eat into their ability to save money. The problem occurs when these growth controls impact their job security and wage growth potential and lead to the deterioration of their living standards as landlords invest less in their units because they perceive they are not getting compensated for these expenditures. More on this later.

Here are some interesting statistics regarding rent increases on an absolute dollar and percentage basis for various cities when rent control was in place and comparable statistics for particularly cities that ended rent control. The federal government eventually let each community decide if they wanted to keep some form of rent control. Take notice of the sheer numbers of petitions for rent increases that rent control administrative boards had to review and decide upon.

Now let’s turn to the landlords’ argument against rent control. In this opinion piece, the authors cite the long history of Paris and England and the detrimental effects of rent control there. I got a little chuckle out of the young couples in Paris who wanted to live on their own but couldn’t find a place that bribed janitors of buildings to find out who was seriously ill so they could be prepared to jump on a unit when someone passed away. 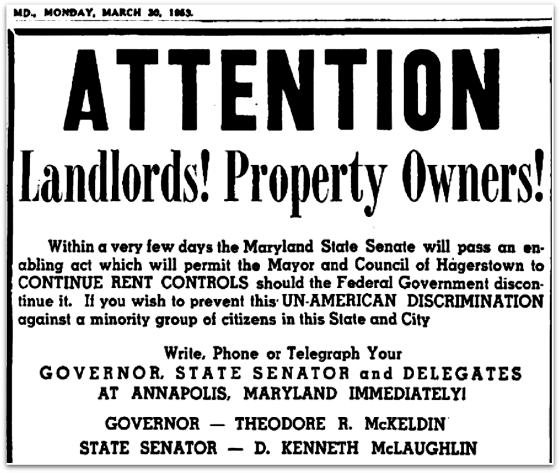 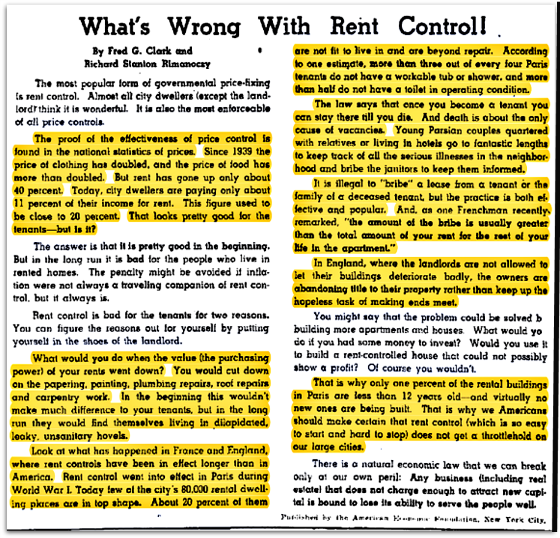 In this next piece, the author tries to be conciliatory and explains why rent control is not in the long term interest of renters. 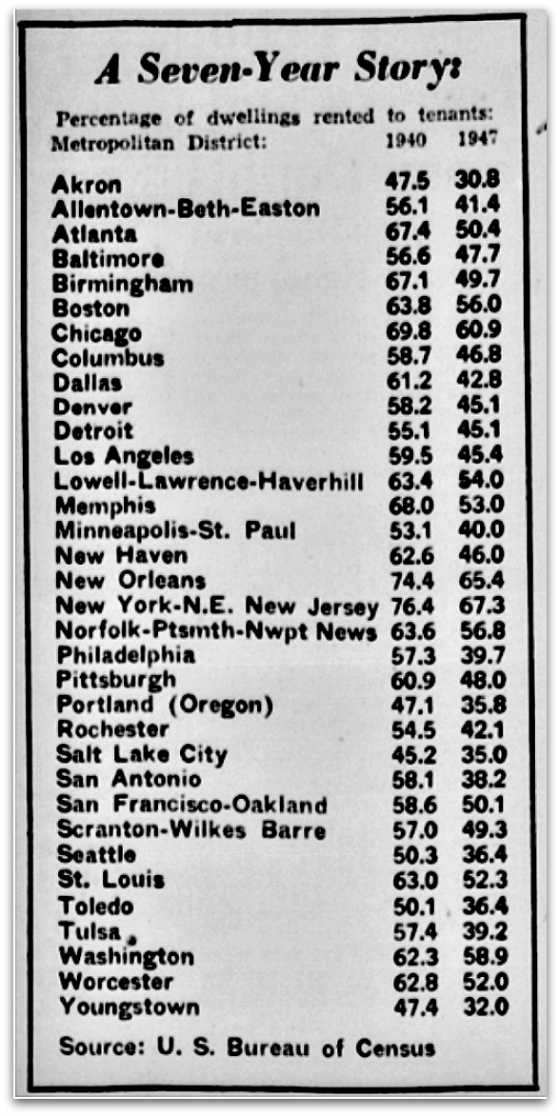 And finally here is an editorial in the Chicago Tribune opposing rent control as unsound economic policy that panders to a large cohort of voters that only ends up hurting them in the end. 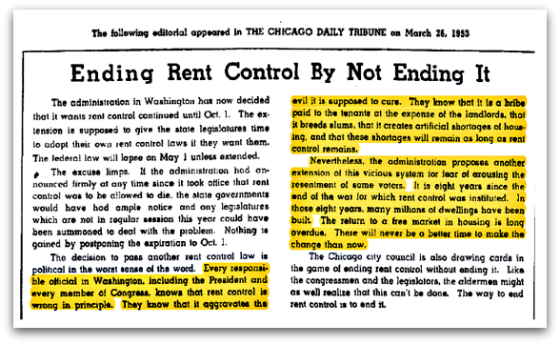 With single-family homes and condos generally being exempt from rent control and most everyone who has housing in these high growth, low supply areas agreeing that infrastructure, traffic, homelessness, and overall quality of life has lessened, politicians are not hurt in the short run implementing rent control, and in some cases are helped by it. We live in an increasingly insecure world and people fear for their housing security and this is a real issue. I think rent control is here to stay and has a high probability of spreading and becoming more restrictive over time.

2 comments on “Rent Control - Then and Now”