The Days Between - The Wisdom of Jerry Garcia 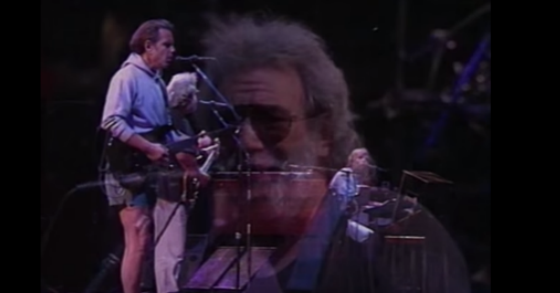 Jerry Garcia was born on August 1st, 1942 and died on August 9th, 1995. The eight days between his birthday and the day of his death are known as the “Days Between”. It also happens to be the name of a very poignant Grateful Dead song, arguably the last masterpiece written by Jerry Garcia and Robert Hunter.

This year it’s particularly personal as Garcia was the same age when he died as I am now, 53. It makes one reflect when you have now lived longer than someone who was nearly a quarter of a century older and who was very influential in your life. He lived a very full life for only being 53 years (and 8 days). He traveled So Many Roads in his 30 years with the Grateful Dead and this took a devastating toll on him physically as you will be able to see in pictures coming up in which he looks more like 73 versus 53.  It’s also quite evident in the video of So Many Roads which took place slightly more than one month before he died. He looks terrible but actually sounds quite good in this moving song.

I have been reading a book by the extraordinary psychologist Abraham Maslow who is famous for deriving his hierarchy of needs to enable human beings to be fully self-actualized. I will write much more about my takeaways in the future but it is clear that Garcia clearly reached peak experiences in that he lived from his authentic, spontaneous center that allowed him to tap into his greatest gifts and potentialities such that they brought him great joy and fulfillment. Unfortunately, the demands on his life and the responsibilities he felt for being a “guru” to countless fans and followers and the economic pressures of keeping the Grateful Dead machine alive led him to do all he could to numb himself from the responsibilities engendered by the reality of life. The end result was that he turned his life over to the addictive forces of very powerful drugs that destroyed him and led to his demise earlier than it should have been.

Maslow said that we should spend as much time studying the peak performers and self-actualized people as we do those who suffer from pathologies because at the end of the day most people want to fully experience what it means to be human. This includes having those “being” experiences of being fully alive and in the moment while also “becoming”, which is forward-looking and goal-oriented and on the path to manifesting our greatest gifts.

That is not to say we can’t learn from people who have created harm to themselves and others and generated their own personal hell so we can avoid such pitfalls in our own lives. It’s just that Maslow believed there was even more ground to be gained by learning from those who have played the game with great intensity and success.

Since this post is more about the wisdom of Jerry Garcia than Abraham Maslow, let’s see what Jerry had to say about this topic. It turns out he and Maslow are pretty well aligned.

“I read somewhere that 77 per cent of all the mentally ill live in poverty. Actually, I’m more intrigued by the 23 per cent who are apparently doing quite well for themselves.”

We all need to avoid self-sabotage so we can at least be in the game. That’s not enough, however, as we also need to play the game with full devotion and dedication at a position for which we are best suited and for which we can create the most value while gaining great psychic rewards as a result.

And what was Jerry’s end goal? 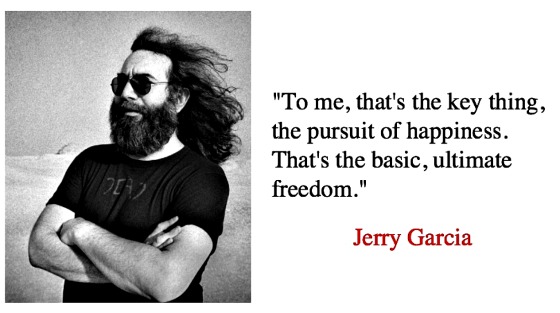 I don’t think he made it there when all is said in done given how he was a slave to his addictions for so many years. He was also realistic about the ups and downs of life as exemplified by the next quote. It’s almost like he’s following the philosophy of Trent Reznor in his song “Hurt” when he says

“I hurt myself today to see if I still feel. I focus on the pain. It’s the only thing that’s real.”

I Don’t Think There’s A Good Excuse For Being Unhappy. I’m Not Particularly Unhappy, But I Know What Pain Is. I think That Life Is Characterized By Pain, Partly. Part Of The Way You Can Tell You’re Alive Is By How Much Pain You’re Experiencing, Or How Little…

He ends up synthesizing the first very optimistic message with the second, somewhat dour one into this.

It’s vitally important to be able to be both realistic and optimistic at the same time and to have an aspirational direction to keep one motivated in order to be growth-oriented while also being able to find the reservoir of strength and courage when one feels like quitting. Never take yourself off the field.

Part of this strength and desire is elicited by having an avocation that can bring great joy and fulfillment that comes from the devotion to one’s craft that in its highest state leads to mastery.

Mastery, however, is never a straight line to ever more growth and accomplishments. There will also be obstacles along the way, including our resistance and frustration. Garcia was brutally honest about how difficult it could be for him to find the motivation to write music and that the notion of inspiration just hitting him out of the blue was much more myth than reality in his experience.

I don’t wake up in the morning and say, ‘Jeez, I feel great today. I think I’ll write a song.’ I mean, anything is more interesting to me than writing a song. It’s like, ‘I think I’d like to write a song… No, I guess I better go feed the cat first.’ You know what I mean? It’s like pulling teeth. I don’t enjoy it a bit.

I don’t think I’ve ever actually written from inspiration, actually had a song just go, ‘Bing!’ I only recall that happening to me twice – once was with ‘Terrapin’ and the other was ‘Wharf Rat.’ I mean, that’s twice in a lifetime of writing!

Finally, these last two are some of my favorite Garcia quotes because there is a lot of overlap with CWS’ investors and CWS’ approach to business. We are not designed to be all things to all people but those who like us seem to really like us. Fortunately, they have been a large enough group of committed investors to help us build a great company and grow nicely for nearly 50 years. In addition, we have found it to be quite beneficial to focus on what we do well and to establish a niche in which we have the capability to add value for those we serve in that niche. 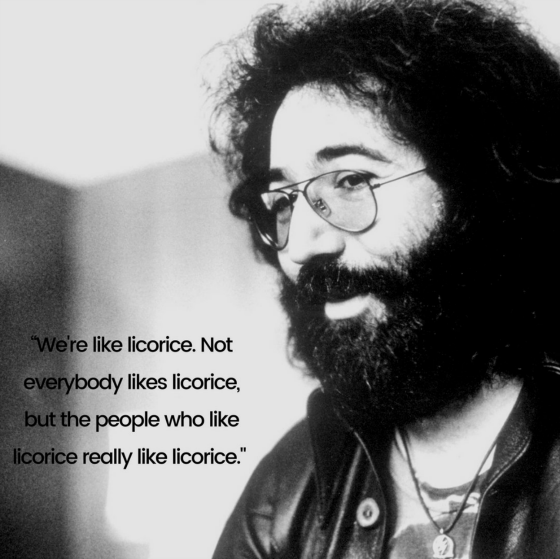 Thank you for all you brought to my life Jerry and I hope you’re having great fun wherever you may be now. Because, as you used to say,

Are you a Jerry Garcia fan? You may also enjoy reading:

Grateful Dead Open Source Business Model One of the Most Successful

What Is Your Story? Creating A Story Where You Are The Hero

Let me know what you think!

4 comments on “The Days Between - The Wisdom of Jerry Garcia”