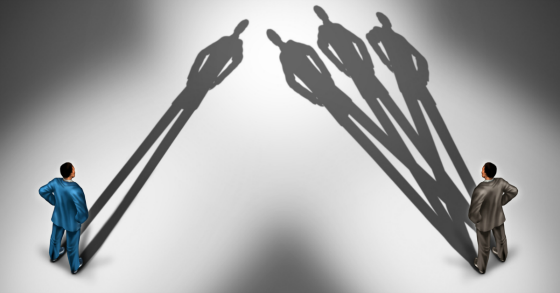 In 1986 Dan Rather was attacked on the streets of New York City by an assailant who kept asking “Kenneth, What’s the frequency?” And if Dan Rather hoped to forget about the incident this became impossible as R.E.M. memorialized it with their huge hit in 1994 of a slightly different title called What’s the Frequency, Kenneth? The song starts off with a high degree of energy and then slows down towards the end. Here’s an interesting aside from guitarist Peter Buck as to why this was the case:

“The truth is, Mike [Mills, bassist] slowed down the pace and we all followed, and then I noticed he looked strange. It turned out he had appendicitis and we had to rush him to the hospital. So we never wound up redoing it.”

I will try to tie the purpose of referencing this song to my overall message by the end of the post. What follows is a concept I’m wrestling with but I’m not quite sure I’m convinced of yet but I’m heading in that direction. Initially, I was skeptical until I heard about a specific piece of data that started to sway me to the other side of the fence. So here we go.

I watched a pretty interesting lecture by a psychologist and researcher that made the case that we do not have oneself, but we are comprised of many selves. He used an extreme example from the New York Times about a boy who, when one of his “selves” was drinking orange juice, he had no negative repercussions. When his other 10 “selves” drank it, however, he would break out in hives and rashes and become very flush.

Of course, most of us do not suffer so overtly from what this boy has had to endure. And yet, if we think about how we react under various circumstances we can probably go back and look at the film and say that was my happy self, angry self, joyful self, fearful self, addicted self, loving self, compassionate self, etc. Now one may say these are all just components of our overall personality and that we are still just one “self”. But is this really the case?

We can shine some light on this by using light as a metaphor (pun intended). When we see something illuminated by light we usually just see the beam of white light. When we put it through a triangular prism, however,  the white light is separated into its component colors. When visible light is separated into its different colors this is known as dispersion.and each color is characteristic of a distinct wave frequency; and different frequencies of light waves will bend varying amounts upon passage through a prism. The end product is usually a rainbow made up of Red, Orange, Yellow, Green, Blue, Indigo, and Violet wavelengths.

Sticking with the metaphor, the visible light we see can be impacted by its component wavelengths and by what our eyes are able to perceive and our brains can process. If you look at the various component wavelengths as different selves then you can see how one can be very different under different circumstances. Whatever wavelength is dominant can have the light, or ourselves, show up differently. And while this isn’t completely surprising since we’re not robots, it does run counter to advice I have often tried to follow. Namely, that we can’t wear two hats because we only have one head. This has been used in the context of people being one way at work and another way at home or in other situations. But if you subscribe to the theory of different selves then this is not really the case. There is not always one conductor or director who is always in charge of the musicians or actors. At various times and under differing circumstances, different lunatics can be running the asylum.

So why am I starting to shift to the multiple selves model? The speaker talked about alcoholics and cited a statistic that said of all the treatment methods available to them, the one with the lowest rate of success was psychotherapy with only 2.7% recovering. Many people in the audience were in that field so it wasn’t something they wanted to hear. The question is why is it such an utter failure in helping someone to stop drinking (and probably other addictions as well)? It was his answer that was a big aha moment for me. In hindsight, it seems logical and obvious but something I never thought about. He said psychotherapy rarely works for alcoholics because the alcoholic self almost never shows up for therapy.

This falls into the category of one of my favorite Schopenhauer quotes in which he says the following:

From my perspective, it seems like a logical course of action for someone who is an alcoholic is to go to therapy (as well as AA) but I never thought that the alcoholic self-was not the one showing up for therapy. So now I am thinking differently about what everyone else sees.

And this brings me to investing. It’s one thing to study finance, accounting, get an MBA, become a CFA, and read the writings of some of the world’s greatest investors and books and articles about them. It’s quite another to make the right decision in the moment when one has imperfect information, powerful incentives such as one’s compensation being positively impacted by making the move and constraints such as fear for one’s job if the results don’t pan out or potential harm for speaking up against the consensus.

Like the alcoholic self that is triggered to drink by wanting to avoid the demands and responsibilities that life calls for being very different than the person sitting across from a therapist in a protected and somewhat intellectual environment, investors are human beings that have to contend with fear and greed in the moment, particularly under extreme circumstances. This is heightened even more when invested in liquid securities like stocks and bonds for which the prices can change by the minute (or less) and sometimes violently.

Imagine being invested in the Turkish lira either directly or by owning Turkish assets and contending with the following. 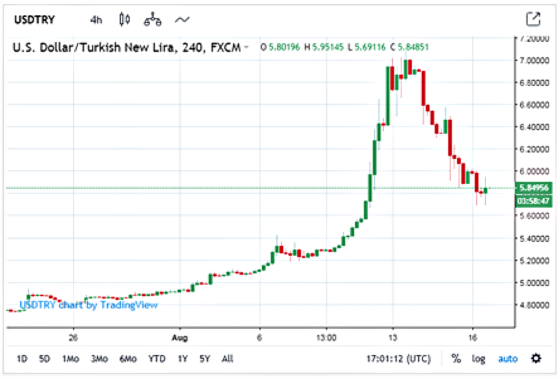 Virtually overnight the currency depreciated approximately 35%. It reminds me of what the farmer said when his horse dropped dead: “It never did that before.” There is no substitute for experience and once you have the experience it’s vitally important to not confuse memory with experience.

We went through a lot of challenges during the Great Recession in terms of working with lenders and investors to make sure we could get through the downturn intact and come out the other side well positioned to go on offense to take advantage of the opportunities that would materialize. Looking back eight to 10 years later, it’s easy to minimize what we went through by converting the experience into drab and impersonal statistics such as we extended x number of loans, we paid down x number of loans, we had capital infusions for x properties. And while this is true, it’s somewhat akin to the alcoholic being in therapy. There is no in the moment recollection of the angst, hours of strategizing, the resource allocation decisions we made to handle these negotiations, investor communications, capital plans formulated and implemented, as well as making sure our operational teams knew the expectations from our lenders and investors.

There were many sleepless nights and a lot of pressure on us to make it through with minimal damage. We can’t let the prosperity that followed and the time that has gone by to let us forget what we truly had to do to get here. We will inevitably be faced with trying circumstances in the future so it will be vital for us to not lose the value of this well-earned experience.

With this in mind, I have increasingly found that before entering into something that may be a bit more challenging or novel than usual that visualizing how I think things may play out has been a very helpful and useful tool in terms of better preparing me for these situations. Ultimately I want to bring my most effective self to the encounter and by visualizing it ahead of time I can do my best to lessen the chance of my lesser selves showing up and hijacking the situation and leading to suboptimal outcomes.

I’m sorry that Dan Rather had to go through what I can only imagine was a very scary and traumatic experience. On the other hand, now that I have a newfound appreciation for the existence of multiple services, perhaps his assailant wasn’t as far gone as one might initially think. In some ways, his question was quite important. He needed to know from Kenneth what the frequency was. And perhaps if he got the answer he could have adjusted his state of mind to switch to another frequency.

I hope you appreciated my offbeat, open-minded self-being in charge this week. The following video show’s that Dan Rather may also have an offbeat sense of humor.