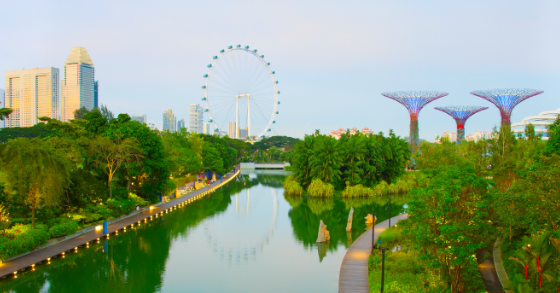 Warren Buffett has said that people should read 500 pages a day if they want to compound knowledge at a very high rate. Along the same lines, Bill Gates reads at least one book a week to help satisfy his immense curiosity. Jeff Bezos is also an avid reader and learner. And they don’t restrict their reading, learning, and discovery process to one discipline. It is applied to many different subjects and they put themselves in new settings to help them generate new ideas and see things from a different perspective.  This characteristic is one possessed by an overwhelmingly high percentage of successful people. Lee Kuan Yew was no different.

Last week I introduced my study of the father of Singapore on a more general basis. This week I will focus on his insatiable curiosity and attention to detail and how he applied these traits so effectively. One of the most tangible ways this shows up for visitors to Singapore is how green the city is.

Lee was definitely one who liked to do on the ground research. Lee sought to put himself in a position to learn from anything and anyone. Like last week, I will quote from Up Close With Lee Kuan Yew: Insights from colleagues & friends. One of his secretaries said that while he was a very strong-willed man with an ego, he was also very humble when it came to learning.

“We see his humility; he sought to learn from everyone, from commanding world and business leaders to fruit sellers in a market in Taiwan to the residents of Tanjong Pagar.”

“He was with his wife. He was curious, always looking around, paying a lot of attention to his surroundings. This was my first impression of him. He remained a keen observer throughout the years. He observed everything.”

I have found that when I travel or go to new places that I am much more engaged and focused when I feel like I’m on a mission and journey of discovery. Mine is usually through the prism of gaining new insights that can help me make better decisions to take advantage of opportunities and avoid risks. Lee was similar in that he looked at everything through the prism of what can I learn that will help Singapore’s development. From one of his former assistants:

“Everything he did was with a view to Singapore’s development. He saw things with a very pragmatic eye and he learnt a lot from culture and architecture, and from how people live. He approached everything with a primary view to understanding. And from that understanding, he would always ask, how can it be relevant? Can it be of use? His appreciation of art, for example, would probably not be for art’s sake — it would be for understanding the bigger picture. I am not saying that he didn’t like art; I can’t affirm this. But I could see that what he observed and studied was driven deeply by his passion for Singapore. Much has been said about his vision for a green Singapore and Gardens By The Bay. Did this stem from an innate love of plants? I don’t know. Mrs. Lee definitely loved plants. But Mr. Lee clearly saw it as a strategic way of improving the lives of Singaporeans. It’s all part of a vision that he never wavered from.”

He was obviously a very focused and mindful person. I have noticed that with very successful people I have seen in business in life. They immerse themselves first hand in situations where they want to access information without a filter. They also have a keen eye for detail. Lee was very focused when engaged with people. Not surprisingly, he was not one for small talk. He was almost always all business.

“With Mr. Lee, there was no room for superficiality when dealing with important matters. I saw firsthand how he worked hard to understand deeply the issues that were new to him, so that he could discern what they meant for Singapore and how Singapore could best deal with them. To understand any topic deeply, one simply had to be single-minded, and work hard to read, listen and learn.”

Singapore is known as the Garden City and it really shows. In fact, according to research done by M.I.T., Singapore is the greenest city in the world with almost 30% of its area covered by greenery.  Of course, this didn’t happen overnight. Lee was obsessed with Singapore becoming a very green city. It would not only make it a more beautiful and softer looking place, but he was also far ahead of his time in having a deep environmental awareness and concern. The following is from his Principal Private Secretary that served in that position between 1978 and 1981.

“From the start, Mr. Lee was very clear in his mind that Singapore would not be a concrete jungle. His passion to create a garden city where there were plenty of trees and flowering plants was infectious. I remember his questioning again and again on how to get greenery to grow even under the flyovers that were being built all over the island. He was not satisfied to just outline the big picture on issues and always insisted on getting into the details of what he considered critical. Thus when he launched the National Productivity Movement in 1981, he looked at it from all angles — schools, workers and businesses.”

Moses Lee, his Principal Private Secretary from 1987 to 1990, was equally amazed by his foresight even in the face of overwhelming challenges in terms of the country’s ability to survive as an independent city-state.

Moses Lee goes on to show how Lee put the resources behind initiatives he thought were very important and the greening of Singapore was one of those.

“Today, we use gratings but we did not have them then. He said he was prepared to spend $2,000 per tree to make sure each tree could grow and breathe properly. (I distinctly remember that figure, $2,000, because at that time, my salary was just a little over $1,000!) That showed how determined he was.”

Bill Gates has said something to the effect that it is easy to be a visionary but it’s hard to be a CEO. And yet organizations need to generate a vision to point to where the company should be going and then be able to do the hard work and nitty-gritty of executing on the plan to get there. Lee was one of those rare individuals who was a brilliant strategic thinker and could also be incredibly effective in managing the execution of his vision.

This is what Moses Lee had to say about Lee’s meticulous planning.

“On my first day of work on 2 January 1987, he called me into his room in the afternoon. He sat me down, across from him at his desk, and proceeded to tell me in one hour what he planned to do for the next three years! He had already anticipated that he was going to retire and knew all the major issues he needed to address before then. Now, I have worked in so many places — in finance, national development, education — and nobody has ever briefed me their plans for the next three months! True to his character, he always planned far ahead, managed the processes tightly and paid attention to the smallest details to shape the outcome that he wanted. Nothing was left to chance.”

Moses Lee goes on to describe how far-sighted he was and how he could put his vision into action which is quite a unique combination of skills.

“Mr. Lee was unique as a visionary who could foresee issues and trends decades and even a generation ahead, and yet was solidly grounded with a pragmatism that enabled him to transform ideas and ideals into reality. There are many great thinkers and visionaries in our time, but very few are also able to implement and build equally well. Perhaps it was his ability to pay attention to the smallest details that ensured that Singapore worked and at the highest standards possible.”

I will end with a quote from Leo Lip, Lee’s Principal Private Secretary between 2000-2002 in which he discusses how broad his thinking was and how penetrating his analysis could be to separate the signal from the noise.

“He did not have just a deep sense of history, or a broad and long-term perspective of issues, but also a perceptiveness about how today’s developments would shape the future. He cut through the noise and zeroed in on the key issues that mattered. He saw through fads that did not last, and focused on the deep dynamics and trends that would shape the long-term development of societies and nations.”

Stay tuned for next week’s blog as I will have more to share about Lee Kuan Yew.

One comment on “Singapore: It Wasn't Easy Becoming Green”