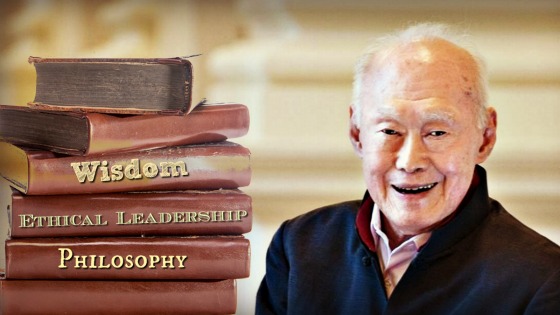 This is my final installment about Lee Kuan Yew. There is still a lot I haven’t touched upon but three weeks have been a sufficient amount of time to devote to some of the most important lessons learned from Lee.

One of CWS’ core values is “Ethical dealings are paramount.” It’s not only the right way to act but it’s also good business. Trust is an invaluable currency and only by putting our investors first and always striving to do what is right goes a long way to cementing very powerful relationships through thick and thin and has helped us prosper over nearly 50  years.

This belief in the importance of ethical behavior was one of the cornerstones of Lee Kuan Yew’s philosophy in terms of catalyzing the development of Singapore. He has been proven right as its highly ethical government is one of the keys to its success. It has lasted to this day as it ranks #6 on the Corruption Perception Index (It is the sixth least corrupt government). Corruption is virtually non-existent and this helps the economy allocate resources much more efficiently and allows for investors and business people to have a greater certainty to take a risk with their capital and time. They are willing to do so because they know at the end of the day that the best ideas and service and the execution of those ideas and services should win out and not be a function of who pays off the people in power. This allows for the cream to rise to the top and allow for living standards to rise as resources can be allocated to their highest and best use.

At the heart of everything Lee did was putting Singapore first and never taking its survival for granted. To do this he knew he had to attract the best and the brightest into the government and to invest and develop Singapore.  Lee was intensely focused on ensuring that he had the right people in the most important positions. Lee said the following.

“You either have the talent or you do not. My job is to find out, quickly, whether a person responsible for the fate of over 2 million Singaporeans has got it in him or her. If he or she does not, I am wasting my time…”

What did Lee believe was required to make a country like Singapore great?

The following characteristics represent a good summary of the keys to a country’s development and progress according to Lee.

Lee believed that leaders must be open with their citizens about what they are trying to achieve, why it is important and beneficial, and prepare them for any sacrifices that may be necessary to bring them to fruition. Lee believed that sacrifice is inextricably tied to economic growth. He said the following.

“Citizens must be prepared to support the leaders they voted for by making the effort and accepting the discipline and sacrifices necessary to achieve agreed objectives. The less the effort and sacrifice people are prepared for, the less the economic growth. The looser the social discipline and the more diffuse the consensus, the weaker will be the performance and the lower the productivity.”

As previously mentioned, Lee believed that ethical leadership was a vital competitive advantage because it is relatively rare and yet so important to attract the best people and investor capital to support a country’s growth. This is how Lee framed the importance of ethical leadership.

“All countries can harness information technology and air transportation and join the global trading community in goods and services. It helps to close the gap between advantaged and disadvantaged countries. But one “X” factor remains a key differentiator, especially for developing countries: that is ethical leadership…A clean, efficient, rational, and predictable government is a competitive advantage.”

As with most important issues, Lee was far ahead of his time in seeing what trends would be very powerful and what the impact of them would be. For example, he knew that there was a great risk of science and technology turning into Frankenstein’s monster and that these must be developed and harnessed without losing touch with people’s core, ethical values.

“People must stay abreast of the state-of-the-art technology, but must never lose their core values. Science and technology are decisive in determining future progress. But they should not be allowed to break up families that have to imbue children with a strong sense of social responsibility and the conscience to distinguish between right and wrong.”

He also was well aware that over time Singapore must open up more but he was very cognizant of the risks of doing so and the most important way to minimize problems associated with this was to adhere to the country’s strong values.

“The process of opening up may make our society more unruly. The gravest challenge will be to protect the values we cherish…If you want to thrive in the modern world, then you must not be afraid.”

As Singapore has become more advanced and better educated Lee knew that growth and improved living standards would only result if its human capital was delivering goods and services demanded by consumers and businesses. This has required that Singapore has a workforce that is knowledge and innovation-oriented, even in its dominant manufacturing sector. The following chart shows how manufacturing output, while still the largest, has been receding somewhat, while Finance and Insurance have made up for what has been lost by manufacturing. 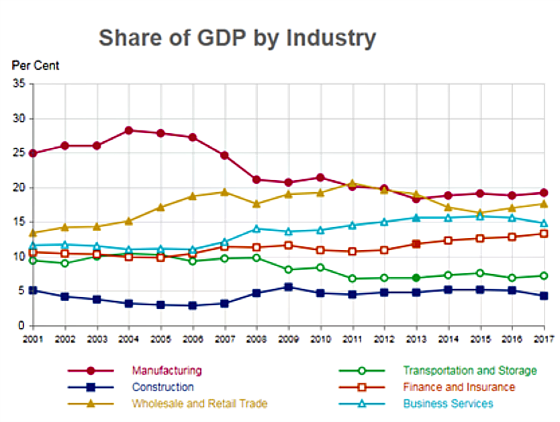 Lee determined that the following characteristics were necessary for the workforce of the 21st century to be successful to earn high returns for their labor and to improve living standards.

People must be self-directed, disciplined, and innovation-oriented to add value in a highly competitive, global, knowledge-based economy. This is a great list for parents to study to help cultivate these characteristics in their children as well as for any individual that is highly motivated to compete and succeed in our fast-paced, rapidly changing economy.

I very much appreciated all that Lee has taught me about leadership and expecting the best of oneself and others. Singapore is truly a first world city-state and an economic miracle. It has a very high quality of life, one of the world’s largest sovereign wealth funds, a very well educated, multicultural population, and a great future. I encourage people to visit there and study the life of Lee Kuan Yew.

In case you missed my prior blogs about Lee Kuan Yew, I encourage you to read:

The Discipline of Lee Kuan Yew – Transforming Wealth Into Well Being

One comment on “Ethical Leadership & Human Capital in Singapore”