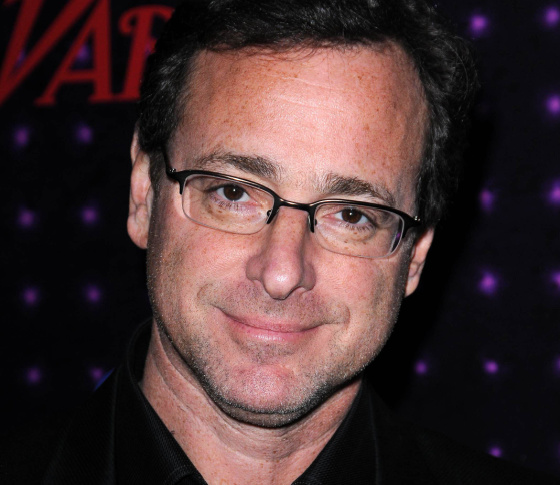 For whatever reason, I was really struggling with what to write this week. Yes, I admit that this does happen.  I then started reflecting on the previous week and one of the attention-grabbing events and there was one that particularly impacted my kids, especially my daughter. This was the sudden passing of actor and comedian Bob Saget at age 65. They, along with millions of others, grew up watching Full House and it became one of the seminal shows of their childhood. It ran for nearly eight years and there were 192 episodes produced. It is still popular in syndication, including internationally.

My connection to Bob Saget was more related to his hosting of America’s Funniest Home Videos which I found to be very entertaining. He was so quick-witted and he had such an engaging and warm personality. He seemed like such a likable guy. And when I found out that his stand-up comedy routine couldn’t have been more distant from his wholesome image from his television personality I liked him even more!.

Bob Saget’s stand-up comedy was incredibly dirty and foul-mouthed.  And that’s what made him even more interesting to me as I love unpredictable people with depth and diverse experiences as these make them far more worldly, in tune with others, and so much more enjoyable to be with. Everyone is filled with contradictions and conflicting energies. And while we want people in our lives to always be consistent and, dare I say, flawless, that’s just not reality. Life can be very messy because we are fallible human beings with fears, insecurities, compulsions, blind spots, weaknesses, etc. That’s just the way it is and we can’t wish these away because it’s human nature. Hopefully, these don’t cause us or others harm, and, assuming they don’t, if you adopt a mindset of curiosity and do your best to find them fascinating, interesting, and even entertaining then your life should be that much more enjoyable.

I didn’t realize how impactful Bob Saget was until I read some of the tributes to him. One of these came from musician John Mayer. I periodically Google John Mayer to read about what he’s up to. It’s often tabloid fodder but I generally skip over those because he does so many other things and has such depth that I find it very interesting to follow what he’s up to. I came to learn that he and Saget were great friends and John Mayer was absolutely devastated and heartbroken by his passing. His death was a huge loss for Mayer, his other friends, and of course his family. It also had a big impact on millions of others as well as I alluded to earlier. My daughter texted me a link to an article that she said brought her to tears while reading it.

It was a recap of a video John Mayer did on Instagram Live with comedian Jeff Ross. They had gone to LAX to pick up Saget’s Prius which he had left there prior to departing for his fateful trip to Florida.

I came to learn that Saget lived a very full and meaningful life from which we can all learn. He left it all out on the field of life. Bob Saget told everyone important to him that he loved them and he was tremendously devoted to his family and friends. Everyone close to him knew how he felt about them. This is what John Mayer had to say and something that almost everyone would love to have said about them and a great model for how to be with others.

“I’ve never known a human being on this earth who could give that much love, individually and completely, to that many people in a way that made each person feel like he was a main character in their life and they were a main character in his life,” said the singer, who was behind the wheel.

“Everyone is so aware how universal Bob’s love for people was,” he continued, before tearing up. “The thing that just keeps coming up when people say they’re sorry is just, ‘I loved that guy.’ “

Jeff Ross talked about how he would lean on Saget to help him navigate through life and how his passing was going to leave a void for him that probably no one else could fill. Saget was always there for others and respected his fans and the time and money they spent to see him perform. He committed himself to giving them his best every time he performed and to sign all of their autograph requests because he knew how impactful that could be for people.

I like to reflect on events like Saget’s passing and see how I can go from the micro to the macro to derive universal life lessons. As we get older our impermanence becomes more front and center, so the race against time becomes increasingly important to run effectively. Meaning, significance, legacy, and contribution are filters through which self-reflective human beings make decisions as to how they spend their time and with whom, especially as they get older.

This may sound morbid but I sometimes look and see who passed away at the age I’m going to be on my next birthday to keep the tension of morbidity being potentially closer than the actuarial tables would predict and how this can catalyze a greater sense of urgency to live a more full life. I’m turning 57 in June and here are some famous people who passed away at that age.

And since I’m still 56, I thought I would throw in a few people from this age as well.

The people above created so much in such a relatively short period of time (Steve Jobs particularly comes to mind). On the other hand, imagine what more they could have contributed to the world had they had at least average longevity?

In Judaism, one of the core values is kindness to strangers based on the experience of being strangers in the land of Egypt and knowing how it felt to be outcasts. As I reflect on this and how Bob Saget lived his life it occurred to me that we are just visitors here and this is really the case for every interaction. As a result, if you think about when you’re a guest of someone’s or, conversely, hosting them, most of us would agree that we try to be most respectful, kind, and empathetic when we’re a guest of someone’s and when we’re hosting them. We want to be respectful as guests and provide a welcoming, warm experience if we’re hosts.

I don’t know what happens after passing through this life but if I can develop or enhance a guest/host mindset then this will reinforce for me the opportunity to leave everything a little better than I found it. I can’t take anything with me, but what I can leave behind is a legacy. We are all just borrowers of everything so I hope the gifts I have been given and utilized have created much more than the inputs I have used. As such, I hope I can pass on to the next borrowers the fruits of my labor and sets of behaviors that others may find helpful and valuable for them to lead lives of greater satisfaction and meaning.  I hope this will include hard work, charitable significance, humor, thought leadership, well-adjusted and contributing children, wealth creation, health, joy, and an overall commitment to leaving the world a little bit better than I found it.

I will wrap up with words from John Mayer and another music icon, Bono. This is what John Mayer said in honor of Saget’s birthday in 2018: 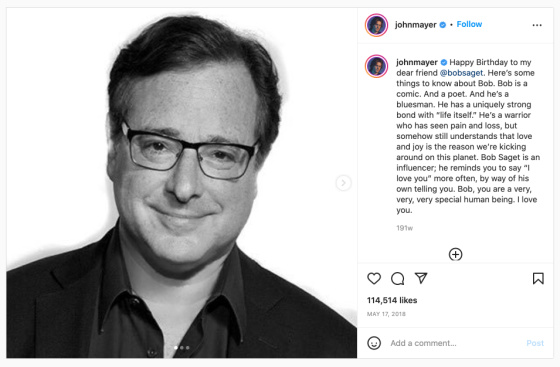 “Happy Birthday to my dear friend @bobsaget. Here’s some things to know about Bob. Bob is a comic. And a poet. And he’s a bluesman. He has a uniquely strong bond with “life itself.” He’s a warrior who has seen pain and loss, but somehow still understands that love and joy is the reason we’re kicking around on this planet. Bob Saget is an influencer; he reminds you to say “I love you” more often, by way of his own telling you. Bob, you are a very, very, very special human being. I love you.”

And after reading this and you’re feeling a little maudlin and morose, and you just want to give the middle finger to mortality, then I suggest you follow Bono’s advice.

“I mean the thing that experience has taught me, above all else, is the primacy of fun and frolics and devilment and mischief and joy as a defiant act against our mortality, and that brings us back to rock ‘n’ roll. That’s where U2 came from.”

2 comments on “R.I.P. Bob Saget and Developing a Guest/Host Mindset”