Powerful Lessons from Tennis in the Desert 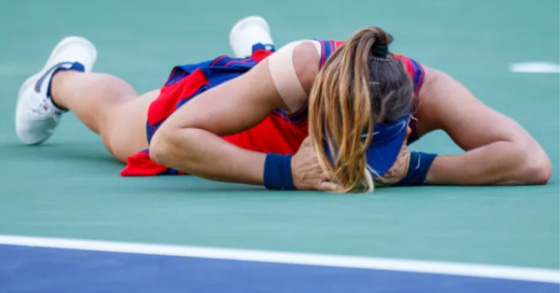 I had the incredible pleasure of attending the BNP Paribas tennis tournament in Indian Wells, California. It is a beautiful facility and was purchased by Larry Ellison in 2009 and he has spared no expense to have it live up to the vision of it being a tennis paradise. His commitment to creating the best experience in the most beautiful environment shows his incredible focus and attention to detail making him so successful in so many areas of his life. As someone involved in real estate, there is so much to learn from a fanatic like Ellison when managing properties that we own and having a relentless focus on the customer experience. 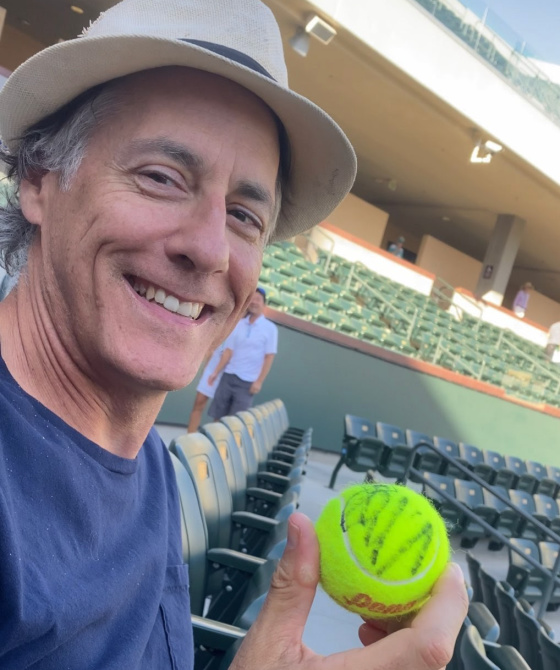 Now, back to tennis,

I watch many tennis videos to learn techniques and ways to improve my shots, particularly related to my backhand these days. I also try to study some of the great players and how they can overcome deficits by staying mentally strong in the face of daunting circumstances. My goal is to put what I learn into practice. I have had some level of success, but not to the degree to which I would really like. I still find myself getting frustrated and sinking into a bit of a negative mental and physical feedback loop that perpetuates the negativity versus cutting it off at the pass when it starts to materialize. Of course, this never serves my game (pun intended).

The matches I attended included semi-finals and finals for doubles and singles for both men and women. Watching doubles was very interesting because I can be very internally competitive and I can express a level of frustration particularly when I’m not playing well. And while I wish that I would only get frustrated with myself, there are times when it can also be directed at my partner, even if it’s only body language or a facial expression when he or she is not playing well. As a result, it was really helpful to see these players interacting and how, almost after every point, they would show encouragement by touching hands or saying something uplifting, especially after a lost point that was caused by an unforced error. To witness and experience that in person is so very different than to see it on video. In the stadium, I can feel the weight of the crowd watching and reacting and clearly I can put myself in the position of those players when they make a mistake and how difficult it must be to stay positive and to cheer their partner up. And yet, in order to reach that level of accomplishment, both players must tame their emotions and have a positivity bias. This trait, habit, and consistent application are critical success factors and must be developed and cultivated if long-term, consistent success is the desired outcome versus it being fleeting.

It’s vital to stay in the moment and not get subsumed by the outcome of the previous moments so that they don’t negatively impact the next ones. It’s critical to do one’s best to rise up and help bring up one’s partner. This is true not just on the tennis court but especially off of it as well. If we can surround ourselves with people that can elevate us who are cheerful and fun to be around and don’t drag us down in terms of being negative or sapping our energy and we can aspire to be the same, then the partnerships and relationships we have in life can be so additive and help us rise up the ladder of our own individual tournaments. I think Warren Buffett says it so well. 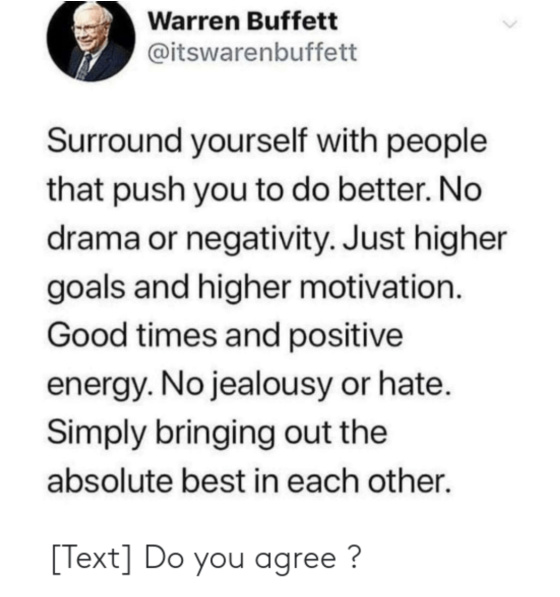 The real highlight of the tournament was seeing the women’s final. It was the former number one Victoria Azarenka, 32, versus 23-year-old Paula Badosa from Spain who grew up idolizing Azarenka. It went the full three sets, two of which required tiebreakers, and took about three hours and five minutes to complete. It is now considered the match of the year for women’s tennis. It was that good. The first set alone took approximately one hour and 19 minutes.  The match was extraordinary to watch. It was a war of attrition that took place in 90-degree heat and showed the grit, determination, competitiveness, and conditioning of the two players. Azarenka was down 4-0 in the first set tiebreaker and came back to bring it to 5-5 only to lose 7-5. For most people, this would be a devastating loss to have played for so long and so hard and to come up short. And yet, for Azarenka, rather than letting it get her down, it elevated her. She fed off of the challenge. She was energized by the mountain she had to climb and she was not going to let anything get in the way of her giving it her all and making Badosa play her top game. She was able to come out and win that second set very handily 6-2 which made the match come down to a deciding third set. I thought she would carry that momentum over and win it somewhat handily. Boy was I wrong.

Badosa came out with fierce determination and she was incredibly competitive. It was a real battle and she ended up winning the third set in another tiebreaker. It was her first major title and particularly gratifying as she suffered from depression, anxiety, and an eating disorder when she was younger and early in her career after getting injured and not playing to her expectations and to what others expected as well. In her post-match press conference, she said the following which is such great advice when it comes to dealing with life’s disappointments and frustrations.

'In the final of the third set,' Badosa said, 'I started to focus on what to do every point, every ball, and not think (about) anything else. I think that was quite important because it was a final, and I really wanted to win it so bad.'Click To Tweet

It reinforces the power of having incredible determination and force of will while not letting the past drag one down and not looking beyond the current point. Try to stay fully present in the moment. 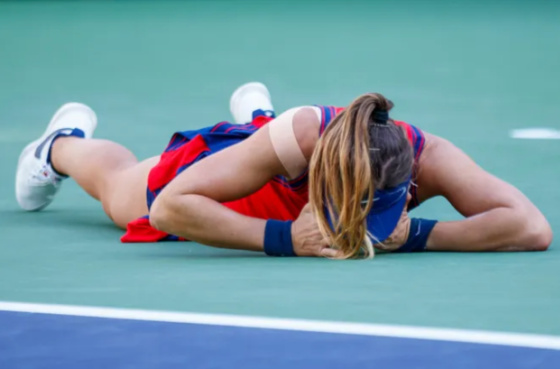 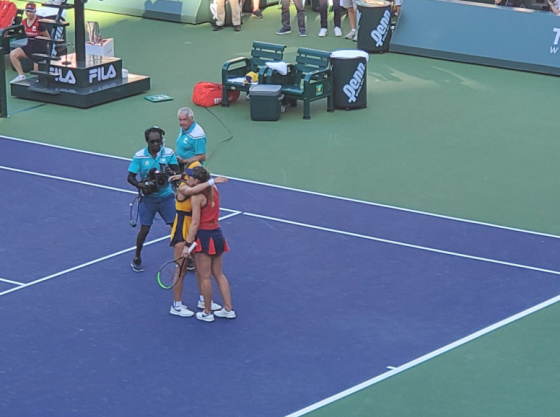 The men’s final was up next and there were some great lessons from that match as well. The winner,  Cameron Norrie from Great Britain, had been in five finals already this year but lost every one of them until this tournament. He was playing Nikoloz Basilashvili, a ferocious hitter from Georgia who, if he’s on his game, is so hard to beat because his power is overwhelming if it is deployed consistently (minimal errors). His situation was the opposite of Norrie in that he had won every tournament in which he made the finals, albeit over his career versus just this year, but ended up losing this one.

I was listening to match commentary via headphones provided to attendees and Jim Courier, the color commentator, talked about how he was such a volatile player and that if you graphed his performance it would look like an EKG output in that it would have very high peaks and very low valleys and great volatility. When he’s at his peak he is virtually unbeatable because no one hits with such consistent power as he does. For example, his backhand during that final match averaged over 90 miles an hour, which is unheard of. The challenge he has, however, is that he plays that way all of the time and it’s very difficult to remain consistent with that level of power and physical exertion. Norrie, on the other hand, is a very smart player who plays great defense. He’s able to get the ball back over and over again despite the power that the Georgian used on him. He just had to stay in the game and recognize that when his opponent was hot there was no way he was going to win, but that over time if he kept making every effort to keep the ball in play then his opponent would start making mistakes. And that’s exactly what happened. He is also a good enough player to take advantage of openings so that he could return the ball with winning shots.

Norrie never overreacted. He was confident in his abilities and game plan and knew that consistent application of it would start to pay dividends for him via mistakes made by his opponent and openings for him to pounce as long as he didn’t overreact to each point.

Observing Norrie play, as well as the two women, got me thinking about how I could apply what I was seeing and processing to business. Our goal at CWS is to always be on the playing field. This requires being able to handle adversity by building a resilient portfolio and talented team with a growth mindset combined with tremendous grit and determination so that we can weather any storm. If we can build and sustain this then when the tables turn we can remain on the field and go from defense to offense at a time when our competitors are dealing with problems from committing errors of optimism which led to aggressive use of leverage and buying lesser quality real estate believing the good times would continue indefinitely. The consequence of this defense-first strategy is that we may get the home runs that our more aggressive competitors may get during the upper part of the cycle, but over a full cycle and over the long-term we think it should allow us to remain on the field and enable us to take advantage of opportunities that materialize during economic and financial dislocations.

I was also able to apply some of these lessons I’ve learned from tennis to better performance on the court as well as off of the court by not immediately reacting to frustrating and disappointing situations. For example, last week I was on a flight home after meetings on the East Coast and a woman next to me on the plane was half asleep and she knocked over her red, Gatorade-type drink under me and it spilled on the seat of my pants. I was drifting off to sleep myself and I started to feel a cool liquid flowing under me and I opened my eyes and saw her plastic cup tipped over and spilling on my seat. Rather than reacting and getting upset, I took it as a point that I had lost or had an unforced error and I just regrouped. I accepted that it was an accident and that things happen out of my control unintentionally. I have tried to consciously take that approach when other frustrations occur. I just take a deep breath, treating it like a point I just lost and that I need to regroup for the next one. I need to get back in the game and always stay in the game. Never lose my head and always hang onto my respect and honor and everything will be alright in the end somehow.

One comment on “Powerful Lessons from Tennis in the Desert”