Point Counterpoint - My Reaction to an Investors Memo 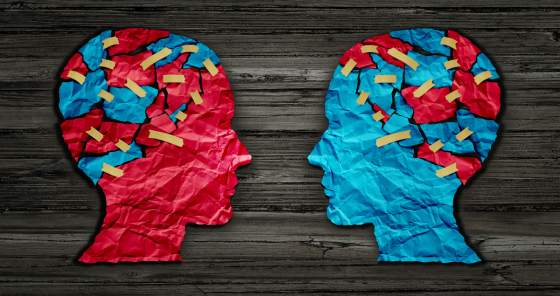 I received a memo from a very successful real estate developer and investor whose expertise is industrial properties. He produced a thoughtful memo as to why now is the time to take a pause from investing for fear that investor euphoria is elevated and there are unsustainable macro trends that pose a great risk to investors. I thought I would lay out his key points and share my thoughts as to why I think he may be too pessimistic. Admittedly I am biased in that we tend to have an inclination towards growth and believe that apartments still offer a compelling risk-reward relationship. His memo gave me the opportunity to think about what might go wrong and revisit some of my long-held assumptions that have supported the bullish case for apartments.

The following are his concerns and my responses to them.

Concern: Proformas are priced to perfection. There is very little room for error as every key assumption is too optimistic.

Gary: Proformas are only aggressive if the return requirements are unrealistic.We believe that apartments have a reasonable probability of generating IRRs of 10% to 12% utilizing leverage. While this is down from earlier in the cycle, we still think this is competitive given where interest rates are, the yields that can be generated, and the modest returns expected from the stock market. The risk is that if investors are disappointed they may pressure their sponsors to sell causing prices to fall. If one believes in the positive future fundamentals, however, then this can be an opportunity.

Concern: Industrial REITs have risen by 50% over the past year while the underlying real estate is up 7%.

Gary: There has been a definite chasing of yield in publicly traded securities which speaks to the securities being overvalued versus the underlying real estate.

Concern: Interest rates are at all-time lows with over $16 trillion of government bonds trading with negative yields.

Gary: Interest rates have been going down since 1981 so the fact that we are at all-time lows shouldn’t be a big surprise. Obviously, negative interest rates are but the aging of the developing world, the greater demand for safe assets and the near global depression that took place between 2007 and 2009 have all contributed to lower interest rates. I don’t see these trends changing materially. I recommend people read Fed Governor Lael Brainard’s speech she recently gave regarding the New Normal. She makes a compelling case as to why rates may stay low for a long time.

There is no question that the bond market rally has been quite strong and probably overdone if a bullish sentiment is an indication as this chart from www.sentimentrader.com shows. 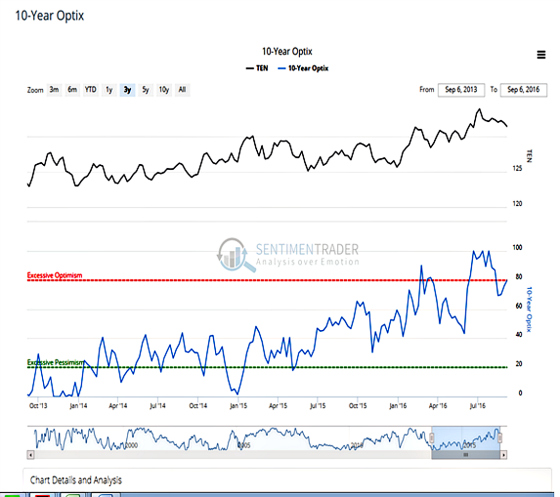 The blue line hovering against the red line shows excessive optimism among investors in U.S. 10-year Treasuries. This is starting to reverse as rates have spiked over the last month or so. My sense is that this is more of a function of unwinding excessive bullishness than a secular change. I could be wrong of course and Jeffrey Gundlach has suggested that the world has changed and we can’t look to central banks for support anymore.

Gary: This makes sense given that interest rates are low, there is positive leverage, and the asset class is leverageable. There is also a reasonable spread between cap rates and 10-year Treasury yields which in theory should compensate investors to some degree for the risk that interest rates move higher.

Concern: Stocks are at all or near time highs.

Gary: This doesn’t necessarily mean that real estate is overvalued. In fact, if the stock market is a good gauge of future economic activity, then this could be bullish for real estate. Concern about stock market highs implies an economic peak or bubble, which may or may not be true.

Concern: Institutional investors are increasing their real estate allocation and stretching for yield and overlooking risk in order to get funds invested in the sector.

Gary: This is a very broad assertion and I have no way of knowing whether this is true or not. It may be perfectly rational to allocate more to a yield-oriented asset class in which leverage can be prudently used to magnify returns in a very low-interest-rate world.

Gary: Once again this is a broad assertion and even if it’s true, it may make sense for them to do so. There is a lot of instability around the world, the U.S. has some of the best growth prospects, and offers some of the highest yields in the developed world.

Concern: Political and economic mess around the world.

Concern: Development costs are rising dramatically and buyers are using this to support paying higher prices for assets.

Concern: The election (the memo was written during the 2016 election)

Gary: I usually hate this excuse because to me it’s just a reason for inaction since, with the possible exception of FDR, very little changes materially when a President is elected. On the other hand, this year is truly unusual so I am more sympathetic to this leading to more risk aversion. Nevertheless, we have an $18 trillion economy that will continue to do its thing regardless of who is elected. Of course, there may be policy changes that can affect certain industries, but my sense is that one party will not control the White House and Congress so gridlock will continue to be the modus operandi.

Prediction: Interest rates and cap rates will rise despite central bank support for the following reasons:

Gary: Maybe, maybe not. Janet Yellen has made the case that low rates, despite hurting certain segments of the economy, have helped by lifting asset values higher. I am sympathetic to this point but central banks have to look at all constituents with the goal of trying to do the greatest good for the most number of people by finding the highest points of leverage for its policies while minimizing collateral damage. Clearly, the Fed is targeting Main Street through lower mortgage rates, higher home prices, loftier 401(k)s and more jobs at the expense of savers (retirees) and Wall Street and other financial intermediaries like banks and life insurance companies. The dollar must also be taken into consideration because if rates start rising too far too fast, then the dollar presumably will appreciate and create global strains that will feedback to the United States.

Concern: Income inequality has been exacerbated by low rates.

Gary: This is a fair point but one can argue that wealthy people are the biggest savers and they have been penalized the most by low-interest rates unless they chose to take more risk with their capital by investing it in the stock market, real estate, private equity, and venture capital. On the other hand, most of Main Street does not have the wherewithal or connections to make these types of investments so inequality has arguably been exacerbated as the Fed has tried to inflate asset values to create greater wealth that theoretically should trickle down to the rest of the economy but has not done so to the degree it had hoped.

Prediction: Global capital flows to U.S. real estate will slow and possibly reverse and turn to outflows. The capital could flow in the following directions:

Concern: Infrastructure around the world.

Gary: This is possible but there is a question of political will to do this. There is a shortage of safe assets around the world so there would be strong demand for Treasuries and other sovereign debt to fund these expenditures. It’s possible they may compete but.the jury is still out and this would take decades to play out.

Concern: Persian Gulf countries will be selling off stakes in their oil companies.

Gary: I would have been more sympathetic to his concern if he said that Gulf countries would have to sell foreign assets to fund their large budget deficits and external debt with oil prices having dropped significantly. I don’t think the money drawn to these IPOs is meaningful enough to lead to a divestment of U.S. real estate.

Concern: Fannie and Freddie remain unreformed and if they were held to the same standards as our banks, they would need massive injections of capital.

Gary: This may be true, but there is no political will to reform Fannie and Freddie so the status quo will remain intact.

At the end of the day, his basic premise is that interest rates are artificially low and as a result have created bubbly and overvalued markets for stocks, bonds, and real estate. The Fed has always controlled short-term interest rates since its founding so rates have always been artificial to some extent. I am still in the camp of “lower for longer” and that this should continue to help support apartment values and investor demand for an asset class with such compelling fundamentals.

What he has not brought up, however, and is the hallmark of every bubble and ensuing collapse in real estate is loose lending standards and aggressive loan structures. This is not the case today. There is far more equity being invested, lenders are being prudent in how much they are lending, especially when it comes to construction loans, and there is not widespread use of mezzanine financing or bridge loans that put borrowers at great risk of having assets that are highly leveraged with short maturities. Of course, some of that exists, but nowhere near what took place between 2005 and 2007.

I do very much appreciate him writing his memo, though. It takes courage to put one’s convictions in writing because there is no hiding from them. He was thoughtful in his approach and it is always good to keep an open mind in the face of opposite opinions. As Charlie Munger puts it so aptly,

“People tend to accumulate large mental holdings of fixed conclusions and attitudes that are not often reexamined or changed, even though there is plenty of good evidence that they are wrong.”

While I still remain in the camp of staying the course, I must be cognizant of the fact that I could be wrong and have a margin of safety in the event that I am.

Well? What are your thoughts on my respected investor’s point – or – my counterpoint?

2 comments on “Point Counterpoint - My Reaction to an Investors Memo”