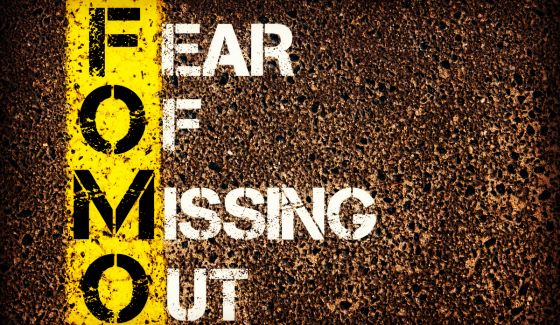 “It is the mark of an educated mind to be able to entertain a thought without accepting it.”

The fear of missing out can be a powerful motivator. Of course, taking action based on this fear can lead to both positive and negative consequences. The latter tend to arise if the primary insecurity is envy, wanting what others have and taking actions that don’t result in getting what you want and ending up doing more harm than good. Taking imprudent financial risks is a good example of this. The envious investor (speculator is probably a more accurate description) usually ends up having lost money and feeling much worse about himself whereas the person he envies is probably trekking along continuing to focus on her strengths and shoring up her weaknesses.

Fear of Missing Out – FOMO

Of course, not all actions taken were catalyzed on a fear of missing out have to have negative consequences. On the contrary, they can be truly life changing in very beneficial ways, particularly if viewed through the prism of regret minimization. At the same time, one must make sure that taking action that will minimize regret in the short term will not be trumped by consequences that will lead to regret in the long run. We all know our judgment and defenses are compromised when we have consumed alcohol. As a result, we may choose to take certain actions or go on an adventure that seems so alluring at the time and actually can be amazing provided it doesn’t lead to harmful outcomes (e.g. car accident, jail, bodily harm, missed obligations, etc.).

Thus, as boring and so not fun as it sounds, it is really important to “think through the drink” as they say in A.A. and evaluate every major decision through the lens of risk and reward and to think independently. Have an open, yet skeptical mind and always ask:

According to Charlie Munger, one of the great influential forces on human beings is what he calls “Social Proof.” Social proof is very similar to the fear of missing out. This is what Munger had to say about Social Proof in a speech at Harvard.

“If you think about the doctrines I’ve talked about, namely, one, the power of reinforcement— after all you do something and the market goes up and you get paid and rewarded and applauded and what have you, meaning a lot of reinforcement, if you make a bet on a market and the market goes with you. Also, there’s social proof. I mean the prices on the market are the ultimate form of social proof, reflecting what other people think, and so the combination is very powerful. Why would you expect general market levels to always be totally efficient, say even in 1973-74 at the pit, or in 1972 or whatever it was when the Nifty 50 were in their heyday? If these psychological notions are correct, you would expect some waves of irrationality, which carry general levels, so they’re inconsistent with reason.”

I recently read an interesting study that speaks to social proof and how it influences an individual’s decision to buy a home or rent a home. In Social Networks and Housing Markets, the authors utilized 1,242 Los Angeles Facebook users who responded to a housing market survey. Over half of them regularly talk to their friends about investing in housing. The authors wanted to assess if the investment experience of people in the respondents’ social circle, but outside of their area, would have any impact on their decision to rent or buy a home and, if buying was the decision, how this would impact the price they would pay, the size of the home purchased, and down payment utilized.

The researchers came up with some very interesting findings that suggest that one’s social circle can have a big influence on one’s housing decisions. The authors believe their research and statistical analysis show that “individuals whose geographically-distant friends experienced larger recent house price increases consider local property a more attractive investment, with bigger effects for individuals who regularly discuss such investments with their friends.”

The authors draw the following conclusions:

“Individuals whose friends experienced a 5 percentage points larger house price increase over the previous 24 months (i) are 3.1 percentage points more likely to transition from renting to owning over a two-year period, (ii) buy a 1.7 percent larger house, (iii) pay 3.3 percent more for a given house, and (iv) make a 7% larger downpayment. Similarly, when homeowners’ friends experience less positive house price changes, these homeowners are more likely to become renters, and more likely to sell their property at a lower price.”

This social influence tends to feed on itself as it turns out that there is a strong momentum influence in terms of housing demand being influenced by rising home prices. Thus, social proof can get people to jump into home ownership and rising home prices can influence people even more to purchase a home.

In another study, I read entitled Rushing into the American Dream? House Prices Growth and the Timing of Homeownership the authors show that there the probability of buying a home is accelerated in the metropolitan areas with the highest 25% of house price growth relative to those metropolitan areas with the lowest 25% of house price growth. Here are the main findings:

Interestingly this has the same impact as if the Veteran Affairs (VA) benefits were extended to all individuals via a 10% reduction in down payment.

While these studies suggest that social influences and housing price momentum (an indirect form of social proof) can be very powerful forces in catalyzing one’s decision to become a homeowner or staying a renter for longer, this does not necessarily have to lead to negative outcomes. Because others have done well with their home purchases and you want to have some of the same success doesn’t mean you won’t make a wise financial and lifestyle decision. It should be through those lenses that the decision is made versus feeling the need to keep up with the Joneses. It is important to follow the advice of Aristotle and Charlie Munger and listen with an open mind but not a gullible one. Do what is right for you without envy or fear of missing out being the primary motivator.

Have you followed the advice of Aristotle and Charlie Munger? Did FOMO, Fear of Missing Out, factor into your decision or was it a motivator? Did you have an open, yet skeptical mind? Where did it lead you?

One comment on “Powerful Motivator - Fear Of Missing Out - FOMO”