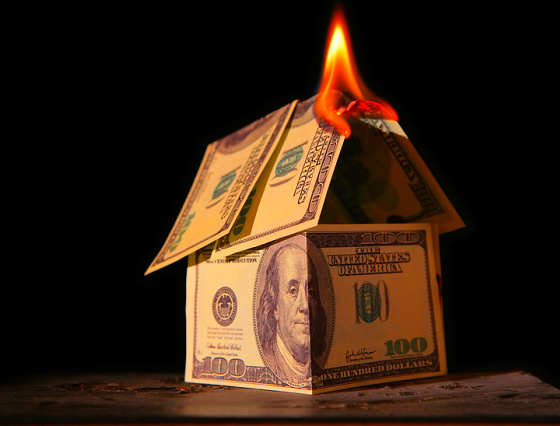 Demand continues to be strong but it has decelerated from the torrid Covid-catalyzed pace of 2020. 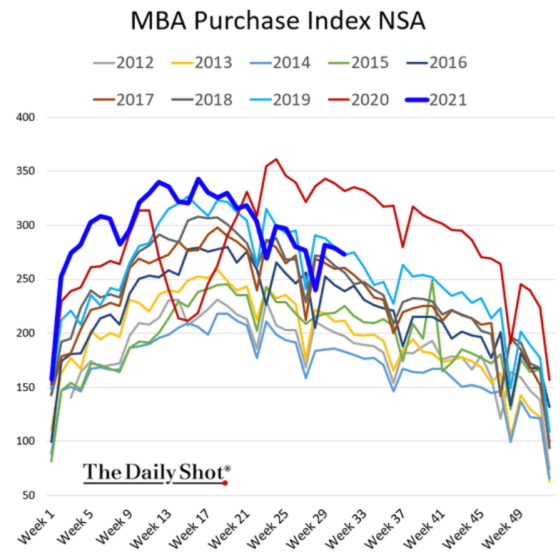 The rate of increase in home prices has been incredibly strong. In fact, we are seeing the highest levels of appreciation in the 28 years covered by this graph. 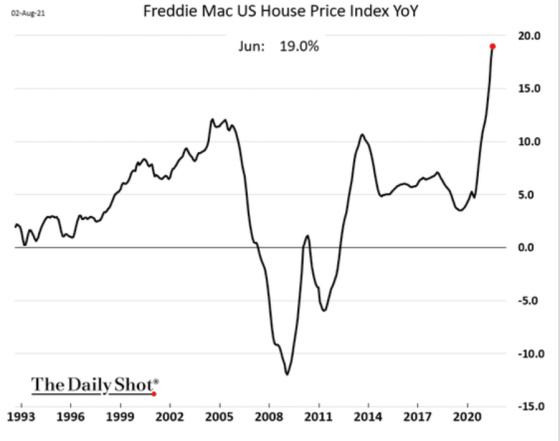 Strong appreciation is not just limited to the United States. It is a global phenomenon as over 90% of the countries tracked in the following graph are experiencing appreciation in home prices with record-high appreciation rates on a weighted average basis. 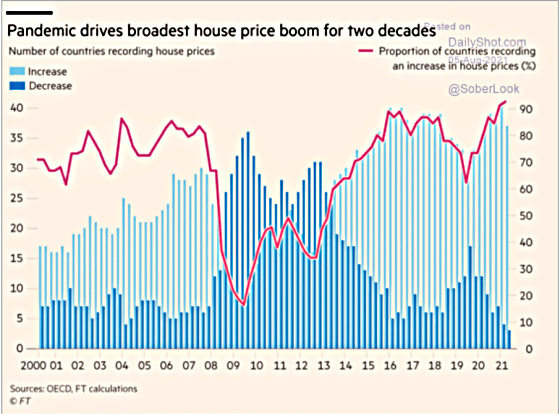 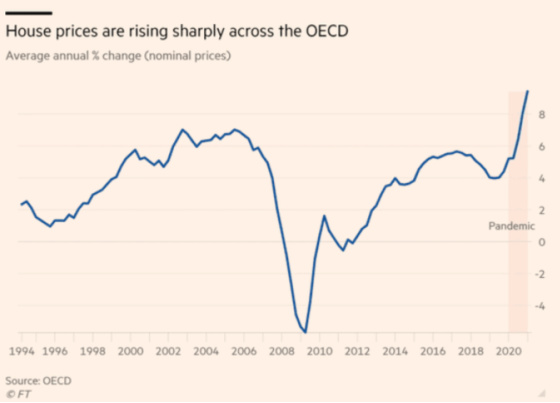 To put these price gains in perspective, the following chart shows that we are experiencing a historically high liftoff in home prices (adjusted for inflation) relative to the past 100+ years. 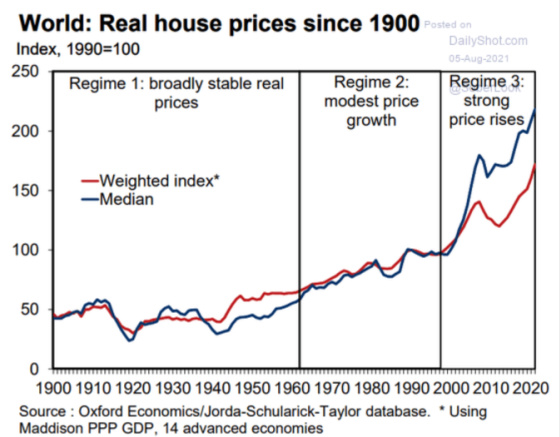 This cycle has not only shown strong growth in home prices, but it has been durable as well. 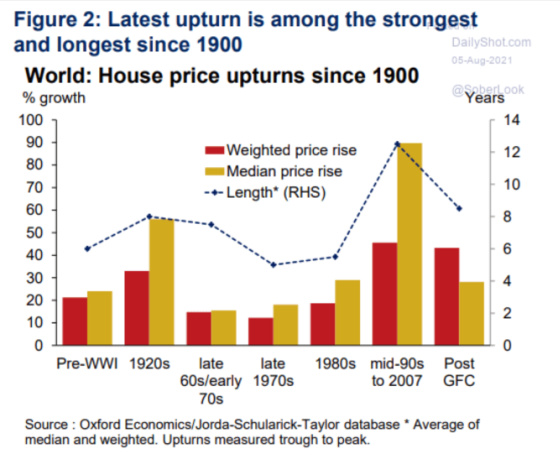 The rate of appreciation is projected to slow down quite significantly over the next few years to approximately 3%. 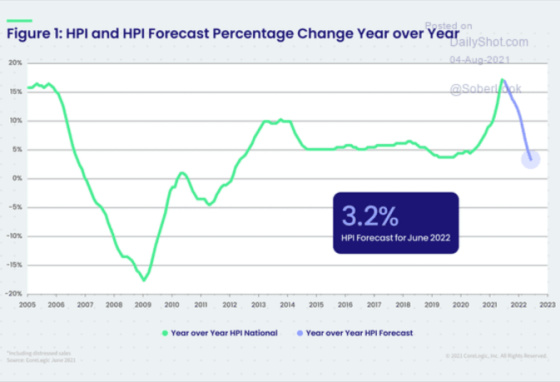 Consumer sentiment related to whether it’s a good time to purchase a home is quite dismal. This isn’t surprising given how much more costly it has become to purchase a home from a price perspective as well as the stiff competition to buy a home in many markets. I imagine there is some disillusionment influencing people’s pessimism reflected in these survey results. Those who already own homes are probably happy that they do and have benefited from the appreciation but have very little interest in going back into the market and buying at these prices, even though they can get a higher price for their homes. And for those who don’t own, I would think it would be disheartening to face such competition to purchase a home in addition to the higher prices one must pay to get in the game. 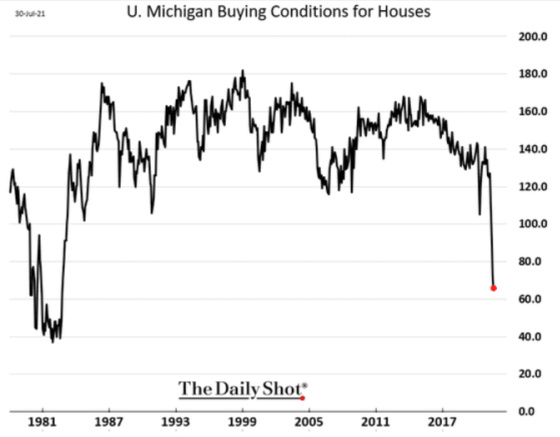 It’s interesting to see that the level of pessimism is getting close to the levels reached in the early 1980s. As the following chart shows, back then we had record high mortgage rates while today they are at a record low.

And while surveys are interesting to gauge sentiment, I still think it’s more important to watch what people do versus what they say. I still expect there should be sufficient demand to buy the vast majority of homes for sale (existing and new) without prices being impacted.

The American consumer is healthy from a financial standpoint as the level of savings is quite high and mortgage payments are relatively low compared to historical averages. Absent a material change in mortgage rates, there still appears to be sufficient buying power for home prices to hold steady and to continue to appreciate. 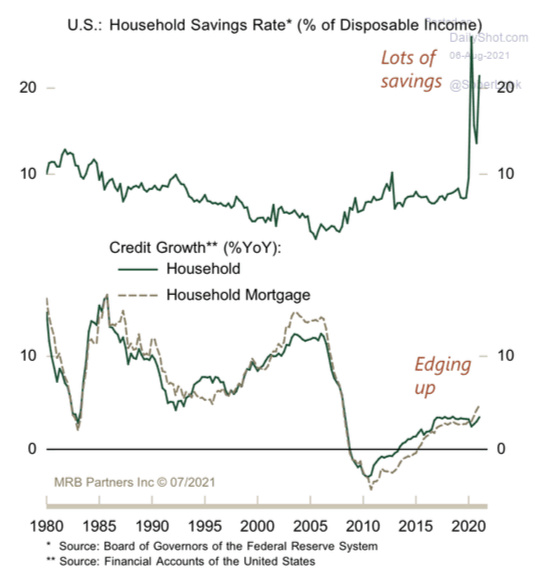 As strong as the single-family home market is, the apartment is doing equally well, if not better. Bloomberg had a recent article about vacancy rates dropping for apartment owners. 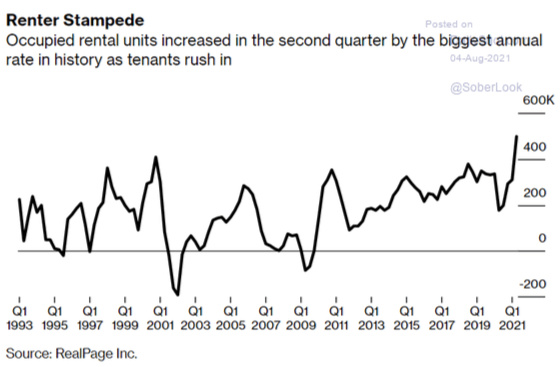 At CWS we are experiencing very strong demand for our apartments and improving pricing power. The explosion in demand is far beyond anything we were projecting and the gap between what new residents are willing to pay versus those previously paid by the prior occupants has never been as wide in our over 30 years in the apartment business. We are not sure what the catalysts are for this wave but the article on Bloomberg has some theories which are excerpted below.

The biggest wave of tenants in U.S. history has arrived, and landlords are responding with the largest-ever rent increases.

In the second quarter, the number of occupied units jumped by about half a million, the biggest annual increase in data going back to 1993, according to industry consultant RealPage Inc. Rents on newly signed leases soared 14.6% in June from a year earlier, the most on record, and occupancy reached 96.5%, matching the previous high in 2000.

The rental market is getting flooded with Americans searching for apartments. The economy is revving up, and young people ready to leave their parents’ homes are competing with others who delayed moves because of Covid-19. At the same time, remote work is enabling families to relocate to more affordable areas, and vaccines have made seniors comfortable again with downsizing.

“We’re seeing record-low vacancy,” said Jay Parsons, deputy chief economist for RealPage. “Wages are up, people have the money. And people are saying take my money, I want to move in.”

One can see that we’re not alone as apartment owners experiencing a spike in our rents. The following survey shows almost a straight lineup since the start of 2021. 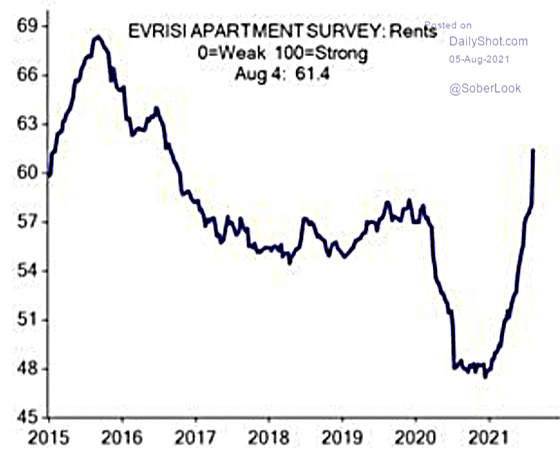 We are also benefiting from fewer people moving out to purchase homes, which is consistent with some of the charts I showed above suggesting a slowdown in demand (yet, still robust) and more pessimism about it being a good time to purchase a home. 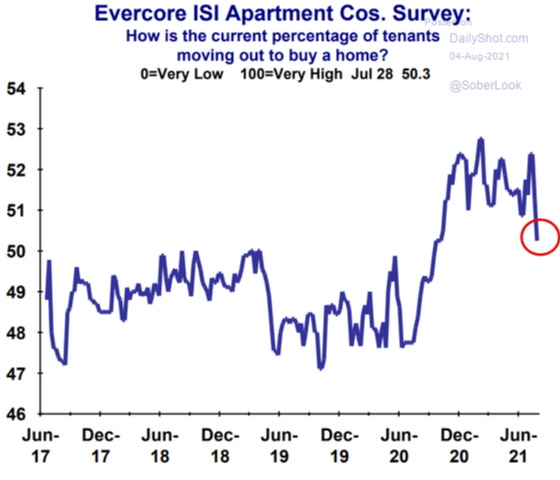 Investors have been well onto the scent of improving apartment fundamentals as shown by the significant outperformance of apartment REITs since the start of 2021. 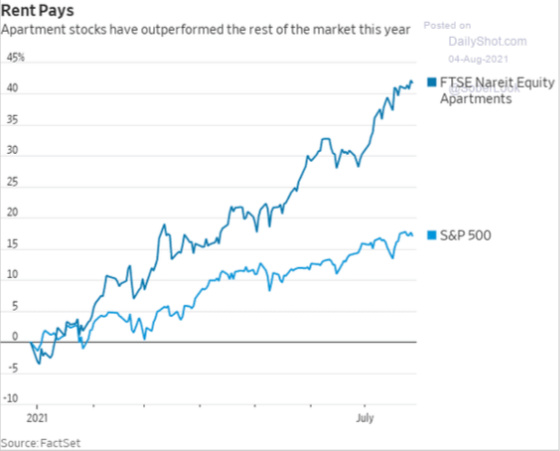 Covid has definitely catalyzed a lot of changes in our economy and society. And whenever there is disruption there will be winners and losers. One can unequivocally say that homeowners and owners of rental housing (who have been able to collect their rents) have been major beneficiaries. One is hot (single-family) but the other appears to be even hotter (apartments).