T.R., Dana Delany, and the Power of a Platform 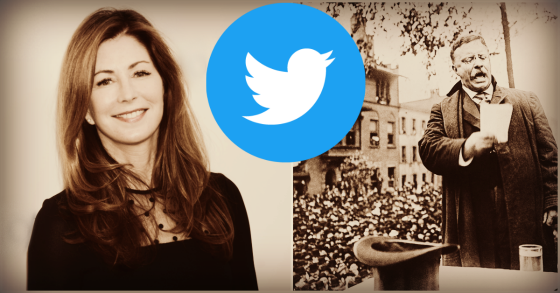 Kudos to Heidi Garland who handles my social media. She is quite in her postings on my behalf on Facebook, Twitter, and LinkedIn. I never know what interesting tidbit she might be posting. Of all the platforms, Twitter is the most ephemeral as tweets are sent and they tend to have a short shelf life to them. As a result, I don’t find myself going there too often because it is kind of like watching a ping pong match. Every so often I will get notifications from Twitter that people liked one of the tweets that Heidi did on my behalf or I have new followers. Given how quickly it moves I don’t devote that much time to Twitter or see if the tweets gain traction. The one major exception, however, was on October 14th when Heidi tweeted the following: 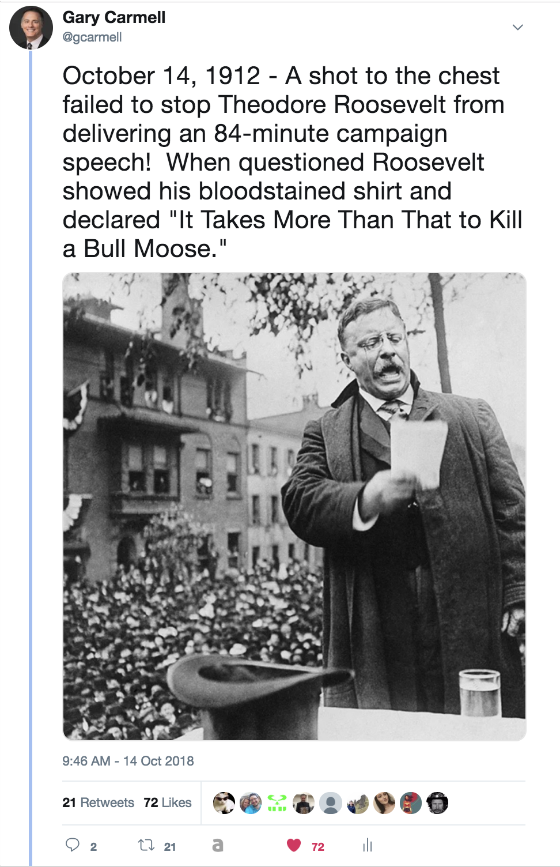 Besides being a fascinating “This Day in History” factoid, it was aesthetically pleasing as well. I honestly wasn’t aware of it until, out of the blue, I kept getting alerts on my phone about people liking the tweet. And they kept coming and coming and coming. My curiosity got the best of me as I had to take a look to see what was going on. And this is what I discovered. 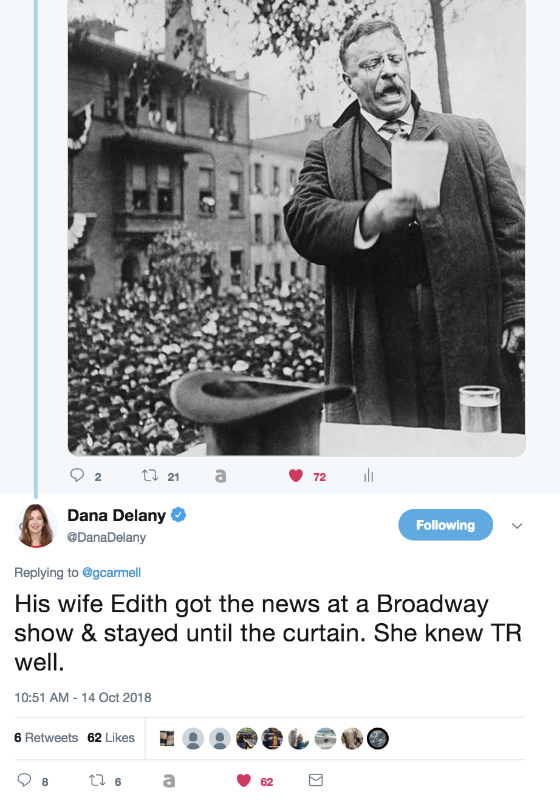 The actress Dana Delany, who yes I had a crush on a while back (and my wife knows about it), responded to the tweet. My natural reaction was, besides first assuming there must be something special about me or why else would she respond to the tweet, how did she come across it?

The answer to how she knew so much about Edith Roosevelt is answered in her response: 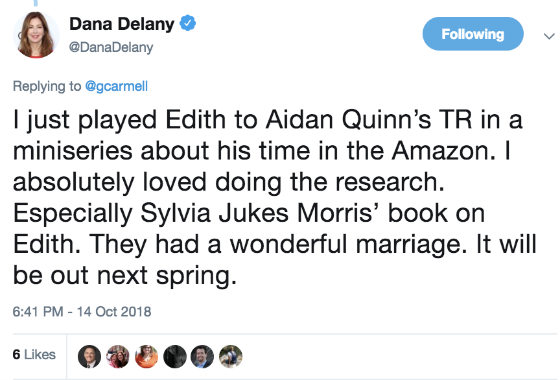 I still don’t know how she saw the tweet in the first place. Whatever the reason, her response generated a massive amount of liking of her reply and retweeting it such that I felt very popular and special for a couple of hours. Here is the activity related to that tweet.

If you would like to read all of the comments on Twitter, several are quite clever, here’s a link:  Dana Delany & TR

So all of my pontificating about interest rates and brilliant insights about investing, philosophy, real estate, the economy, etc. can’t hold a candle to the traffic generated by a very well known actress with over 300,000 followers responding to an innocuous tweet about Teddy Roosevelt. Talk about a humbling experience and the power of having a platform. 15,000+ impressions for this one tweet. Who would have thought that? Not that I’m complaining.

Since it was a busy week and I didn’t really want to talk about interest rates again, I thought I would follow in Heidi’s footsteps and tap into one of my favorite resources, newspaperarchive.com, and go back in time and find headlines that I thought were interesting for the first five days of this week. I decided to start with October 22, 1900, for the first one and then add five years for each subsequent day such that my excursion into the past ends with October 26, 1920. Without further ado, here we go.

In this sad story, a wedding that was in progress was interrupted with the groom being arrested for having promised another woman he would marry her. This obviously was quite a surprise to the bride and led to her fainting after she realized her husband was being taken away by two police officers in the middle of the ceremony. I can only imagine how she reacted when she found out her almost-husband had committed to marry another woman. I hate it when that happens. 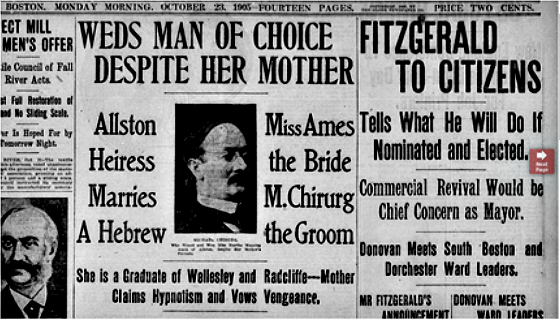 This wedding had a different twist. It happened in defiance of the bride’s mother who, from the article, was a good old-fashioned anti-semite and snob. Her daughter was a well-educated graduate of Wellesley College and Ratcliffe and she asserted that her new husband hypnotized her and she was going to get her revenge. Her sophisticated, blue blood daughter would never stoop so low and marry someone who was Jewish and far less cultured and sophisticated. She sounds like she was quite the overbearing mother and my sense is that the daughter finally had enough and wanted to humiliate her mother and shatter all of the dreams she had for her daughter. Hell hath no fury…

I’ve touched on weddings, anti-semitism, jilted brides, humiliated mothers, so taking a trip back into the history of America wouldn’t be complete with referencing the World Series. With that being said I can’t say I’m very happy about this one as my grandfather was a die-hard Chicago Cubs fan and it’s very possible he followed this World Series very closely when he was a kid. When the Cubs finally won the World Series two years ago, I couldn’t help but think about how happy he would have been as he stuck with them through thick and thin and he would never give up on them. 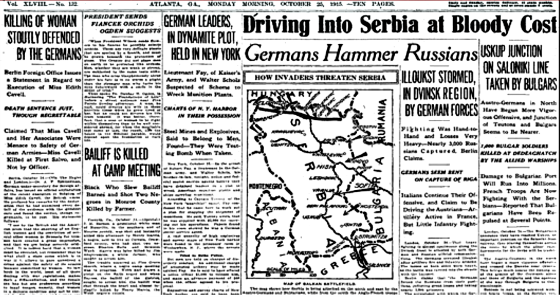 I thought this was a good representation to show how brutal the times were back then. As Billy Joel has famously sung,

“We didn’t start the fire. It was always burning since the world’s been turning.”

This talks about a vicious battle in Serbia between the Russians and Germans and if you look at some of the other headlines, they are not very cheerful either. This was yet another brutal time in European history. Every headline is quite negative. 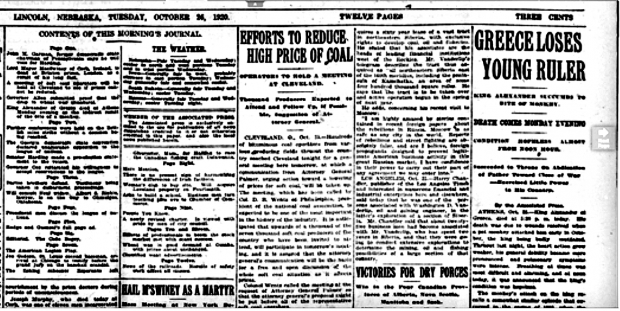 A rather tragic ending to the life of a young man. In this case, it was Alexander who was the King of Greece and just 27 years old when he died. What led to his demise? A monkey bite. It led to sepsis and he was unable to survive.

While I don’t think any of these will be interesting enough to capture the attention of Dana Delany, one can always dream. Who knows, maybe another famous person will see something that piques his or her interest, make a comment, retweet it, and then it’s off to the races.

Last week was a great reminder of how powerful a large cadre of loyal followers can be. The impact of a vibrant, highly engaged, and large platform cannot be overstated.