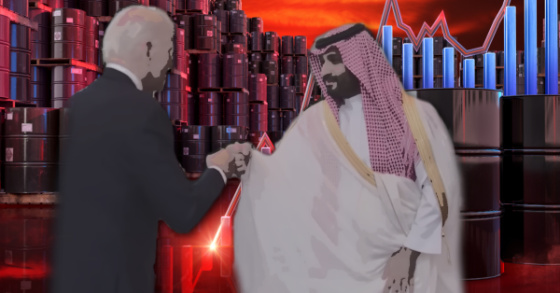 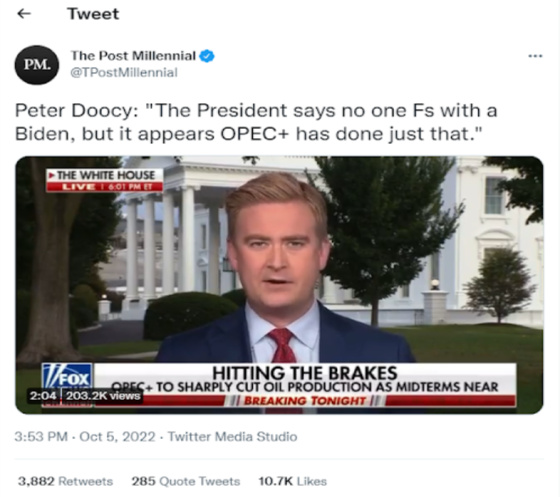 President Biden was caught on a hot mic when visiting Florida telling the mayor of Fort Myers that “No one Fs with a Biden.” As the tweet above shows, however, it appears that OPEC+ is doing just that. The question is, what will Biden do about it? Spoiler alert. The answer is at the end.

It’s conjecture, but I think the Saudis, and to some degree, the UAE, are sending a signal beyond trying to reverse the slide in oil prices.

I think the de facto ruler of Saudi Arabia, Crown Prince Mohammed Bin Salman (MBS), wants to extract a form of retribution on Biden for the massive release of oil from the United States Strategic Petroleum Reserve (SPR) that he ordered to lower gas prices to help with his terrible poll numbers and the inflationary problems running throughout the economy. The release was so significant that the SPR is now at its lowest level since 1984.

This has unquestionably contributed to oil prices having fallen by approximately 25% since June.

In addition, this will not come as a shock to anyone that pays attention to global affairs, but MBS is not a big fan of democracy and the inherent messiness and disorder that comes with open societies. And I’m sure he was furious about becoming a pariah to the West after his henchmen killed Washington Post reporter and Saudi citizen, Jamal Khashoggi. They severed off some of his fingers, beheaded him, and then chopped up his body with bone saws. All in a day’s work and not something that is too out of the ordinary in that part of the world.

MBS was only released from purgatory after Biden had to fly to Saudi Arabia to come groveling to MBS in July to persuade him to loosen the spigot on Saudi oil production to help lower energy prices around the globe to lift Biden’s sagging poll numbers at home.

And given MBS’ penchant for authoritarian rule and detesting consensus decision-making, it’s not a big surprise that he and Putin have a very good relationship, and Saudi Arabia is willing to take into consideration Russia’s interests even if it goes against the United States.

Russia does not have to be a party to OPEC+ cuts because it’s already producing less than its allocated share, so it will benefit from the higher prices that should result from OPEC+ cuts, even though it may have to sell its oil at a discount.Click To Tweet

With that background, I thought I would turn to some charts showing 1) how OPEC+ cuts will probably be more like 1 million barrels per day as a number of countries are not able to meet their quotas already and 2) why, absent a material increase in demand from a recession, conservation, or more consumption of alternative energy sources, it would appear that we are more at risk of materially higher prices than lower.

Let’s first look at a couple of charts from the Federal Reserve Bank of Dallas, which shows how OPEC+ has been falling short of its output target by approximately 1 million barrels per day. 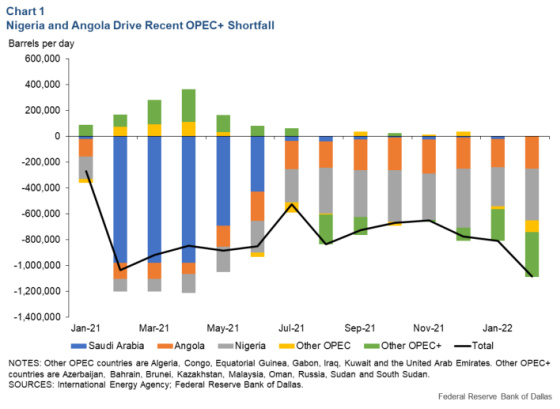 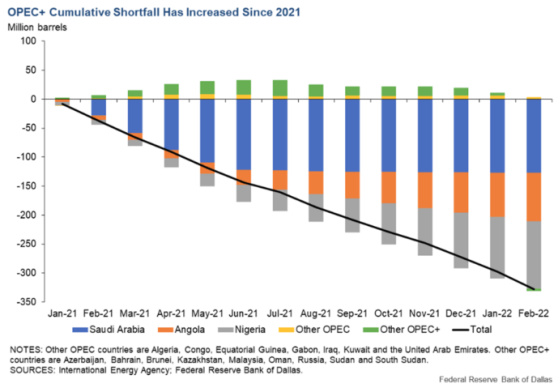 The primary challenge for increasing global oil production is the material drop in spending to explore and develop fields worldwide since oil prices cratered in 2015. Shale picked up a lot of the slack. Still, it too is facing supply challenges as governments demonize oil producers, and the huge incentives for alternative energy make it more challenging for firms to invest greater sums to increase production. In addition, many shale producers learned their lesson when growth produced at any cost led to many firms going bankrupt or needing to access very expensive capital to keep afloat during 2020 and 2021. Shareholders now demand much more capital discipline, and management teams are towing the line accordingly.

Thus, with OPEC+ already falling short by approximately 1 million barrels per day, the announced cut of 2 million is really closer to 1 million, which will be absorbed mostly by Saudi Arabia, the UAE, and Kuwait.Click To Tweet 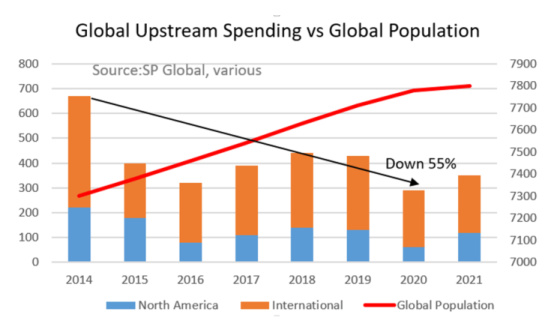 Taking a look at the domestic supply situation, one can see that inventory levels are seemingly at a healthy level. 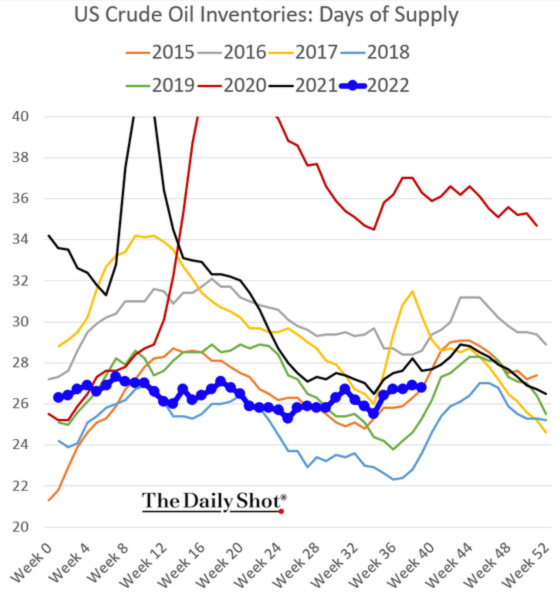 On an absolute basis, U.S. crude inventory levels seem to be fine when excluding the Strategic Petroleum Reserve. 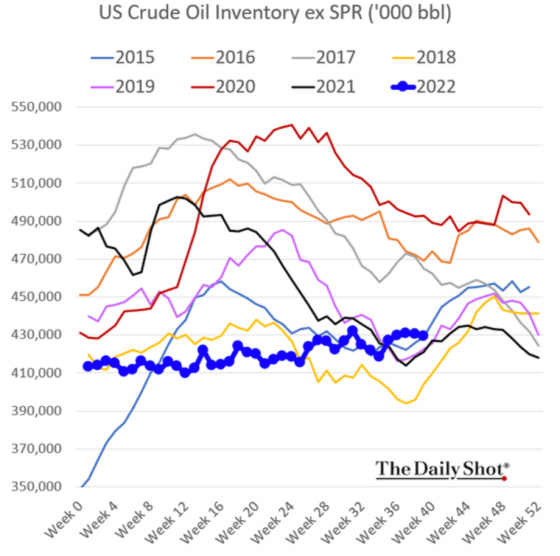 The picture changes dramatically, however, when the SPR is taken into consideration. Inventory levels are dramatically less and far below the levels of previous years. And let’s not forget that at some point, the United States is going to have to purchase a lot of oil to refill the SPR, so that will have an impact on demand and prices. 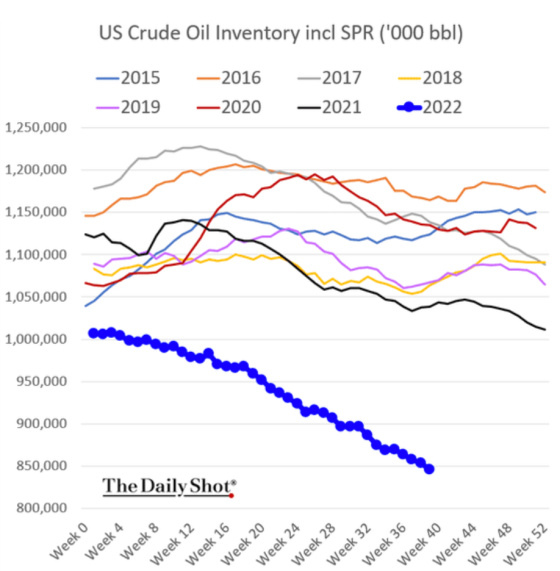 I’ve noticed in California that gasoline prices are back up near their summer peak, and this chart is an indication as to why. Inventories are very low. 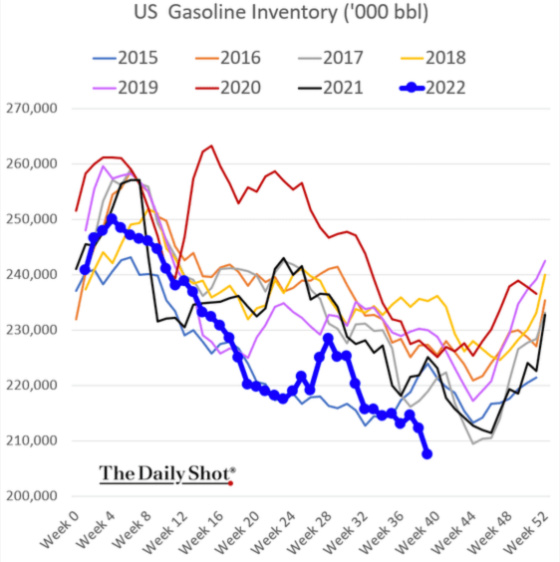 The number of days of inventory is on the lower end of recent historical norms. 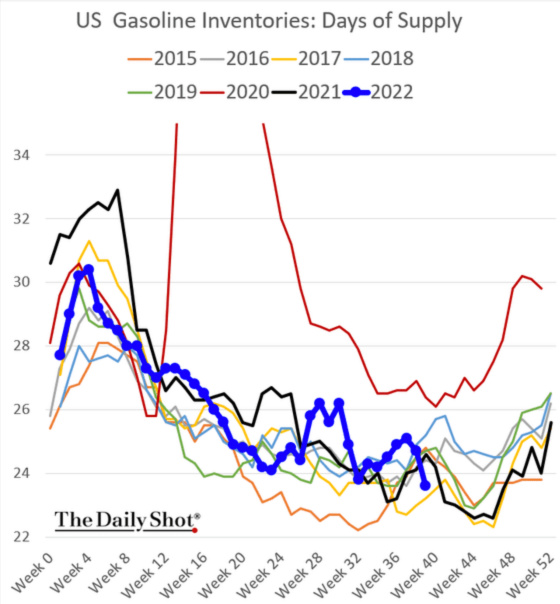 The same is true for distillates. 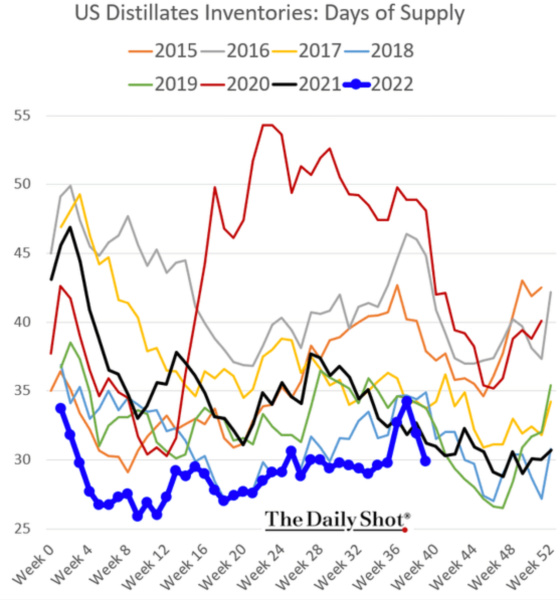 And since it’s clear that no one Fs with a Biden, I was delighted to see that he’s not taking the OPEC+ punch in the face lying down, and he has a concrete plan to overcome our reliance on OPEC+.

And while I’m hoping that Biden prevails, I also wouldn’t bet against someone who is not afraid to send his henchmen to kill a Saudi citizen and U.S. reporter by using bone saws.

This will be a very interesting fight to watch.