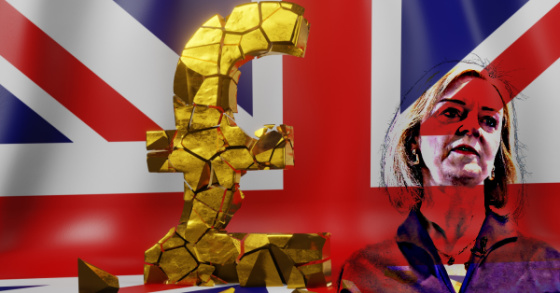 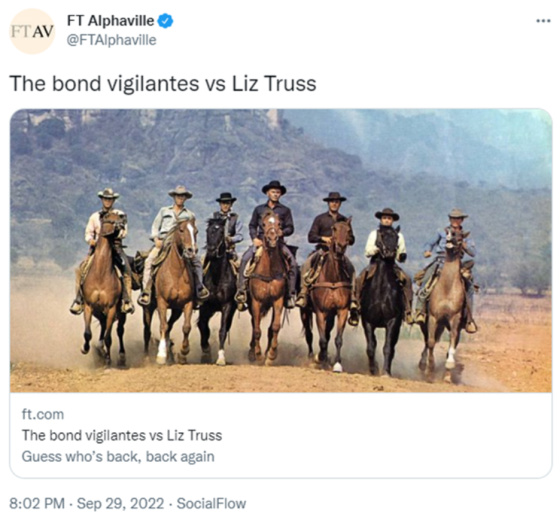 The value of a country’s currency is a good barometer of its economic policies, human capital, competitiveness, freedoms, growth prospects, etc. From this chart, one can see that Great Britain has been on a long decline from a competitiveness standpoint versus the United States. And this has cascaded to the downside quite dramatically over the last few weeks. 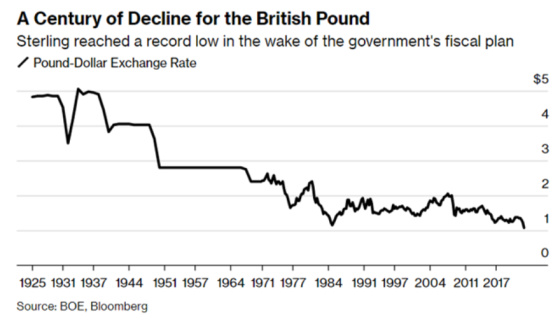 This graphic shows the cost of insuring the bonds of various countries against default and how these prices compare to their yearly highs and lows. As one can see, global fears have been escalating as many of these credit default swap spreads are near their highs. One country that sticks out is the United Kingdom as its spread has widened the second most, only behind Italy. On a percentage basis, the U.K. has seen its cost of insuring its bonds against default go up the most relative to its average for the year. This is both on an absolute and percentage basis. 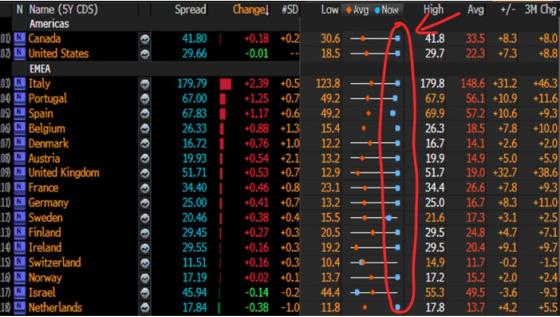 Why are investors turning so negative on the U.K.? The markets have lost trust in the country’s new Prime Minister Liz Truss, and her Chancellor of the Exchequer, Kwasi Kwarteng. Rather than learning the lessons from the excess spending of western economies, particularly the United States, and how it helped fan the inflationary flames during Covid, Truss and Kwarteng are pouring gasoline on the fire in order to combat Great Britain’s enormous increase in energy costs and to jump-start the economy by proposing to carry out a huge tax cut and massive spending increase to subsidize British consumers to help lessen the burden of higher energy bills.

This chart shows how the proposed tax cuts are the second biggest in 50 years on an absolute basis. 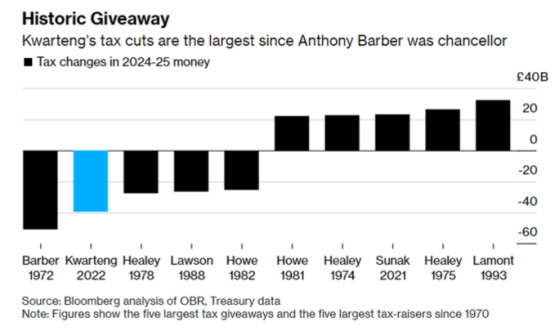 What particularly spooked investors was that there was no plan in terms of how these tax cuts would be funded. And this came a few weeks after a top UK Treasury official was sacked because he was too conventional in his approach, and Truss thought much more “modern” thinking was needed to shake things up.

This is what Bloomberg had to say about the market having very little trust in Truss.

The markets “aren’t willing to trust the Truss administration’s claims that it will deliver medium-term fiscal sustainability on the basis of its word alone,” said Allan Monks, an economist at JPMorgan Chase & Co. in London. “That reflects a broader distrust in markets about how UK policy making has been evolving — and in our view, that distrust is entirely justified.”

Nevertheless, Friday’s act of fiscal largess — being unfunded — marked a major break from the economic traditions of Truss’s Conservative Party. The government still needs to set out how it will cover the additional borrowing required to fund its £45 billion of tax cuts and further £60 billion-plus for its program to offset the recent surge in energy bills.

One former Tory adviser, who asked not to be identified, was baffled by the decision to announce a mini-budget without a statement from the Office for Budget Responsibility. Not having an OBR forecast looked like a deliberate snub to the markets, he said, a sign that the government didn’t think it needed its sums to add up.

And what makes the market’s reaction even more damning for Truss is that her chief rival in the Conservative Party, former Chancellor of the Exchequer Rishi Sunak, who ran against her to replace Boris Johnson, called her economic policies a fairy tale.

“We cannot make it worse; inflation is the enemy that makes everybody poorer,” Sunak can be heard saying. “We have to be honest. Borrowing your way out of inflation isn’t a plan – it’s a fairytale.”

'We have to be honest. Borrowing your way out of inflation isn't a plan - it's a fairytale.'Click To Tweet

And this is what he had to say more recently that proved to be quite prescient.

But in an interview with the Financial Times published Tuesday night, Sunak said he “struggled to see” how Truss’s tax and spending commitments “add up,” warning it would be “complacent and irresponsible” for the next prime minister “not to be thinking about the risks to the public finances.”

Sunak, the former Chancellor of the Exchequer, told the paper he feared that unfunded spending commitments would lead to spiraling debt, rising inflation, interest rates and borrowing costs.

Urging Truss to stick to fiscal rules that would see debt falling as a share of GDP within three years, Sunak said: “Ultimately, you have to decide whether you think sustainable rate of borrowing are important or not. I think they are.”

And why do I say he was so prescient? Because the pound crashed and long-term interest rates exploded higher (but not only for these reasons, as I will soon discuss).

Financial dislocations often reveal where vulnerabilities lie in the system that in hindsight were hidden in plain sight. It turns out that many British pension funds were using a hedging and leveraging strategy that could allow them to make relatively safe investments that would generate returns that would exceed the cost of their liabilities. I won’t go into the mechanics of it but essentially they would do fine as long as interest rates did not move materially higher over a short period of time.

Unfortunately, this is what happened after Truss announced her tax cuts and spending plan that freaked out British bond investors, who were rightly concerned that inflation would only go higher as a result of the huge increase in spending and cutting of taxes. The last thing long-term bond investors want is to be paid back over a long period of time with an ever-depreciating currency. If they feel like fiscal and/or monetary policy are going to sow inflation, then they will demand higher rates to compensate them for the increasing inflation risk. This led to bonds being sold, their prices dropping, and as the pension fund investments in these bonds started to lose value, they needed to post more collateral which required them to sell long-term bonds, which pushed the price lower, which in turn necessitated even more selling. It reached the point that much of the British pension fund system was at risk of becoming insolvent. The only actor that could step in and help stabilize the patient was the Bank of England, which it did by carrying out a dramatic intervention to purchase 30-year Gilts to arrest the decline.

Here is the chart of the 30-year Gilt. One can see how it exploded higher due to the forced liquidation by pension funds to raise funds for margin calls and then how it dropped after the intervention by the Bank of England. 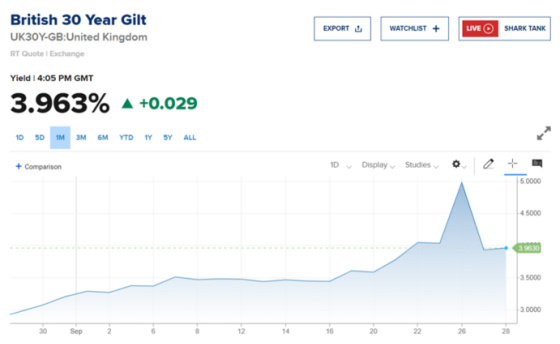 Here is a longer-term chart. 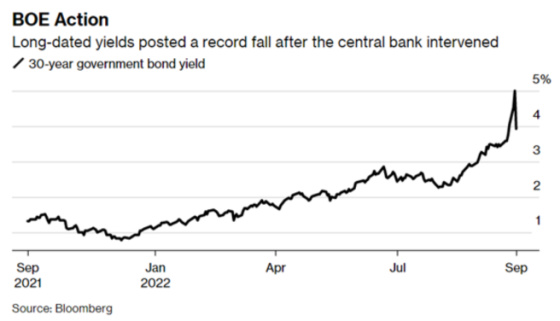 One can see that the Bank of England’s balance sheet has grown dramatically since 2000. This chart goes through 2019, so it’s even higher now as it continued to expand during Covid. The only historical precedents were in the early 1700s during the South Sea Bubble and during World War II. And yet, both of those were still exceeded by the balance sheet growth of the last 20+ years. This is another contributing factor to bond investors’ growing skittishness in holding long-dated Gilts. 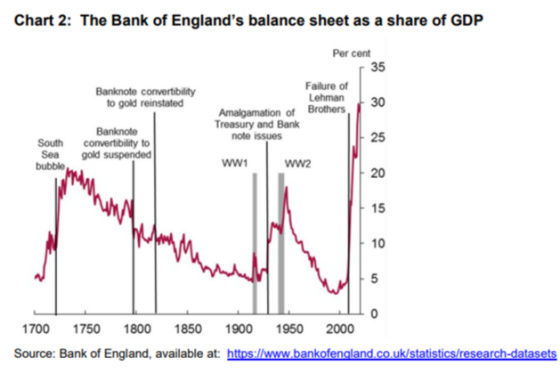 When compared to other countries, however, the size of its balance sheet relative to the GDP of Great Britain is not very large and is a lot smaller than Japan and Switzerland. Despite this, my sense is that investors are more concerned about the trend of the balance sheet in terms of its exponential growth versus its absolute level. This, combined with Truss’ policies, have lessened the trust investors have in owning debt securities denominated in a currency that continues to depreciate and now seems to be implementing economic policies that one would normally associate with an emerging market. 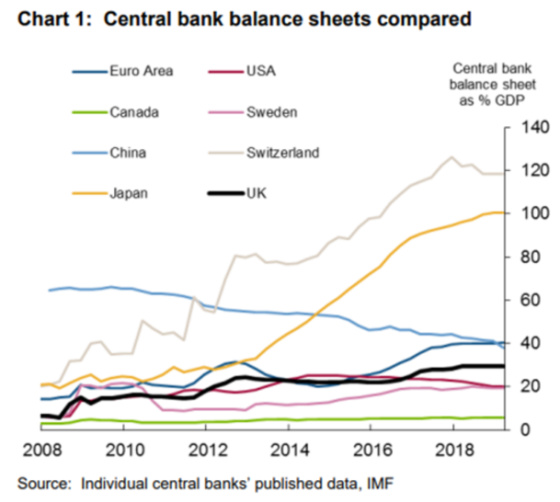 Here is what the Economist magazine thinks of Liz Truss’ policies so far. 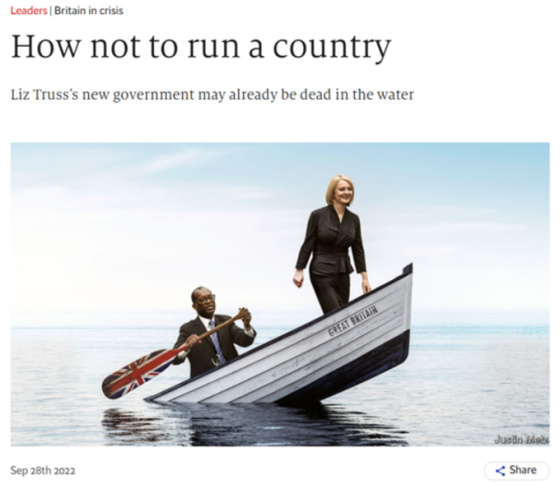 But more importantly, what do British voters think about Liz Truss and her fellow Conservatives? Based on this chart, the prospects for holding onto power look horrendous so this is not a vote of confidence in the Tories ability to rule and their policies. 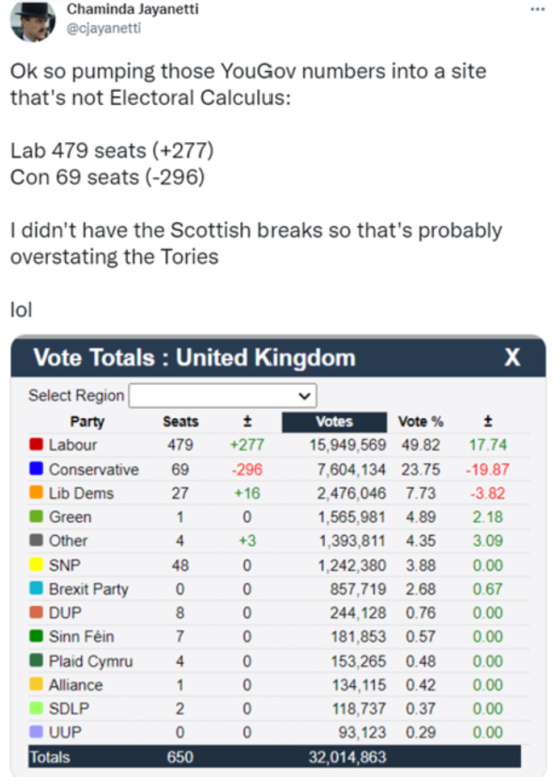 If these trends hold through 2024, when the next elections are to take place, then the Conservative party will be massacred almost as badly as the Russian army in Ukraine. One might argue that both are well deserved due to the disastrous policies and arrogance of the leaders. This has already been proven in Russia. Only time will tell in the U.K.

Based on the polls and the terrible prospects, perhaps Truss and her team feel like the only chance they have of staying in power is to implement unorthodox, disruptive policies that are akin to throwing a Hail Mary in football. Rather than just accept defeat and being a caretaker government for a couple of years, why not really go for it and see if they can turn the game around with a low probability but high reward deep pass into the end zone?

Clearly, Miss Truss has built up an incredible amount of mistrust in a short period of time. It will be interesting to see if she backpedals or if she keeps the pedal to the metal. If it’s the latter, it will be a fascinating experiment to see unfold. I’m glad I have to go to London very soon as my greenbacks will go a very long way in terms of providing me with unprecedented purchasing power.