See here how everything

Lead up to this day

This post is about a proud father acknowledging his daughter, and not just for the wonderful accomplishment that was just bestowed upon her, but recognizing and acknowledging all that it took for it to lead up to that point.

In books like Mastery, Talent Is Overrated, and Outliers the authors use examples and cite research showing how it often takes 10 years for a very focused person intent on honing his or her craft to develop deep domain knowledge to become a master. In my humble opinion, my daughter Ariella has been on that same path (as you shall soon see).

Last week was the annual shareholders meeting for the Daily Journal. Charlie Munger presided over the get together as he is the company chairman and, like he does each year, he answered questions from the audience and delivered some very insightful soliloquies (the first 47 minutes of the meeting consisted of Munger speaking for the entire time). And let’s not forget that he is 95. He is astoundingly lucid and sharp. He is not only one of my intellectual heroes, but someone I hope to emulate if I am lucky to live a long life (something I do not take for granted).

Munger could not emphasize enough the importance of developing a circle of competence and intently growing and deepening it. To do this effectively requires one to be rational in terms of honestly evaluating how one is doing relative to one’s peers or other people one aspires to model himself after. In no event, however, should one slip into envy when studying others as there is no benefit to envy as it can only bring about dissatisfaction and potential misery. One should be honest with regard to his or her level of competence, confidence, and whether one is growing that circle of competence. It is a lifelong pursuit of ever growing knowledge, competence, and excellence.

So why do I think that Ariella has been on a path to mastery? She has already reached the 10-year mark. If you were to read my book, you would see how Roneet discovered, quite unexpectedly and unintentionally, that Ariella was publishing her work on fiction websites and developing a bit of a fan base at the age of 12. Fast-forward 10 years and what follows is a list of accomplishments and acknowledgments related to her writing as communicated in a cover letter she wrote in hopes of getting a summer internship.

First and foremost, I am a writer myself. Poems, short stories, and essays of mine have been published in such places as Maudlin House, Spry, Words Dance, Souvenir, Up the Staircase Quarterly, Alexandria Quarterly, and Burningword Journal, among others. Besides poetry, I have also been named a 2014 Foyle Commended Poet of the Year and a 2015 and 2016 winner of the Blank Theatre Young Playwrights Festival, in which my one-act plays were professionally staged in Hollywood, with actors such as Lindsey Shaw, Julie Gonzalo, J.R. Bourne, and Jessy Schram. I have also participated in writing workshops at Kenyon College, the University of Iowa, Young Playwrights, Inc., and the USC School of Cinematic Arts (in an Advanced Screenwriting class where I completed a full-length screenplay). Even though I am a writer, I make it a point to edit as well: I was Editor-in-Chief of my high school’s literary magazine, as well as Head Copy Editor of the newspaper, and I have participated in editorial internships at Ms. Magazine, the Orange County Register, and Cleaver Magazine. These experiences have given me deep insight into what it takes to produce and refine written works, the intensity one has to commit one’s self to each word and fragment. On campus, I remain active with writing and editing as an editor of the Midway Review and a contributor to the South Side Weekly, making sure my skills do not atrophy. On the film front, in December 2016 I participated in a weeklong externship on the set of Grimm, and I recently wrote a five-episode comedic miniseries for Maroon TV, UChicago’s TV Station. I am currently in the midst of writing the screenplay for the feature film of the concept. 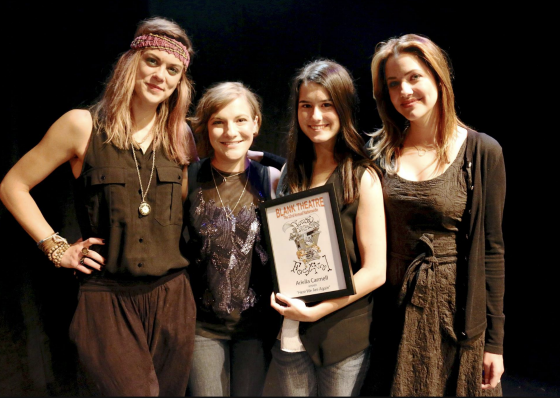 To put one of the awards into context, this is what was written to her when she was announced as one of the winners:

We are delighted to let you know that you have been selected by judges Grace Nichols and Simon Barraclough as one of the 85 Commended Foyle Young Poets of the Year 2014 for your poem entitled ‘Elegy for Silent Cinema’. You were selected for Commendation from an incredible 7,630 entrants this year –a record-breaking number – which is an extremely impressive achievement!

Yes, I know I’m her father and I’m extremely biased, but even I can take a step back and see that this is the epitome of someone committed to mastering her craft. Each time she applies for something and she wonders if she will be chosen, I respond the same way: “If not you, then who?”

Writing is something Ariella has to do to survive and live fully. That may sound melodramatic and a bit cliché, but she is truly a creative, artistic person and she needs to express herself through the written word to be fully alive and to release what is deep in her subconscious. Of course, with any artist and master of anything, there are costs that come with it and Ariella would be the first one to acknowledge that it can be a burden at times. Nothing comes for free and there is a cost to everything but I’m convinced in her case that the benefits have far outweighed the costs.

I am so proud of her because she has worked so diligently for over a decade and she writes to be fulfilled and to tap into her gifts and not for the principal purpose of seeking external validation. With that being said, writers (and all serious artists) do not want to create in a vacuum so it’s important for them to find an audience for their work. For many years Ariella has been participating in different contests and workshops in order to have her work evaluated so that she could get constructive feedback. It has also kept her hungry, enabled her to find ways to constantly challenge herself and to gain validation so that her body of work could ultimately be read and distributed more widely.

So what has all of her hard work and dedication led up to? It has culminated in her winning a fellowship to bring an idea for a script to life over a one year period with a very talented mentor. It also encompasses financial support based on Ariella achieving quarterly milestones so she is incentivized to stay on track. And here is the clincher. It also includes her being publicly acknowledged at the Writers Guild of America awards in New York City on February 17th, 2019 and going on stage to make an acceptance speech. Her mother would have been so proud.

And what is beautiful about Ariella’s accomplishment is that she was able to channel unspeakable pain that she has felt and experienced in the wake of losing her mother into a future script that deals head-on with some of the issues with which she has been wrestling. To transform pain into art is one of the principal roles of an artist as this can help bring healing to the artist and hopefully to many others as well. I am so excited about the possible benefits her work could bestow upon others who have experienced a great loss in their lives. She has the potential to help a lot of people.

When Ariella was in eighth grade her English teacher had each of her students write a six-word Hemingway autobiography. Ariella’s was:

After Roneet passed away, Ariella delivered a beautiful and heartfelt eulogy to her mother. This is one of the things she had to say:

When we passed through Nordstrom or Neiman Marcus or any of her domains, I would have to physically restrain her from buying everything in sight. “That’s your Oscar dress,” she would say. It was never a question that she would be my date on my first red carpet event because it was never a question to her that there would be a red carpet event to go to.

And yes, Ariella did get to walk on the red carpet at the Writers Guild event, see for yourself!

Ariella, how I wish it had been Mom who could have escorted you on the red carpet instead of me as she was your greatest fan and willing to do anything to support you in your craft. For whatever reason, it was not meant to be. I know she was there in spirit and looking down beaming and eternally proud and joyful. She always said you were destined to change the world for the better with your words. You already have, but we all know you’re just getting started (even though it’s been more than 10 years).