From Interest Rates to Insights - Feel to Heal 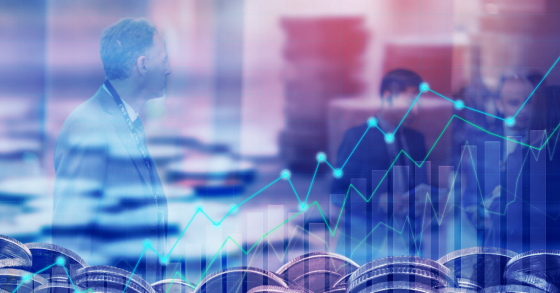 The fact that I’m not going to spend much time on this chart must mean that I still feel the need to release things deep within my subconscious with regard to the loss of Roneet.

While rates were rising I wrote a few times that I was perplexed that they were doing so given the headwinds of tariffs and increasing tension with China, the slowdown in housing, weakness in the auto sector, the sugar high of tax cuts wearing off, weakening corporate credit fundamentals, and rising credit card delinquencies. It seemed to me that the bond and stock markets were ignoring these headwinds. All of this came crashing down, however, in the wake of the belief that the trade tensions with China may not be alleviated and many of the technology leaders getting massacred. The major averages are down about 9% from their peak and 4% this week. Interest rates peaked at 3.24% on November 8th and have come down in a pretty dramatic fashion to 2.85%. I was also very influenced by how aggressively positioned the “smart money” hedgers were for rates to go lower. They kept adding to their long position in Treasury futures as rates were going higher. Historically this was a sign that interest rates would come down and they finally did. The following chart shows that they have cut back their long position but are still overwhelmingly betting on lower rates, just not as aggressively as before. 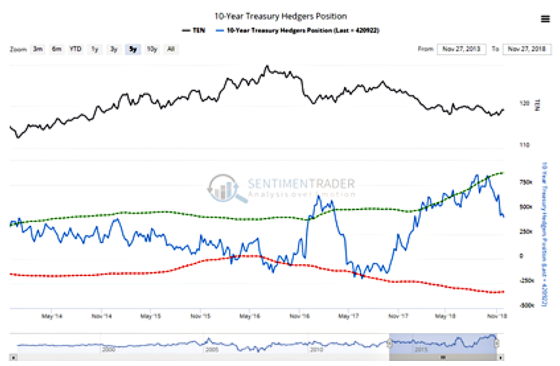 But, as I alluded to above, interest rates are not the purpose of the blog this week.

In the wake of Roneet’s passing, I have understandably been talking to my kids to make sure they are doing ok and to know they can share anything they are feeling with me. I’m particularly sensitive to how my daughter is doing as she is far away at school. We have tried to talk every day and our conversations are often far-reaching, very personal, and often quite interesting. During these free-flowing interactions, I sometimes find myself feeding off of her wit, intelligence, and depth of knowledge via a stream of consciousness. For example, this past week as we were talking certain phrases came out of my mouth that I actually stopped and said: “Hey, that’s pretty good, maybe I will write about that.”

I thought I would cover a few of those, along with one song lyric, that I think is helpful for anyone trying to come to terms with a tragedy. In my case, I don’t know if I’ll ever “come to terms with it.” but hopefully I’ll be able to integrate it and process it in a way that can allow me to move forward while continuing to honor all that we created together.

I was telling Ariella how important exercise has become in my life because it makes me feel so much better and gives me a compelling reason to get out of bed each morning. As we were discussing it I suddenly blurted out Exercise To Exorcise.

I realized that the desire to get exercise in is stronger than the despair of not wanting to do anything. I have found that the endorphins that are released and the healthy mental states that result are catalysts for me to exorcize some of the demons of the loss. And while the pain and suffering will never go away completely, while I am working out and I’m building greater capacity for physical health and well-being, I can put aside anything in my life that is bothering me. And it’s not just the loss of Roneet, although that is, of course, the most prominent emotional challenge for me. I focus on doing what I need to do to accomplish my exercise goals and the result is that I feel better and I see continuous improvement. I really do believe that regular exercise can help exorcize the demons of the trauma over a long period of time.

On one of the days, Ariella called me she was in a very upset emotional state. As we were discussing what she was feeling and the pain she was trying to process, I made a concerted effort to not judge what she was feeling as bad. And conversely, when she was feeling more upbeat I didn’t want to label it good because I want her to feel, no matter what it is and when it hits her, that she can share anything with me and she shouldn’t worry about making me feel bad or worried. I only ask for open, honest communication. That is part of the healing and cleansing process. As we were talking I said Feel to Heal.

The road to healing is through deep feeling and honestly accepting what one is feeling and not holding one’s feelings too closely. This, of course, applies to me. I have to make sure that I don’t ignore what I’m feeling or distract myself from letting my feelings emerge because that is my default pattern. And, as it’s been said, “what we resist persists” so eventually it will rear its ugly head unless it’s dealt with. I would say my most vulnerable state is usually around 2:30 to 3:30 a.m. when I find myself waking up suddenly, almost always in a somewhat agitated state. It’s tough being alone with my thoughts and a bit disoriented. I will say, however, that this would also happen when Roneet was alive but knowing she was there next to me was of great comfort. I no longer have her as my security blanket during those times and it’s not easy. I do try my best to stay present to what I’m feeling, take some deep breaths, think about her, ask myself what am I being called to do or what am I not addressing such that this is happening to me. It’s a process and one in which I think will take a fair amount of time before I experience a less disrupted sleep pattern.

Another insight that I have been turning to is one that I came up with a while back but has taken on more relevance today is telling myself that if I am in the “now” then I have “won” because now spelled backward is won. So being fully present is a very helpful tool to manage the pain and discomfort. I am doing what I can to be focused on the here and now and to be present for those with whom I’m interacting. It goes a long way towards me feeling better because I can be focused on the other person and I can share openly and honestly. Another way of saying that is the expression that the present is a present. We can’t do anything about the past and the future is speculative so we really just have the here and now.  Of course the here and now is heavily influenced by what we have experienced in the past and how we bring that to the table. But the point is to be fully present emotionally, mentally, and cognitively, and by doing so we can live our lives in a much more enriching way.

Finally, there is a line from a Grateful Dead song that says “Believe it if you need it. If you don’t just pass it on.” I think this is highly relevant because the more I go through life and deal with unexpected negative situations, the more I realize that human beings are meaning making machines (MMM) and so we take what we need and discard that which we believe does not serve us so that we can find meaning in our lives and help us get through the difficulties of living a human existence.

People can tell you what to believe and how they think you should do things to cope and survive when traumatic events occur, but they are not you and did not go through exactly what you did. As a result, it’s up to you to find the beliefs that work for you and the ways of dealing with your trauma that ultimately result in you having more energy, allow you to look at life in a more positive manner, inspire you to move forward, and enable you to tap into your unique gifts that you can share with the world.

4 comments on “From Interest Rates to Insights - Feel to Heal”