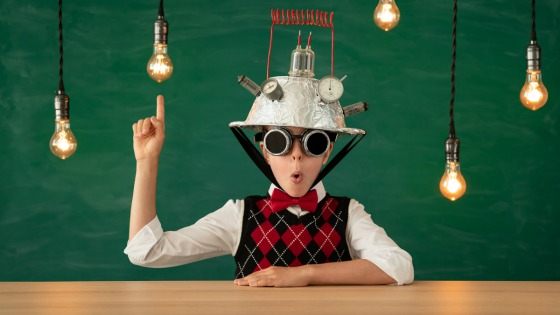 With July 4th having just passed I thought it would be inspiring to talk about inspiration. The United States is unique because it is a nation founded on inspired ideals versus population characteristics and geography. These ideals are centered around life, liberty, and the pursuit of happiness as well as the notion that all men are created equal. Obviously we’re still very much a work in process but ideals are perfect states. They are something to strive for but unattainable in their purest form. All we can do is work on progressing towards the ideal state and be open and honest about our shortfalls and try to correct them.  The details of how those ideals would be fostered and protected came through the Constitution but the motivating force was the yonder star of powerful ideals that has propelled the nation forward in remarkable ways by unleashing human ingenuity over the last 244 years.

Is Inspiration Out of the Blue?

I read a fascinating article about inspiration in the Harvard Business Review that was written in 2011 and is largely based on the work of two psychologists Todd M. Thrash and Andrew J. Elliott. Oftentimes people think of inspiration as something completely out of the blue almost as if it’s a result of divine intervention. I’ve heard musicians like Gregg Allman say that the song wrote him versus him writing the song. His great song Midnight Rider came out of the blue but required the aid of one of the band’s roadies to complete. The story of the song is quite entertaining and worth reading about.

Bob Dylan touches on how some of the songs on his new album came from inspiration. This is what Dylan says in a recent interview in the New York Times.

On the album “Tempest” you perform “Roll on John” as a tribute to John Lennon. Is there another person you’d like to write a ballad for?

Those kinds of songs for me just come out of the blue, out of thin air. I never plan to write any of them. But in saying that, there are certain public figures that are just in your subconscious for one reason or another. None of those songs with designated names are intentionally written. They just fall down from space. I’m just as bewildered as anybody else as to why I write them.

He answers another question in a similar vein with the following:

It’s one of those where you write it on instinct. Kind of in a trance state. Most of my recent songs are like that. The lyrics are the real thing, tangible, they’re not metaphors. The songs seem to know themselves and they know that I can sing them, vocally and rhythmically. They kind of write themselves and count on me to sing them.

From a personal standpoint I have definitely had epiphanies that have changed the course of my life in terms of the direction it has taken, how it’s influenced my kids’ directions as well, and some of the key business decisions we have made at CWS that have positively impacted our trajectory. These insights/inspirations have led us to focus on variable rate loans and how we have raised capital, from whom, and how it was used such that it enabled us to scale the business to take advantage of many compelling opportunities.

A great business example of inspiration coming into play recently relates to the pharmaceutical company AbbVie. AbbVie developed the most successful drug in history, Humira. It generated unbelievable profits for the company. It became a victim of its own success, however, as it came to generate over 40% of the company’s revenues and it was facing competition due to patent expirations. The stock dropped nearly 50% between February 2018 and August 2019 as investors became spooked that the company’s revenues would fall off a cliff. It didn’t matter that there was still a few years left of tremendous revenue generation and profitability from Humira before intense competition kicked in. Investors were looking beyond that. How would the company overcome such a loss of profitability? In what I think was a brilliant insight that wouldn’t surprise me if it came from some kind of inspiring catalyst, the company went on the offensive and entered into an agreement to buy Allergan after its stock had fallen quite a bit as well. This is what CEO Richard Gonzalez said about the acquisition.

“We’re not betting on the pipeline,” Gonzalez said, noting that Allergan’s assets add between $10 billion and $15 billion in “durable” revenue and offset declines from Humira.

“Essentially, Humira is buying the assets that will replace it in the long term,” he added.

When I read that last statement after the merger was announced I was floored at how brilliant and deceptively simple the strategy was. Now don’t get me wrong, I know that acquisitions are fraught with peril and usually don’t work out well especially large ones, but this one seemed to make so much sense. Humira still had billions of revenue that it was going to produce over the next few years. Rather than just milk that, why not use those dollars to buy a new source of revenue that can replace it and create a springboard for more growth and revenue diversification? And it could do this without much shareholder dilution. In addition, it wasn’t like Humira was going away. It was still going to be a blockbuster and probably not drop off as badly as investors were pricing in. And if it did, then the company was no longer going to be reliant on it anyways. It seemed like heads I win and tails I win provided the integration of the merger could be handled competently. What an insight! The stock has since gone up about 50% from the 2019 lows as investors started to buy into the strategy after some initial skepticism so it seems like the inspiration has already paid off for investors who came in over the last year.

Can You Prepare Yourself for Inspiration?

Back to the HBR article. The key question is whether one can prepare oneself for inspiration. That seems like a silly question since inspiration seemingly comes out of the blue so the more you try to prepare the more your analytical mind gets in the way which makes inspiration that much more difficult to attain. So now we know one way to be better prepared. If you can let your intellectual/analytical guard down, then that’s a good first step. One needs to be open to new experiences and expose oneself to stimuli in all aspects of life to improve the odds of this happening.

Let’s assume we’re open-minded and like to take in stimuli in the arts, nature, from other people, sports, etc. What are the key attributes of inspiration? It’s spontaneous, powerful, and generates clarity via a new insight as well as purpose and action.

First, inspiration is evoked spontaneously without intention. Inspiration is also transcendent of our more animalistic and self-serving concerns and limitations. Such transcendence often involves a moment of clarity and awareness of new possibilities. As Thrash and Elliot note, “The heights of human motivation spring from the beauty and goodness that precede us and awaken us to better possibilities.” This moment of clarity is often vivid, and can take the form of a grand vision, or a “seeing” of something one has not seen before (but that was probably always there). Finally, inspiration involves approach motivation, in which the individual strives to transmit, express, or actualize a new idea or vision. According to Thrash and Elliot, inspiration involves both being inspired by something and acting on that inspiration.

Inspiration involves both being inspired by something and acting on that inspiration. - Thrash and ElliotClick To Tweet

When we can catapult out of our egos, small-minded needs, and selfish desires to a much larger vision that is more selfless and is centered in beauty and goodness we can then position ourselves for a powerful awakening. This can create clarity that lets us see what we couldn’t see before and motivates us to put this vision into action for a greater good.

So the macro is to think in terms of possibilities and the greater good that leads us to feel more expansive and alive. We then need to team that up with the micro which requires a mastery mindset. People prone to inspiration have a mastery mindset that has them go deep into their domain to learn as much as they can so that it becomes part of them in many ways. This desire for more depth emanates from an intense curiosity and interest versus a desire to attain wealth or material goods. Those are a byproduct of mastery but not the focus of it. In addition, inspired people don’t need a lot of external validation and are primarily competitive with themselves through their intrinsic motivation and desire to continuously improve and grow. They are also more positive and optimistic people with a high degree of self-esteem and belief in their abilities. Interestingly, mastery comes before inspiration and not vice versa as it favors the prepared mind. Prepare the mind first through focus, concentration, depth, and a deep interest in a particular domain and then this will make it more receptive to inspiration.

Inspired people are more successful at attaining their goals since there is almost a higher calling in what they are pursuing.Click To Tweet

Inspired people are more successful at attaining their goals since there is almost a higher calling in what they are pursuing. This translates to more inspired goals that make pursuing them and sticking with them until they are accomplished more motivating than those without such inspiring goals. This carries over to having more purpose in life and feeling more gratitude.

Their focus, commitment to their craft, and effort often result in them surrounding themselves with people who can make them better and in turn, the inspired person makes those on his or her team better as well. It’s a virtuous circle and creates a self-selecting group that attracts highly motivated people and keeps those who don’t share the same commitment out or they don’t last very long if they do make it in and don’t work out.

The best way for me to sum up inspiration comes from a song I quote often. It’s Scarlet Begonias by the Grateful Dead.

Once in awhile you get shown the light

In the strangest of places if you look at it right

You never know when inspiration will strike but if you can put yourself in a position to have it occur, to be able to recognize it, capture it, and act on it, then not only will your life be that much more fruitful and rewarding, but the world will be better off for it as well.