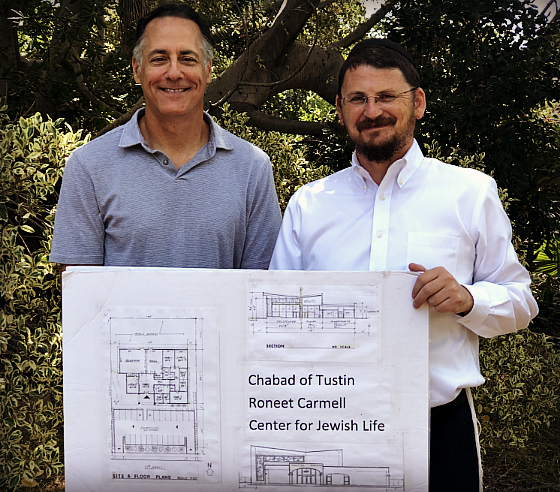 This post is designed to share with you the rationale as to why I have taken the lead to fund the purchase of the land and construction of a synagogue and community center in Tustin, California that will be called the Roneet Kimeldorf Carmell Center for Jewish Life. I know people are busy and don’t always have the time or inclination to read long blog posts.

Roneet embodied everything this new center is going to represent: community, kindness, celebration, tears, family, faith, tradition, and powerful memories. The land purchase was finalized and the journey continues and we need your support.

Since Roneet’s passing, I have embarked upon a few different philanthropic endeavors to honor her memory. This one is by far the most ambitious in terms of the financial commitment and legacy that it will create.

So why did I want to take on a significant role in this?

In addition to being a huge fan of the Rabbi and his extraordinary dedication and commitment to Judaism and creating a place of warmth and welcoming to anyone in the community that wants to worship and signify important Jewish milestones in their lives, I thought that it would be so symbiotic with who Roneet was as a person and what she would want her legacy to be. I could also envision some years from now kids running around in the playground while their families attend services as well as picturing families having Bar and Bat Mitzvahs for their kids there and being so proud and experiencing such joy. That is what filled Roneet. Family, friends, and living joyfully, especially during traditional Jewish events. 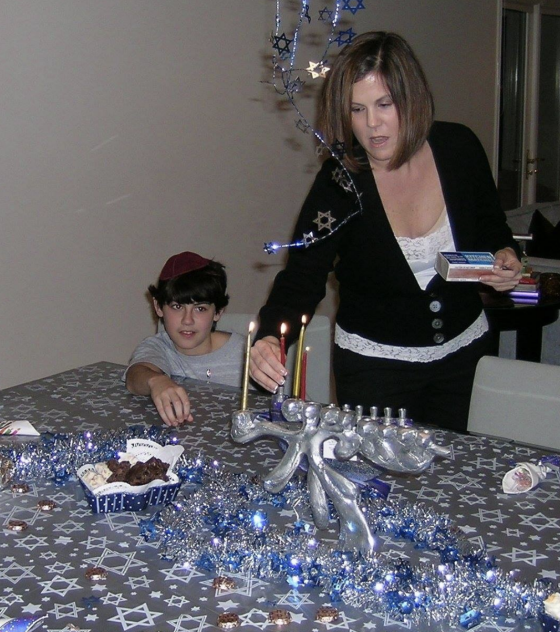 A key to our marriage being successful was our sharing of the same values and how we derived enjoyment out of life. One of the things I’m most proud of is that we did a very good job of balancing our short-term needs and desires without losing sight of or compromising our long-term goals and objectives. We lived for today while also planting enough seeds so that we could provide for our kids, ourselves, other family members, while also being able to contribute philanthropically. 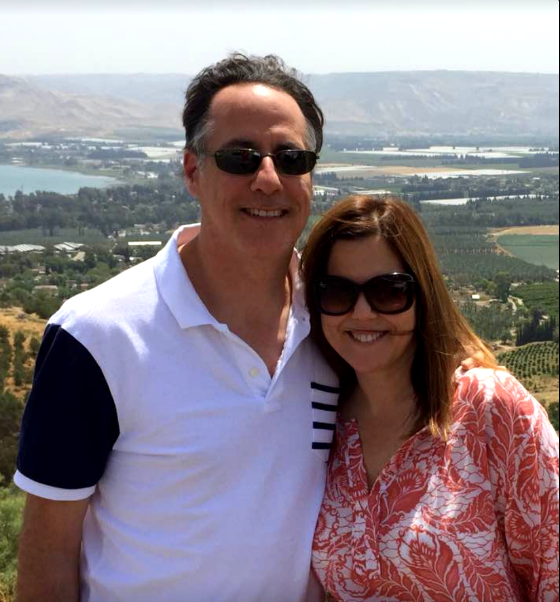 Gary and Roneet Carmell At the Sea of Galilee

One of the reasons we were able to accomplish this is because we were consistent and disciplined and maintained a stay the course approach to life. This consistency, along with calculated risk-taking, allowed us to compound experience and capital which generated dividends in the present and for the future. Roneet and I were together for over 30 years, I have been with CWS for 32 years, and we lived in the same home for 18 years and in the same area for 28 years. We stayed the course in our relationship, my career, and hers as well until we had kids. She worked for Nordstrom for 10 years and she was a superstar. This consistency is pretty unusual in today’s frenetic world. What was the source of it for us?

I think a key influence in this stable approach to life comes from our Jewish background as well as the values of our parents and grandparents. I will focus on the Judaism aspect in this post. It’s the first monotheistic religion and it is has proven its resilience for over 4,000 years under some of the most trying circumstances, which sadly some are still present to this day. Despite incredible obstacles and setbacks, such as the destruction of the first and second temples, the exile and diaspora, Roman conquest, Spanish expulsion, pogroms, the Holocaust, culminating in the murder of 6 million Jews, and perpetual anti-semitism, the Jewish people came to realize that the only way they could survive was to live from a set of values and core ideals rooted in a belief in a God that held them to a higher standard and calling and with that came the burden of taking on more challenges than other people.

Leo Tolstoy said this about the Jews:

He whom neither slaughter nor torture of thousands of years could destroy, he whom neither fire nor sword nor inquisition was able to wipe off the face of the earth, he who was the first to produce the oracles of God, he who has been for so long the guardian of prophecy, and who has transmitted it to the rest of the world—such a nation cannot be destroyed. The Jew is as everlasting as eternity itself.

As a result of this covenant and faith, they would not let the circumstances of the present derail them from the prospects for a better future. They also knew that they had to invest in themselves and their capabilities so that they would not have to rely on others. This is why the state of Israel is so remarkable. The fact that it has survived and is so strong and productive, despite so many who would like to wipe it off the face of the earth, and has done so many remarkable things in terms of its ingenuity for the rest of the world, is a testament to the ideals of Judaism and the importance of investing in human capital. It speaks to the power of the human spirit when endowed with powerful values and it’s only through obstacles and challenges that we find the courage, creativity, ingenuity, fortitude, commitment, and discipline to rise above, grow from them, and become stronger as a result. The following sums this up so beautifully. It’s from Rabbi Jonathan Sacks’ book A Letter in the Scroll: Understanding Our Jewish Identity and Exploring the Legacy of the World’s Oldest Religion

Freedom, Moses suggested, is won, not on the battlefield, nor in the political arena, but in the human imagination and will. To defend a land, you need an army. But to defend freedom, you need education. You need families and schools to ensure that your ideals are passed on to the next generation, and never lost, or despaired of, or obscured. The citadels of liberty are houses of study. Its heroes are teachers, its passion is education and the life of the mind. Moses realized that a people achieves immortality not by building temples or mausoleums, but by engraving their values on the hearts of their children, and they on theirs, and so on until the end of time.

The Israelites built living monuments—monuments to life—and became a people dedicated to bringing new generations into being and handing on to them the heritage of the past. Their great institutions were the family and education via the conversation between the generations. In place of temples they built houses of prayer and study. In place of stones they had words and teachings. They saw God not as the power that enslaves but as the power that sets free. Instead of worshiping mighty rulers they affirmed the dignity of the widow, the orphan, the stranger, the vulnerable, the weak and the neglected. In that counterintuitive reversal they discovered the secret of eternity. Whether through accident or design or something greater than either, the Hebrew slaves who built Ramses’ temples had lived through one of the great revelations of history. These were our ancestors, and we are their heirs.

I think that is what makes Judaism unique and is something that I am hoping to perpetuate with the building of this new place of prayer, study, and community. It is the idea that we are created in our maker’s image to help heal the world by bringing kindness and goodness to others. Everyday acts are sanctified because that is where the real work of life takes place: on the ground between everyday people struggling to make ends meet and managing through the stresses and vicissitudes of life. It’s through offering a helping hand to others in everyday tasks that we can cumulatively make the world a better place and generate a love and awe for God that can help those doing good deeds to see the oneness of everything. Roneet was the embodiment of this as she not only lived for the moment, but also had incredible ideals and values, and a very strong moral code which would allow her to keep her eye on the big picture and the long run. She had an uncanny ability to see how decisions made today could have consequences far down the line. And yet, her heart could forgive and she was so kind and compassionate. She truly felt the pain of others and gave of herself in every interaction.

When we were together we would take risks in terms of investments and houses that we bought or maybe even stretching for vacations and the education of our kids. We would get a little ahead of ourselves financially at times. And yet it wasn’t too big of a risk because we had faith in our abilities and we had enough visibility such that the future would bring future gains to return the cash outlay we were making that enabled us to enjoy the present.

I am taking a similar approach with my participation in this endeavor. It’s a big financial commitment and it’s not something I am bringing up to brag about but to show how it’s consistent with our philosophy and how we lived our lives when we would be getting a little ahead of the situation but doing so in the context of looking at the very long term. Roneet was the embodiment of doing good deeds for others and bringing people together and connecting them. With this new synagogue and learning center, we will have the potential to do the same to bring children and families in the community together to worship, learn, celebrate monumental life events, and to experience the totality of life.

I am honored to play my part to help bring people together in ways that Roneet did so naturally and joyfully while she was alive and will continue long after I join her in eternity.

Would you like to join me in honoring Roneet? Donations would be appreciated. Thank you.