The Media, Earthquakes, and Market Crashes 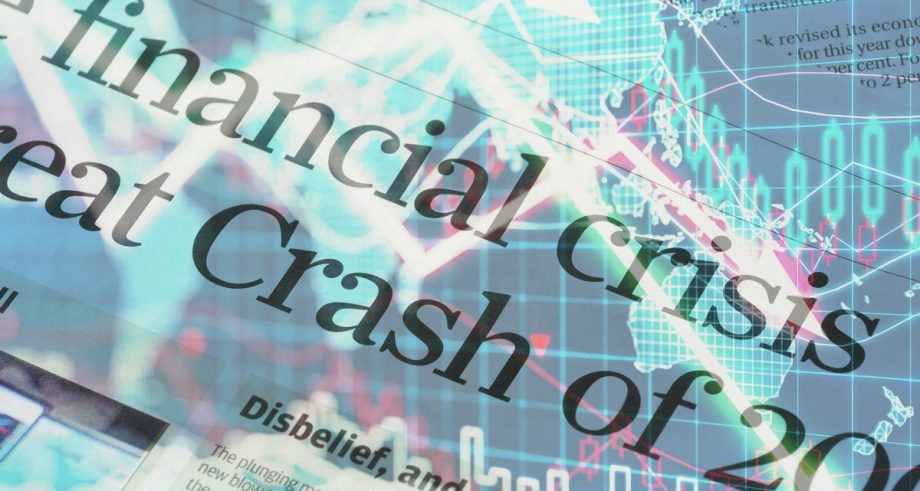 I have written before about how investors overestimate the probability of extreme negative outcomes. The author of the study I referenced in that blog post has teamed up with his famed Yale colleague Robert Shiller and another professor and published a new working paper called Crash Beliefs from Investor Surveys. Since 1989 Robert Shiller has published his Stock Market Confidence Indices which are based on survey data collected semi-annually for the first decade and then monthly by the International Center for Finance at the Yale School of Management since July 2001.

The following question is asked of high net worth and institutional investors each month with a sampling goal of 20 to 50 responses by each type of investor:

“What do you think is the probability of a catastrophic stock market crash in the U.S., like that of October 28, 1929 or October 19, 1987, in the next six months, including the case that a crash occurred in the other countries and spreads to the U.S.? (An answer of 0% means that it cannot happen, an answer of 100% means it is sure to happen.)

The historical frequency of such events over a six month period using the most conservative bounds between October 23, 1929 and December 31, 1988 results in an average probability of an extreme crash of 1.7%. When the entire history of the Dow Jones Industrial Average is used this declines to 1%.

The following chart shows the historical survey results from institutional and individual investors overlaid with the maximum daily decline for the year (expressed as a positive percentage) and annualized volatility. 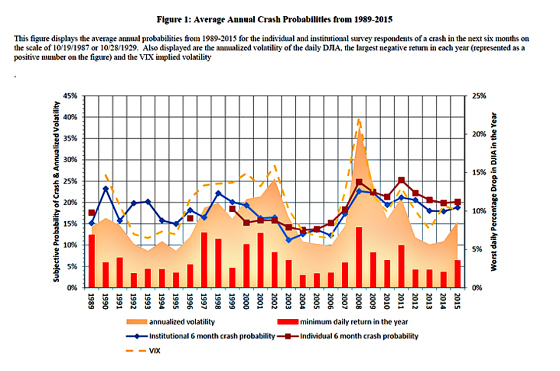 The average reported crash probability from the survey is over 10 times the conservative estimate based on historical data. Thus, it is incontrovertible that investors’ subjective probabilities of stock market crashes are much, much greater than the probabilities derived from historical data covering approximately 60 years. Once this excess fear of crashes had been established, the researchers then wanted to know what impact the media might have on investor survey results.

To test whether the media has had an effect on investor survey responses, the authors did ProQuest searches for the Eastern Edition of the Wall Street Journal for the period for the questionnaire sample (1989-2015). That was the only edition available for the sample period and the assumption is that it corresponds well to the national edition. They searched articles containing words and phrases associated with a stock market boom or crash.

Research has shown that humans give more weight to negative things, experiences, and events which led the authors to expect that

“(1) negative news is more prevalent in our sample of crash and boom related terms, and (2) the availability bias – if it exists – should be asymmetric. Negative events and terms should have a greater effect on probability assessments than positive events and terms.”

Interestingly, the percentage of positive articles is slightly higher than negative ones during the sample period and is not statistically different from the percentage of positive DJIA days (52%). Not surprisingly negative returns in the prior day(s) are associated with significantly higher negative article counts and vice versa. There is more persistence with regard to the association between returns and negative media responses (up to seven days subsequently) while positive article counts have a shorter shelf life of between one and two days.

Interestingly, but probably not so surprising upon reflection,

The paper then focuses on its main research focus: whether the media influences the crash probabilities from the surveys. Their findings show that the responses of individual investors “are significantly associated with negative media valence during market downturns, while the same does not hold for positive media valence during market upswings.” This only applies, however, to negative articles appearing on the front page as those appearing elsewhere do not have statistical significance. From an institutional investor standpoint, there was no statistical evidence showing they are impacted by negative news. For both sets of investors, however, positive news was associated with a decrease in crash probabilities.

Finally, the authors wanted to test the theory that negative exogenous events might have an impact on subject probabilities regarding future stock market crashes over the next six months. They did this by tracking earthquakes and correlating these to the responses of those investors in the same zip code. The authors believed that these would have an impact as other research has

So there you have it. Individual investors are indeed much more influenced by the media and exogenous events in terms of extrapolating these, when they are negative, to higher future market crash probabilities. This is not the case with institutional investors. Regardless, however, both groups significantly overweight these events in terms of assigning probabilities relative to the historical evidence. Markets truly climb a wall of worry and with this bull market being one of the most hated in history, it’s possible it has a lot more runway for going higher.

Are you influenced more by the media than by exogenous events? How does it impact you as an investor?