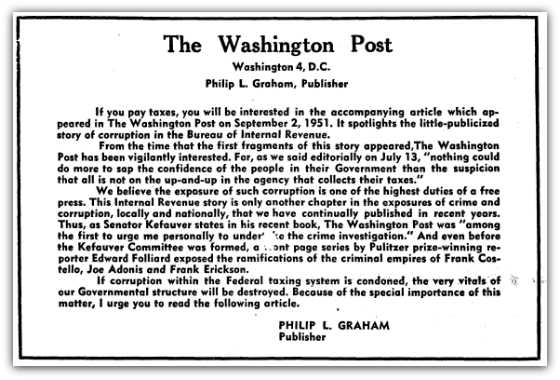 The scandal surrounding the Internal Revenue Service and its seeming singling out of conservative, smaller government groups is understandably and deservedly getting a lot of media attention. It confirms everyone’s worst fears about government power used for political purposes to attack perceived enemies and sends a chill down the spines of those who believe in free speech and the right to exercise it. Given the theme of this blog is that there is very little new under the sun, it’s not surprising to learn that this is not the first time a headline-grabbing scandal has put the IRS front and center. The Washington Post, yes the same newspaper, that broke the Watergate cover-up, ran a pretty glaring expose about the corruption that was running through the IRS in an article that was published in September 1951 that is shown above. Here is a summary of what was brewing back in 1951:

A political scandal of as yet unknown proportions has been breaking piece-meal across the United States for the last year. It involves corruption in the Treasury Department’s Bureau of Internal Revenue, and as such, it contains a high potential of public indignation. Taxes are high and most people are paying them. Unsavory conditions in the bureau have cropped out in four widely separated areas, and last week Sen. John J. Williams (R-Del.) said it was time to start checking on the bureau’s headquarters in Washington. Generally, charges against bureau officials have involved such matters as the shakedown of persons in tax difficulties, connivance with racketeers, failure to prosecute tax fraud cases where underworld big shots were concerned and accepting fees from firms under the official’s jurisdiction.

Along with this, there has developed a pattern whereby top brass of the bureau has apparently covered up for lower officials under investigation.

CLOAKED BY LAW
Officials of the Bureau of Internal Revenue, who collect more than 50 billion dollars yearly from American taxpayers, have worked for many years behind something comparable to an iron curtain. This is not a condition of their own choosing. It is required by law. But today, this iron curtain is being penetrated by three Federal grand juries and two congressional committees.
In less than six months, three regional Internal Revenue Bureau collectors have either resigned under fire, been arbitrarily replaced or fired. The organization’s chief, Commissioner George J. Schoeneman, has resigned for reasons of health. Assistant Commissioner Daniel A. Bolich requested reassignment for the same reason.The chief field agent In charge of 32 Internal Revenue offices in northern California is under indictment for conspiracy to defraud the Government by obstructing the collection of taxes. His name is Ernest M, “Mike” Schino. 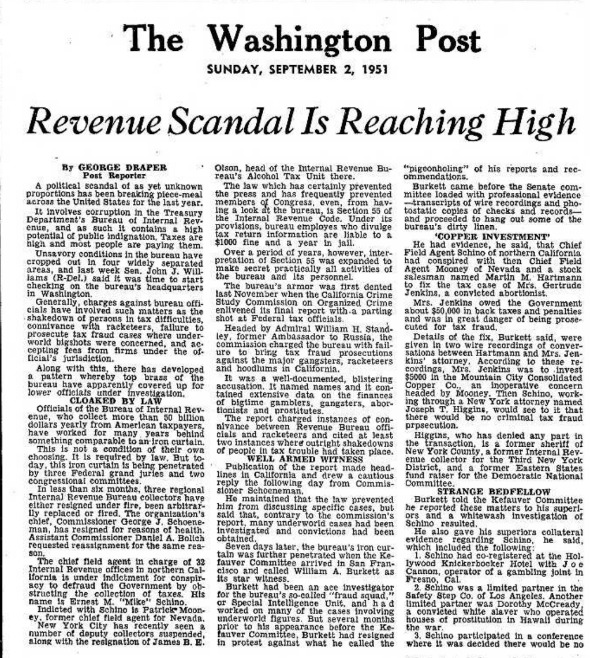 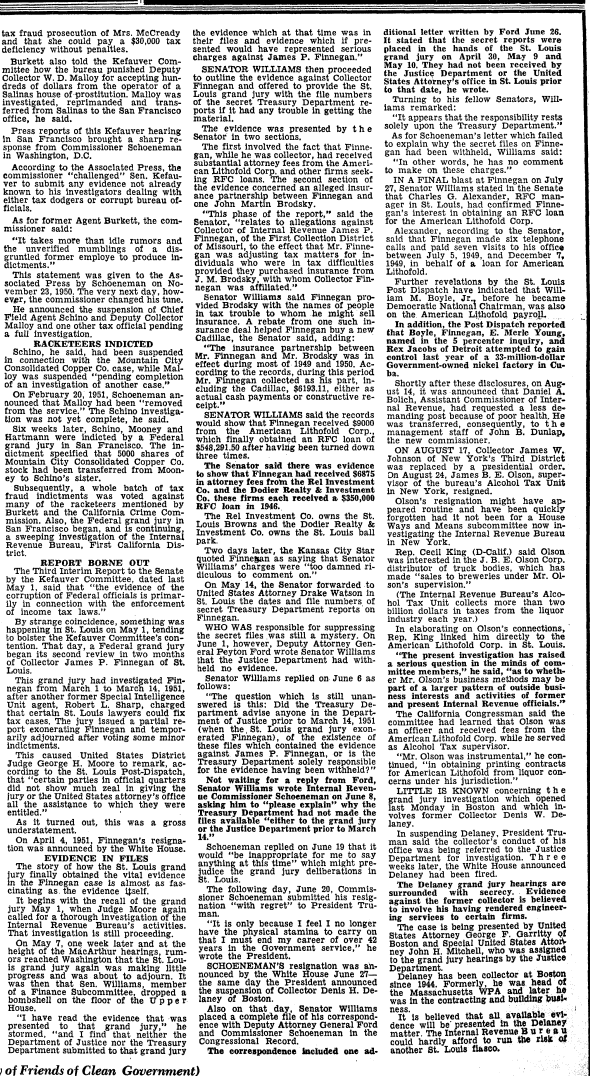