I thought I would focus this week’s blog on things that have recently caught my attention in the news.

In Case You Missed It – In the News

I go down to Speaker’s Corner I’m thunderstruck

They got free speech, tourists, police in trucks

Unlike one of the two people proclaiming their Jesus, it is possible that both Sam Zell and Barry Sternlicht are both right in the $5.3 billion sale/purchase of 23,000 Equity Residential apartments in Florida, Seattle, Denver, and Southern California. Zell famously sold his office REIT, Equity Office Properties, at the top in 2007 to Blackstone and other buyers so it’s natural to assign similar Nostradamus-like powers to Zell again. This time, it’s apartments he’s selling. I think the sale makes sense for EQR as it gets to monetize high demand assets in markets that are no longer core for them, take some chips off the table via a special dividend to investors, and tighten its focus. For Starwood, it is a large transaction and enables them to purchase plenty of assets with a bright future in growing markets. As Barry Sternlicht of Starwood said,

“You look at the world and there’s no inflation and there are no yields anywhere,” Sternlicht said in a telephone interview. “We’re not underwriting massive rental growth, just fairly steady growth above inflation.”

I agree with Sternlicht. I also understand why EQR did what it did.

This article on Boomberg.com caught me a bit by surprise, but it makes sense upon further reflection and could serve to cushion the negative impact of lower oil prices on Texas. Big oil has had an increasingly terrible track record of going dramatically over budget and taking longer to develop large oil fields. This probably sounds familiar to people doing remodels on their homes. Instead of trying to hit the home run they are realizing the odds of success are very low and that the only margin of safety they have is if oil prices are $80+ for long periods of time. Instead, they’re going for the lower hanging fruit of shale production.

• China Now Allows for Families to Have Two Children

Before everyone gets excited about the change in China’s 35 year one child policy, I suggest people read this article from FT Alphaville. They make a strong assertion that China’s fertility rates will converge with other Asian countries that do not have government restrictions and are lower than China’s. So maybe the sell-off in Japanese condom makers on the news was a bit overdone.

When short-term interest rates rise above long-term rates, the U.S. economy almost always enters a recession within the next 12 months. With short-term rates at close to 0% because of Fed policy, an inverted yield curve is practically impossible as long rates won’t go negative. I read an interesting article about whether bonds are throwing a curveball which looks at alternative measurements that suggest the economy is pretty weak and could be signaling recessionary conditions.

The author makes a compelling assertion that when banks earn a large spread on the money they invest that this is good for the economy because this should lead to more lending and economic activity. The opposite is the case when their Net Interest Margin is low and can lead to recessionary conditions. 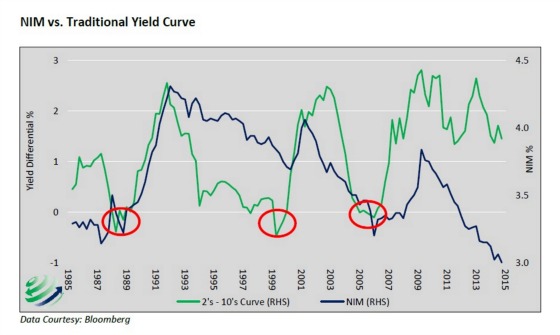 The Net Interest Margin and spread between 10-year and 2-year Treasuries track pretty closely but has broken down more recently as the Fed has kept short-term rates near zero. If history is any guide then the very low Net Interest Margin suggests economic weakness ahead.

Tim Ferris, who wrote The Four Hour Work Week, has great interviews via his podcasts. I recently listened to one he did with Scott Adams of Dilbert fame and enjoyed it very much. I highly recommend listening to many of the other ones Ferris has carried out as he goes deep with the people he interviews about what has made them so successful, their habits, influences, and sources of inspiration, just to name a few of the key areas he covers.

• The Most Riveting Interview of the Week 🙂

Check out this interview. It will make you want to immediately buy this person’s book. And for those of you who have read it already and would be inspired and inclined to write a review on Amazon that would be greatly appreciated!

Have a wonderful week!

What caught your eye in the news this week? Did you have a favorite news item that may be of interest to me?