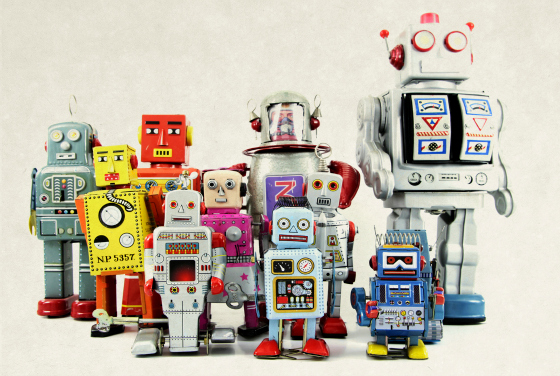 I must admit that I was struggling to find the motivation to do this week’s post after three straight weeks of travel and a particularly busy seven days that included late-night business dinners for a number of them. Woe is me. I only bring it up because all of us face those times when we don’t want to do something and yet after we do it we inevitably feel better about having taken on the challenge.

Charlie Munger has said he always likes to focus on doing the most difficult things first and by having done so he has been able to build up somewhat of a fearless mindset. It’s not that he doesn’t get fearful, it’s just that he doesn’t let fear get in the way of what he knows needs to get done.

The poet David Whyte has referenced being burdened by what we know needs to be done in his poem The Faces at Braga.

It begins as follows:

If only we knew

as the carver knew, how the flaws

in the wood led his searching chisel to the very core,

we would smile too

and not need faces immobilized

by fear and the weight of things undone.

Nothing is more immobilizing than fear and being burdened by what’s on our to-do list. And yet, as well all know, the only way out is through. David Whyte turns it around and says it’s actually the mistakes and the unexpected that can lead to gloriously surprising and beneficial outcomes. And if we adopt this mindset we can approach life more fearlessly.

Being Robotic to Overcome Challenges

I read something the other day that helped me in terms of getting more fired up to do this blog. Paradoxically it was one of the least motivating motivational tools used by the co-founder of Evernote (my favorite app) from a very young age. What does he do to muster the strength to deal with challenges? He pretends to be a robot. Yes, you read that right. Robots do what they’re programmed to do, no questions asked, and we can learn a lot from their approach and effectiveness They don’t let human frailties get in the way of doing their job and what needs to get done. Thus, to overcome human weakness, the secret is to pretend that we’re not human! Of course, this is easier said than done but potentially great advice nonetheless. Rather than needing to fire ourselves up, it may be more effective to drain away all emotion and trepidation and just do what Sam Walton famously did when describing one of the keys to Wal-Mart’s success:

“We just got after it and stayed after it.” ~ Sam WaltonClick To Tweet

Now on to my favorite subject: interest rates. The jobs report came out and the employment numbers were quite impressive and exceeded the estimates of most analysts and economists. Long-term interest rates went up fairly sharply on Friday, but they have also been going up since mid-October when the 10-year Treasury closed at 1.99%. It closed at 2.33% on 11/6/15.

Interestingly, however, for the last few years, November has produced very high job numbers, only to see them drop in the subsequent months as the following graph shows (thanks to Warren Mosler for bringing this to my attention). 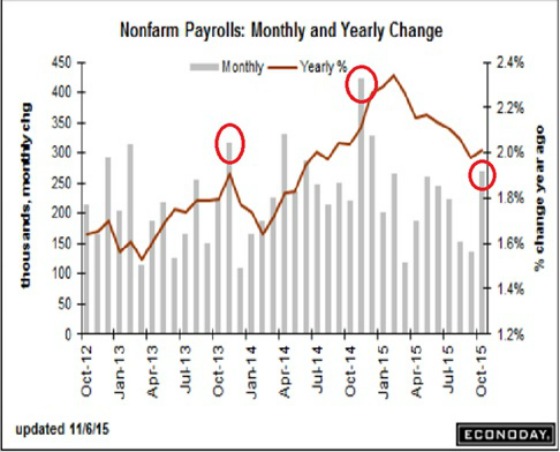 This is obviously encouraging for the economy, although it is important to see how the next few months turn out given the recent trends of deceleration post-November. It now appears that the Fed has sufficient cover to begin raising rates and the market is now pricing this in with more certainty. I do still remain in the camp, however, that we will not see rates move materially higher. I wanted to show a couple of graphs to help illustrate why I believe this to be the case.

I am a big fan of Seeking Alpha which is a great website that aggregates opinions and research from thousands of investors. It’s a treasure trove of information and occasionally there will be some nuggets of information and great analysis for those who dig deep enough. I read an article on there recently that analyzed private U.S. debt over long periods of time. The first chart shows how it has grown steadily since 1954.

As this chart shows, with the exception of the Great Recession and corresponding mortgage crisis, private debt has grown steadily over the last 60+ years. For growth to occur there needs to be some aspect of the economy that is spending more than it’s earning in order for the overall economy to keep expanding. During recessions, the government typically steps up with large deficit spending when the private sector is cutting back. During periods of economic growth, however, the government sector typically remains in deficit, but much less so than in recessions, and the private sector goes more into deficit mode, particularly corporations as they invest in plant and equipment. These two areas of deficit spending are offset somewhat by the U.S. almost always running trade deficits. The point is not to give an in-depth lesson in economics and capital flows but to convey that overall debt needs to be growing to generate increased economic activity. Given this, it is then more important to look at the growth rate of private debt versus the absolute level to get an understanding of how this may impact economic growth, job creation, and interest rates.

Here is that chart:

For me, this is one of the most informative charts in terms of conveying why interest rates have been dropping for 30+ years. The chart clearly shows that the peak growth rates in private debt keep drifting lower while the troughs are doing the same as well. In my mind, this speaks to more of an aging, risk-averse society despite what we read about with regard to the financial sector and corresponding leveraged buyouts, dividend recapitalization, mergers and acquisitions, stock buybacks, etc. Or, perhaps it’s such aggressive financial activity that is leading corporations to spend less on expanding their productive capacity and the resulting historically low share of GDP claimed by labor’s output that is exacerbating these trends.

In theory, low-interest rates should stimulate more demand for borrowing but this is not the case as low rates are not leading to more rapid growth in private debt creation. It is quite muted and the trends would suggest that low rates are in response to relatively weak demand and that there is a strong likelihood this will continue as our society ages and increases its focus more on savings, safety, and income generation than risk-taking and spending. In addition, if society continues trending towards less of an emphasis on homeownership and more on renting, then this will serve to lower economic output than would otherwise be the case because there is less labor content and more efficiency in the construction of apartments given their higher density and smaller size than single-family homes. This translates to less borrowing as a result of not as much need for furniture and other items given the smaller average size.

I have long thought that Japan is the canary in the coal mine for the aging, industrialized world in terms of the long-term trend of lower growth and correspondingly low-interest rates as a result of a rapidly aging society. To put his in context, short-term rates in Japan have been less than 1% since 1995. The following graph from The Atlantic in 2014 shows how Japan’s private debt has been dropping fairly significantly since the late 1990s and, as a result, GDP has essentially remained flat and has only tread water because the government has stepped in with deficit spending to fill the hole left by the private sector’s desire to save.

The demographics of the United States are not nearly as poor as Japan’s. Nevertheless, I think that there are some structural headwinds to persistent and meaningfully higher rates despite the strong jobs report and the much higher likelihood the Fed will move off 0% short-term interest rates.

I began the post by talking about the benefits of being robotic in terms of overcoming challenges. If we can then shift to our higher level of thinking that only humans can do to draw important insights and then turn robotic again to drown out all of the cacophonies of uninformed noise and opinions and follow the well thought out path, then not only will be more productive but we should be better investors and more centered and peaceful human beings.

When motivation is an issue how do you perform those essential tasks? What did you think of the interest rate tie in?

2 comments on “Monday Motivation, Being Robotic and Interest Rates”