Anger - A Great Source of Insight 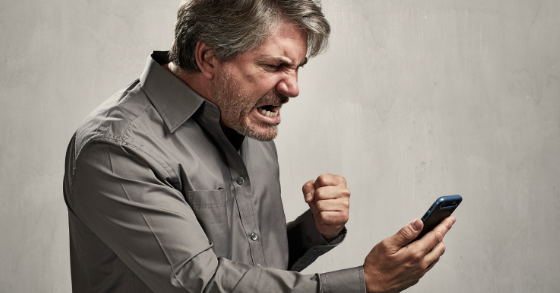 As investors (and human beings) it’s almost always best to keep our cool and not let others or ourselves get the best of us. When we lose our center and become consumed by emotion set off by powerful triggers, mistakes happen and we often come to regret our actions and the consequences they unleash. With this in mind, I thought I would share with you the basis of a presentation I had the pleasure of listening to at a conference I attended last week.

The conference was put on by a firm with whom we have done business over the years. It was the third conference I had attended of theirs and I’m always impressed by the attendees, speakers, the venue, and how well organized it is. This is no accident as the principal of the firm is a fanatic (in a good sense) and takes the planning of it very seriously and is very detail oriented. He has built a great company, one whose stock has doubled since November, he is exceptionally bright, extraordinarily well-connected, and a hard driving visionary. He’s also a fanatic about exercise and it shows. After only a few minutes of talking with him, one can pretty easily figure out that he is definitely a very Type A personality. Thus, it was quite a surprise when he deviated from his typical subjects of real estate, the economy, capital markets, and trends in the apartment industry to focus on a much more courageous and vulnerable personal presentation.

The Impact of Anger

He spoke about how important image is to him, especially one of a happy, cohesive, loving family. And yet, as is so often the case with many of us, there is often much more than what appears to the naked eye. Behind the scenes, his relationship was deteriorating with his wife to the point where they chose to separate and were heading down the road towards a divorce. The principal reason? His anger. Or, more precisely, his inability to control his anger. After reading a book his wife asked him to read (2nd request) he finally was open to the idea of doing so. It was akin to the old saying that:

“When the student is ready, the teacher will be found.”Click To Tweet

From the introductory questionnaire, he knew that he had deep seated anger issues and the management of them. After doing a lot of personal work and analyzing what would trigger him he realized that much of it had to do with expectations. If life didn’t unfold the way he wanted it to then he would lash out at those he thought were at fault and responsible for his disappointments. Because he thought that the security line at the airport should only take 10 minutes, that gave him the ability to leave home one hour before the departure of his flight. Unfortunately, when the line turned out to be much longer, he was at risk of missing the flight and this triggered a great deal of anger within him such that he would take it out on the TSA workers and his fellow travelers. He would also take his anger out on his wife. He came to learn there were real consequences to his inability to control his anger.

He also came to learn that he can have expectations but he must be prepared to accept the consequences of them not being met. When it came to going to the airport he could leave earlier or be prepared to miss his flight if he wanted to stick to the one hour time line. The choice was his and nobody else’s.

Awhile back I read the book The Surprising Purpose of Anger. The author talks about how our anger can offer us great insight into our psychological state and where our vulnerabilities are.  None of us is immune to getting angry. Where we differ is whether we process it in a healthy or unhealthy manner. The one thing we shouldn’t do is repress it because it will then ultimately manifest itself in very unhealthy ways and often times in explosive outbursts that can be extreme relative to the circumstances. Repression tends to result from thinking something is wrong with us and the self-judgment that goes with it. Eventually the self-loathing becomes too much to bear and we eventually explode. Of course, we never want to get to that point so it’s important to pay attention to when anger is building up in us. The author says that anger can be an important warning indicator.

“I sometimes refer to anger as similar to the warning light on the dashboard of a car-it’s giving you useful information about what the engine needs.”

According to the author, anger arises from having unmet needs. This goes a little deeper than unrealistic expectations or expectations at all. Perhaps the presenter’s unmet need is having to always feel in control. And his expectations were not met because he had a need that could not be met. All we can do is control our actions and try to influence those of others. But at the end of the day, much of what we hope to control in life is really out of our hands.

Triggers of Our Anger

If we can identify the triggers of our anger and separate them from the cause, we can go a long way to defusing it. Don’t judge what triggers us, look within and ask why we are reacting the way we are. Don’t take it out on the TSA workers. Look within.

The author contends that:

“[A]nger is the result of life-alienated ways of evaluating what is happening to us, in the sense that it isn’t directly connected to what we need or what the people around us need. Instead, it is based on ways of thinking that imply wrongness or badness on the part of others for what they have done.”

In the book Essays on Ethics, Rabbi Jonathan Sacks points out how destructive anger can be by citing it as the reason for God denying Moses entry into the Promised Land. Moses had been angry before but that was in conjunction with moral failings of the Israelites who had been freed from slavery in Egypt. God was angry too so that was ok for Moses to be as well. It’s when he expressed his frustration at their complaints about being thirsty and he hit his staff against the rock that God forbid him from leading the people into Israel. Moses’ position as a leader and role model required more of him than to lose his cool when he became frustrated. God had decided that Moses was not the right person to lead his people into the next phase of their evolution. His angry outburst was the catalytic event for making a change at the top.

We all know how destructive anger can be and how we wish we could rewind the video so that we could act differently and erase the wake of carnage we left behind. At the extreme, anger can lead us to lose control and take actions that we can end up regretting for the rest of our lives. It can push people away and hurt relationships. As Sacks states,

“[A]nger destroys personal relationships.Short-tempered people scare others, who therefore avoid coming close to them. Anger drives out the positive emotions – forgiveness, compassion, empathy, and sensitivity. The result is that irascible people end up lonely, shunned, and disappointed. Bad-tempered people achieve nothing but their bad temper…They lose all else.”

So when you feel anger welling up deep inside it’s always good to pause, stop, reflect, breathe deeply, and ask yourself the following questions:

The goal is to create a space between stimulus and response as Viktor Frankl has taught us in Man’s Search for Meaning.

We were all happy to hear that the story ended on a very happy note. We came to learn that by managing his expectations and taking accountability for his contribution to undesirable outcomes his company’s performance improved significantly, his relationship with his kids deepened, and most wonderfully, he and his wife have reconciled and their love has deepened and the relationship has grown.

Anger can really be a great source of insight.

Have you read something in this blog that could change how you deal with anger?

One comment on “Anger - A Great Source of Insight”