Men, Women, and the Value of Doing Nothing 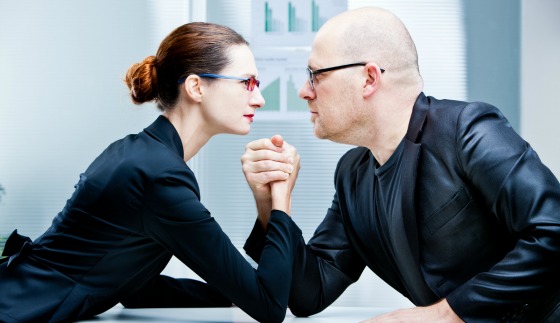 Let us put men and women together

See which one is smarter

Some say men, but I say no

The women got the men like a puppet show

It ain’t me – it’s the people that say

That the men are leading the women astray

But I say that the women today

Are smarter than the men in every way

My feminist daughter asserts that the differences between men and women are just socially induced and not inbred. I strongly disagree and she gets bugged by my beliefs which makes me want to express them more obnoxiously as, much to her chagrin, I like to see her reaction. Contrary to her beliefs, I hope to show how men and women differ and how it can often lead to women being better decision makers than men. I imagine she would not dispute the latter assertion.

Men vs. Women – Who is the Better Decision Maker?

Men have a bias towards action while women are more inclined to be reflective and feelings-driven. The latter can lead to better decisions and investment outcomes. Warren Buffett has often said,

“I could improve your ultimate financial welfare by giving you a ticket with only twenty slots in it so that you had twenty punches – representing all the investments that you got to make in a lifetime. And once you’d punched through the card, you couldn’t make any more investments at all. Under those rules, you’d really think carefully about what you did, and you’d be forced to load up on what you’d really thought about. So you’d do so much better.”

There is such tremendous value in working with constraints in life. It breeds better decision making and creativity. Investors and CEOs often violate one of John Wooden’s Cardinals of mistaking activity with results by trading too much and engaging in value-destroying acquisitions. Vast arrays of investment options with low-cost liquidity have not made investors more successful. On the contrary, it’s exacerbated the tendency to take unproductive, return hurting action. From a corporate perspective, cash has truly proven to burn a hole in one’s pockets as most acquisitions do not produce the returns management thought and tend to harm value over time. Not surprisingly, the vast majority of CEOs engaging in M&A are men.

In terms of how one would put constraints-oriented investing into practice, Charlie Munger believes the best course of action is to buy very high-quality businesses. Ideally, when purchasing them the price would be at a compelling value, but if not, it’s better to pay up for quality then to have worked hard and found something that is undervalued that may not be a great business, requires constant monitoring and determining when it is time to sell. Charlie said:

“If you buy a business just because it’s undervalued then you have to worry about selling it when it reaches its intrinsic value. That’s hard. But if you can buy a few great companies then you can sit on your ass … that’s a good thing.”

That is why I like real estate. A well-located property that is maintained should continue to be the gift that keeps on giving and it’s much easier to continue to hold it then to actively trade in and out of properties. Once you have a property you know very well and it is performing well there is a huge risk in selling it and keeping the money in cash waiting for better opportunities or reinvesting in other properties.This is particularly true if the tax consequences of selling are high.

I recently read a couple of interesting articles that speak to the value of doing nothing in certain circumstances or to be very patient when it comes to making important decisions. The first extrapolated research on penalty kicks in soccer to the world of business and investing. Approximately 90% of penalty kicks at the professional level are successful. The researchers were interested in determining the optimal strategy for goalies to maximize their chances of stopping a penalty kick. The natural inclination for goalies is to guess what the kicker will do and react accordingly. Unfortunately, this usually results in the goalie guessing wrong and the kicker being successful as the goalie is moving early with no information. The best strategy is to do nothing. According to the researchers,

“Standing still — or doing nothing — means the goalie should stop anything shot near him and would also give him the chance to react to any ball that is not perfectly struck. In fact, the research suggests that a stationary goalie would improve his save rate from a paltry 13% to a much more respectable 33%.”

The inclination to act even when it is against our best interests is called Action Bias. John Wooden preached against this years before it became so formally named when he would caution his players and coaches not to confuse activity with results. Investors often make this mistake to their severe detriment.

The second article is from Harvard Business Review and discusses how slow decision makers are more effective than those who make snap judgments. The author breaks down decision-making into four quadrants as the following table depicts. 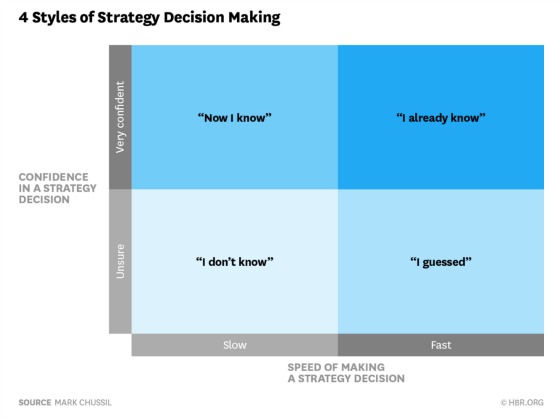 Decision makers can be broken down between Slow and Fast and Unsure and Very Confident. So what are the characteristics of the decision makers and which ones are most effective? According to the author,

In general, the I-already-knows, confident in their snap judgments, and the Now-I-knows, confident after pondering, tend to be older males. Male business students are also represented in the I-already-knows. The I-don’t-knows, unsure of their thoughtful decisions, tend to be somewhat younger. And females make up well over half of the I-don’t-knows, a much higher percentage than in the other mindsets.

Make your prediction: which of the three styles selected the best-performing Tournament strategies?

The best-performing group: the I-don’t-knows.

One place to turn is the Myers-Briggs Type Indicator (MBTI) assessment which is a psychometric questionnaire designed to measure psychological preferences in how people perceive the world and make decisions. There are eight preferences broken down into four categories of two. So for example, people fall into either being extroverted or introverted. The table below shows how men and women differ in each of the categories. Thus, if women, in general, are better decision makers than men, then we can look at the tables below and see where they differ most materially to draw inferences about what may make them so.

Not surprisingly, women are much more feeling oriented than men, who are much more thinking biased. Interestingly, women are more judgment oriented than men whereas men are more perceiving oriented. And yet, from the previous research, it would appear that when it comes to important decisions, the feeling orientation of women is more dominant than their judgment orientation such that they will take more time to make important decisions than men.

When putting all of the characteristics together, there are 16 combined categories combining the various attributes. Not surprisingly, females are far more dominant in the first two categories which involve feelings. Whether they are introverted or extroverted this is combined with being sensing, feeling, and judging.

Jack Nicholson’s character (Melvin) is asked in As Good as it Gets, how he writes women so well and he replies:

“I think of a man, and I take away reason and accountability.”

Maybe he should have added,

“And by lacking these attributes they end up being better decision makers than men.”

But maybe I’m wrong. And yet if I’m asking that I might be wrong, then maybe my decision-making process is more like a woman’s. And if this is the case then maybe everything I just wrote about is pure conjecture from an overconfident man extrapolating from only a couple of pieces of data. And yet, I am The Decider so I have to believe I’m right because that’s what men do. We decide and tell ourselves we are right and hate to admit we are wrong and change course.

It has now become more clear to me the benefits of doing nothing most of the time. This decision-making stuff is hard. I now realize how fortunate I am to have the bulk of my net worth invested in real estate. There are so few decisions I need to make and because it takes so much time and money to trade in and out of that it rarely crosses my mind to do so. And this has turned out to be a huge benefit as it has allowed me to be able to follow Buffett’s and Munger’s sage advice. I have been limited in the number of decisions I can make due to capital constraints, what I have invested in has been of high quality, and the result has been I can be paid for sitting on my derriere.

I wonder what my daughter will make of all this.

Do you agree with Ariella or with me? Did my blog change your mind? Who are the better decision makers? Men or Women?

One comment on “Men, Women, and the Value of Doing Nothing”