Inflexibility When you Need it Least 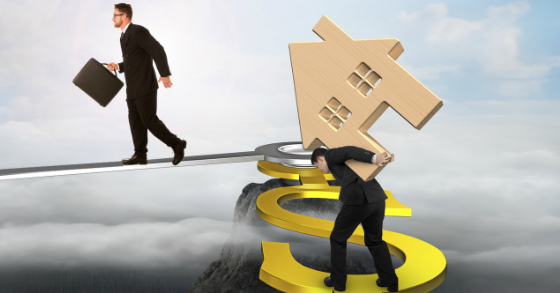 I have often made the case that apartments and home rentals are highly valuable because of the flexibility they provide people to move for whatever reason. Housing became way over-owned in the 2000s and this did great damage to our economy and society. I finally came across some interesting research that explored how damaging it was for underwater homeowners in terms of limiting their geographic flexibility to seek out employment and how this impacted their long-term earning power.

The authors analyzed nearly 4 million online job openings and then analyzed the location of the applicants by their zip code and correlated this information with how their homes changed in value during the recession. Specifically, the authors wanted to know if underwater homeowners were impacted in terms of their willingness to apply for jobs that required them to sell their homes and move. The authors wanted to further study whether homeowners with recourse mortgages were more geographically constrained than those with non-recourse loans.

The authors’ research led them to conclude that a 30% drop in home values resulted in a 15% drop in job applications submitted outside of the homeowners’ commuting areas. They instead expanded their job search within their commuting areas and cast a wider net in terms of the types of jobs applied for, particularly those offering lower pay and jobs for which they were overqualified.

“Job seekers on the side of the border with recourse mortgages pursue fewer jobs that would require relocation and apply to a broader range and lower level of positions, relative to their counterparts immediately across the border in a nonrecourse state. These effects are strongest in high-income ZIP codes experiencing significant home value declines, where we would expect homeowners to have other valuable assets and be most sensitive to recourse.”

When workers forgo applying for jobs in which their skills are most valued, they lose the opportunity to build on these skills and stretch and take on new challenges. This serves to stunt their growth and development and leads to lower short and long-term earnings which can create a less financial margin of safety and reinforce constrained mobility. Knowledge transfer can be reduced due to decreased mobility which can negatively impact productivity. There are very few positives that result from individuals being geographically constrained due to their underwater homes. It negatively impacts the individuals and does harm to our economy and society overall.

The one group of people who should not be geographically constrained are renters. The authors studied their behavior during the Great Recession as well. Interestingly, their mobility decreased as well because of how widespread the Great Recession was. Renters moved less, but not for lack of trying. They did not meaningfully reduce their job applications outside of their commuting area. They were just not able to find jobs to allow them to relocate.

The following chart estimates job openings in the United States and one can see that they dropped significantly between 2008 and 2010, corroborating the lack of job availability, even for those willing to relocate.

The following chart shows how the homeownership rate has come back in line based on historical norms.

Hopefully, we are much more in balance now and the economy will be able to function more optimally by allowing people to match their skills with positions that reward them the most highly, no matter the location.

What do you feel the impact will be on our economy? Have you invested in rental property for the reasons mentioned above?