Financier vs. Feminist - A Generational and Gender Point/Counterpoint on the Google Engineer's Manifesto 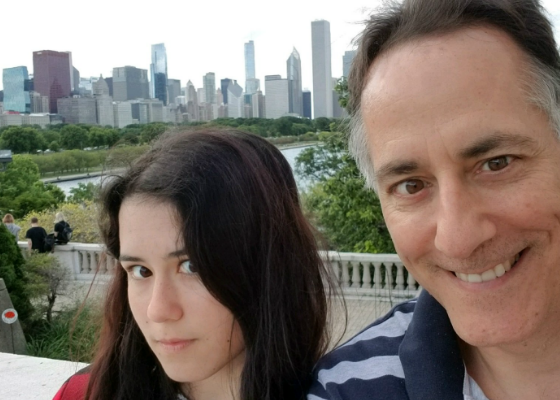 Let us put men and women together, see which one is smarter,

Some say men, but I say no, women got the men like a puppet show.

It ain’t me it’s the people that say, men are leading women astray,

I say, it’s the women today, smarter than the men in every way,

Little boy sitting in the corner and cry, big man come and ask him why,

He said “I can’t do what the big boys do”, the man sat down and he cried too.

One of my biases is that most people suffer from confirmation bias. They have their strongly held beliefs and look for ways to confirm what they believe versus seeking ways to challenge them by seeking contradictory evidence. It’s particularly acute and toxic in the realm of politics and also when it comes to social issues.

I’m wading into dangerous waters here but with all of the news about the Google employee who was fired for writing a 10-page manifesto against Google’s attempts at social engineering through its diversity programs, I thought I would share some thoughts and data. I read the manifesto and I found a lot of it that makes sense to me. I’m not sure about the solutions but I thought I would highlight some things he pointed out that resonated with me and pull in some outside data that I think may have helped his case more if he used similar data.

Because of the sensitivity of the topic, I decided to ask my daughter Ariella, who is not only our family’s staunch feminist representative, but also a noted playwright, aspiring author, and college student, to review what I wrote before sending it out to the world at large. I am highly confident you will enjoy her take on my article and the generational and gender differences will be quite stark after reading what she wrote. Since I like to save the best for last, her response will be saved for the end. She is living proof that “the power of the pen is mightier than the sword.”

Since I am a believer that most people suffer from confirmation bias, I would expect most readers to see what they want to see in this post. If you’re offended by what he wrote, then the data will be discarded or discredited and if you agreed with him then you will see the additional data as more confirmation that he was correct.

The author makes the case that Google discriminates against those with right-leaning points of view and that the diversity programs is embarking upon are pointless and counterproductive because they assume that there is bias against women with regard to engineering and other technical jobs versus asking whether their underrepresentation is a byproduct of a relative lack of interest and desire to do those jobs due to inherent biological differences between men and women. He is not saying anything about competence but solely focused on interest. He also asserts that since there is no ideological diversification at Google they are hurting the company by shunning a meaningful percentage of customers or disregarding their needs and interests.

Since ideological homogeneity is of deep concern to the author, it’s important that he describes the views of people on the left and right. These are the biases the author sees that people have based on their political affiliation.

Those seem pretty accurate to me. Take a deep breath, relax a bit, review the list, and see where you fall and then line that up with how you typically vote and then you decide if it passes the smell test. I consider myself pretty independent so I’m not surprised that I have traits that fall into both camps. The last verse in the song quoted at the beginning is a great example of someone who is left leaning. Read it again and compare it to the Left Biases above.

The author makes the case that women are underrepresented in engineering at Google because of inherent biological differences between men and women. My personal belief is that the human species is designed to perpetuate its survival. This means that it must reproduce and this biological need to reproduce creates inherent differences between men and women so they can become attracted to each other so reproduction can take place. And after reproduction, children must be nurtured, raised, fed, educated, and supported which often requires a division of labor to effectively do this. Women are unquestionably more nurturing than men. Hence more differences. If you have a left bias then perhaps you think I’m sexist and if you have a right bias then maybe pragmatic. To me, it is just what is. The author of the manifesto seems to take a similar point of view.

The author makes a number of assertions that I reproduce (pun intended) below. The last one seems a bit harsh and I would like some supporting data for it. The others seem to make sense given my experience but I would ask women, readers, to read the bullet points as objectively as possible and ask yourself if you think they’re true. Don’t ask what your feelings are telling you but ask yourself if you think they are accurate descriptions of women. And of course, my male bias is showing through by asking you to discard your feelings.

Women, on average, have more:

He then asks the following:

We always ask why we don’t see women in top leadership positions, but we never ask why we see so many men in these jobs. These positions often require long, stressful hours that may not be worth it if you want a balanced and fulfilling life.

Status is the primary metric that men are judged on[4], pushing many men into these higher paying, less satisfying jobs for the status that they entail. Note, the same forces that lead men into high pay/high-stress jobs in tech and leadership cause men to take undesirable and dangerous jobs like coal mining, garbage collection, and firefighting, and suffer 93% of work-related deaths.

Men are definitely very status-centric from my experience. Much of our self-worth is tied to what we do and the authority we wield versus who we are as holistic human beings.

Whenever I want to gain some clarity when it involves an emotional issue like gender differences and corresponding employment differences I like to turn to data. In corporate America women still, make up a relatively small percentage of the top executives. This is particularly the case for tech companies as the following chart shows.

A left bias person would chalk it up to discrimination while a right bias person would say that there are many other reasons such as women leaving the workforce to raise kids, the desire for a more balanced life, not having their entire self-worth wrapped up in their career like it is for many men, etc. And there may be some discrimination too but it’s not the entire story.

To dig down more deeply let’s look at educational statistics to see how men and women differ. The following table shows the percentage of bachelor degrees by major went to women in 2015. 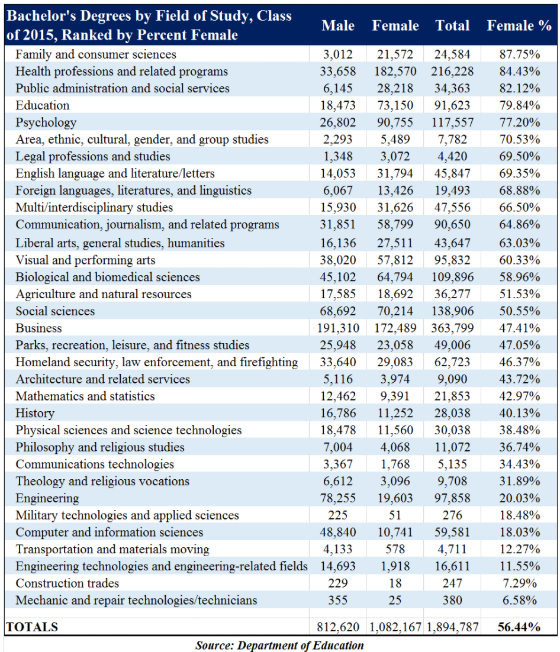 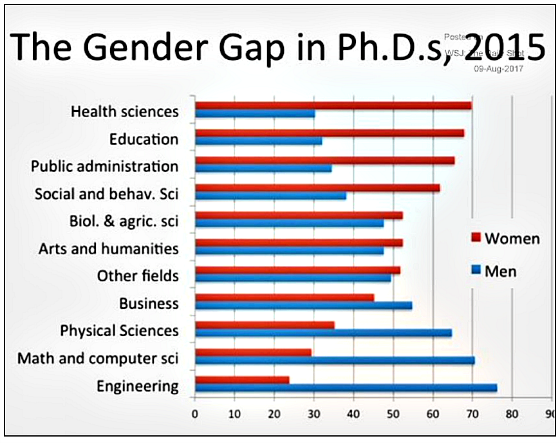 One can see there is a significant difference in certain disciplines between men and women. And not surprisingly, these differences flow through to Ph.D. programs as science-oriented undergraduates will be the most represented in these graduate programs and the same for other disciplines 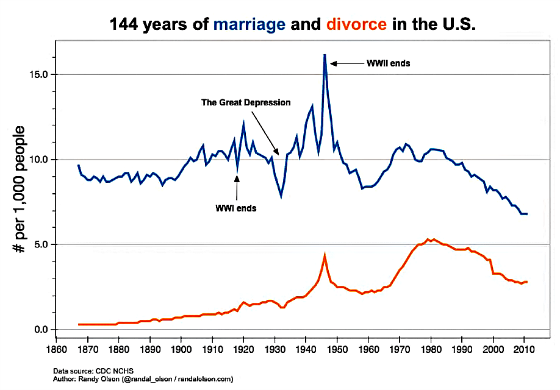 Mark Perry writes a very interesting blog for the right leaning American Enterprise Institute and, not surprisingly, he wrote about the Google uproar. I find myself agreeing with his interpretation of the data from the second chart. This is what he wrote:

I have to throw in an apartment plug here. One of our contentions is that the large and growing disparity between college-degreed women and men will have the unintended consequence of keeping the marriage rate lower than would otherwise be the case as women choose to stay single versus “marrying down” and this would be good for renting as married couples make up approximately 66% of home purchases as the following graphs show.

This is a very important and powerful trend that shows no signs of reversing. (DIGRESSION OVER)

From Perry’s crunching of the numbers, it really looks more like an engineering and computer sciences issue where women are significantly underrepresented as he observes that

Women earned about 59% of degrees in biology, which is one of the fields in the STEM area that we hear so much about in terms of female under-representation. And actually, if you include health professions as a STEM field, women earn more STEM degrees than men. Or if you count biology, mathematics, and physical sciences, women earn a majority (53%) of those degrees. It’s really only when you include engineering and computer science that men have an overall majority of STEM degrees.

I think women add tremendous value in whatever fields they want to enter, engineering and computer sciences included. I do think the manifesto author is asking the right question as to why women are underrepresented in those disciplines. Perhaps you don’t agree with his hypothesis that it stems (pun intended) from biological differences. Whatever it is, this has been a persistent trend for decades so to chalk it up entirely to discrimination is a cop out in my opinion. The next question that people should want to ponder is why there are such substantial and persistent disparities in educational and career choices between men and women within certain disciplines. I’m of the belief that these are choices being made versus self-selecting out due to fears of or experiences with discrimination or overt barriers. You may say that’s my bias, I would prefer to categorize it as my working hypothesis.

Now for the moment you’ve been waiting for: Ariella’s response to her fuddy duddy father:

Oh, Father. The big differences between men and women are not due to biology but rather condition! As de Beauvoir puts it, “One is not born, but rather becomes, a woman.” Women were once seen as docile and inherently unintellectual and thus prohibited education — but could we not trace this “inherent” quality to the lack of education itself? (Even de Beauvoir’s father proclaimed that “Simone thinks like a man!” though thinking like a man translated to thinking at all!). As such, women were empirically weaker than men, but the condition of Woman was empirically different and would seem almost absurd to us now. Our own contemporary views of women will probably seem absurd very, very soon, believe it or not.

That being said, these diversity initiatives only reinforce to us that the optimal path to success is through tech (the technocrat, as seen through Elon Musk and Mark Zuckerberg, is the undeniable future). It’s a facile way of saying, “Everyone is included at the party!” But in the same way, even our women and minority politicians are only subsumed into the modern cacophony of politics (they are just as sleazy and do little to change the system they benefit from), we are hurtling toward a tech-based future that cares little for the actual individuals that comprise it. Will it even matter who makes our latest gadget once it has come to bog down our lives like Facebook has?

So basically: it’s the system, man.

5 comments on “Financier vs. Feminist - A Generational and Gender Point/Counterpoint on the Google Engineer's Manifesto”