I Ain't No Senator's Son 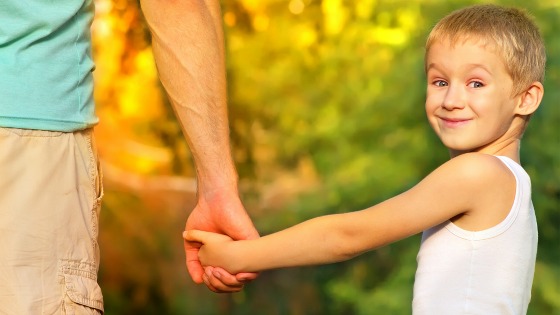 It is hard for anyone to argue that one’s parents have not been quite influential over the course of one’s life for good and bad. This is especially true for the father-son relationship. In mythology, the father often represents the duality of growth and destruction (harshness and discipline).

It is said that mothers should avoid instilling their fears in their children while fathers should avoid instilling their heartlessness. We cannot avoid being heavily influenced by our parents both genetically and behaviorally. This goes without question. Ultimately, it is up to us to use the gifts we were given by them and to overcome and shed those characteristics that do not serve us well. This is not easy to do but one that is required as part of the human maturation process.

It is one thing for us to know experientially how important our parents are in terms of who we are and the choices we make and it’s another to have hypotheses in this realm tested. I came across an interesting study from The Federal Reserve called Un-Fortunate Sons: Effects of the Vietnam Draft Lottery on the Next Generation’s Labor Market. It’s a play off of Creedence Clearwater Revival’s classic anti-Vietnam anthem called Fortunate Son in which John Fogerty rails against the privileged sons of the nation’s elite who were able to avoid going to Vietnam. Most of us know that Vietnam vets have struggled quite significantly as a whole with many having disabilities, PTSD, addiction issues, job stability problems, mental illness, and other negative consequences that have made it difficult for them to integrate effectively back into society after their return. But what about their kids, particularly sons of Vietnam draftees? What happened to them? Did they suffer as a result of their fathers being drafted away at critical points in their development? How did they do financially? Were they more or less inclined to join the military knowing that was the path their fathers took, even if the choice was involuntary?

The study tracks the sons of those who were drafted to go to war versus those who did not. Unfortunately being the son of a drafted Vietnam veteran has had a detrimental effect on the earnings and labor force participation rates than their peers. Secondly, and probably not surprisingly, they are more apt to volunteer for military service than their peers.

The authors assert that parental involvement/manipulation during critical developmental phases of their children’s lives can have a meaningful impact on the financial outcomes of their kids. In addition, there is also what the authors call an “intergenerational transmission of occupation.”

From the perspective of psychology and human development, there are some powerful reasons why the absence of fathers at important junctures in a child’s life can result in suboptimal, long-term outcomes. These years are vital in helping to form the interests and character of the child. According to Carl Jung,

“[I]n the childish state of consciousness there are as yet no problems because the child is dependent upon its parents, and the conscious differentiation from the parents normally takes place only at puberty.” But it is clear that a personal mythology has its foundations in these formative years. This period is the time when your myths were formulated and shaped. It foreordains to a large extent the archetypes that are experienced throughout life.”

Jung is pointing out how important parents are prior to puberty because of the dependence children have upon them until they can differentiate their own identities. When a parent is removed from that vital role at such an important part of a child’s development, there are bound to be consequences, most of which are negative. He may not always have someone loving and safe he can depend upon when the father is gone. Without the father around, the child may be exposed to less discipline and self-reliance in the context of a safe environment. The study seems to confirm that sons were less inclined to work as hard as peers without fathers drafted in Vietnam and they tended to follow their fathers into the military.

“The effects of the Vietnam draft persisted into the next generation. In this study, we have

serve in the military between 1999 and 2013. The earnings losses are due not only to reduced

The authors believe that the negative earnings effects are a product of slightly lower educational attainment as well as lower labor force participation. In addition, as mentioned above, there is a higher probability that sons will follow their fathers into the military.

“More generally, family appears to have played important roles in both the transmission of

development of long-term human capital in our setting, such that we might expect the

historically determined differences we detect to persist for some time (Altonji and Blank, 1999).

Thus, our results speak broadly to socioeconomic mobility and different mechanisms by which

inequities may persist across generations.”

While I cannot draw a direct line between this topic and investing, what I would say is that we all have blindspots, compulsions, insecurities, and counterproductive reaction tendencies that are often the byproduct of our DNA, environment growing up, and how life was modeled for us by our parents. If we are to grow and learn how to be more reflective, better balanced, and satisfied human beings versus impulsive, self-destructive, ill at ease reaction machines we have to come to terms with those who helped bring us to the dance (our parents, and for sons, particularly their fathers) and slay those demons to the extent that they have a negative hold over us. As Joseph Campbell said, it is not just an atonement with the father that needs to occur, it is an At-One-Ment. By reconciling with the father we can progress to the next stage of maturation in our own personal journeys. This integration, enhanced self-awareness, and a more reflective way of living are characteristics that can only help serve investors by cultivating more independent thinking and lessening the chances of emotion-driven mistakes leading to a permanent loss of capital.

It’s been said that we change our personal myths by altering the stories we tell ourselves. The past can be reinterpreted. We can transform it into something of great benefit and strength to us as opposed to one that is fixed, unchanging, and quite debilitating. Ultimately, no matter how much our parents or grandparents have sinned against us the true adult is one who can ultimately accept these sins as his own condition which has to be dealt with. Like Job, he will naturally ask why him and why should he have to be the downstream recipient of the family sewer flow? According to Jung, he will ultimately have to look into his own heart for the answer and come to realize that suffering is part of the human condition. There is no avoiding it. All we can do is integrate it in the most healthy, compassionate, and understanding way possible. We are our parents and yet we are not them.

As I wrap up this piece and bring it full circle to Fortunate Son I realize the power of writing and letting the journey unfold in spontaneous and unexpected ways. I now realize that John Fogerty may have meant something very different than I have thought all these years. Rather than railing on how unfair economic and social inequality may be when it comes to life and death decisions about who is shipped off to war, let alone a very questionable war at that, perhaps he was conveying an even deeper, more personal truth.  Maybe John Fogerty really meant that no, I’m not a Senator’s son, and I am damned proud of it even if it means that I may have to go to Vietnam and you don’t because there is no way in hell I would want to have the life you do with the parents you have. Mine may not be as rich as yours and offer me the same advantages in life but they are my parents, flaws and all, and I love them, and they helped make me who I am. I will use the gifts they gave me and integrate the shortcomings and learn from them so I can avoid the same mistakes they made. And taking what I have learned from them I will do my best to raise my children, particularly my son, to be individuals of character who take responsibility for their actions and try to have a positive influence in ways that leave the world slightly better off than they found it each and every day.

If you are a parent, what have you learned from this article to help you raise your children as people of character?

2 comments on “I Ain't No Senator's Son”