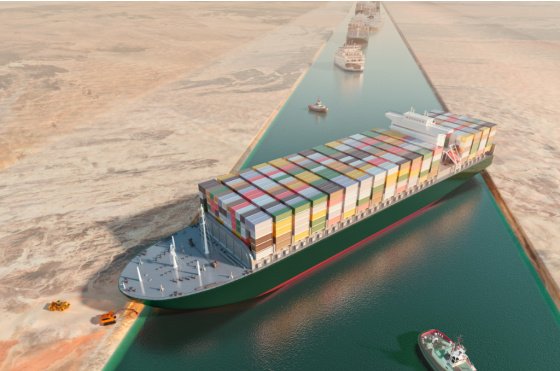 [UPDATE] 3:00 PM Egypt – 6 AM PST the Ever Given was refloated and is on the move again. Credit is given to the full moon bringing the spring higher tides, 14 tug boats, and the 27,000 meters of sand removed. The following was written prior to this news. What is the impact of a stuck ship 7,592 miles away?

The Ever Given is one of the largest container ships ever built and it is now blocking the vitally important Suez Canal after losing control of its steering in difficult conditions. It is blocking the flow of an estimated $12 billion in goods.

Many ships may have to re-route through the Horn of Africa. This will take much longer to complete their trips which not only makes it more expensive because of fuel costs, rental rates, labor, etc., but they also face the added risk of piracy.

In short, it’s a big mess and this situation is the perfect representation of the immense challenges facing global supply chains. 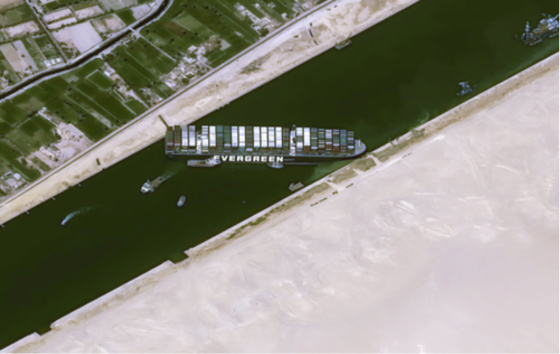 The Suez Canal isn’t the only shipping artery facing problems. There is also a huge backlog of ships outside of many ports, particularly in Long Beach and Los Angeles, as the following picture shows. 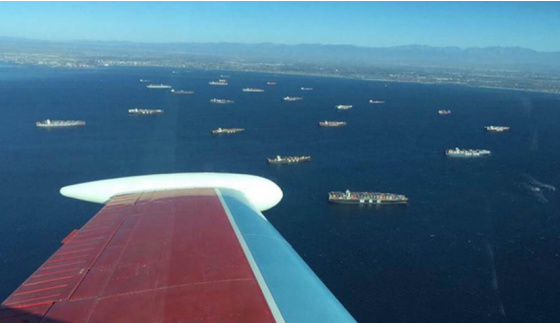 As a real estate investor, this is a mouth-watering chart because if rents went up like this for our CWS investments we would be very pleased. In addition, based on supply constraints that I will discuss shortly, it would appear that the growing supply/demand imbalance is something every real estate investor would love to have in their product type. 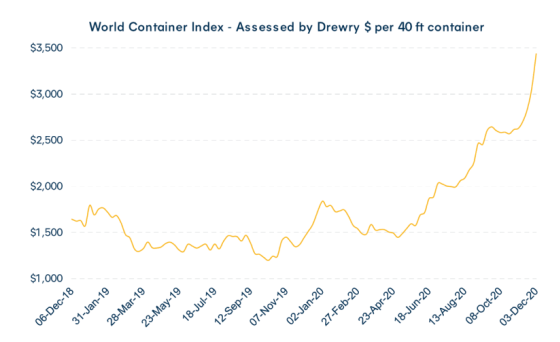 How Did We Get Here? Pandemic

Before we address the outlook, however, let’s first take a step back and ask how did we get here? I found the following to be a good explanation for the forces that came together to create such a supply and demand imbalance.

As the pandemic spread out from its Asian epicenter, countries implemented lockdowns, halting economic movements and production. Many factories closed temporarily, causing large numbers of containers to be stopped at ports. To stabilize costs and the erosion of ocean rates, carriers reduced the number of vessels out at sea. Not only did this put the brakes on import and export, but it also meant empty containers were not picked up. This was especially significant for Asian traders, who couldn’t retrieve empty containers from North America.

Then, a unique scenario developed. Asia, being the first hit by the pandemic, was also the first to recover. So while China resumed exports earlier than the rest of the world, other nations were (and still are) dealing with restrictions, a reduced workforce, and minimal production.

A consequence of this is that almost all of the remaining containers in Asia headed out to Europe and North America, but those containers did not come back quickly enough. Massive workforce disruptions due to coronavirus restrictions in North America affected not only ports but cargo depots all across the country as well as inland transport lines. Without adequate staffing, containers started to pile up. As borders tightened, customs became more complicated to clear as well, worsening congestion. In addition, there were rapid shifts in trade lane demands that were challenging for carriers to adapt to.

There was no time to clear the very large backlog of containers with limited workers before more started arriving. North America currently faces a 40% imbalance; which means that for every 100 containers that arrive only 40 are exported. 60 out of every 100 containers continue to accumulate, which is a staggering figure considering China to USA trade route sustains on average 900,000 TEUs per month. That’s during a normal year; the current shipping volume is at record highs this quarter (up 23.3% compared to last year, according to Descartes Datamyne)

And just when the financial incentives are quite high to create more container fleets, the supply is actually quite constrained with more ships being scrapped than built-in 2020 and the amount of container inventory is rapidly shrinking as well. This positions shippers to continue to have strong pricing power to rent out their container ships as well as owners of containers to be able to obtain even higher rental rates for the next few years assuming no material drop in demand. 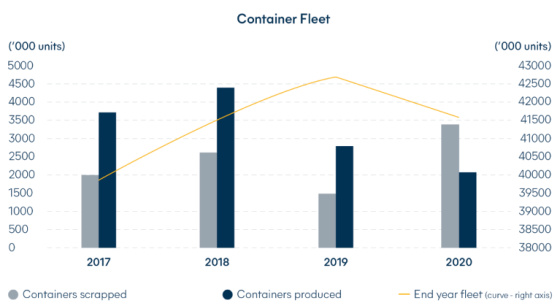 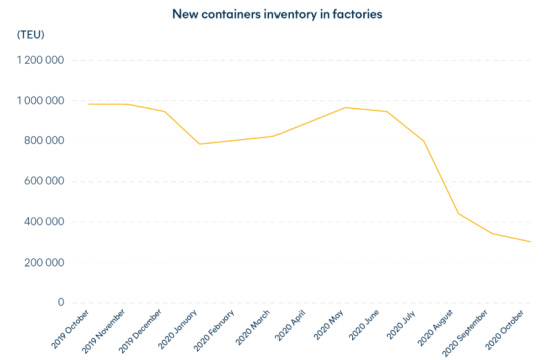 The rapid recovery in durable goods (a proxy for trade) relative to the last recession, as shown in this graph, represents how caught off guard shippers, and other parts of the supply chain, were. 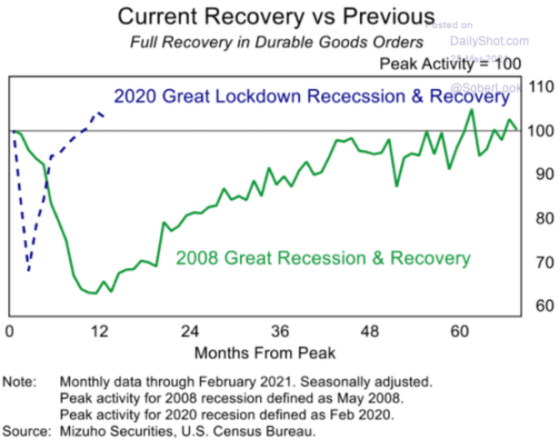 The bottlenecks have caused a tremendous slow down in supplier delivery times. 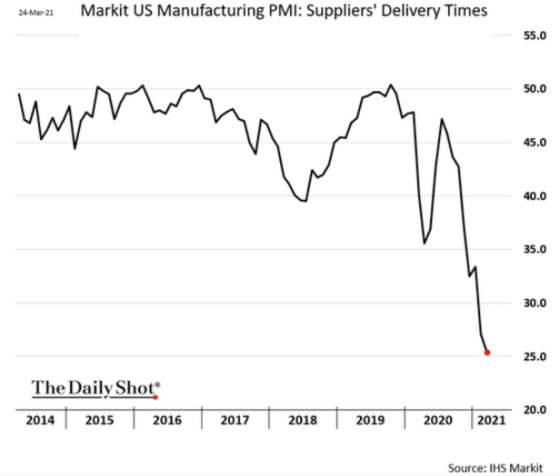 It looks like it’s only going to get worse as the backlog of business is growing as well. 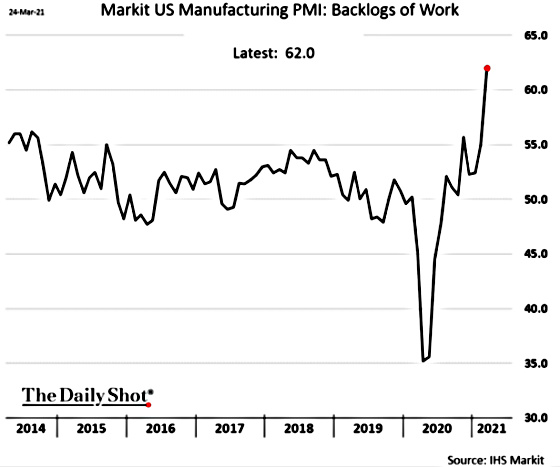 This has led to higher input prices for manufacturers and their customers as they are able to pass some or all of their costs on. 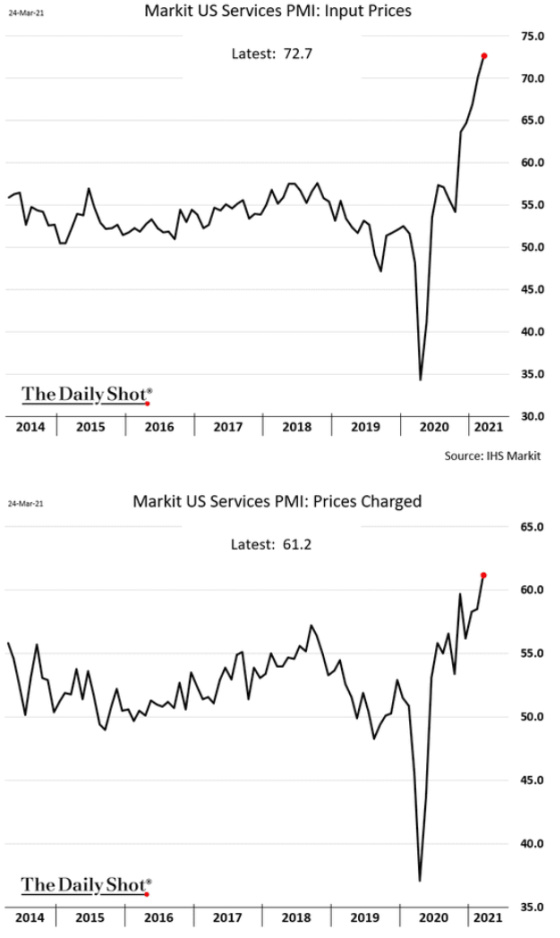 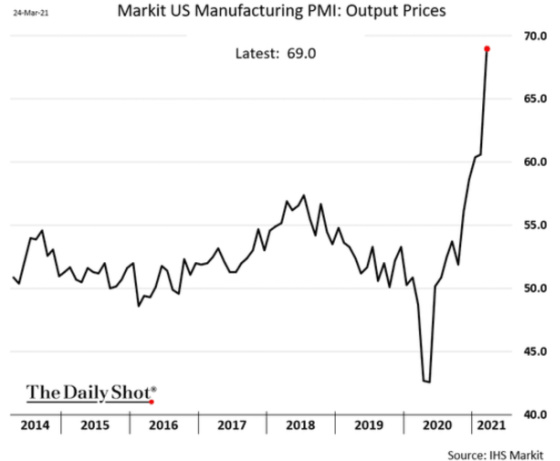 And if this were not problematic enough, the world is also facing a critical shortage of semiconductors. This is particularly impacting automakers. This is how Bloomberg described the situation.

Automakers the world over have expanded and extended production cuts that first began in late December to cope with a worsening global shortage of semiconductors. The coronavirus pandemic caused a surge in chip orders that are needed for smartphones, TVs, and computers as people try to make extended life at home more bearable, leaving less capacity for a stronger-than-expected rebound in vehicle demand.

Recent weather-related disruptions of petrochemical supplies in the southern U.S. and a fire at a chipmaking plant in Japan have exacerbated the shutdowns.

Historically this would be a set of conditions that would lead the Fed to increase interest rates to slow down the economy to get supply and demand more in balance.

So why is the Federal Reserve not raising interest rates?

I think this chart shows why. The Fed is very focused on not letting the bottom rungs of the economic ladder stay thereby ignoring their plight in terms of resigning itself to their lost jobs being permanent as well as the associated lost wages. 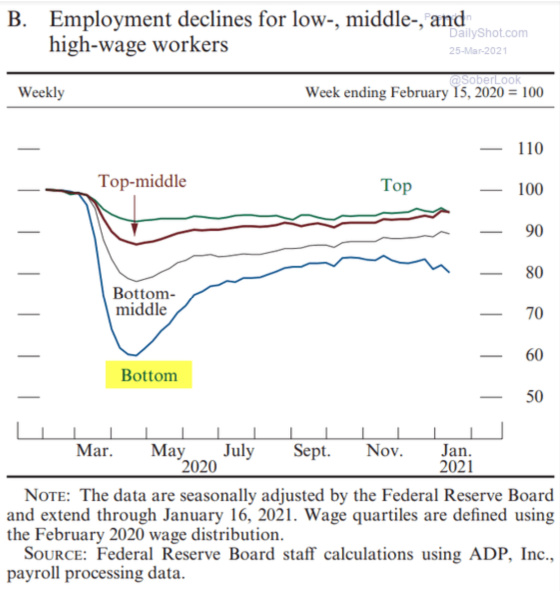 In the past when the economy would run hot and inflation would rise the Fed would raise interest rates to cool off the economy. But is that what we want the Fed to do now? There are huge incentives for capital to form to help firms and entrepreneurs find solutions to these bottlenecks. Rather than slowing things down by raising rates and potentially choking off a labor market recovery that might be able to elevate the most vulnerable parts of society, I don’t see why it can’t let the economy run hot and allow for the innovators and suppliers of capital to find creative ways to continue to have our economy adapt. If it takes people longer to get their goods, so be it. And if prices rise to the point that it chokes off demand then market forces are helping with the problem versus the Fed using a blunt instrument like interest rates to do so when it’s hard to know what the unintended consequences may be.

Since the Fed sees inflation as being more of a short to medium-term issue, it will not raise rates until the labor market is healed. In addition, I don’t believe the Fed thinks the long-term growth rate of the economy is accelerating due to demographic factors and productivity trends. As a result, they don’t see a need to increase rates to reflect a faster-growing economy and corresponding higher returns on capital. Once again, all roads lead to the labor market and wage gains.

Finally, I will leave you with this chart which shows how 30-year bond investors are positioned aggressively for rates to go higher. If history is any guide, then interest rates could be positioned to go lower. 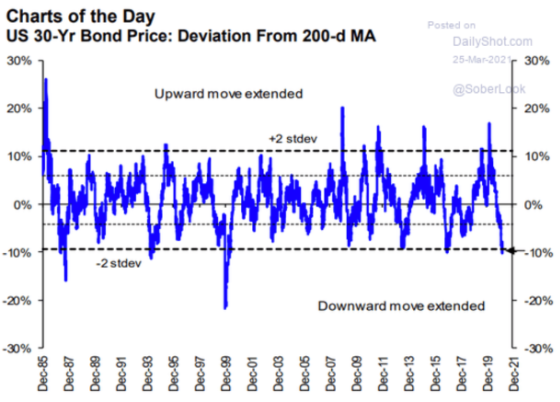 2 comments on “Stuck Ships and Chips”